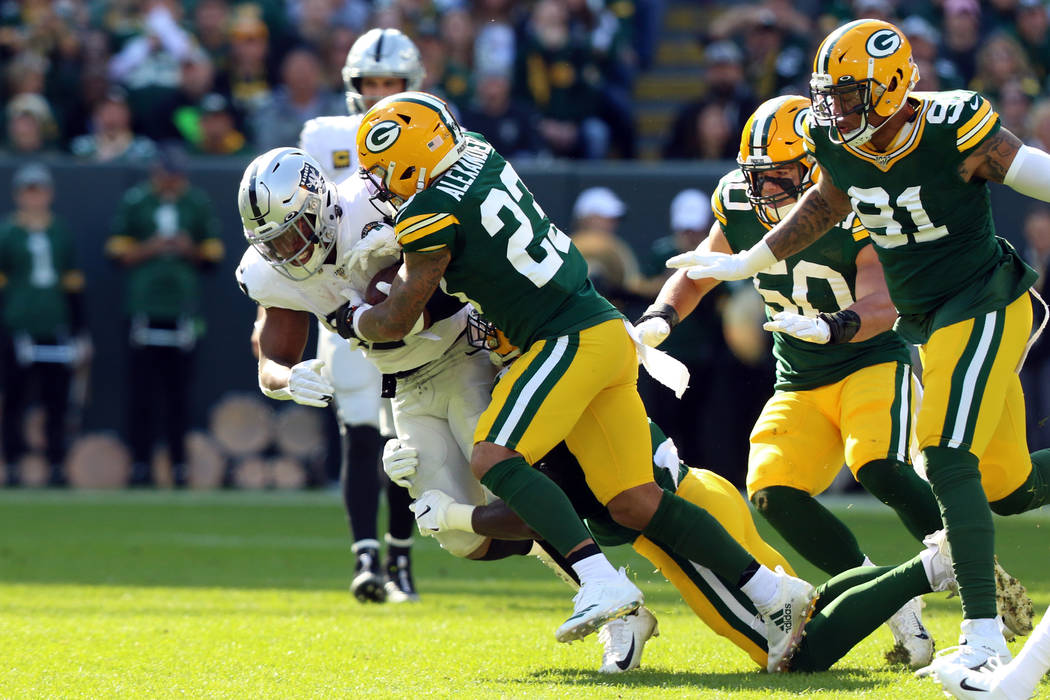 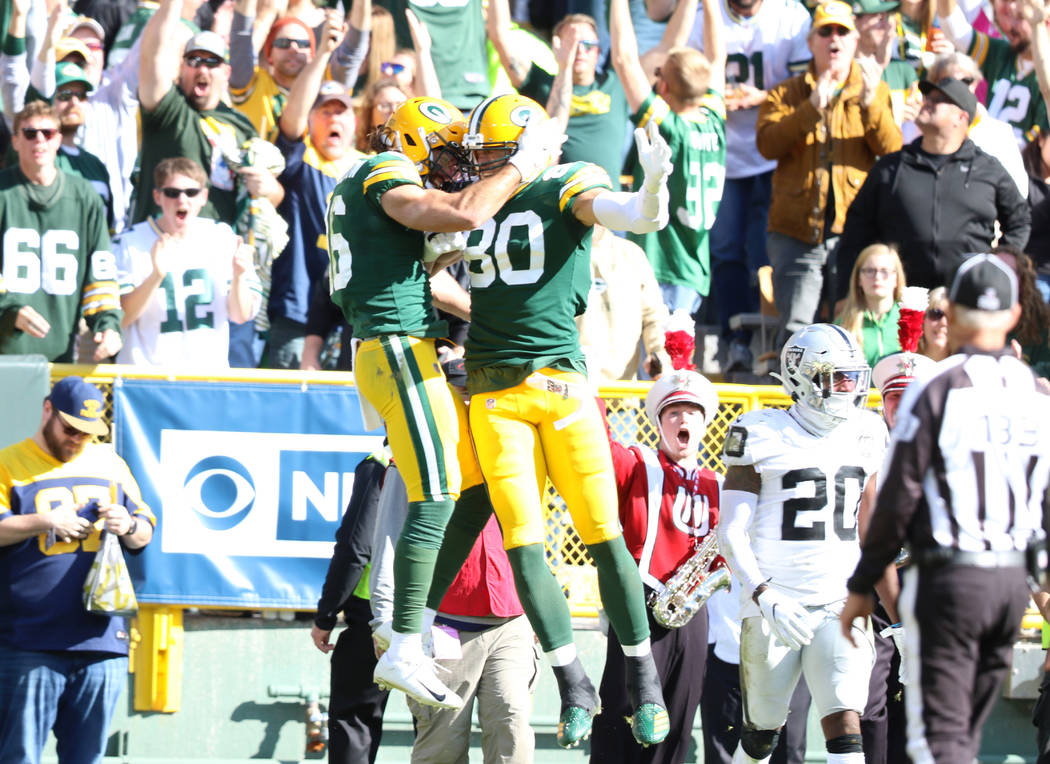 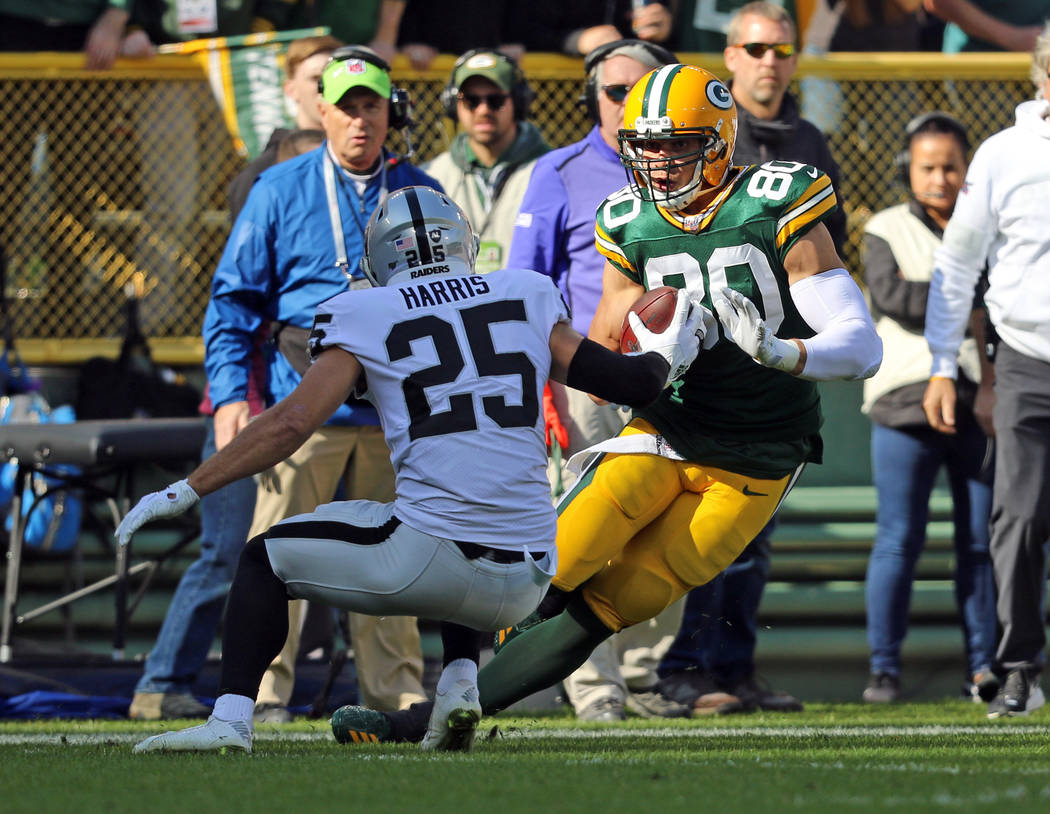 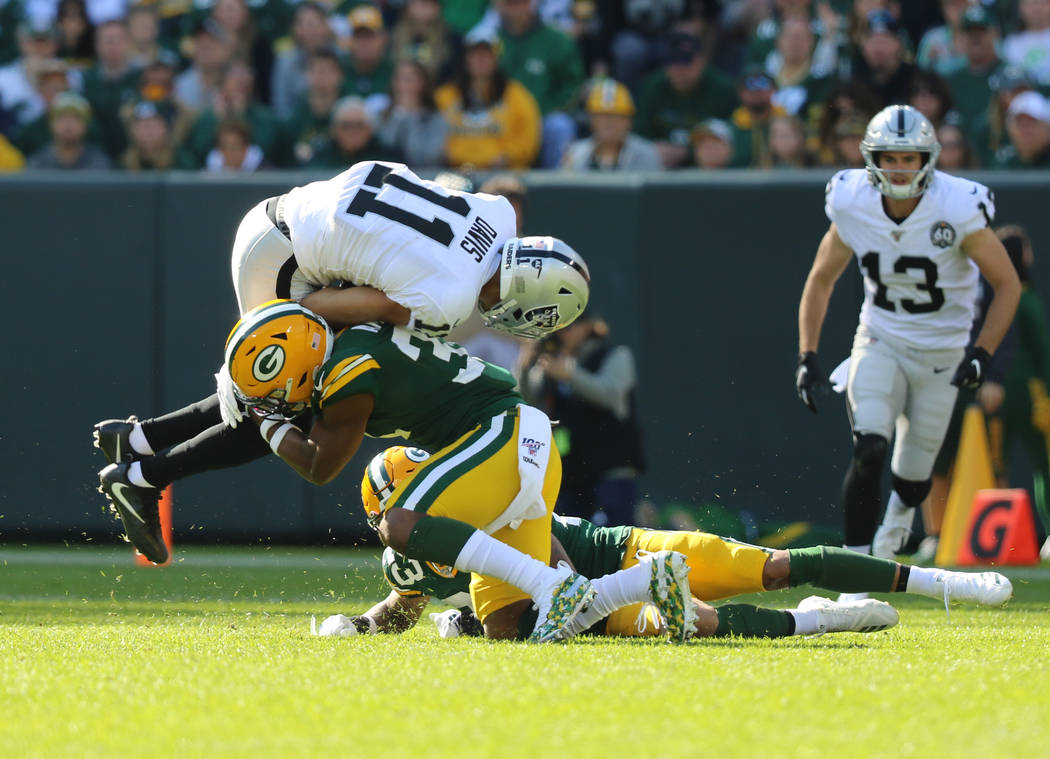 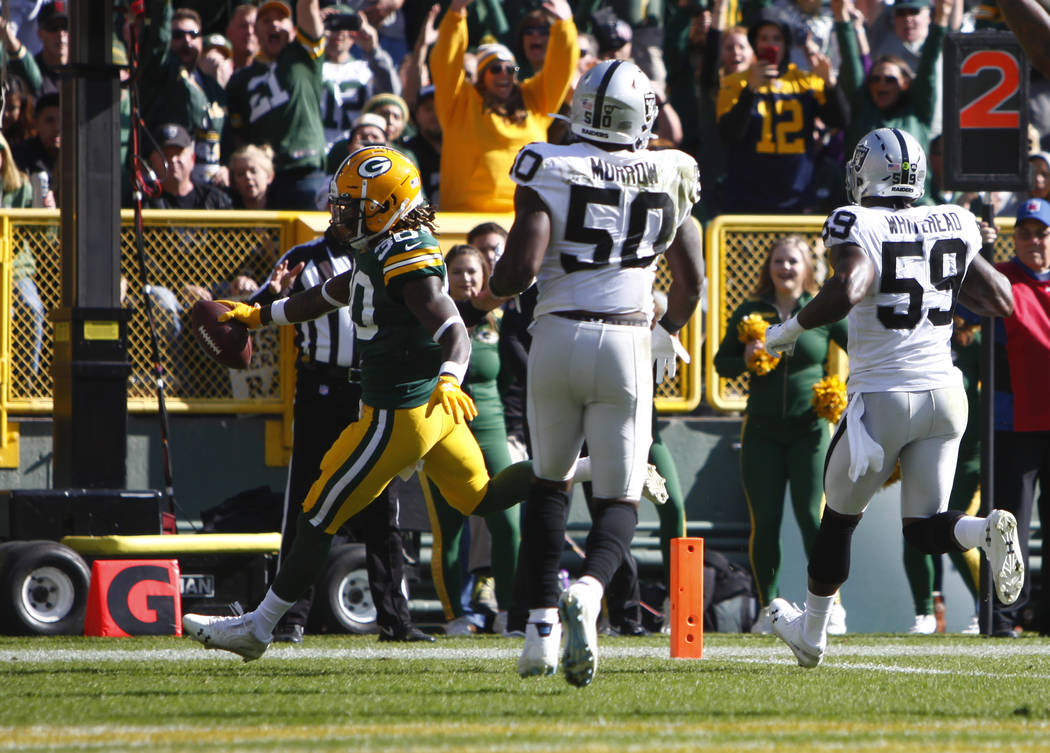 Green Bay Packers running back Jamaal Williams (30) runs in to the end zone as Oakland Raiders linebacker Nicholas Morrow (50) and outside linebacker Tahir Whitehead (59) look on during the first half of an NFL game at Lambeau Field in Green Bay, Wis., Sunday, Oct. 20, 2019. (Heidi Fang /Las Vegas Review-Journal) @HeidiFang 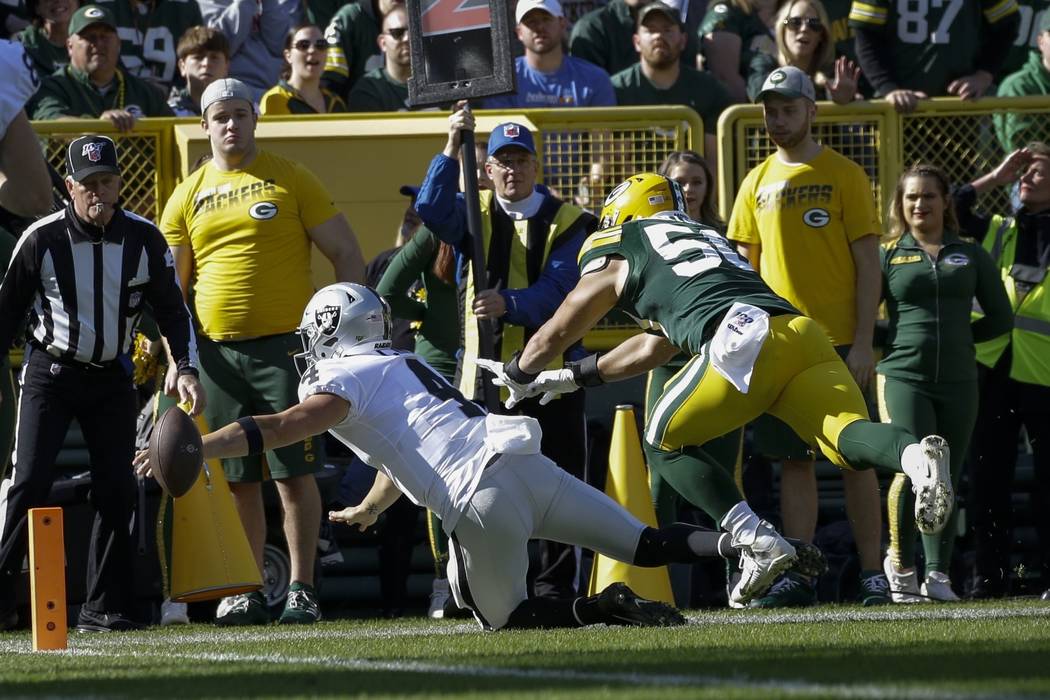 Oakland Raiders' Derek Carr loses the ball as he reaches for the end zone during the first half of an NFL football game against the Green Bay Packers Sunday, Oct. 20, 2019, in Green Bay, Wis. (AP Photo/Jeffrey Phelps) 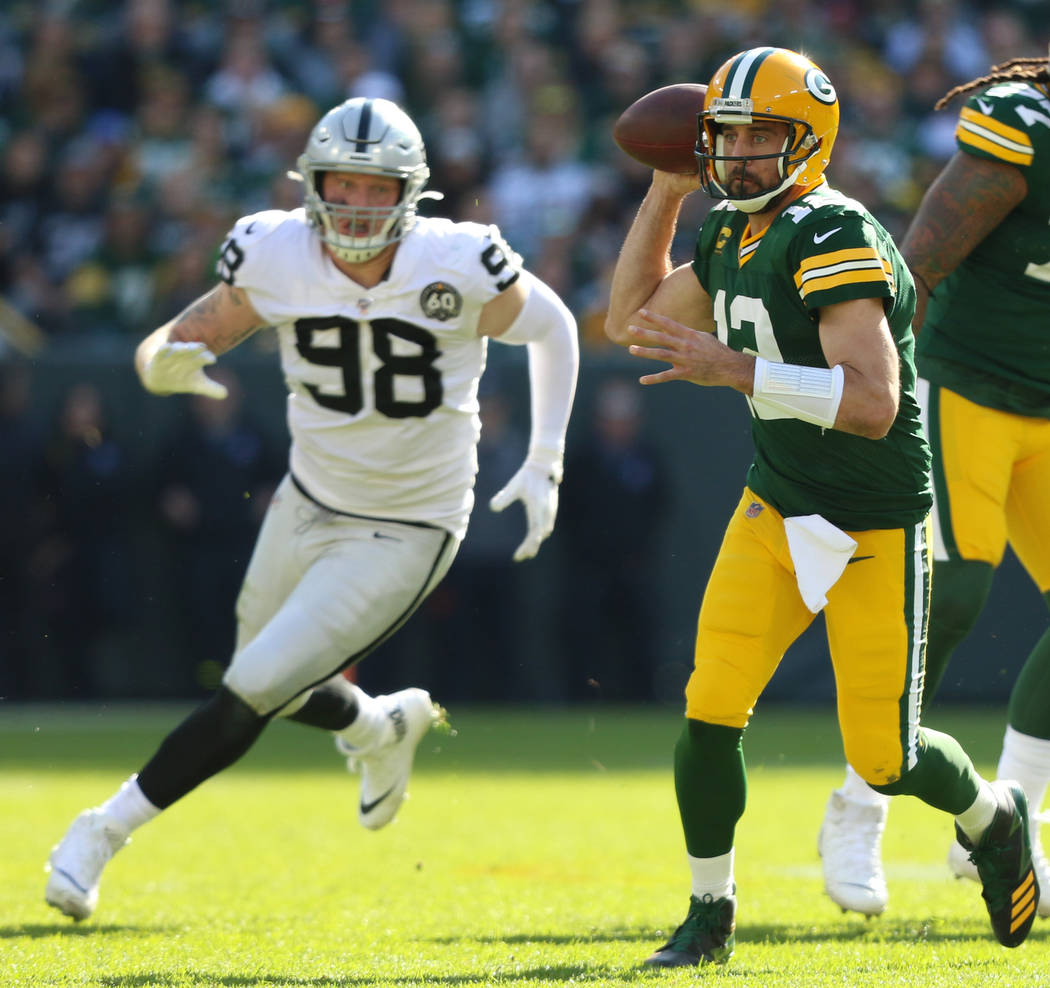 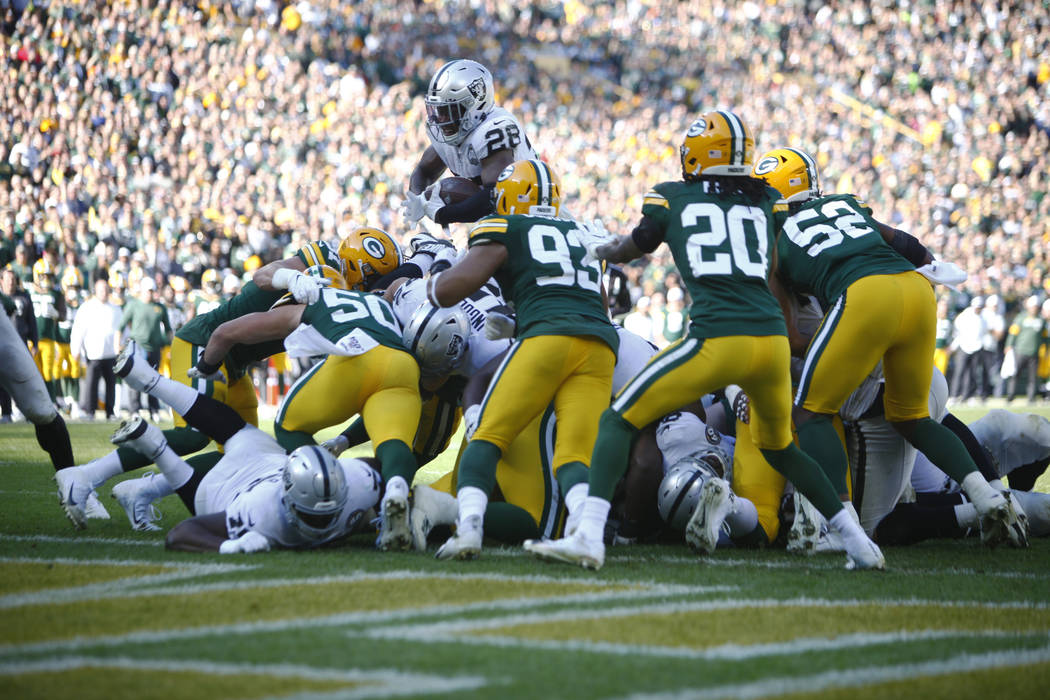 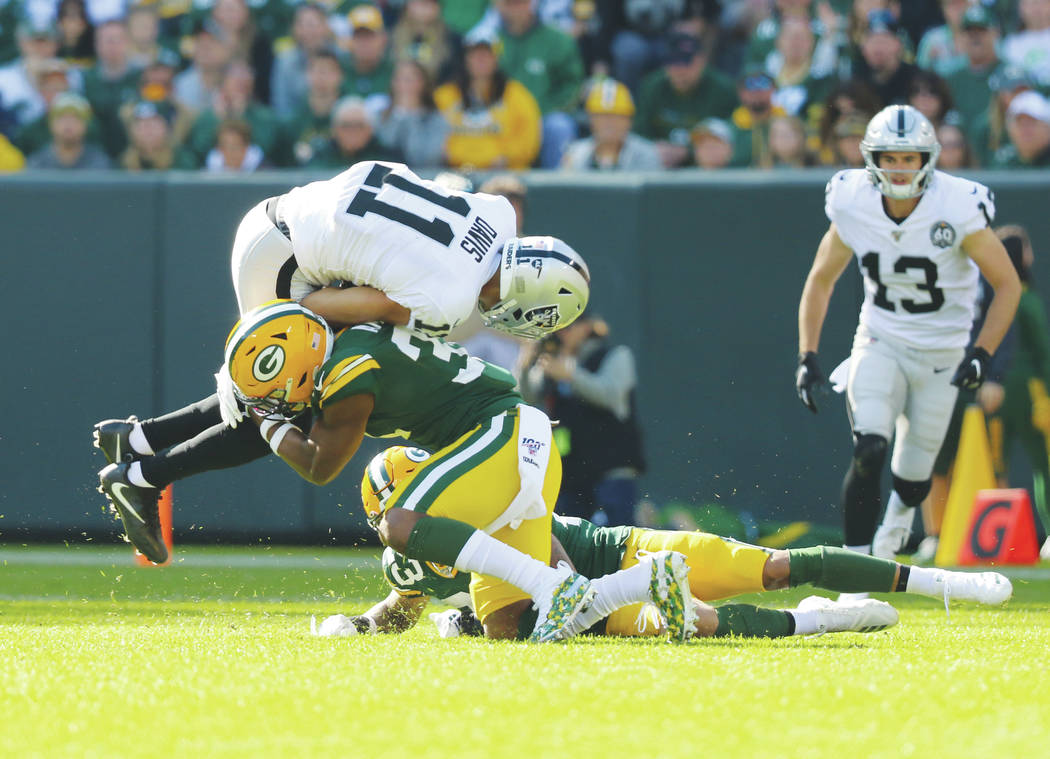 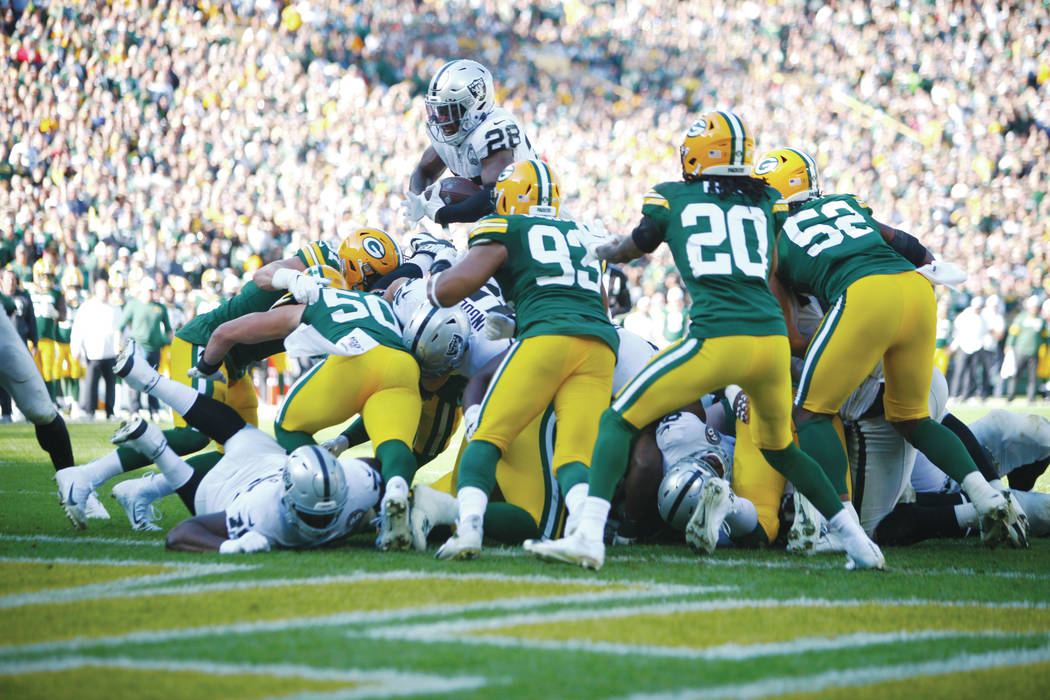 GREEN BAY, Wis. — A critical turnover by Derek Carr at the end of the first half Sunday was the beginning of the end for the Raiders, who fell 42-24 to a red-hot Aaron Rodgers and the Green Bay Packers.

The Raiders held 3-0 and 10-7 leads in the first half, and had the ball at the Green Bay 2-yard line trailing 14-10 just before halftime. But quarterback Carr fumbled while attempting to stretch the ball across the goal line on a scramble. The ball fell out of bounds in the end zone, resulting in a touchback for the Packers.

Green Bay then used a seven-play drive to score a touchdown with just 12 seconds left in the half to take a 21-10 lead.

In the second half, the Packers got started with a 59-yard deep ball from quarterback Aaron Rodgers to wide receiver Marquez Valdes-Scantling. A few plays later, Rodgers scored on a 3-yard run to give the Packers a 28-10 advantage, a deficit that would prove to be too large for the Raiders to overcome.

Tight end Darren Waller excelled in defeat, scoring his first two touchdowns as a Raider in the second half. But the Packers put up three touchdowns in the game’s final 30 minutes to maintain their commanding lead.

With the loss the Raiders fell to 3-3. The Packers improved to 6-1.

Here are three takeaways from the contest:

When Carr was walking back to the sideline after his costly fumble went out of the end zone for a touchback, he remembered making the same mistake before.

In the Raiders’ 20-17 Week 15 loss to the Cowboys in 2017, a nearly identical play cost the Raiders a shot at at least tying the game with about 30 seconds left in the fourth quarter. On third-and-3 from Dallas’ 8-yard line, Carr scrambled to his right, stretched the football out toward the front-right pylon, but fumbled as he went out of bounds.

As it happened on Sunday, that play resulted in a touchback.

Carr said after the game that in both plays, he was acting as a competitor.

“It’s so hard not to try,” Carr said. “That’s everything I’ve ever been about my entire life, is to try.”

But in the end, Carr said, he’s learned the lesson that he needs to at least extend the ball with two hands in that situation.

“Trying to extend with one hand isn’t smart. That’s stupid,” Carr said. “It’s my fault. I let my team down on that.”

It was a clear turning point, as the Packers scored touchdowns on their next two possessions go up by 18.

The Raiders were able to move the ball offensively, racking up 484 yards and finishing 7-of-11 on third down.

But the club came away scoreless on three of its red zone possessions, which was a clear contributor to the lopsided loss.

Carr’s fumble that resulted in a touchback was the first scoreless trip. That was followed by running back Josh Jacobs being denied a leaping touchdown on fourth-and-goal from the 1-yard line. Then Carr threw an interception in the end zone on first-and-10 from the Packers 15 on the Raiders’ next drive.

“When we get down there, we’ve got to finish those drives,” Carr said.

“If you look at the number, it was like video-game numbers for both teams,” Jacobs said. “And they just executed on a couple plays and we didn’t, so that was the biggest thing.”

This is much the same for every team in the NFL, but it’s especially true for the Raiders: As a team, they cannot come away with zero points in three red-zone trips and expect to win.

Jacobs has been a revelation at running back. So has Darren Waller at tight end. Fellow tight ends Foster Moreau and Derek Carrier have made quality plays. But the Raiders need to get more out of the rest of their offensive skill players.

The Raiders can certainly be successful spreading the ball around — 10 players had a reception Sunday. But the club needs another strong outside target, especially if Williams’ foot injury continues to prevent him from playing.