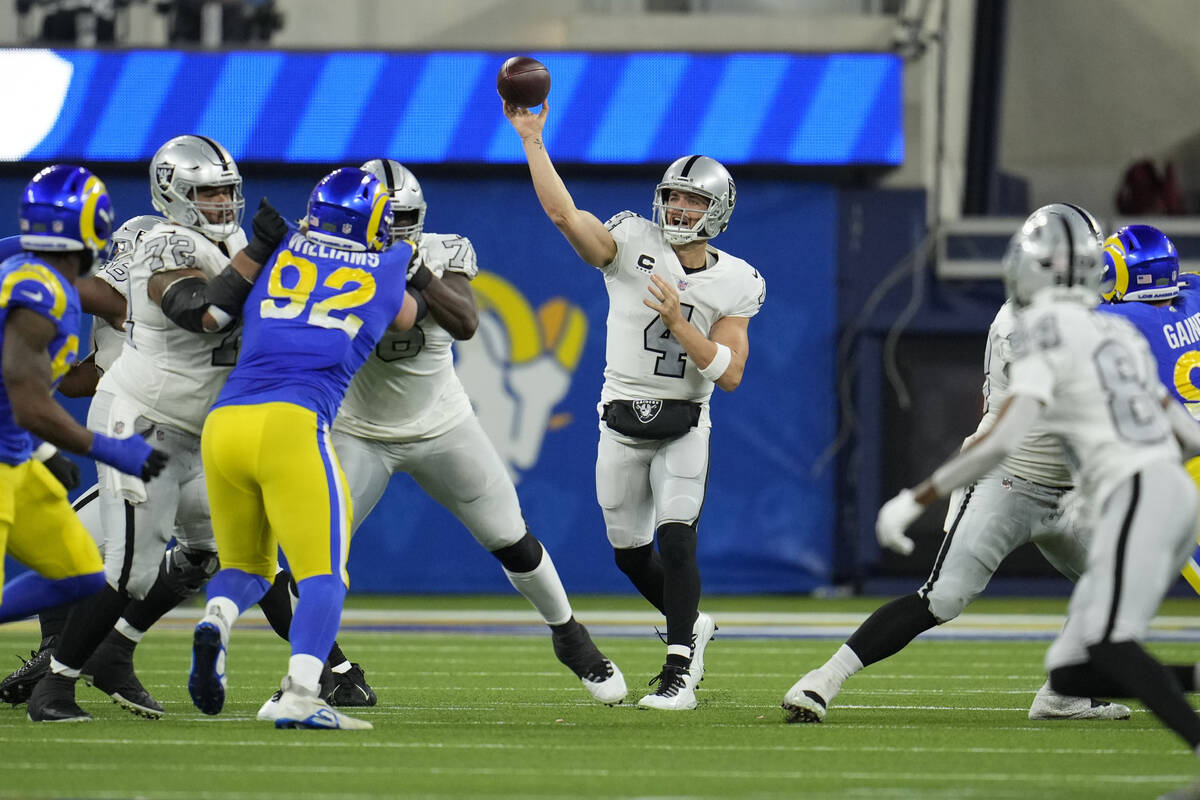 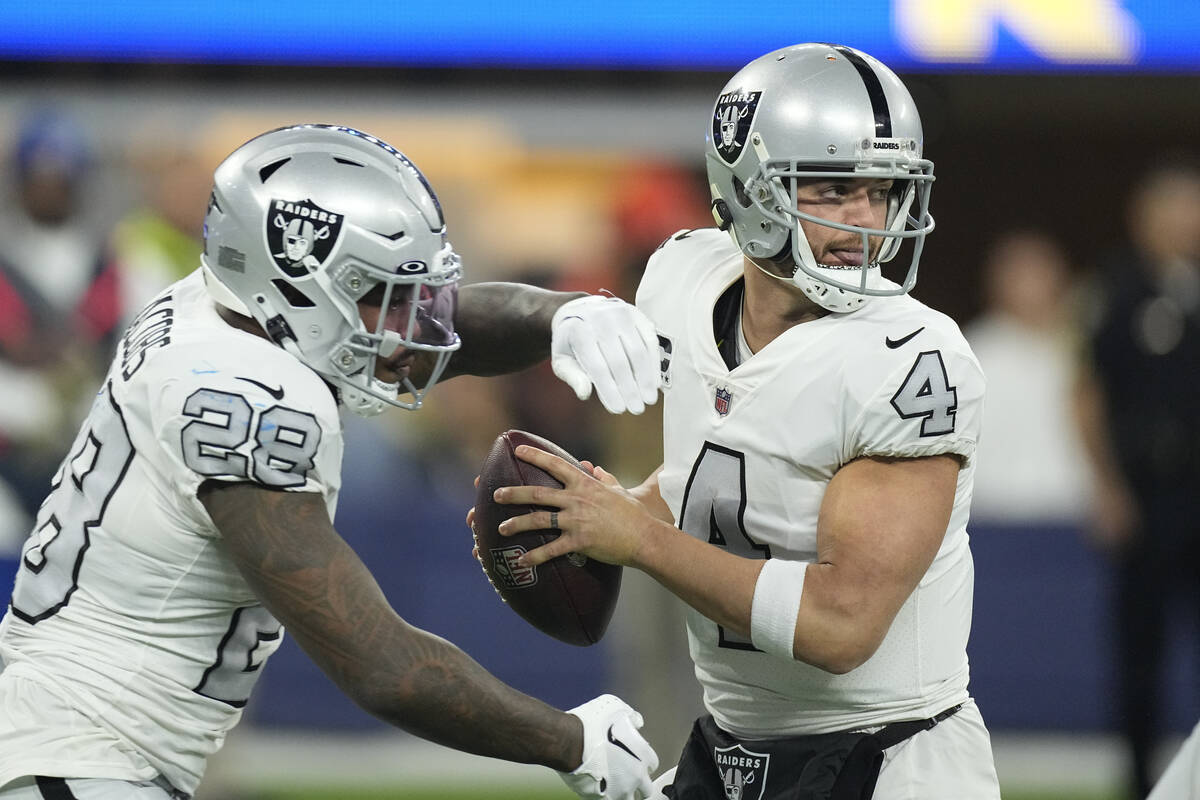 Las Vegas Raiders quarterback Derek Carr drops back as running back Josh Jacobs gets ready for a handoff during the first half of an NFL football game against the Los Angeles Rams, Thursday, Dec. 8, 2022, in Inglewood, Calif. (AP Photo/Mark J. Terrill) 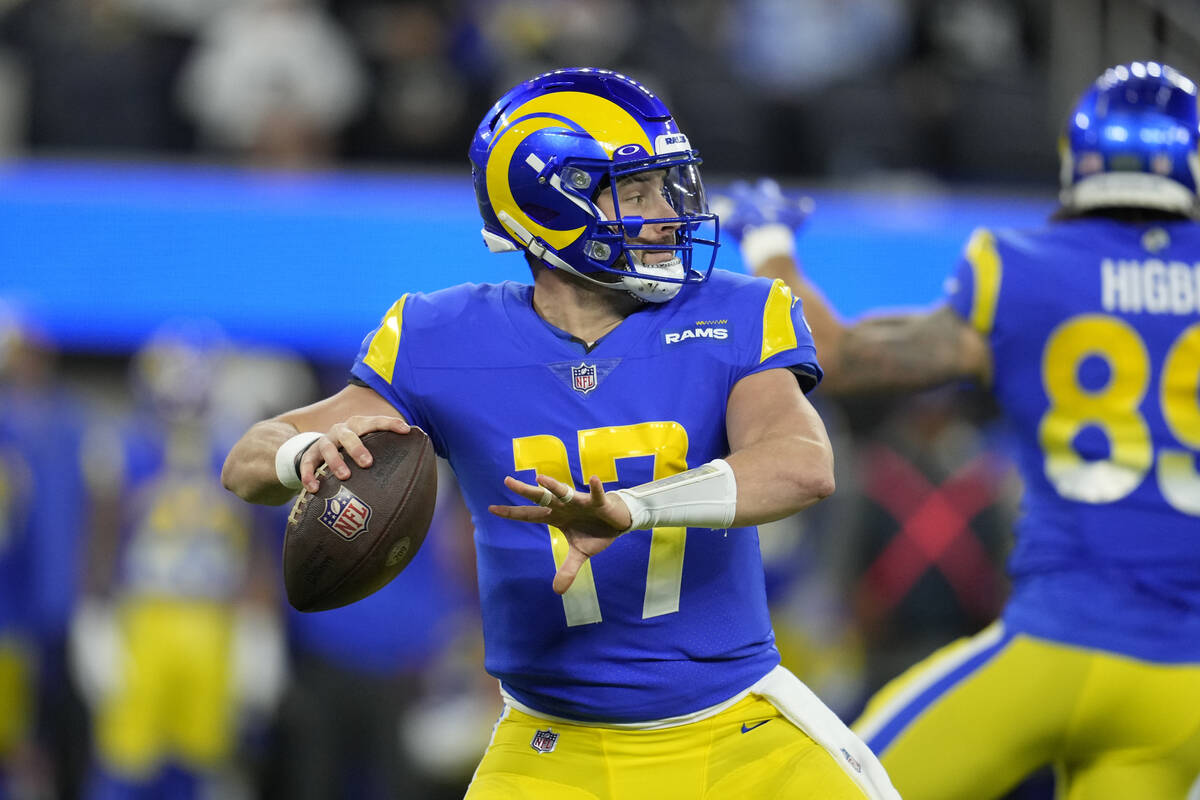 How the Raiders performed in a 17-16 loss against the Rams.

On a night when the Raiders managed just three points after halftime, Derek Carr completed only 11-of-20 for 137 yards and threw two interceptions. One came in the end zone near the end of the first half and the other on the team’s final play on a desperation heave. The Raiders were 1-of-4 in the red zone and 5-of-13 on third down. They had three three-and-outs among their second-half drives. Josh Jacobs rushed 27 times for 99 yards and a score, playing much of the second half with an injured finger. The Raiders managed 302 total yards via 58 snaps. Davante Adams had three receptions for 71 yards. No other receiver had more than two catches.

What a terrible, forgettable, classic collapse. The Raiders allowed a quarterback (Baker Mayfield) who just got into town and had a day to learn the playbook a 98-yard scoring drive over the final 1:45 to steal the game. It culminated with a 23-yard scoring strike from Mayfield to Van Jefferson, who beat Sam Webb on the game’s biggest play. Mayfield would complete 22-of-35 for 230 yards and the game-winning score in his Rams’ debut. A week after totaling three sacks against the Chargers, Chandler Jones caused a fumble — the 34th of his career, most of any active player — and recovered it as well for the Raiders. Nate Hobbs led the team with nine tackles. The Raiders totaled four sacks.

Daniel Carlson did his part again, making good on field-goal attempts from 52, 31 and 36 yards. But what should have been the play of the night went for naught when punter AJ Cole boomed a 64-yarder that was downed at the Rams’ 2-yard line with 1:45 remaining. We know what happened next. Lunacy.

There is no other deserving grade to assign with such a horrible defeat. The clock management at the end of the first half left something to be desired — a drive that culminated with Carr’s interception in the end zone. The Raiders couldn’t get anything going offensively all night and the final defensive stand was anything but. To allow Mayfield that sort of ending when he literally just got off a plane is beyond inexcusable.

5
Raiders rank among most popular in merchandise sales