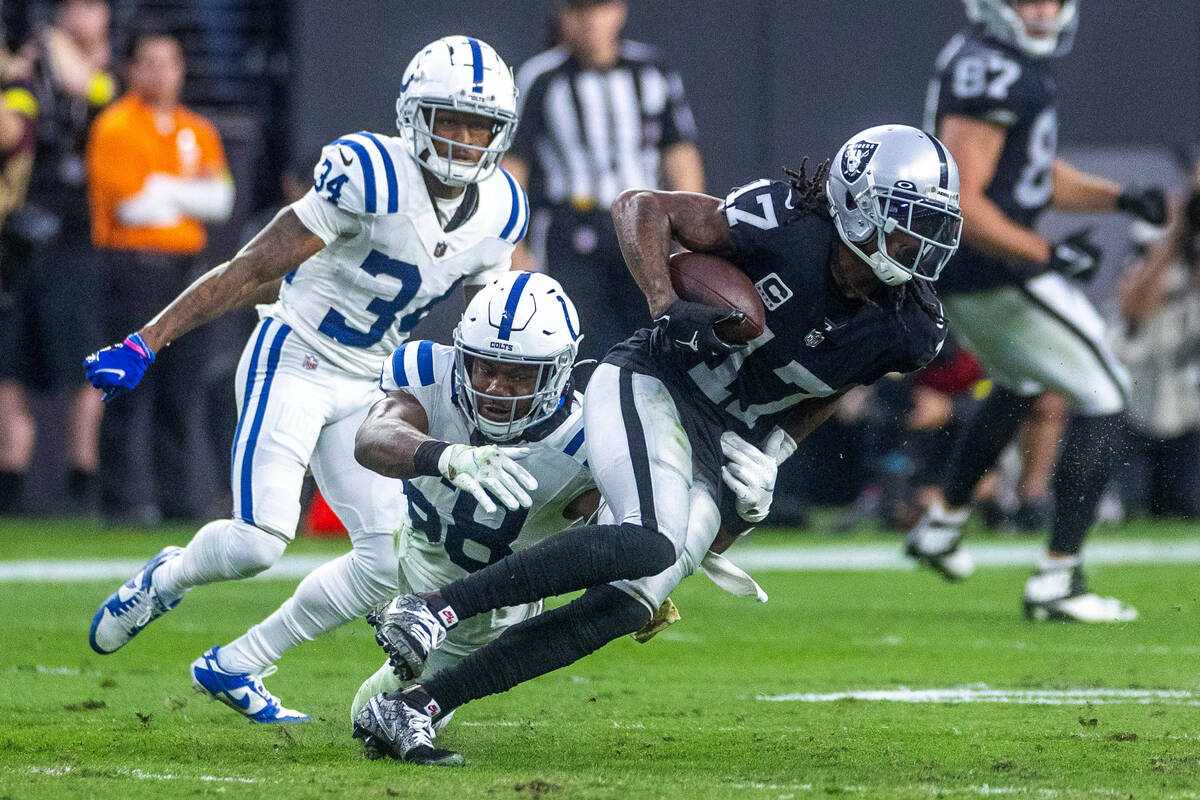 Raiders wide receiver Davante Adams (17) looks for more yards after a catch as Indianapolis Colts linebacker Bobby Okereke (58) attempts a stop during the second half of their NFL game at Allegiant Stadium on Sunday, Nov. 13, 2022, in Las Vegas. (L.E. Baskow/Las Vegas Review-Journal) @Left_Eye_Images

Raiders wide receiver Davante Adams studied the game of an unlikely contemporary in his never-ending quest to improve his repertoire.

Adams spent part of the 2021 offseason watching film of Ravens quarterback Lamar Jackson and started to focus on utilizing space on the field to generate more yards after the catch.

“It was kind of ridiculous to me some of the stuff he was doing,” Adams said. “I said I just have to be able to do half of that. I went into the (2021 season) with that as my main objective. I want to be aware of never letting the first guy get me.”

The focus has paid off. Adams is fifth in the NFL the past two seasons in yards after the catch and fifth in the AFC this season with 353 yards.

“I feel like part of it is innate,” Adams said. “Some of it is natural and just being aware of and knowing space, but another big part is working on it.

“I’ve kind of tapped into a new level. I think last year was really where I turned it up and started to be more aware of that, especially with the way I’m covered. It’s not easy to get into space. So making a couple people miss that are in my proximity has proven to be something that helps me out in my game.”

Adams and the rest of the offense also have shown a renewed focus on staying on schedule on the early downs to have more success on third down and sustain drives.

The Raiders (4-7) are 21st in the league with a 39.1 percent conversion rate but are coming off their best game of the season, as they went 8-for-14 in an overtime win over the Seahawks on Sunday.

Adams, who converted both of his third-down catches into first downs, believes the offense has shown a great deal of progress in that area.

“It’s just about situational awareness more than anything and not penalizing ourselves by putting ourselves in tougher down and distances,” he said. “This past game, that’s why we performed the way we did on third downs. You make it a lot easier when you have 2, 3, 4 or 5 yards to go rather than 20.”

Running back Josh Jacobs was a limited participant in the team’s first official practice of the week Thursday. He’s managing his workload as he deals with a calf injury.

Jacobs played despite the injury against the Seahawks and set franchise records for rushing yards and yards from scrimmage. He said he plans to play Sunday when the Raiders host the Chargers at Allegiant Stadium.

Linebacker Denzel Perryman has a wrist injury that limited his work Thursday, and defensive tackle Kendal Vickers was unable to practice after drawing a limited tag Wednesday.

Coach Josh McDaniels knows running back Ameer Abdullah wasn’t trying to make contact with a Seahawks player when he did his usual end zone celebration after scoring a touchdown Sunday.

But he also knows how costly the 15-yard penalty that Abdullah drew could have been for a team desperate for victories.

“Ameer is an unselfish guy, he would never do that intentionally, but we’ve addressed those kinds of things, because whether it’s on the extra-point team after you score a touchdown, celebration penalty, whatever it is, it hurts somebody else,” McDaniels said.

Abdullah said he would prefer to move forward instead of reflecting on the penalty.