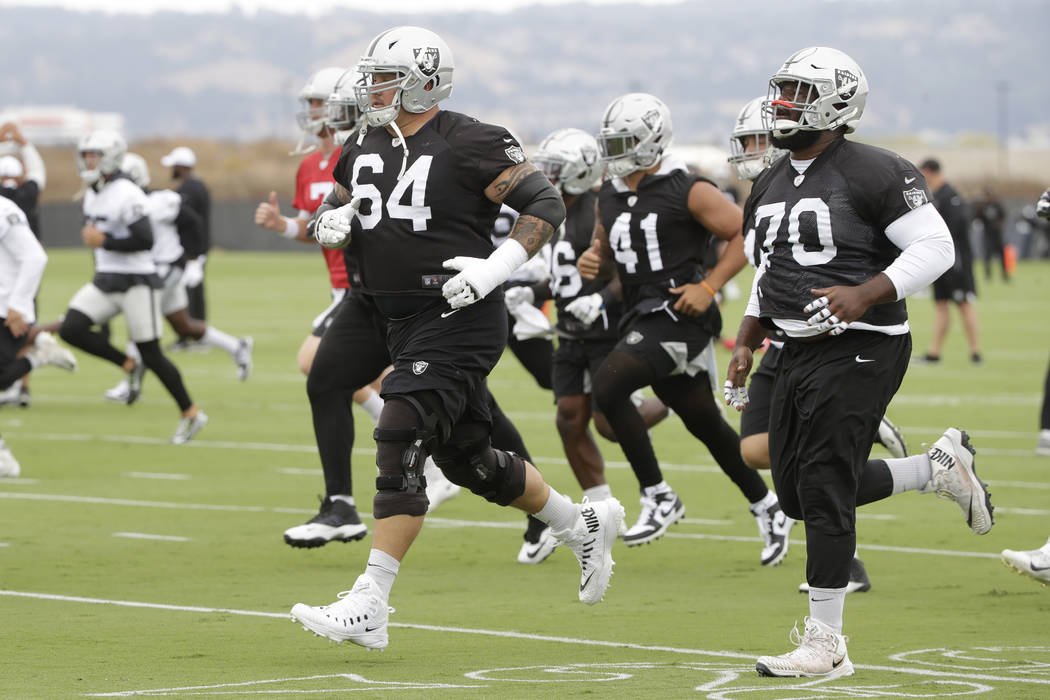 ALAMEDA, Calif. — When left guard Richie Incognito watched the Raiders play while serving his two-game suspension which ended this week, he said he liked to be alone.

He said he studied the games like a coach. “I’m watching the guys play on the offensive line and rewinding it, seeing if the backs made the right cut or the right read, and stuff like that,” he said.

So what did he notice from the team’s 1-1 start?

“I think the first week, they looked crisp,” Incognito said of the Raiders, who defeated the Broncos 24-16. As for the 28-10 loss to the Chiefs in Week Two, he said the Raiders “looked crisp as well. They came out on fire. … And then the game took shape, a couple big plays and not much offense after that.”

So there’s clear room for improvement as Incognito makes his return to NFL Sunday against the Vikings in Minneapolis. His comeback comes after his retirement in April of 2018, which was followed by a tumultuous summer . In June of last year, Incognito was held by police for a mandatory psychiatric evaluationafter reportedly throwing a dumbbell at a gym patron in South Florida. Then in August, he was arrested and charged with disorderly conduct and making threats at an Arizona funeral home where his father was being held.

The NFL gave Incognito a two-game suspension stemming from the incidents in July, well after Incognito had signed with the Raiders.

Now that it’s all over, Incognito says it’s a “big relief.”

“I just attack — attack going forward,” Incognito said. “The suspension is behind me. All the negative stuff is behind me.”

To re-integrate him into the offense, Raiders coach Jon Gruden said the team had less full-speed work in Wednesday’s practice but increased the number of plays.

“We increased the communication opportunities for Richie to get wired back in,” Gruden said. “All indications are good. He looked good today.”

The communication will be particularly important in a loud environment like U.S. Bank Stadium, as the Vikings are known to draw raucous crowds.

“It’s a really good thing for us to kind of come together, learn Rodney [Hudson’s] silent snap count — something that I haven’t had to experience before,” Incognito said.

Quarterback Derek Carr said he was glad to have his starting left guard back at practice, as the Raiders’ offensive line gets closer to full strength.

“He’s a Pro Bowl offensive lineman. Any quarterback’s excited about that,” Carr said. “And then Gabe [Jackson] will come back after him, which is crazy, right? So we’ve just got a lot of depth and that’s a good thing — especially when you play quarterback.”

Incognito is a four-time Pro Bowler — including the last three seasons he played with the Buffalo Bills from 2015-2017. But even though he hasn’t appeared in a game since the Bills’ playoff loss on wild card weekend in that 2017 season, Incognito doesn’t anticipate the long break being an issue.

“I’ve made a lot of starts,” Incognito said. “Probably will be tired, probably will be a little out of shape, but working back into shape and playing with these guys will give me enough energy to get through.”

As a 36-year-old lineman with a checkered past, Incognito says he’s relishing the opportunity to play again. He doesn’t want to let a moment slip by without appreciating it. He also wants to reward the Raiders for their commitment to him.

“What I think is big is really enjoying every day in here because you don’t know how many more you’re going to have,” Incognito said. “And wanting to play well, wanting to play well for coach Gruden, for Mike Mayock, for coach [Tom] Cable, for the rest of the offensive line for all the hard work we’ve put in. Really, just want to charge forward and make it right.”