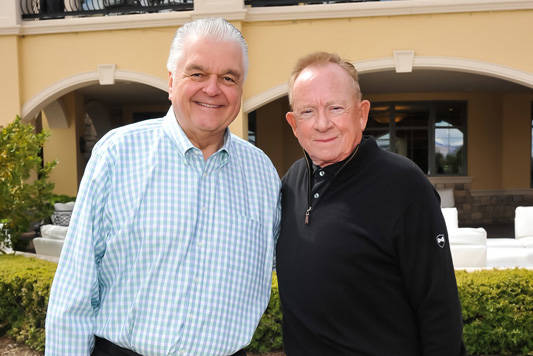 Once again, the Las Vegas Golf Hall of Fame Night of Induction is the Shriners Hospitals for Children Open kickoff event.

The Night of Induction is Saturday, Sept. 28 at The Hill at TPC Summerlin, preceded by a golf tournament Sept. 27 at Spanish Trail. Tickets for both are available at LasVegasGolfHOF.com. All proceeds benefit the Las Vegas Golf Hall of Fame and Southern Nevada junior golf.

Welch turned professional in 1961 and became the Desert Inn head pro in 1964. From 1976-1990, he served as Dunes Country Club director of golf. Over the years, Welch coordinated the PGA Tour’s Tournament of Champions, was on the planning committee for the first Las Vegas PGA Chapter and later served as the chapter’s secretary, vice president and president.

Goett is the founder of Olympia Companies and opened Southern Highlands in 1999, which is the home of the UNLV men’s golf team. The course was the final project by hall of fame architect Robert Trent Jones and one of four courses created by he and his son, Robert Trent Jones, Jr.

May is the preeminent rules official in Southern Nevada and has officiated hundreds of local, regional and national tournaments including both the men and women’s U.S. Open tournaments. She is currently the vice president of the SNGA and a previous president of the Nevada State Women’s Golf Association and Women’s Southern Nevada Golf Association. She also educated thousands on the new rules of golf that launched in January.

Hixson is the sole Lied Foundation trustee and known as the “pioneer” of UNLV men’s golf. She was the first to substantially donate upon head coach Dwaine Knight’s arrival in 1987, which set the foundation for 1998 NCAA title.

Kim Dongkyu and Lucas Kristo of Desert Mountain Golf Club in Scottsdale won the Dave Goff Angel Park Pro-Scratch with a two-day total of 13 under. Michael Block and Jacob Wilner, Kenny Park and Andrew Von Lossow, and Aaron Slonim and Jack Trent tied for second at 11 under.

Through July, play Mountain Falls and receive a sleeve of Callaway Super Soft golf balls with paid round.