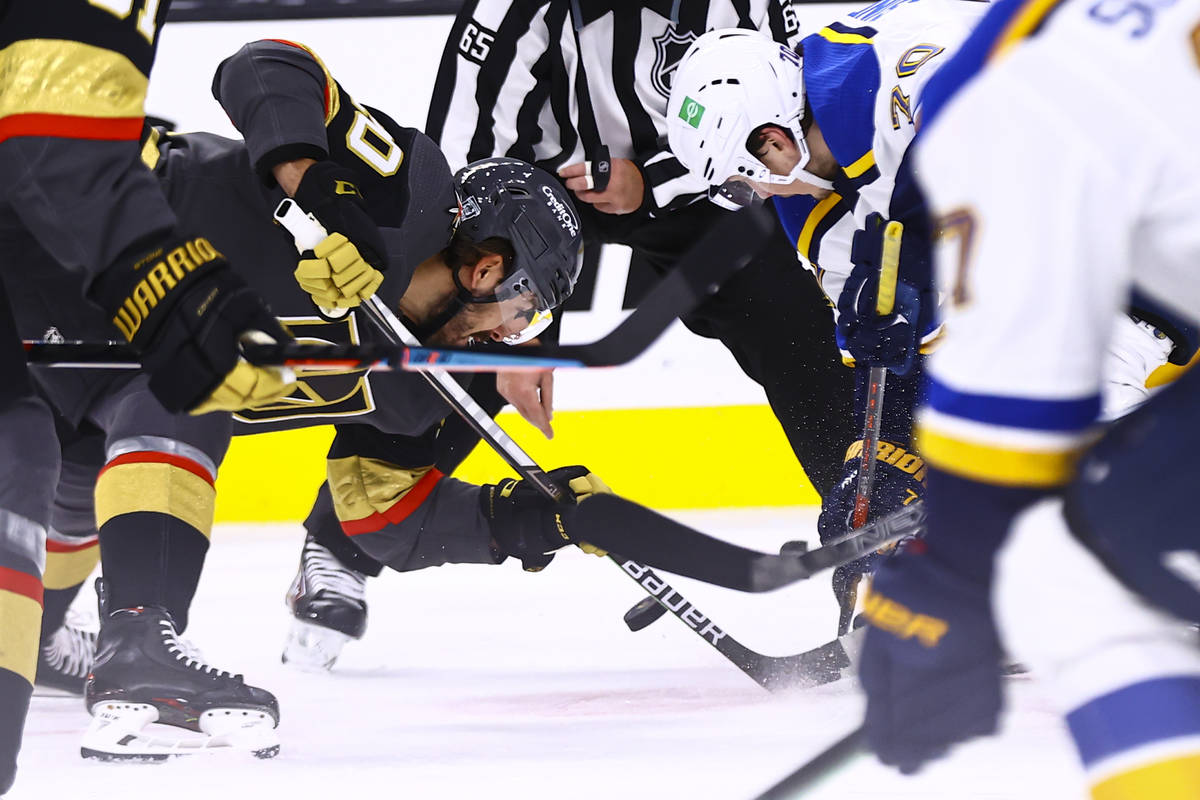 That dang part about hindsight gets you every time.

It has reared its frustrating head yet again, the Golden Knights having had their game against St. Louis postponed Thursday night at T-Mobile Arena after Knights defenseman Alex Pietrangelo and another member of the coaching staff entered the NHL’s COVID-19 protocols.

The news came two days after the Blues defeated the Knights 5-4 in a shootout, a game in which Knights general manager Kelly McCrimmon served as head coach.

He was behind the bench — with an assist from coaches of the American Hockey League’s Silver Knights — because a member of the NHL staff tested positive, meaning coach Pete DeBoer and his assistants were kept away.

Which, given Thursday’s postponement, begs the question: Should they have played Tuesday?

Was it an irresponsible or acceptable decision based on testing and tracing data?

Did the league put the Blues at risk by playing a team whose staff registered a positive test? How upset should St. Louis be right now?

And there’s the rub. As with most things NHL, far more information is needed to assume an immovable stance.

Now, if there was even a chance of less than 1 percent that officials believed others could be infected based on the coaching exposure, neither team had any business near the ice.

But who was the first staff member to test positive and how much was he around players such as Pietrangelo? Did the results of any contact tracing make it intelligent or shortsighted to move forward, even when it was announced after Tuesday’s game that no players had tested positive?

Lots of stuff that hasn’t been made public.

Remember. This is the weird noncommunicative world of upper and lower body injuries.

“At this point, I would sure think not that (Thursday’s) game would be postponed, depending on what might change between now and then,” McCrimmon said after Tuesday’s loss. “It was never a consideration not (to play Tuesday), once we were able to assemble a coaching staff for the game. Unless there is more information, unless there is more bad news in terms of positive tests, I don’t think (Thursday would be postponed). But, again, it’s hard to speculate.”

Not 48 hours later, the bad news arrived. You can speculate now.

Result of no bubble

It was never going to be a perfect season regarding protocols. The Knights aren’t the first team to have a game postponed — Dallas and Carolina know the feeling all too well — and in all likelihood won’t be the last. Washington was recently fined $100,000 for players violating NHL protocols. Other teams have had players assigned to the league’s COVID list.

Like other major professional sports leagues, the NHL seems intent on pushing forward to finish a condensed regular season and commence its playoffs. It’s a gamble the league took playing outside a bubble. Guys pop positive. Teams are affected. Games are postponed.

You just hope all the talk about health and safety is genuine, that had there been an inkling of doubt about playing Tuesday, the game would have been called off.

It was Monday when Knights forward Alex Tuch was asked about how the team has handled COVID-19 realities.

“We’re pretty locked down,” he said. “We follow all of the NHL protocols to a T … We’ve stayed pretty diligent with what we have seen with teams that don’t. You know what — I’ve said it before — it’s a sacrifice that’s much needed.”

A few days later, that gold shield was penetrated. We should know how deeply over the next 48 hours.