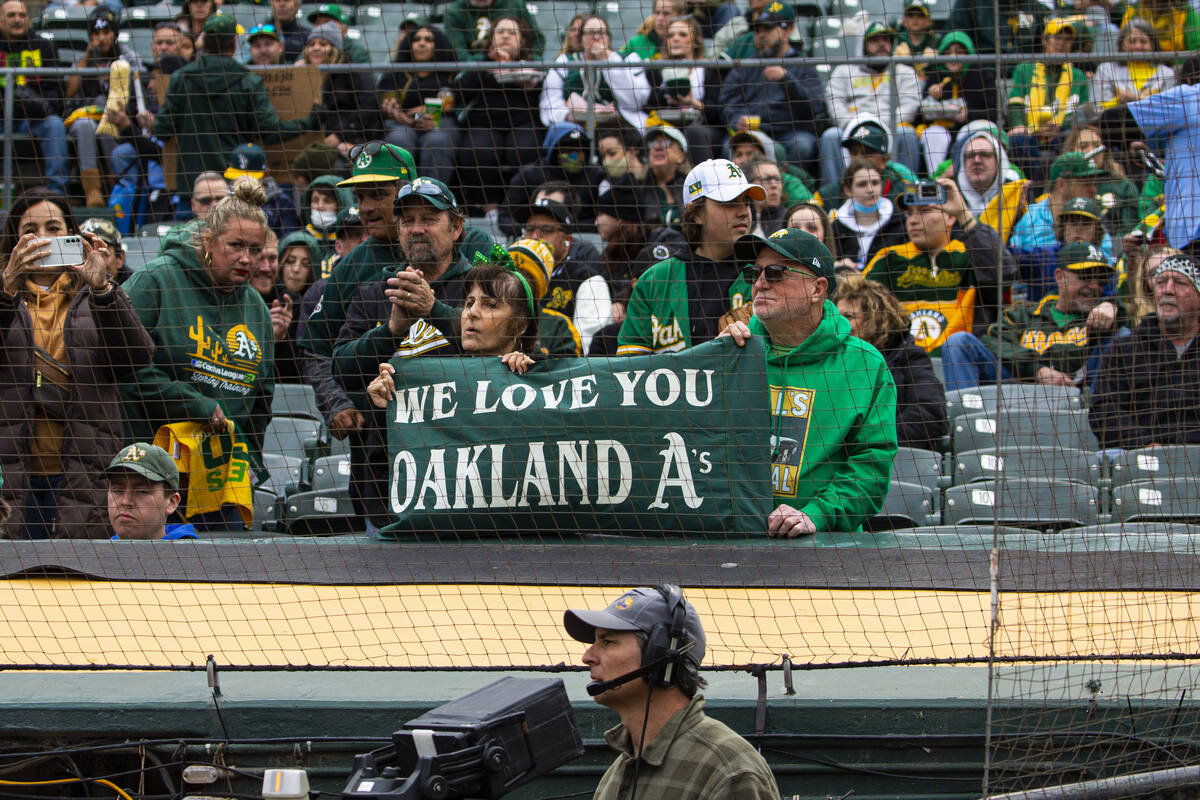 There’s an expression about being born on third base, which is where the Oakland A’s long and drawn-out plan to relocate to Las Vegas might be standing.

Should the A’s move to the valley, MLB would not charge the struggling franchise a costly relocation fee, a person with knowledge of the situation told the Review-Journal on Monday.

The news broke three days before the San Francisco Bay Conservation & Development Commission will vote on removing the designation of Howard Terminal on the Oakland waterfront for port activities — considered a crucial step toward the A’s building a new ballpark in the city they have called home since 1968.

I’ll trade 10 Rickey Hendersons and throw in a Reggie Jackson rookie card for one James Kaprielian to anybody who thinks the timing of this latest news leak is merely coincidence.

Not having to pay the moving fee is a little more fortuitous than finding a $20 bill in the laundry when it comes to the possibility of the A’s moving to Las Vegas.

It has opened what once appeared to be a crack in the door to an opening so wide that even a lumbering catcher could run through it.

A report published by newballpark.org in March 2021 — two months before the A’s began seeking a deal in Las Vegas — speculated MLB’s moving surcharge could run as high as $1 billion to ensure the value of its other franchises.

It just so happens that $1 billion is the projected cost of building a new domed ballpark in Las Vegas.

It bears repeating that the A’s chances of receiving the kind of sweetheart deal the Raiders got ($750 million in public funding) when they left moribund Oakland Coliseum in the rearview mirror is much less than that of them rallying to make the playoffs.

But John Fisher, the A’s frugal owner, could use the $1 billion (or somewhere in that neighborhood) relocation fee savings to build a ballpark himself, or at least offset a big chunk of what one will cost.

And then Fisher might think he is getting the kind of deal in Las Vegas that he has been instructing A’s president Dave Kaval to pursue for more than a year.

With Las Vegas Ballpark only 3 years old and not anywhere close to smelling of hot dog mustard and spilled beer, the city wasn’t exactly looking for a MLB team when the A’s starting coming to the valley on fact-finding missions.

But would Las Vegas send the Aviators and Finn the Bat Dog packing if it made sense for Las Vegas? You could set your pitch clock on it. Especially considering that same report about relocation fees said it probably would cost about $2 billion to land an expansion team down the road so commissioner Rob Manfred can reach his goal of a balanced 32-team setup.

If MLB waives the A’s relocation fee, the only ones striking out would be the other owners who would have pocketed a nice chunk of change from the transaction.

But should the A’s make significant progress on a new ballpark, regardless of location, they no longer would be eligible for handouts they are receiving under baseball’s new collective bargaining agreement.

Depending on how many spectators the Yankees and Red Sox cram into the bleachers — and how much they are charged for a jumbo beer — having the A’s off the books could still be worth something to the other owners under a setup that paid out more than $110 million to teams less fortunate.

How it all plays out is anybody’s guess. But with the key vote in Oakland on Thursday, the A’s might be dancing off third base with the knowledge they’re closer to home than they’ve been in a while.