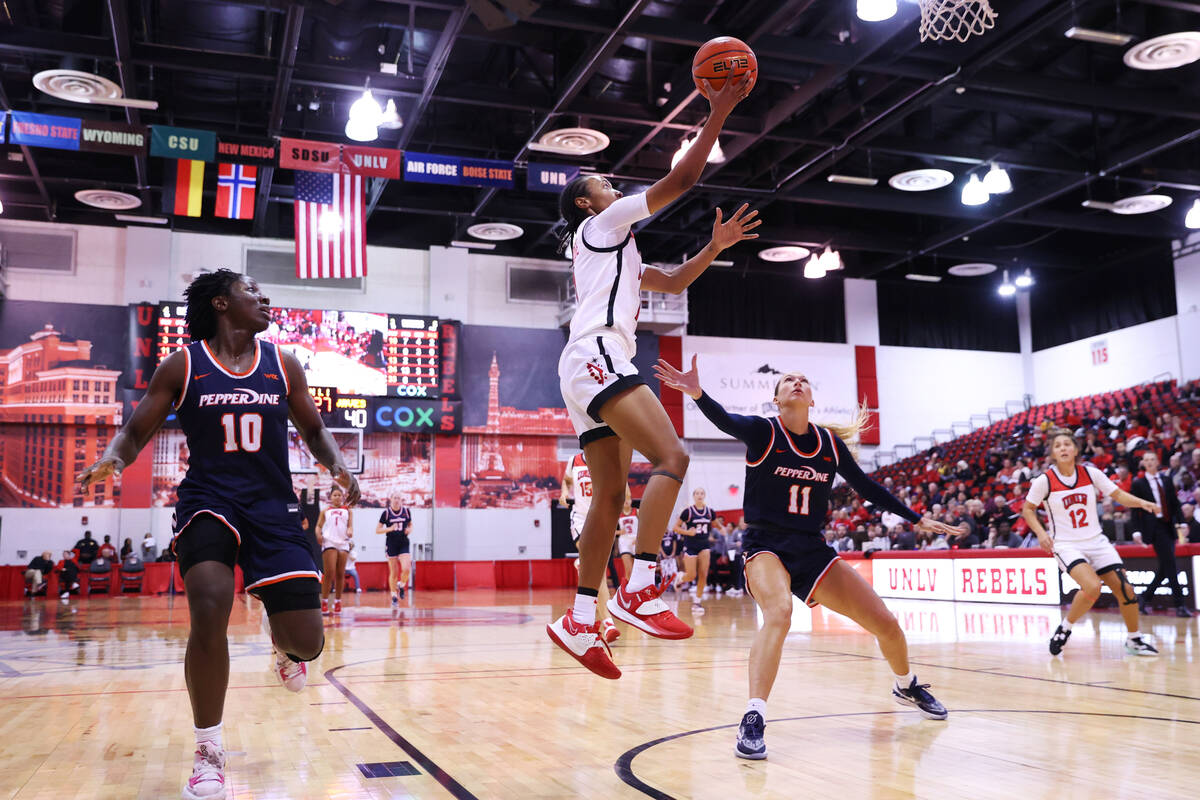 Pepperdine's Jane Nwaba (10) and Helena Friend (11) look on as UNLV's Justice Ethridge (11) takes a shot for a score during the second half of a women's basketball game at the Cox Pavilion in Las Vegas, Monday, Nov. 7, 2022. (Erik Verduzco / Las Vegas Review-Journal)

UNLV women’s basketball coach Lindy La Rocque didn’t necessarily expect to be off to the program’s best start in 32 years.

The Lady Rebels haven’t played a particularly difficult schedule to start the season, but the roller coaster of college athletics — coupled with La Rocque’s brief absence after giving birth to her first child — meant a loss here or there was certainly imaginable.

“Obviously we have really high expectations of ourselves, and we never go into a game thinking we’re not going to win it,” she said. “But you never know. At the beginning of the year so many things can happen like injuries or sickness.

“But I’m not surprised that we’ve won all our games.”

The Lady Rebels are 7-0 after a successfully hosted Thanksgiving tournament and are hitting the road for the first time this season. UNLV takes on Pacific (4-3) at 2 p.m. Saturday in Stockton, California, the first of four straight games away from Cox Pavilion. The Lady Rebels face Hawaii Hilo on Wednesday, Hawaii on Dec. 11 and Oklahoma State on Dec. 18.

On Sunday, UNLV beat Illinois State, an NCAA Tournament team last year, 73-66 in the final of the Thanksgiving tournament. However, for a veteran Lady Rebels squad that only cares about conference titles and NCAA Tournaments, these early wins haven’t particularly fazed them.

“Thinking about the record isn’t really something we think about,” senior wing Justice Ethridge said. “We try to take it one game at a time, one day at a time, so we’re not really looking that far ahead or that far behind us either.”

So far, the Lady Rebels have looked like the dominant team that swept through the Mountain West last season to win the conference’s regular-season and tournament crowns. UNLV lost only one senior from last year’s team, and La Rocque and her players said the chemistry the team entered the season with has already been apparent.

“I think it’s something that’s really special we’ve got going on for us,” sophomore Alyssa Durazo-Frescas said. “We’re a young team. We’ve got a lot of young talent.”

The off-court chemistry shows up most in the way the team’s offense has run through the first seven games. In the past, UNLV needed Desi-Rae Young, senior guard Essence Booker and 2021-22 Mountain West Sixth Player of the Year Nneka Obiazor to carry most of the load in scoring.

The trio still leads the team in scoring this season, but La Rocque said this iteration of the Lady Rebels is more balanced. Ethridge is shooting 42.9 percent from 3, sophomore Alyssa Brown has emerged as an important reserve, and Young has evolved as a passer, ranking second on the team in assists.

La Rocque admitted the most challenging part of UNLV’s schedule is still in front of it, but she’s excited to see how her team handles the pressure going forward.

“December’s going to be a real tough challenge,” La Rocque said. “Looking back, if we’re undefeated in December as well, then I’ll be like, ‘(Expletive), that’s pretty good.’”