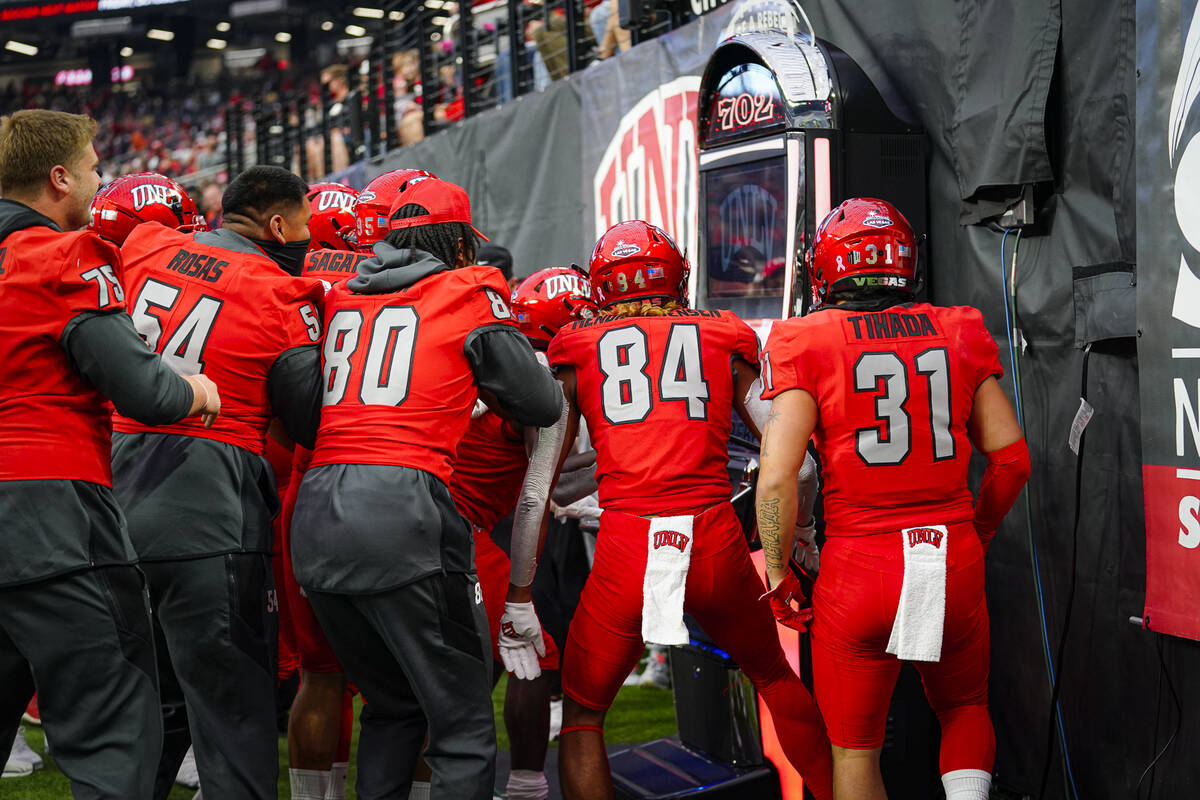 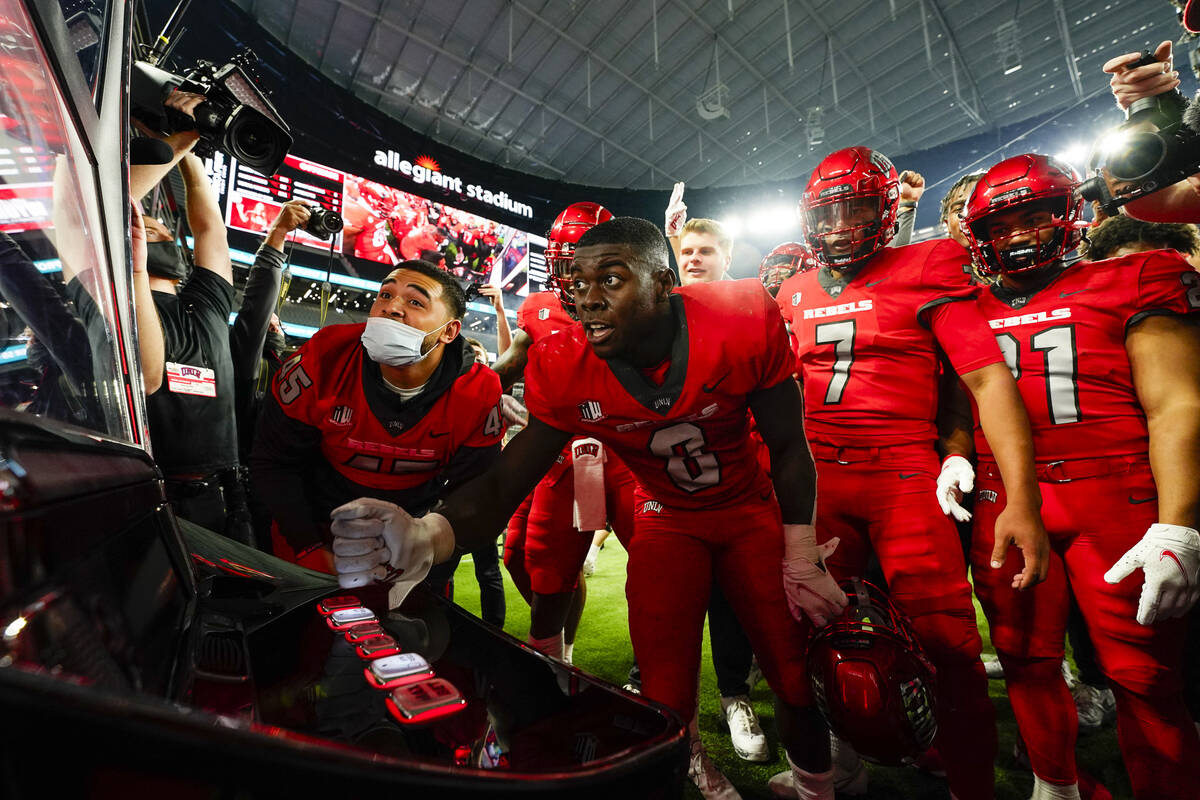 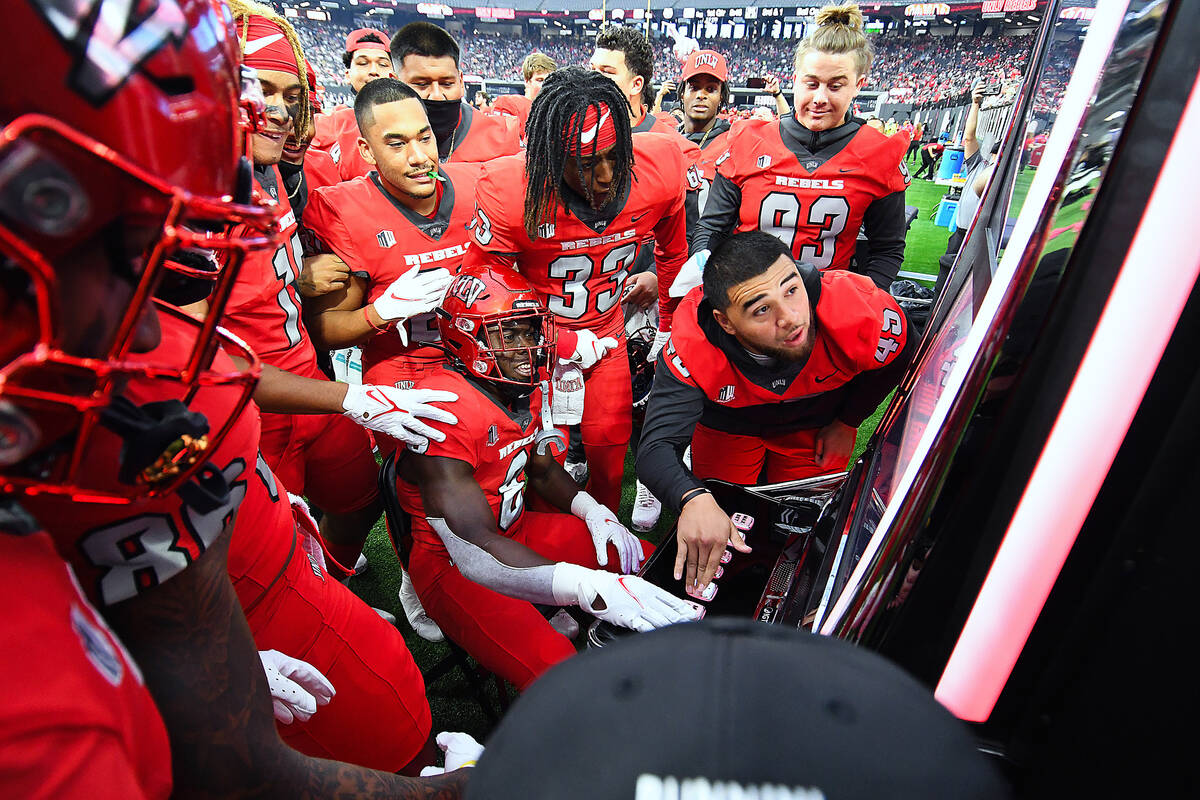 The banter began toward the end of the spring football season. What, Rebels coach Marcus Arroyo pondered, could help ignite the team after a long touchdown or takeaway? What kind of prop could spark the players and the crowd?

So he talked to Shelby McIntyre, the program’s chief strategy officer and director of recruiting, about options.

“I really wanted to somehow implement a slot machine,” McIntyre said. “I wanted the slot machine to win every spin, because it’s kind of a letdown if you go and spin and you don’t win.”

The Rebels unveiled their shiny new toy last Saturday during a 28-24 home loss to Utah State, drawing rave reviews from their players — and Arroyo. Senior running Charles Williams was the first to pull the handle after a 75-yard scoring scamper.

But the Rebels congregated to the sideline and used it again at various junctures throughout the game. It’ll likely remain on the sideline for the foreseeable future during home games at Allegiant Stadium, Arroyo indicated.

“What can we do to get some excitement around the guys? … Turnover belts and chains and all those things that are now culturally part of the game are all used up,” Arroyo said. “I’m sure many people think it’s stupid … but the guys liked it and I wanted something that (represented us).”

The conversations in the spring between Arroyo and McIntyre quickly morphed into tangible action, and McIntyre reached out to former Rebel running back Joe Haro, who serves as a director for the UNLV Football Foundation. Haro connected McIntyre with representatives from IGT, a company based in Reno that produces slot machines.

McIntyre pitched the idea, believing that a celebratory slot machine could go viral on the internet.

IGT was receptive, McIntyre said, and began constructing the machine in July after obtaining the necessary licenses. The company’s mathematicians developed an algorithm that would guarantee a victory with every spin.

The machine cost $60,000 to produce, McIntyre said, and IGT donated it to the UNLV’s football program: “I hope they get good advertising out of it,” she said.

The Rebels hoped to unveil the slot machine last month during the home opener against Eastern Washington, but the production didn’t conclude until the beginning of last week. Arroyo told the players about it on Friday and gave direction about how and when to use it.

“The first game was an adjustment. It’s something new. The players had to figure out where it was and when to use it,” McIntyre said. “As we get into it more, it’ll just be kind of natural for home games.”

McIntyre had hoped it would arrive earlier so the program could inform the fans about it before the game last Saturday, but they’ll see it on their sidelines moving forward.

“It was fun. It was a fun little way to just keep the sideline entertained,” Rebels senior linebacker Austin Ajiake said. “Keep guys excited. Keep the crowd involved. It was a nice little way to get our signature in Vegas on the field.”