Casinos hiring to keep up with growing demand 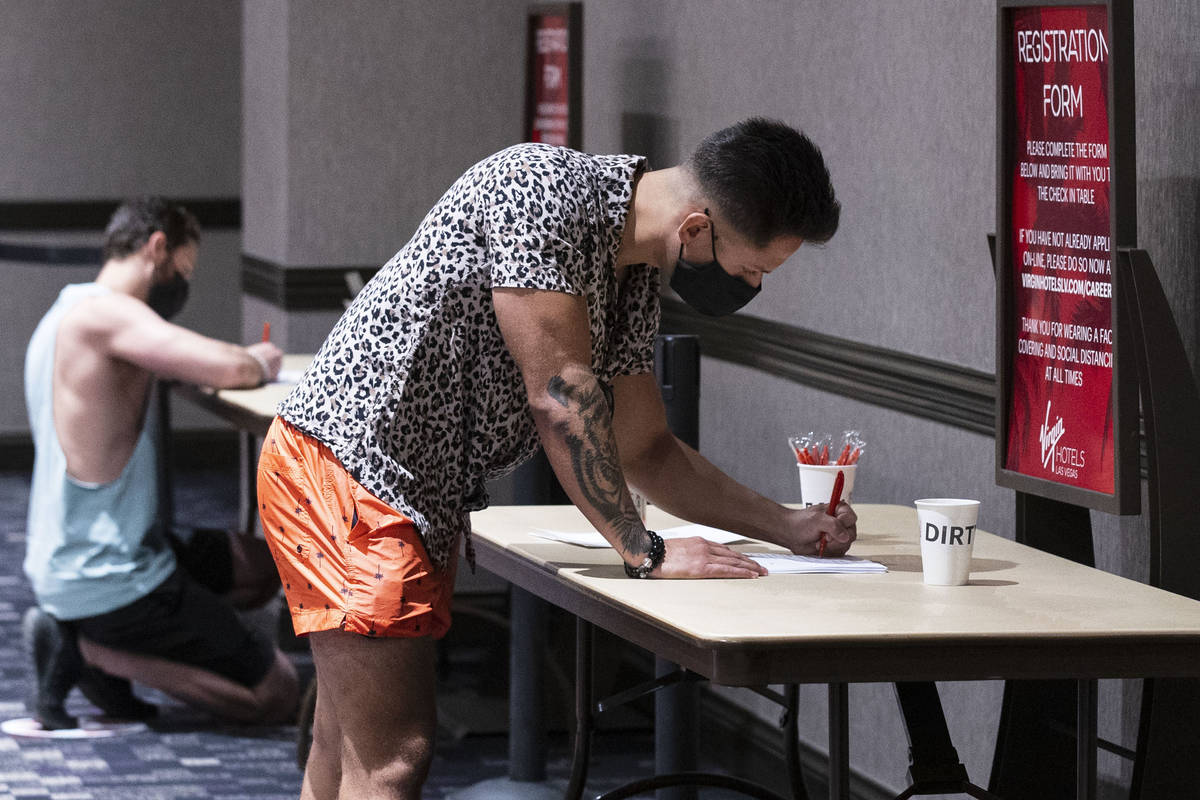 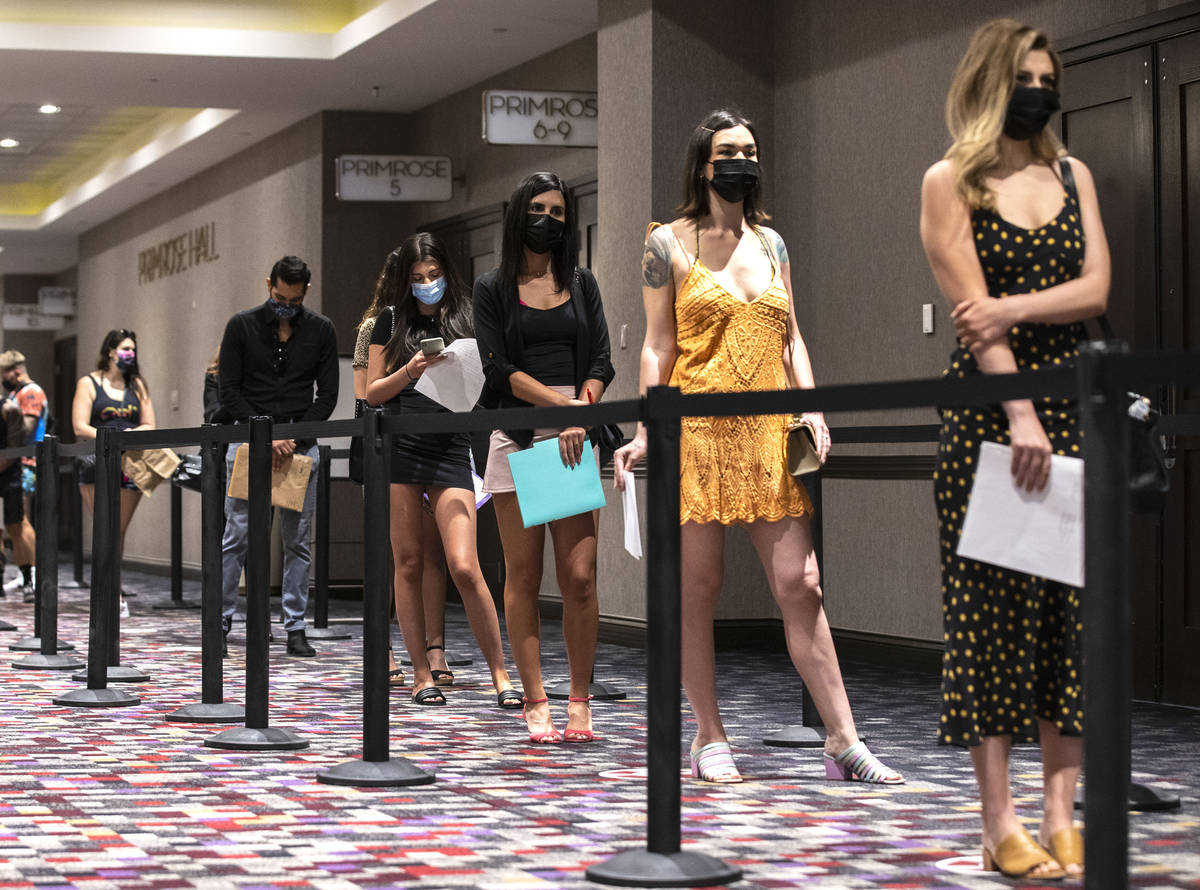 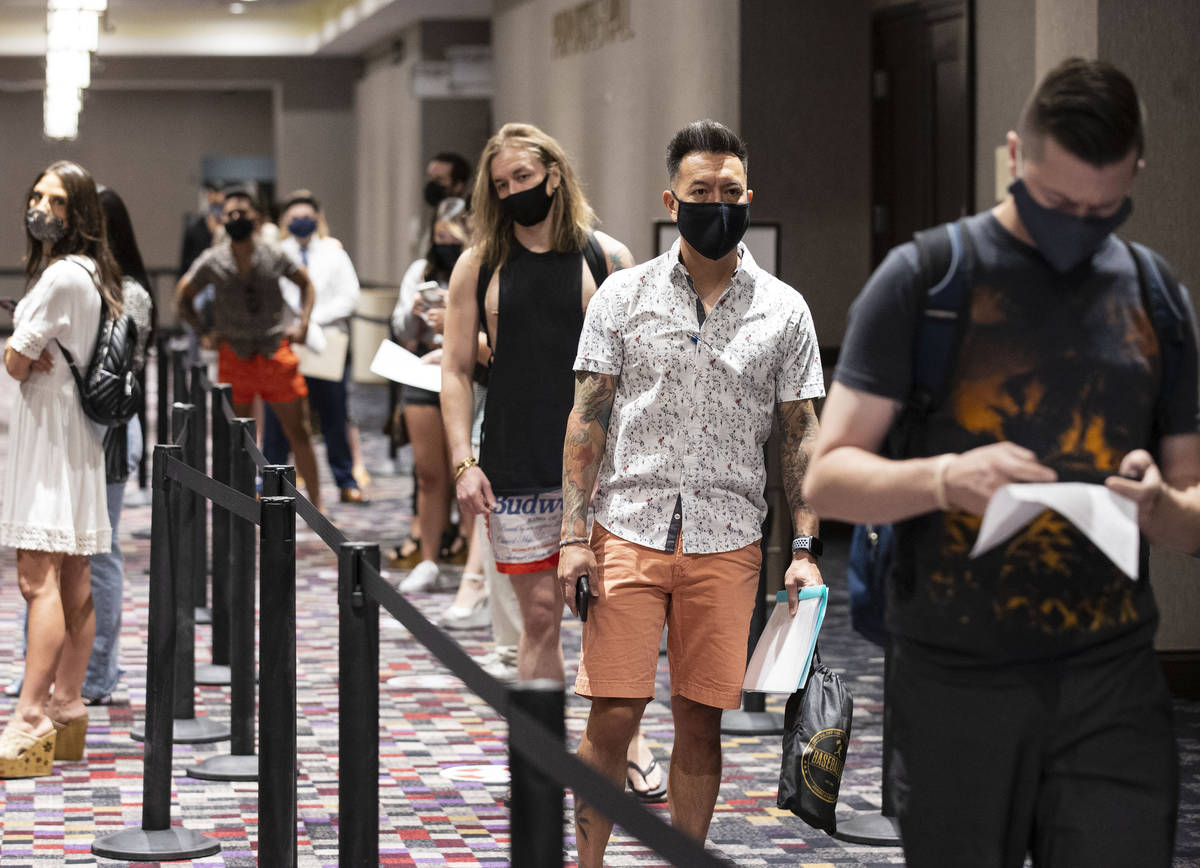 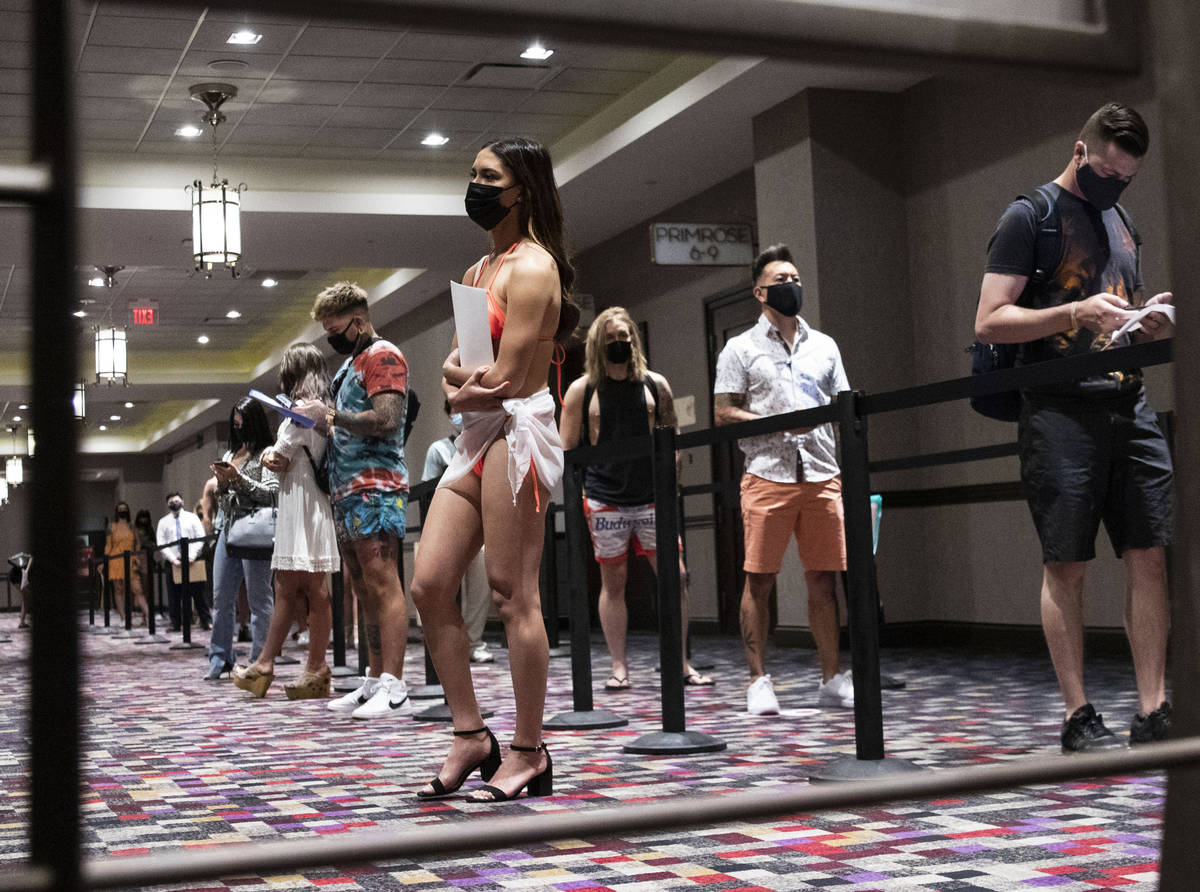 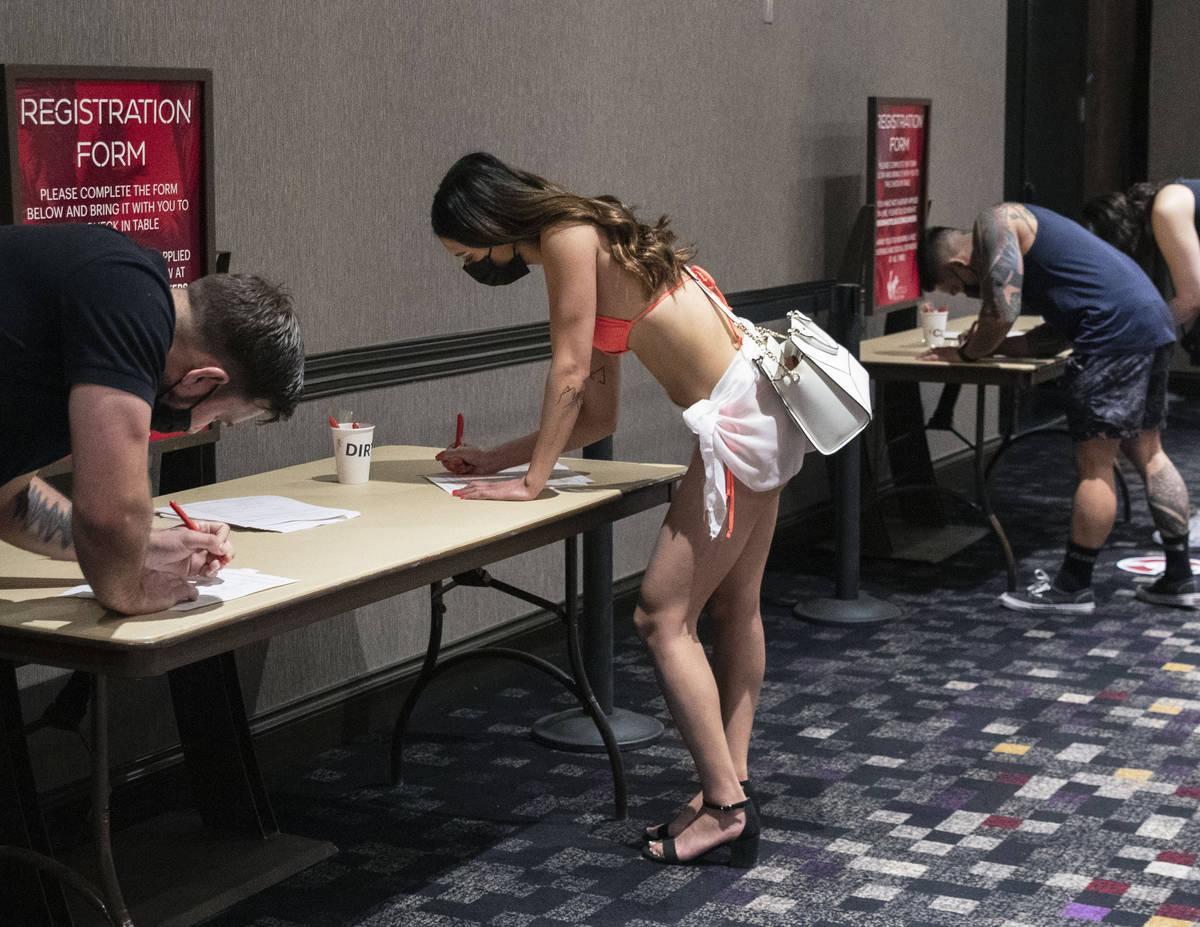 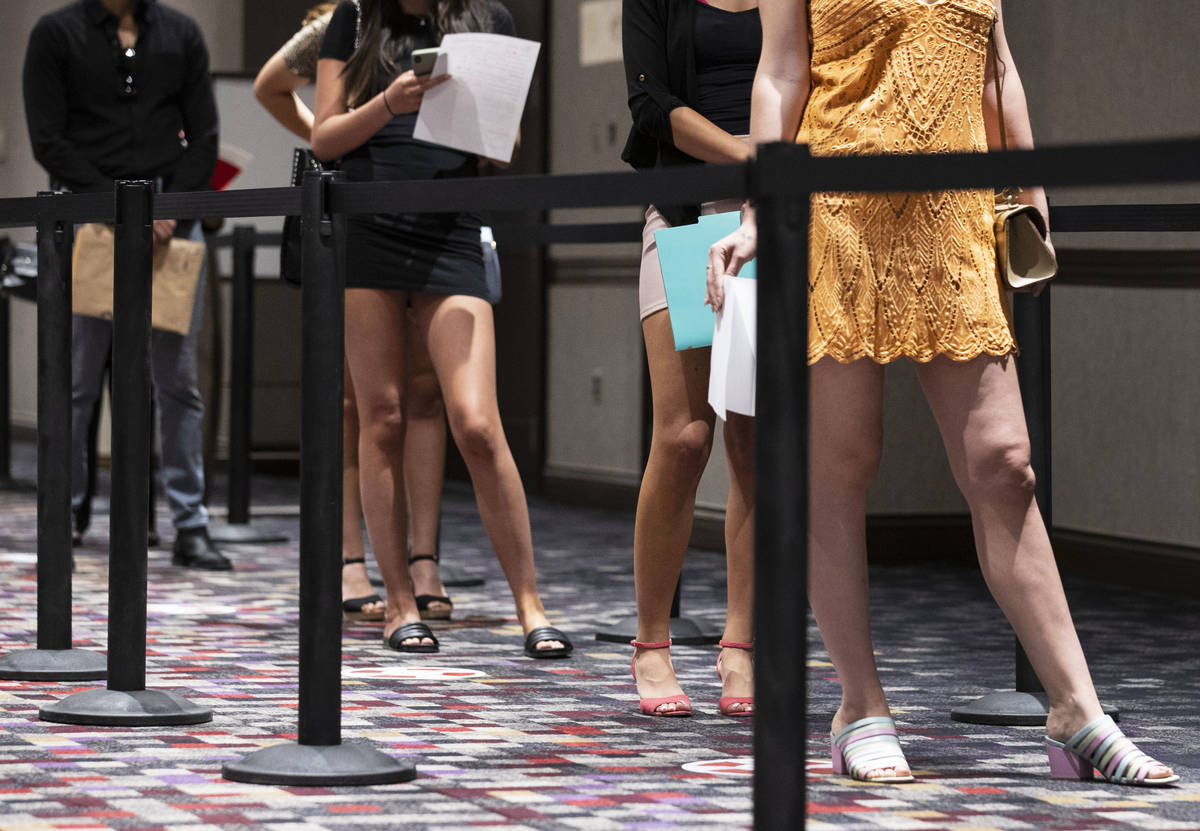 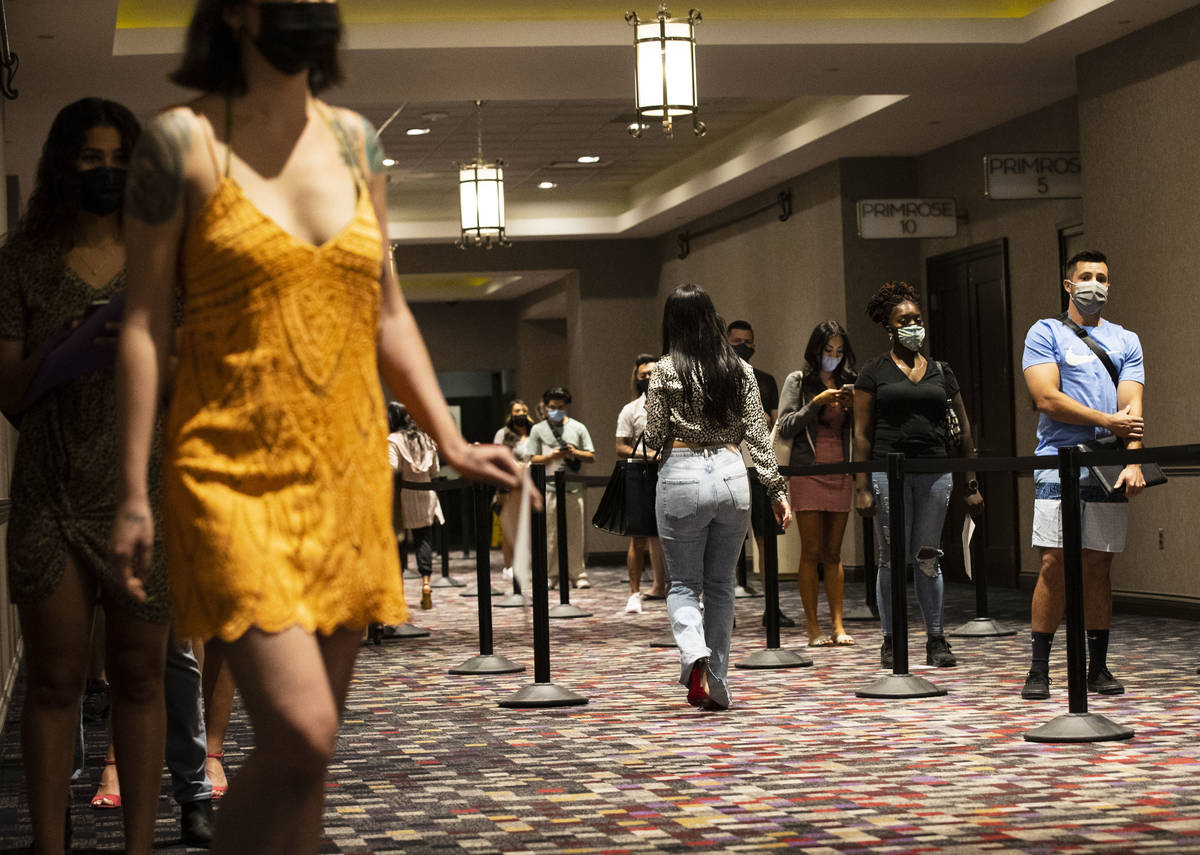 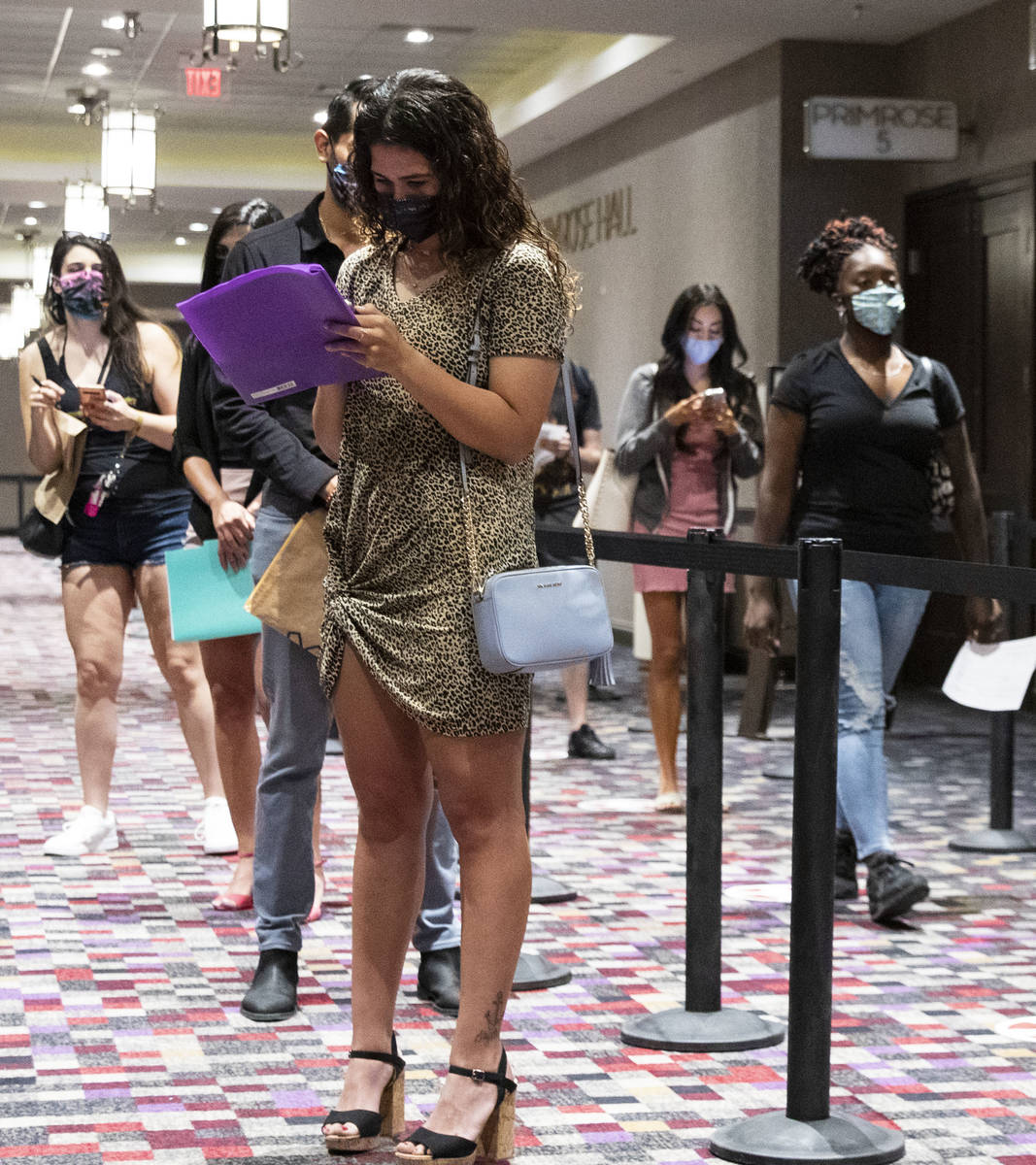 As tourism ramps up across the Las Vegas Valley, some casino companies are rushing to fill hundreds of jobs to keep up.

A handful of operators have launched hiring events in recent weeks: Circa resort-casino in downtown Las Vegas, for instance, is hosting drive-thru hiring events this month, while MGM Resorts International is holding job fairs every Wednesday until further notice. At a job fair last week, the company hired more than 100 people on the spot.

Local company leaders say these efforts should reduce staffing shortages and help prepare them for further business upticks that are expected to go hand-in-hand with the easing of COVID-19 restrictions in the coming months.

“We don’t want to be in a position where we can open all the restaurants and open at 100 percent of our occupancy but not have enough people to serve our guests the way we want to serve them,” said Randy Goldberg, MGM’s vice president of talent acquisition strategy. “We’re trying to get in front of that.”

Goldberg said MGM’s hiring efforts have been ongoing since the beginning of the year but started to really pick up steam about four weeks ago. The hires should help ease the staffing shortages the company has experienced in recent weeks, as travelers have started to return en masse.

“There’s no doubt that we’re probably a little bit stretched,” Goldberg said. “I don’t think anyone expected the ramp-up to happen this quickly.”

Hiring efforts have been escalating quickly: Goldberg said new hires can be on the job as soon as the week after the initial offer. The recent hiring surge will help fill positions for the upcoming pool season, but Goldberg said recruiting efforts should continue in the coming months.

“Moving forward, we know there’s going to be a need for other positions,” Goldberg said. “Things are ramping up so dang quickly.”

The property plans to hire 400-plus workers over the next four weeks as additional restaurant venues come online. Hiring efforts from the hotel-casino and third-party vendors probably will continue through June 1, the goal date Gov. Steve Sisolak set for reopening the entire state to 100 percent capacity.

“To bring on these team members and open up more of these restaurants, when the market still hasn’t fully opened up yet, probably would not have been a good thing for anyone,” Bosworth said. “But now we’re seeing the restrictions (ease). and we’re certainly seeing a lot more traffic to the property as well. … We expect that to significantly increase and continue over the next six weeks.”

He said the property should be fully activated by June.

Hiring efforts are ongoing at other casinos across the Las Vegas Valley.

Ellis Island and Circa both held hiring events this month.

Boyd Gaming Corp. spokesman David Strow said the company is “definitely hiring right now” and “actively looking to fill many positions” at properties across Southern Nevada. The company has two job fairs scheduled in the coming weeks and is looking to hire in housekeeping, food and beverage and security. Jobs are offered on the spot at hiring events.

A Red Rock Resorts spokesperson said the company has brought back “well over” 2,300 employees and will continue to reinstate and rehire staff.

Spokespeople from Las Vegas Sands Corp., Caesars Entertainment Inc. and Wynn Resorts Ltd. — three of the six largest public casino operators in the state — did not return a request for comment.

Employment rates on the rebound

Job gains in Nevada’s leisure and hospitality sector are outpacing that of other industries, according to the most recent employment data from the Department of Employment, Training and Rehabilitation.

Las Vegas’ nonfarm, non-seasonally adjusted employment rates were up 0.9 percent between February and March, while leisure and hospitality was up 2 percent in that same time frame.

Job growth between February and March is typical in leisure and hospitality as resort operators hire seasonal pool workers, but DETR Chief Economist David Schmidt said in a statement that March’s numbers are “encouraging,” especially given the increased activity in hospitality businesses as capacity restrictions relax.

Casino floors and various other venues in Nevada are operating at 50 percent capacity under state orders, but restrictions are expected to loosen further next month. Clark County officials have proposed increasing occupancy limits to 80 percent by May 1, and heads of the Nevada Gaming Control Board have said that casino floors could see their occupancy rates begin to inch up in May as well. Both authorities say their decisions will hinge on vaccination rates.

Las Vegas’ unemployment rates are improving but still sit far above pre-pandemic levels. The city’s unemployment rate was 9.3 percent in February, compared with 3.6 the year prior, according to data from the U.S. Bureau of Labor Statistics.

While a significant number of locals have yet to return to work, the head of downtown’s Fremont Street Experience said the entertainment district has been struggling to fill certain positions.

Fremont Street Experience is looking to hire between 50 and 60 people in areas such as social media, ride operations and security.

But there is competition in the labor market: Simon noted that downtown as a whole has hundreds of job openings across its properties. Hotel-casinos including Circa and Golden Nugget have recently hosted hiring events, and other properties such as Four Queens and Binion’s have long lists of job openings posted on their websites.

Fremont Street Experience has been looking to hire “for a while,” trying its luck through job fairs, referral programs and marketing efforts, Simon said. There are still spots left open.

“We’re trying to keep up with demand because people are coming back,” Simon said. “We want to be ready even more so come hopefully June 1.”

Economist Jeremy Aguero said it has been an issue seen in various industries over the months, from logistics to service industries and the hospitality industry. As business begin to recover and raise occupancy limits, the issue is gaining momentum.

“We’re seeing a number of workers that appear to be just staying on the sidelines, whether by choice or necessity,” said Aguero, principal analyst with Applied Analysis.

There are several factors that could play into this, Aguero said.

Some workers are still concerned that returning to work amid a pandemic could risk their health and safety. Some have opted to stay at home as their children learn remotely. Others might be less motivated to return because of unemployment insurance benefits; the Biden administration’s American Rescue Plan provides a weekly $300 boost to unemployment insurance benefits through Sept. 6.

Aguero added that he expects the issue will improve in the coming months, as more workers get vaccinated and unemployment benefits dip.

“I think there are going to be some who will sit on sidelines for quite some time because they have health concerns or something along those lines. Some of that workforce is just going to be diminished,” Aguero said. But “I don’t expect the issue to be in any way permanent.”

Bringing back furloughed or laid-off employees has been a priority for many businesses across the valley.

About half of the 60,000 workers in Nevada represented by Culinary Local 226 and Bartenders Local 165, affiliates of Unite Here, have yet to be called back to work, according to spokeswoman Bethany Khan.

“Unionized casinos should be recalling workers who were laid off due to COVID-19 as the tourism levels rise,” Khan said in an email, adding that workers should be brought back by seniority. “Staffing shortages aren’t good for customers, workers or the company. The Culinary union will keep advocating to bring more workers back to work.”

Goldberg said MGM has brought back a majority of employees who were furloughed or laid off after casinos shut down in March 2020 but has also needed to undergo a “significant amount” of hirings to keep up with the increased business levels, mainly filling new positions or those that previous employees declined to accept.

“Because of the length of time — almost a year — between closing doors and very slow operations to now, there were a lot of other (former employees) who found other jobs,” he said.

Furloughed or laid-off MGM Resorts employees will remain on a recall list through at least the end of the year.

The company had about 42,000 employees as of Dec. 31, compared with 70,000 before the pandemic. Goldberg said he was unable to share updated employment numbers from the company because the count is changing by the hundreds every week.

The company’s Stick Around and Come Back program was initiated in February 2020, when the Hard Rock officially closed it doors for good. Employees were promised they could return to their former jobs for a 10-weeks pay, lump-sum retention bonus.

About 83 percent of 1,600 employees in the program returned for the March 25 reopening, with 300 new hires, Bosworth said.