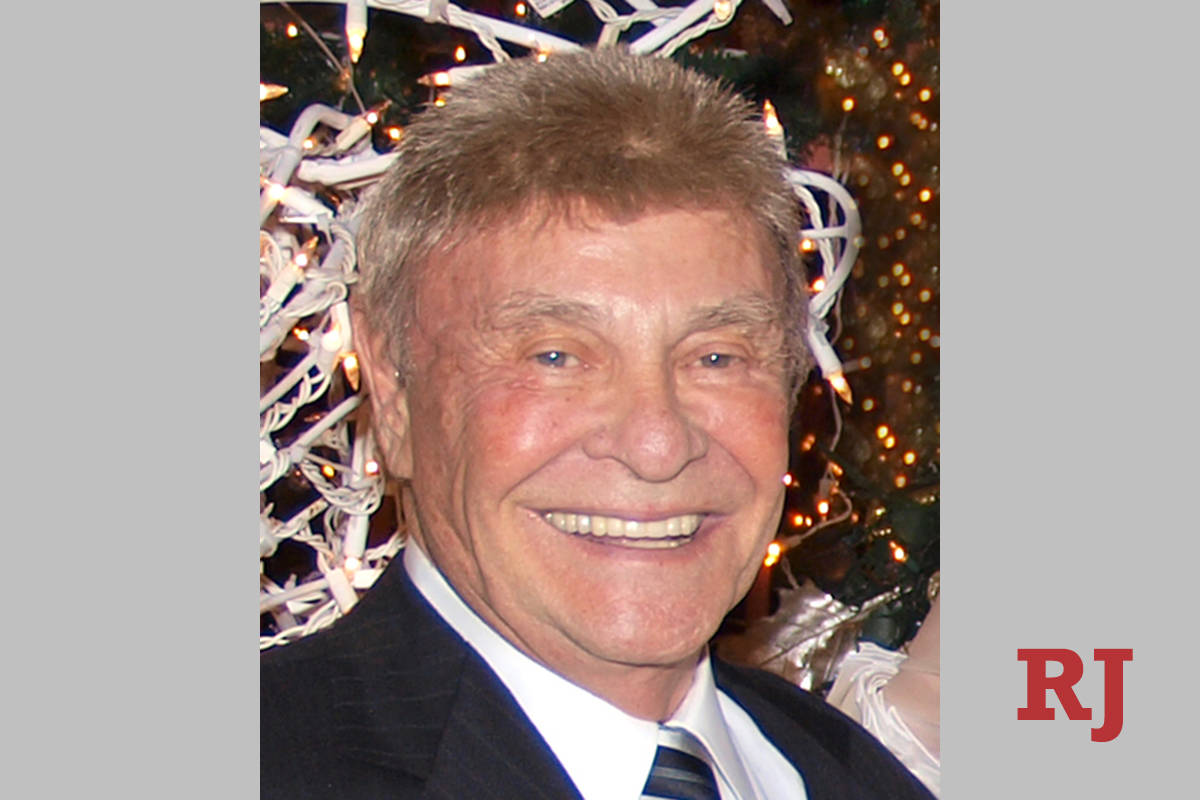 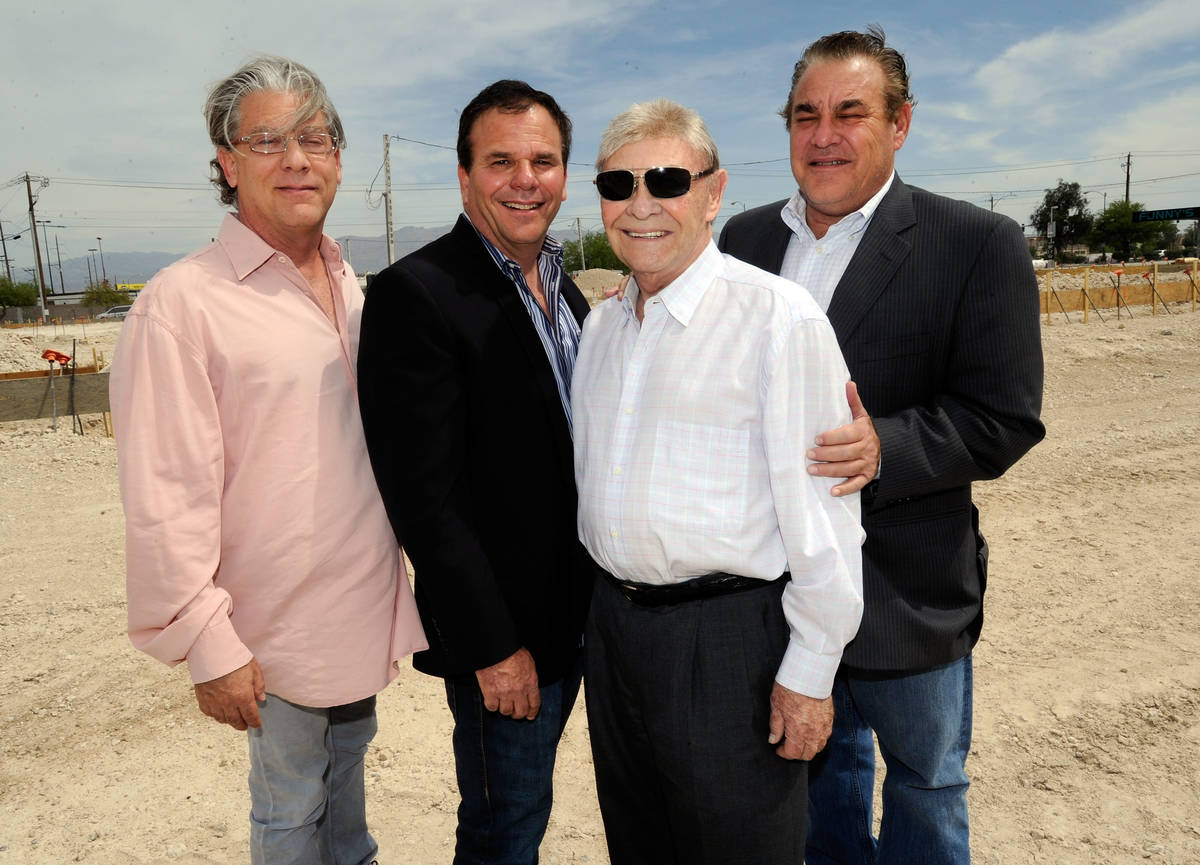 Developer Irwin Molasky, second from right, poses with his three sons, from left, Andrew Molasky, Alan Molasky and Steven Molasky as they take part in a groundbreaking ceremony for the Lone Mountain Senior Apartments complex at Lone Mountain Road and Rainbow Boulevard in Las Vegas on Thursday, May 3, 2012 (David Becker/Las Vegas Review-Journal) 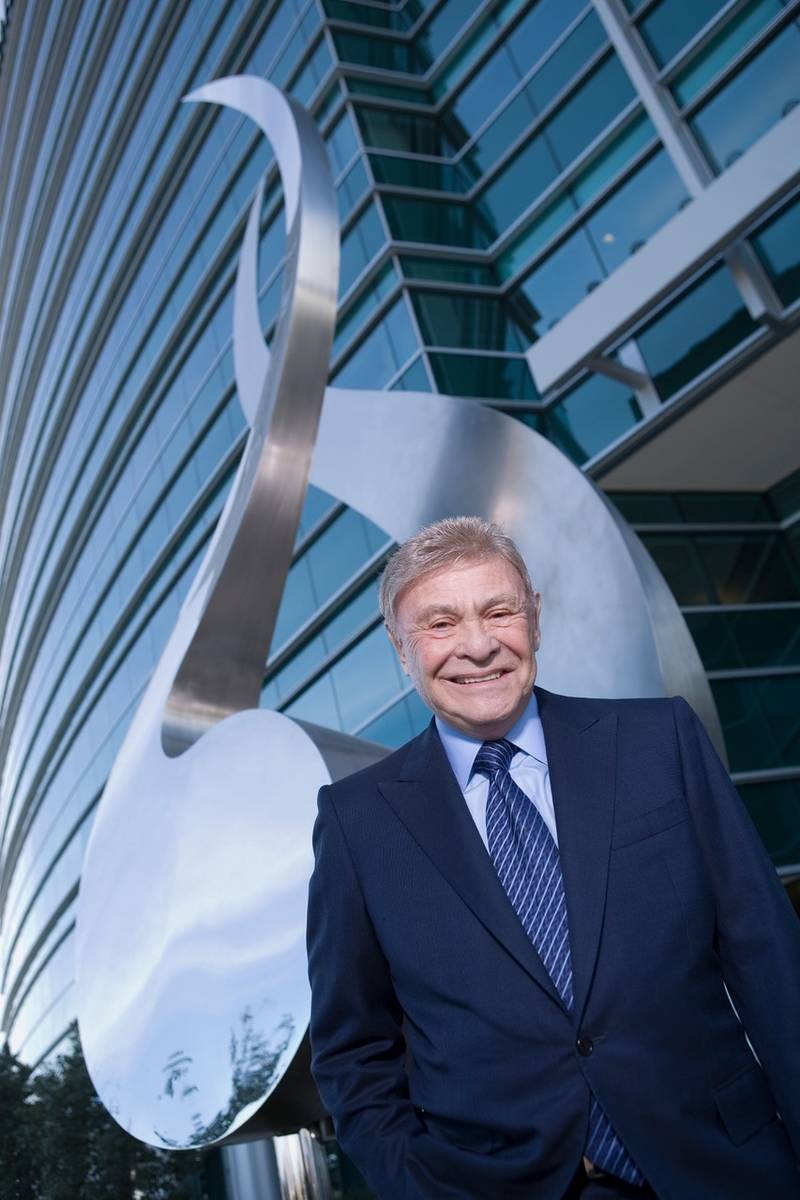 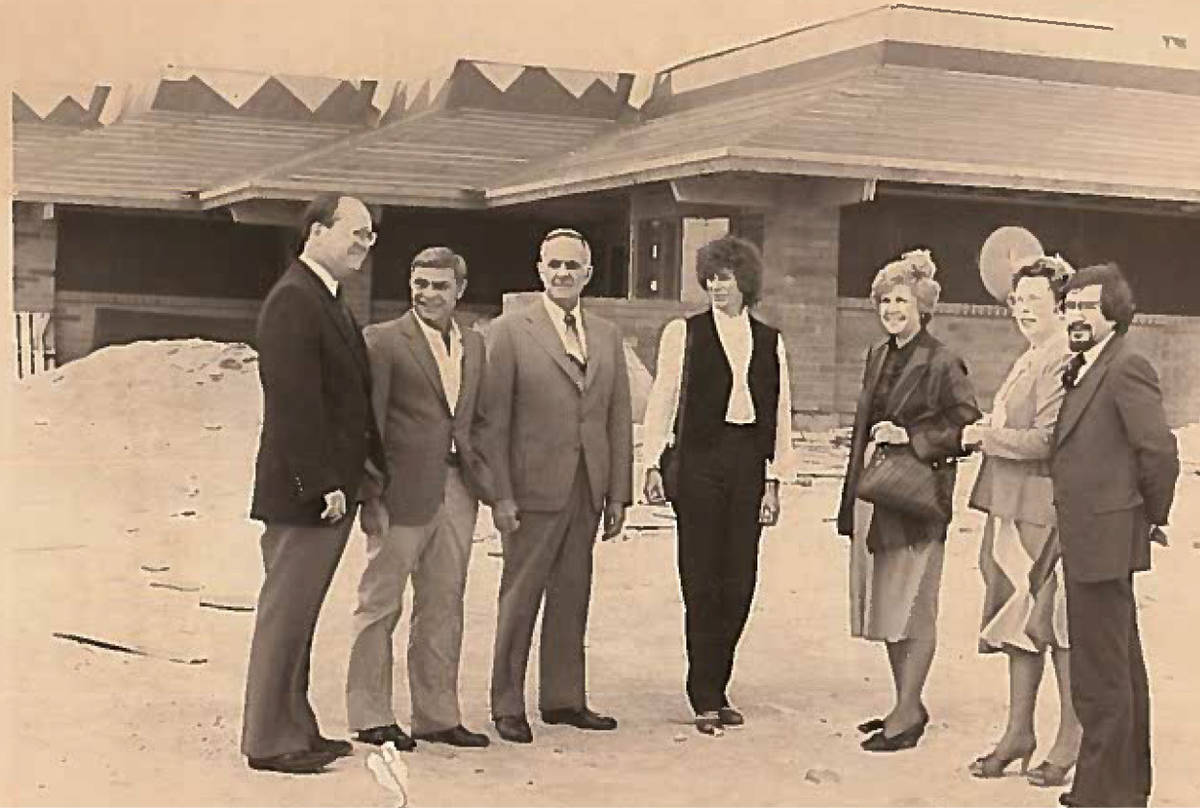 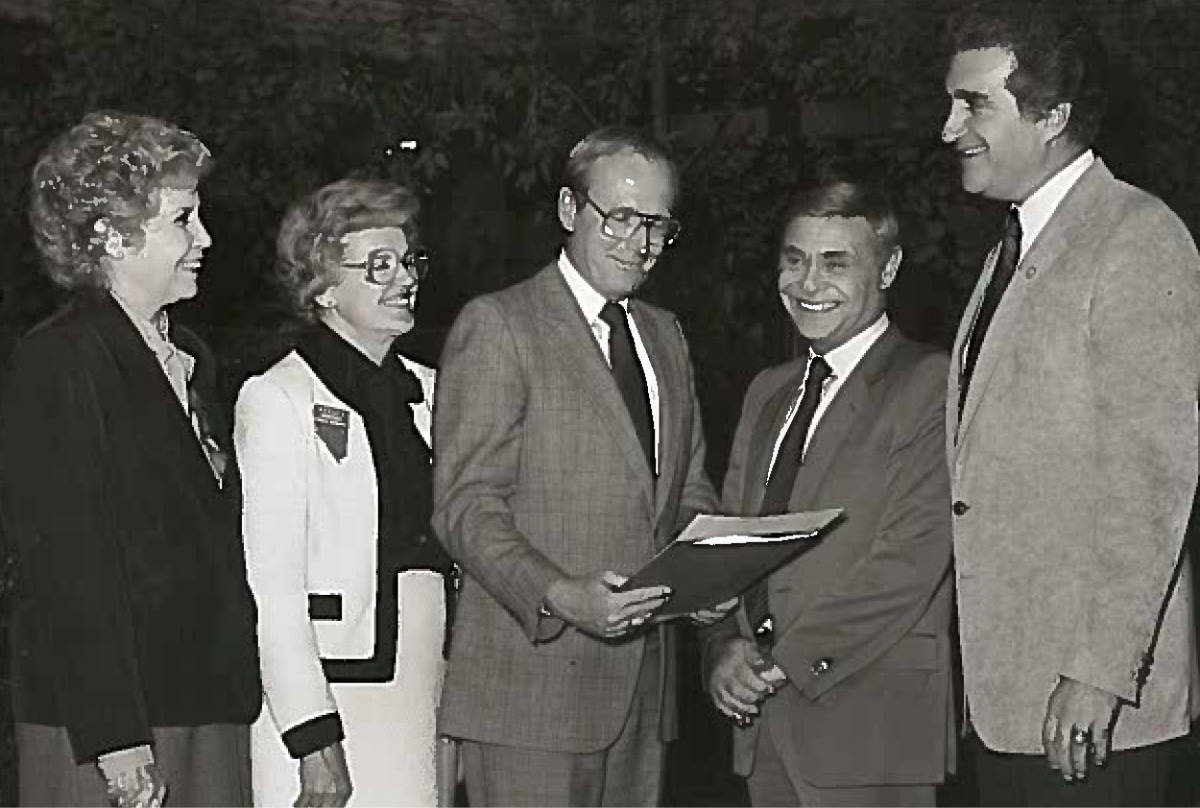 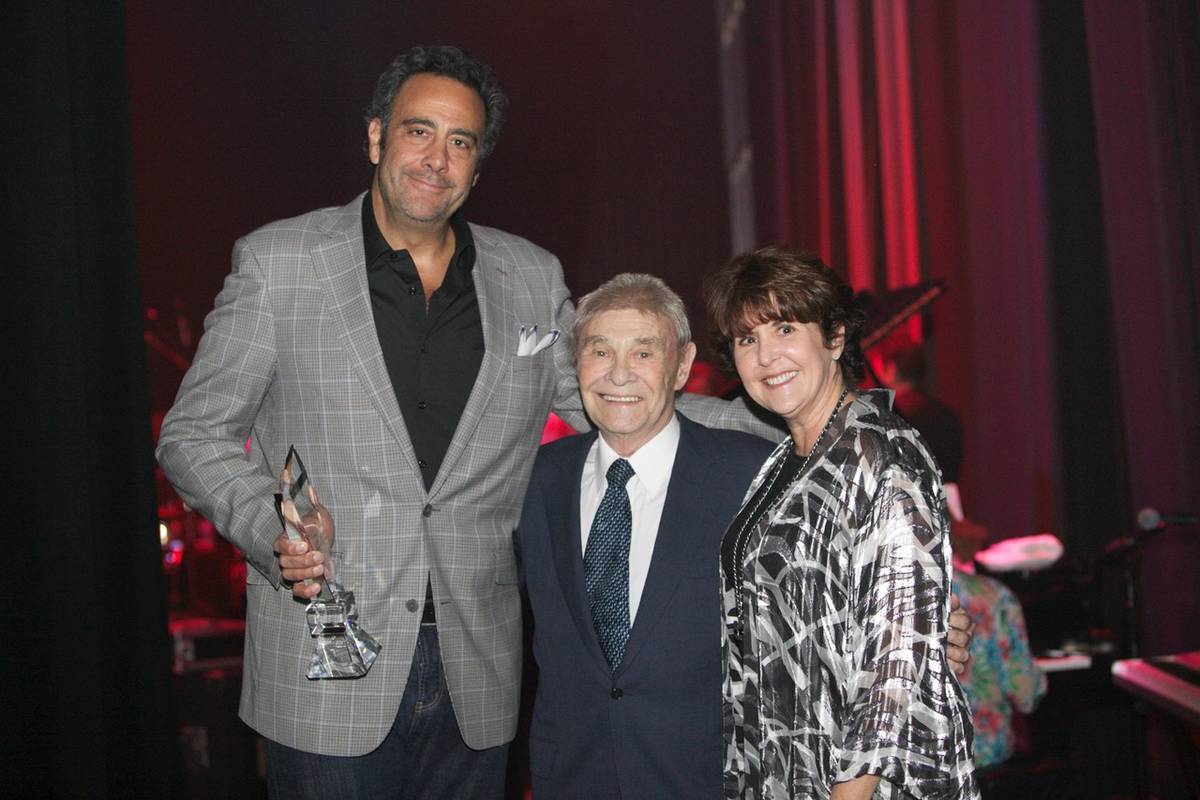 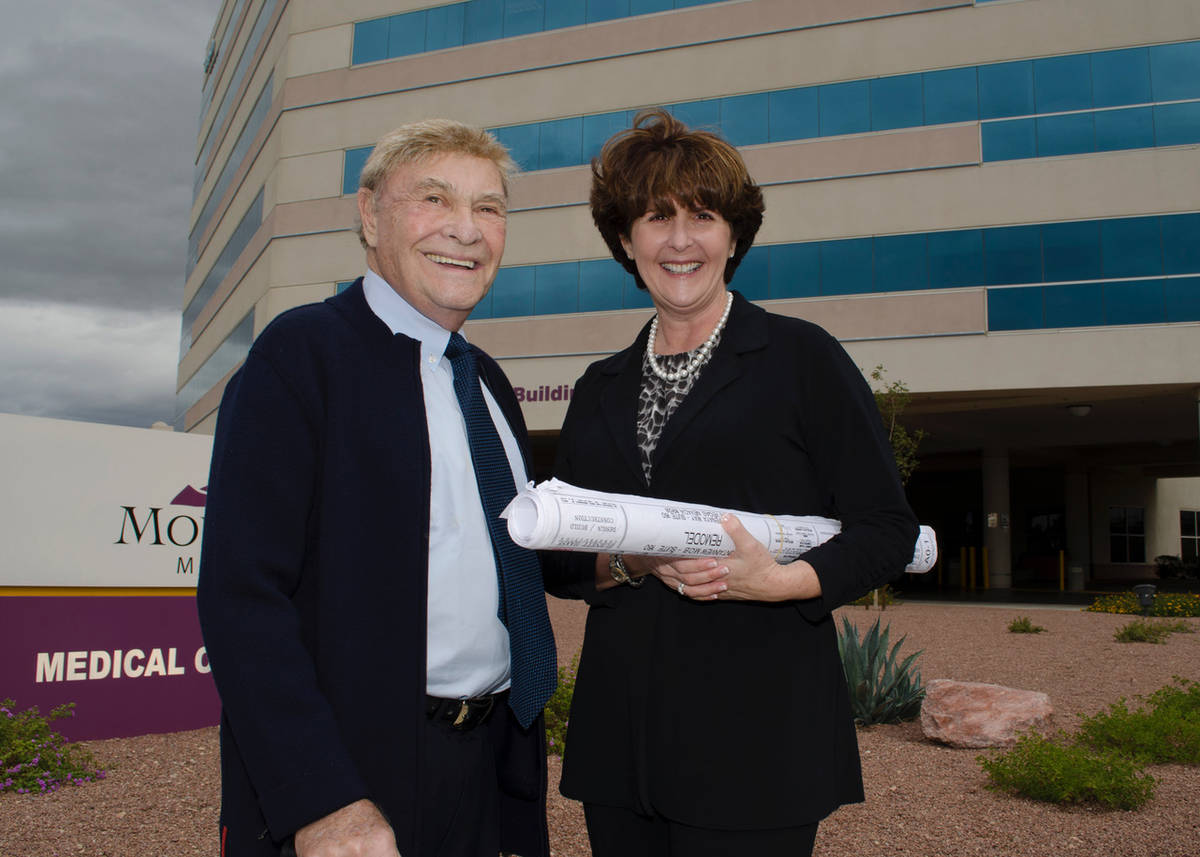 Irwin Molasky, one of Las Vegas’ most influential developers outside the Strip, with projects ranging from condo towers and office buildings to retail centers and golf courses, has died.

“He was very happy at the end of his life,” she said.

Molasky was one of Las Vegas’ best-known and oldest developers. Starting in the 1950s, he and his partners were behind several first-of-their-kind projects for the area, including Las Vegas’ first privately owned hospital (Sunrise Hospital), enclosed shopping mall (Boulevard Mall), downtown office tower (Bank of America Plaza) and master-planned community (Paradise Palms).

More recently, his namesake firm, the Molasky Group of Cos., built apartment projects in Southern California; Portland, Oregon; Jacksonville, Florida; and Seattle, where it completed a once-stalled high-rise project whose original developer, a Tibetan former monk, was sent to prison in 2017 after being accused of fraud.

Outside of real estate, Molasky helped launch an entertainment company that produced TV hits such as “Dallas” and “Knots Landing.”

Molasky was closely tied to UNLV. He donated land that eventually became its main campus and was the founding chairman of the school’s fundraising wing, the UNLV Foundation. He also founded the Nathan Adelson Hospice, a nonprofit end-of-life-care provider that has served more than 75,000 patients in Southern Nevada.

Gov. Steve Sisolak said in a statement that Molasky “was a great friend and an extremely influential figure in the Las Vegas community.”

“Irwin was a true visionary and a pioneer,” Nathan Adelson Hospice President and CEO Karen Rubel said in a statement. “His compassion for people led the way in all he did in life. He always encouraged us to do what’s right, to take care of people and put them first. We will continue to honor that as we uphold his legacy.”

‘I took the plunge’

Molasky was born in 1927 and grew up in Ohio. His dad managed apartment buildings and had a newspaper distribution agency. Irwin went to a military school in Georgia and spent a year at Ohio State University, then decided to transfer to UCLA and moved to Southern California, according to reports.

But, as he told the Las Vegas Review-Journal in 1999, he worked construction jobs to support himself and “just never did matriculate. I did everything. Waterboy, hauled lumber, estimating, then I took the plunge and started design and construction.”

He built a five-unit apartment complex by age 20 and was drafted into the military in the late 1940s but was discharged before the Korean War. After his Army service, he went to Florida for a year to build GI housing, moved back to California and did some construction, and then moved to Las Vegas in 1951, he said in a 2014 interview for a UNLV oral history project.

When he got here, Las Vegas was a small but booming desert city, a ripe place to work in real estate. Clark County’s population had nearly tripled between 1940 and 1950, to 48,300.

“The town was strictly a Western town,” he said in the UNLV interview. “Most everybody knew everybody else.”

He built the Pyramids, a small motel between the Flamingo and the Sands, in 1952. His parents operated the motel, which relied on well water and charged $6 to $20 a night, he told the interviewer.

Molasky also worked on garage additions and patios and built some “spec” houses, or homes without buyers first lined up. But eventually, he and his partners were developing much larger projects.

They included Sunrise Hospital, which opened in 1958; La Costa resort in Carlsbad, California, in 1965; Boulevard Mall in 1968; and downtown’s Bank of America tower in 1975.

In a March 1968 editorial, under the headline “Boulevard Mall Rides New Prosperity Wave,” the Review-Journal wrote that “the finest, most thoughtfully planned area in southern Nevada is the new Boulevard Shopping Center on Maryland Parkway.”

It added: “There is no gathering place in the city with as much charm and grace.”

Molasky started out in Las Vegas’ Mafia days, and two of his early business partners had unsavory résumés: Moe Dalitz, a former Midwest bootlegger-turned-businessman in Las Vegas, with reported ties to, among others, the Purple Gang, a group of notoriously violent gangsters in Detroit; and Allard Roen, who pleaded guilty in the early 1960s to charges of stock fraud conspiracy.

Their development group financed projects in part by tapping the Teamsters pension fund, a pot of labor union money that also bankrolled construction of mob-controlled casinos. Molasky told the Review-Journal a federal investigation ultimately found nothing wrong with the loans. Molasky was never accused of wrongdoing.

Around 1950, Dalitz and other figures acquired Wilbur Clark’s unfinished Desert Inn casino after funding dried up and construction stalled.

Dalitz donated large sums to charities and civic projects, sometimes anonymously, the Las Vegas Sun reported. When he died in 1989, the Sun described him as a “gaming pioneer” and “Las Vegas’ most distinguished citizen for four decades.”

Adelson went on to produce “Dallas” and other shows through entertainment firm Lorimar and had a reported net worth of $300 million. But he eventually lost his fortune and ended up living in a 500-square-foot apartment in Santa Monica, California, with a kitchenette, a beat-up futon and a flatulent dog, Vanity Fair reported.

“His life was like a movie script you wouldn’t even believe — rags to riches to rags,” Molasky said.

Molasky also was linked to the so-called Computer Group, which was indicted in 1990 and got its name for using computers to help with sports bets.

Molasky — who was not charged in the case — had partnered with a defendant to make bets and testified before a federal grand jury, The Washington Post reported.

The Review-Journal later reported that Molasky was given immunity and testified at trial that he had gambled small fortunes.

Molasky’s real estate portfolio grew over the years. He built golf course communities, jet hangars, the Park Towers condo complex east of the Strip, and retail centers, including the 35-acre Best in the West strip mall at Rainbow and Lake Mead boulevards.

His portfolio also included Molasky Corporate Center, a 17–story office building near the Spaghetti Bowl, and several FBI office buildings around the country.

The Las Vegas City Council in 2018 also approved a $59.3 million contract with the Molasky Group to build a four-story, roughly 140,000-square-foot municipal courthouse near City Hall.

Molasky gave media interviews in the 1990s and 2000s but largely disappeared from public life in his later years. According to the San Diego Reader, Molasky reported in 2011 that he had Waldenström’s disease, a rare form of cancer, and that he was in stage 4, the last stage of the disease.

His daughter said Sunday that Molasky was on medication for the disease and that it was under control and not the cause of his death.

In 2000, Molasky told the Review-Journal that he had arrived in Las Vegas with a few thousand dollars. When the newspaper asked him how much he was now worth, he said: “Nobody’s asked me that. I would say I’m well-off.”

Molasky, then 73, added: “I don’t do this for the money. I do it because I take pride in my work and I love what I’m doing. I don’t want to retire.”

His daughter said he will be buried Tuesday at King David Cemetery in Las Vegas.