But less than three years after its debut, Eclipse faces a foreclosure sale next week and has a trail of litigation. 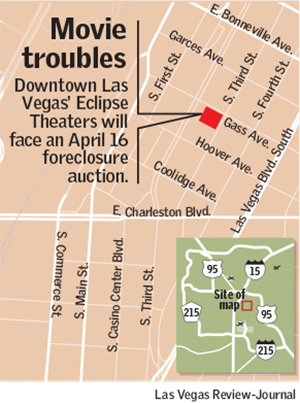 Iszard, for one, figures the upscale movie theater should have been built in Summerlin.

Eclipse is still open and showing movies. But its financial and legal woes show the eight-screen, 72,000-square-foot theater — which sells pricey tickets, has a bar and lounge and offers a menu of chicken and waffles, lobster grilled cheese and other food — has had a rocky ride.

The owner defaulted on a $7.5 million construction loan, and the property is scheduled to come up for sale at a foreclosure auction April 16, according to Clark County records.

Steele or his entities have been sued at least seven times — including by a Caesars Entertainment Corp. executive — since the movie house opened, court records show. On top of that, nearly $129,000 in property taxes, with a $19,000-plus penalty, were owed on the parcel as of Tuesday, according to county figures.

But according to Salas, things “started to go a little bit off the rails” after the theater was up and running. Steele “wasn’t really hitting the numbers” he wanted and “fell more and more behind” on his payments, Salas said.

He said that Steele put in the work and money, but “it’s all in jeopardy right now.”

The lawsuits allege that Steele or his companies failed to make payments. The Review-Journal did not come across any claims that Eclipse was at risk of closing or any allegations of suspect financial activity.

The three-story building — but not the theater business inside — is on the market for $12 million as an investment sale to a new landlord.

Listing broker Devin Lee of Northcap said that Eclipse, 814 S. Third St., at Gass Avenue, is profitable and that Steele still wants to operate the theater.

Steele did not respond to multiple requests for comment for this story.

Developers by no means ignore downtown, but there are far more residential and commercial projects in suburban areas like Summerlin, Henderson and the southwest valley.

Steele — who used to work in the finance department at Zappos chief Tony Hsieh’s side company Downtown Project — bought the land for Eclipse in 2014, property records show, and held a groundbreaking in 2015.

In a news release about the event, his group said the project “is expected to be a boon to the local economy,” bringing jobs and traffic “to a resurgent downtown area.”

Mayor Carolyn Goodman also was quoted in the news release, saying the project is “great for downtown. … Go Vegas!”

The grand opening ceremony was in December 2016. Eclipse has big recliner seats with call buttons to summon food-and-beverage servers, and adult tickets cost up to $18 each, its website shows.

As recently as spring 2018, Steele was pursuing expansion plans. In an email that was included in court records, he told a lender that he had a letter of intent “in hand to expand into one more Vegas location” and that he was “negotiating the lease terms.”

But by then, lawsuits were already piling up.

As shown in court records, litigation has included:

■ Project contractor United SS Fabricators sued Eclipse in May 2017, alleging it was owed $46,900. The lawsuit was voluntarily dismissed a few months later.

■ In January 2018, Eclipse’s mortgage-holder sought a court-appointed receiver to take charge of the property. It dropped the case after it sold the loan.

■ L33t Gaming sued Steele and Eclipse in June 2018, alleging it was owed more than $204,000 for a loan and more than $1.2 million for selling furniture, fixtures and equipment to Eclipse. The case remains open.

■ Caesars Entertainment’s chief information officer, Les Ottolenghi, also sued Steele and Eclipse in October. According to court papers, he issued $80,000 in refinancing funds but did not receive any payments by the time the loan matured. Ottolenghi, who personally made the loan, was awarded more than $92,000, as well as attorney fees and costs.

Attorneys for these and other plaintiffs did not respond to requests for comment or declined to give interviews. Caesars spokesman Rich Broome said Ottolenghi declined to comment.

Lawyers for Steele could not be reached for comment.

Salas said that he “came out just fine” in the end but that it was hard to watch Steele struggle with the project. He also said the theater was built in a “redeveloping” area.

“We thought it had a pretty good chance,” he said.

The Bureau of Reclamation said that it will reopen Hoover Dam to the visiting public starting Tuesday.