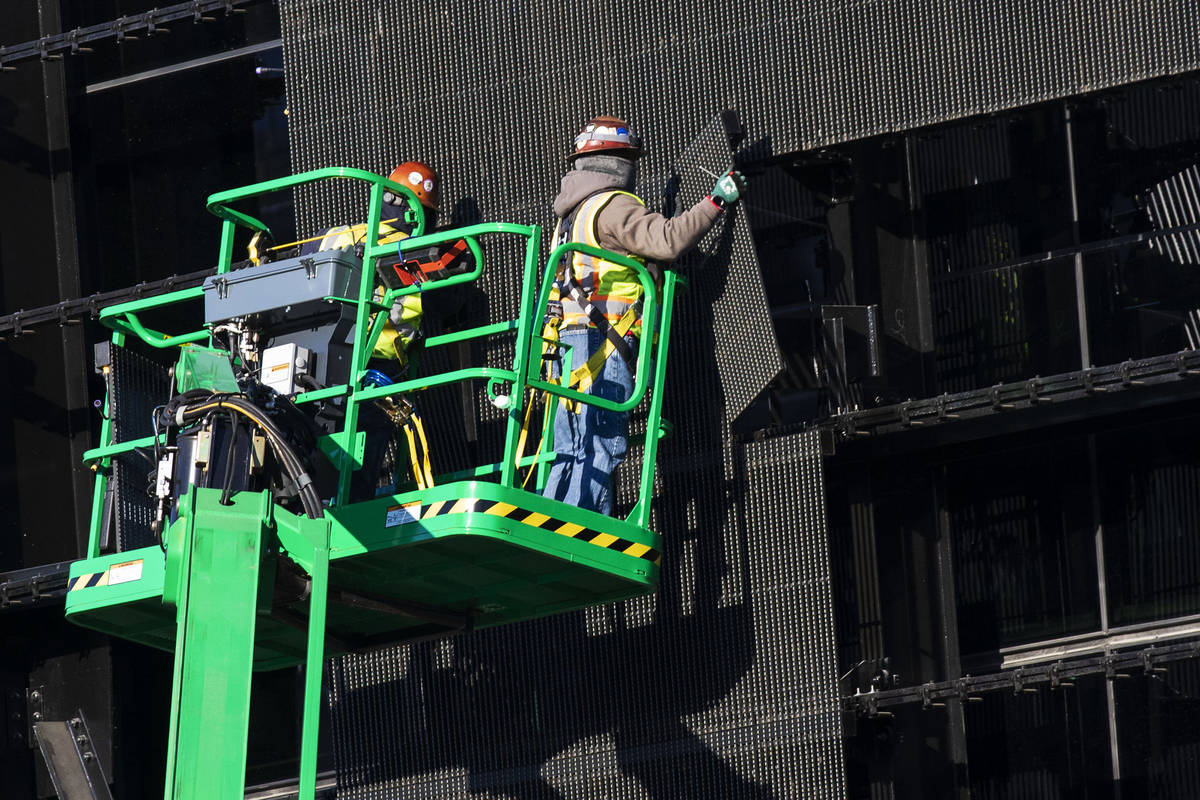 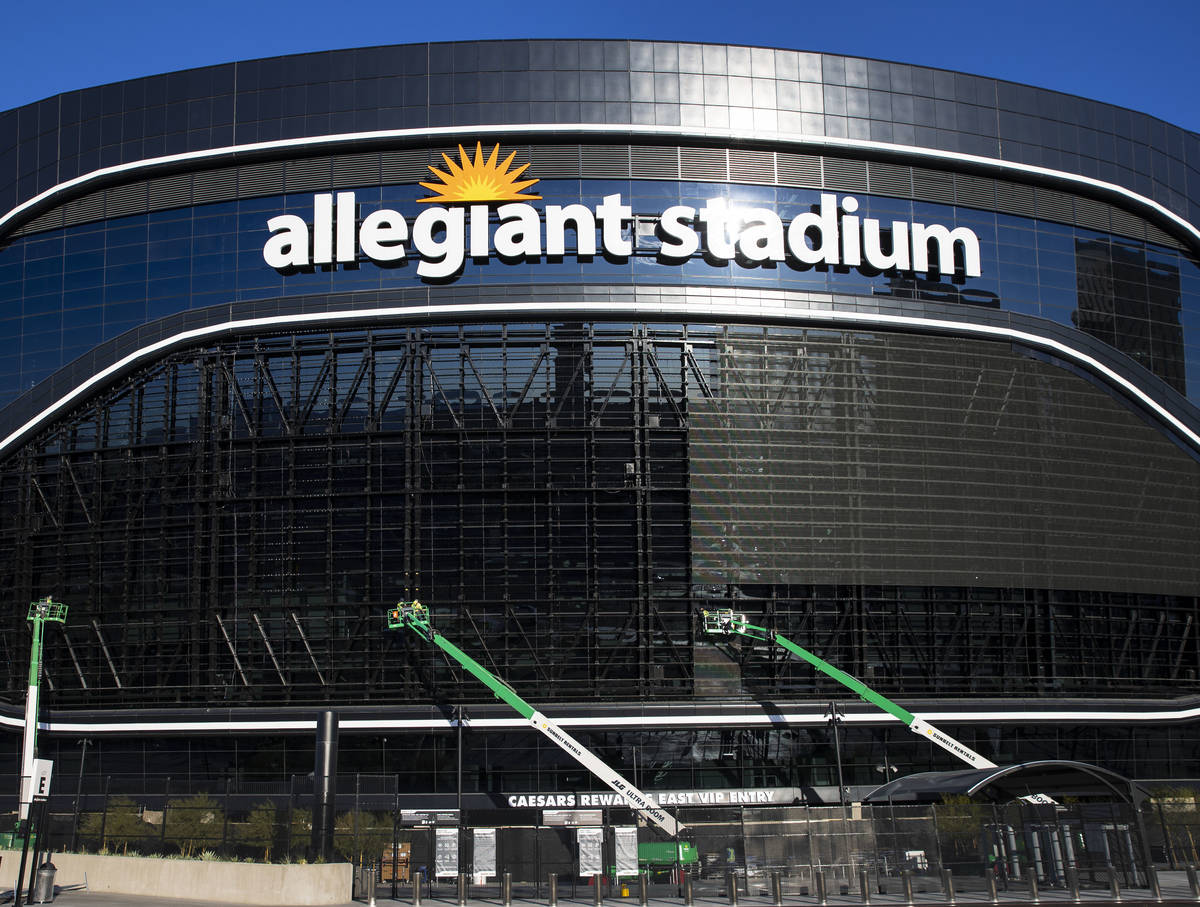 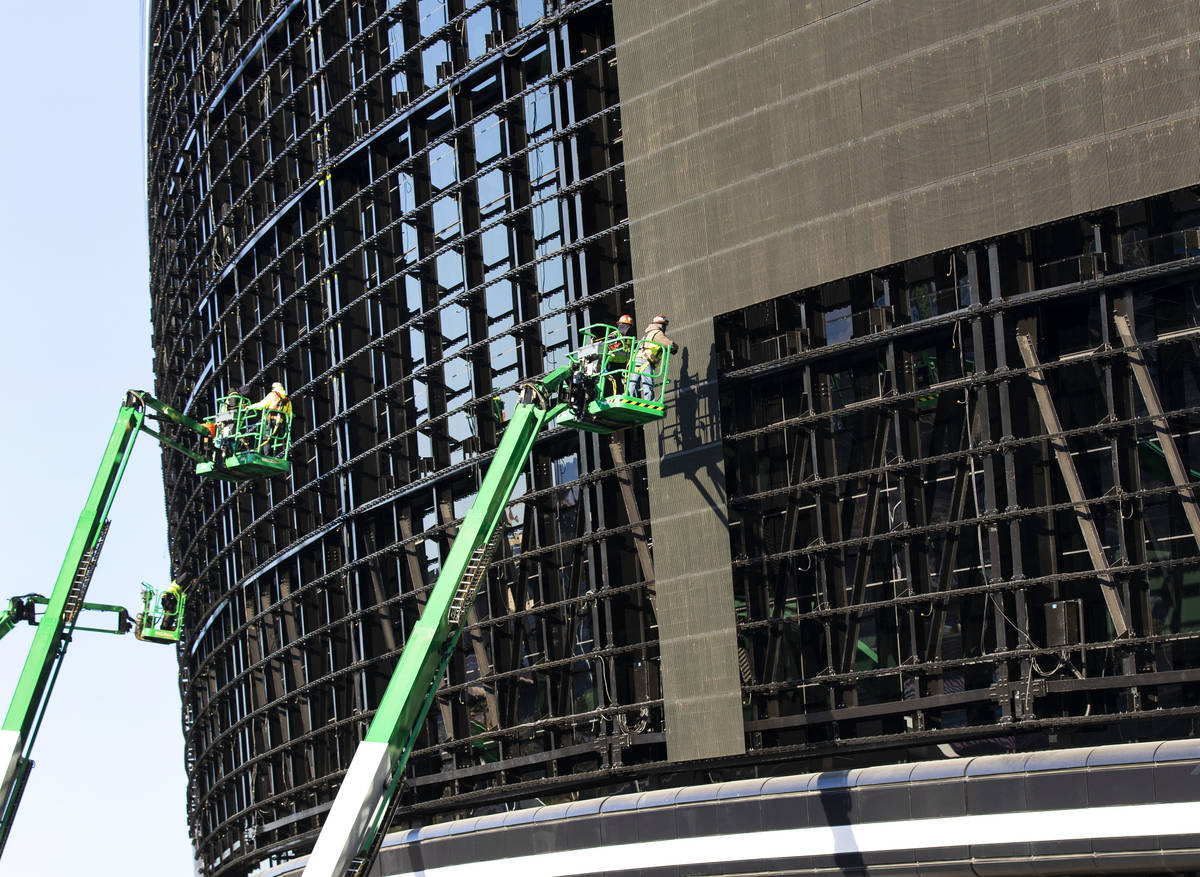 The screen, spanning 27,600 square feet in area, is being temporarily taken down to reposition the media mesh panels, according to documents submitted to Clark County.

Prismview, out of Logan, Utah, is the contractor on the project, while Summit Swing Stage will carry out the installation work.

The media mesh screen can display images on a portion of the stadium exterior facing Interstate 15 but not impede the view of those looking out from inside the stadium.

Crews are revising the positioning of the media mesh panels on Allegiant Stadium. None of the supporting structural steel framing need to be modified, but relocation of some of the structural steel clamps is needed. #vegas #raiders #stadium pic.twitter.com/CBAyhCLxjE

None of the supporting structural steel on the stadium will need to be modified as part of the work, but some of the clamps that hold the screens in place will need to be repositioned, according to the documents.

The video board stands 80 feet tall and stretches 345 feet long and is the largest exterior sign at Allegiant Stadium.

After being installed last year, the sign underwent testing in September but was never fully functional during the Raiders inaugural season at the stadium.

The original contract value for the screen’s installation was $603,834, according to building permits.

The stadium also features a marquee sign just to the north of the media mesh screen on Dean Martin Drive that has been in operation since before the stadium’s first event, the Raiders’ Sept. 21 game versus the New Orleans Saints.

The repositioning work has nothing to do with any issues related to impacts to traffic on I-15 or air traffic at McCarran International Airport, as the sign was part of the exterior sign package that was approved by the Clark County Commission in November 2019.

The Nevada Department of Transportation had reservations about the screen and what its effects could be to traffic on I-15, but those were addressed before the sign package was approved, according to Tony Illia, NDOT spokesman.

“Initially, there were concerns that a large digital screen alongside Interstate 15 would create a glare,” Illia said. “However, after meeting with county officials, our concerns have since been addressed.”

Once complete, the screen will be among the largest free-standing screens in the Las Vegas Valley. Resorts World features a 100,000-square-foot LED screen on its west tower that went live in July. The sign, which sits above the Harmon Corner retail center on the northeast corner of Las Vegas Boulevard and Harmon Avenue, is 71 feet tall by 359 feet long, or 25,517 square feet in area.