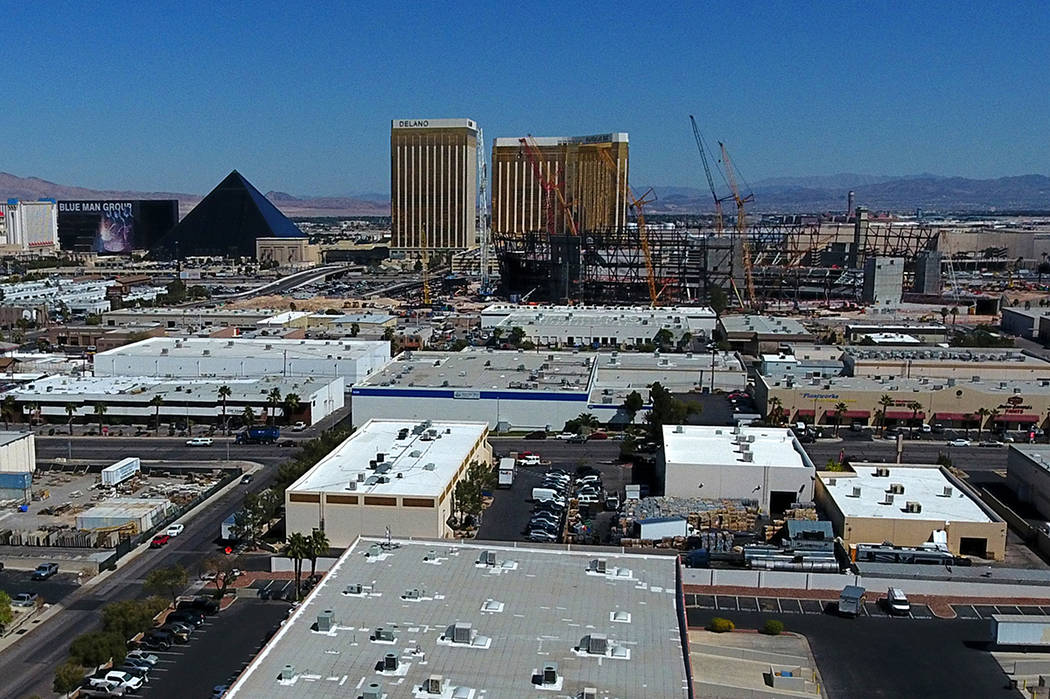 Aerial view of Raiders stadium, right center, in Las Vegas as it continues to take shape between an industrial area and the Las Vegas Strip on Friday, March 29, 2019. (Michael Quine/Las Vegas Review-Journal) @Vegas88s

David Copperfield has wowed audiences for decades with illusions like walking through the Great Wall of China or making the Statue of Liberty vanish.

He also has land and a private magic museum west of the Strip, near where the Raiders are building a 65,000-seat football stadium — a project that’s sparked a surge of interest in the surrounding area.

Brokers and buyers have been calling nearby landlords to see if they’d sell, and the famed magician is no different. Copperfield told the Las Vegas Review-Journal that people have approached him about selling his real estate or partnering on projects there.

He and his neighbors might be sitting on gold mines, though the stadium has not led to waves of sales or listings in the area. At least not yet.

There is “no real incentive” for landlords to sell before the stadium is done, and a lot of them are waiting to make any decisions, said Mike Mixer, executive managing director of brokerage Colliers International’s Las Vegas office.

Still, he noted, a few have taken advantage of the “initial hype.”

The $1.84 billion stadium project, at Russell Road and Interstate 15, about a mile west of Las Vegas Boulevard, was dumb luck for nearby landlords. A few bought property right across from the stadium site as recently as 2015 — two years before the football team purchased its land — and others have owned parcels much longer, according to county records.

Jennifer Josephs’ family has owned a 2-acre parcel on Polaris Avenue right across from the stadium site since at least the late 1970s.

“Of course we have been approached by people testing our interest in selling but we are definitely not interested,” Josephs said in an email.

Her tenant has put in more than $2 million worth of improvements for marijuana cultivation and production, she added.

Aerial view of Raiders stadium, right center, in Las Vegas as it continues to take shape between an industrial area and the Las Vegas Strip on Friday, March 29, 2019. (Michael Quine/Las Vegas Review-Journal) @Vegas88s

Las Vegas contractor Grigor Gevorkian, who also owns a 2-acre parcel on Polaris across from the Raiders, which he bought in 2015, said he’s been getting a few calls every month, mostly from brokers.

But he noted that he’s a builder and is thinking of developing the site himself.

Jennifer Lewis, a vice president with Lewis Management Corp., operator of a decades-old industrial park just north of the Raiders, said her group has researched some stadium areas and “heard from a bunch of different users with a lot of different ideas for our site.”

But she added: “We’re not sure what the right fit is.”

Not every property owner set off fireworks when they heard the team was moving in.

Sustaining a business near the stadium could be a challenge

Copperfield has owned real estate at Russell Road and Valley View Boulevard, a short walk west of the stadium site, since at least the 1990s, county records indicate. Asked if he got excited at the prospect of selling his land and warehouse for a pile of cash, Copperfield said “not at all.”

The entertainer gave no indication that he is trying to sell, saying he wants to protect and expand the magic history in his building.

Gevorkian also didn’t think he hit the jackpot when the stadium was announced.

He noted that Las Vegas has a long history of developers pitching projects and never following through, though he did get excited when the stadium started to take shape.

Three properties near the new Raiders stadium sold for high prices after the football team bought its project site.

‘Money on the table’

Nevertheless, it didn’t take long for a neighbor to cash in after the Raiders purchased their land in May 2017.

More than a year later, in November, developer Osprey Real Estate Capital and Huntington Hotel Group acquired a 2-acre industrial site on Polaris Avenue, just west of the stadium, for $6.5 million, or $3.15 million per acre.

Those are the only parcels directly across from the stadium that have sold since the Raiders closed escrow, property records indicate.

A possible reason for the dearth of deals: the Raiders are scheduled to move to Las Vegas from Oakland, California, next year, and property values could rise as the stadium gets closer to opening.

Cushman & Wakefield broker Travis Noack, an industrial-property specialist, said a lot of landlords are saying they won’t do anything yet, as they don’t want to risk “leaving any money on the table.”

Once the stadium is finished, “the land values will be even higher than they are now,” said Realty Investment Group owner Al Barbagallo, who brokered the sale to Osprey and Huntington.

Las Vegas has long been a place that gets giddy for real estate, but there’s no guarantee the Raiders will spark a construction boom.

Neighboring properties are mostly chopped into small parcels, and ownership is fractured, making it harder for developers to cobble together big project sites. Moreover, the stadium is forecast to host 46 events annually, meaning it would be closed and not generating foot traffic for nearby businesses the vast majority of the year.

Still, the football team will almost surely be the neighborhood’s most exciting arrival in some time.

Lewis, for one, said the stadium beats the burger place up the street at Tropicana Avenue and I-15.

“We were just excited when they opened In-N-Out. … This is certainly much better than that,” she said.