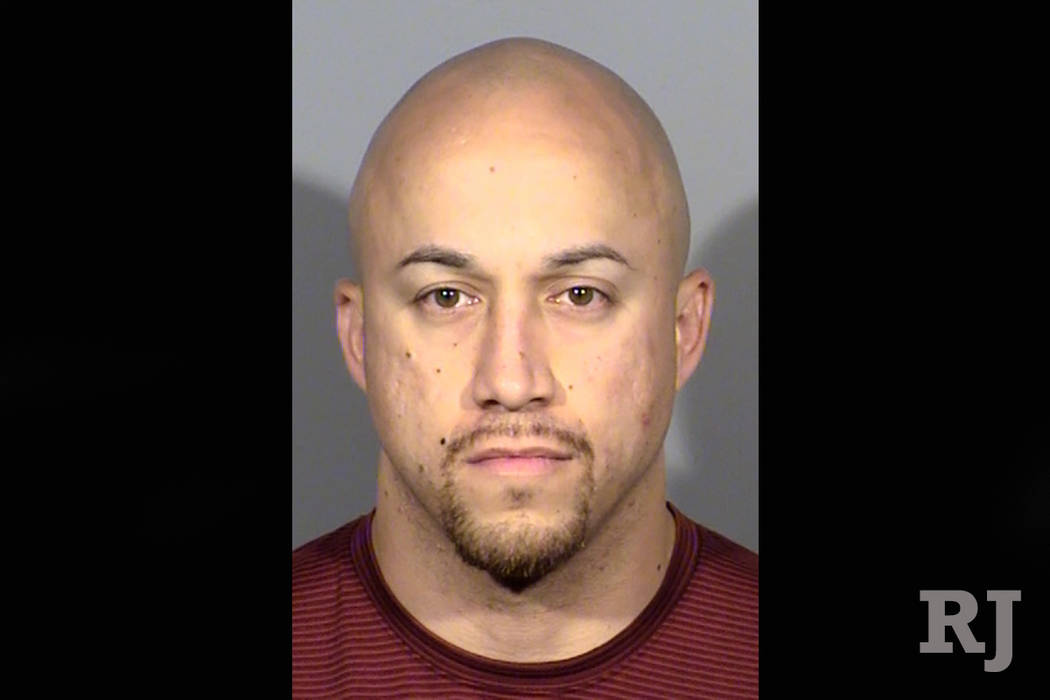 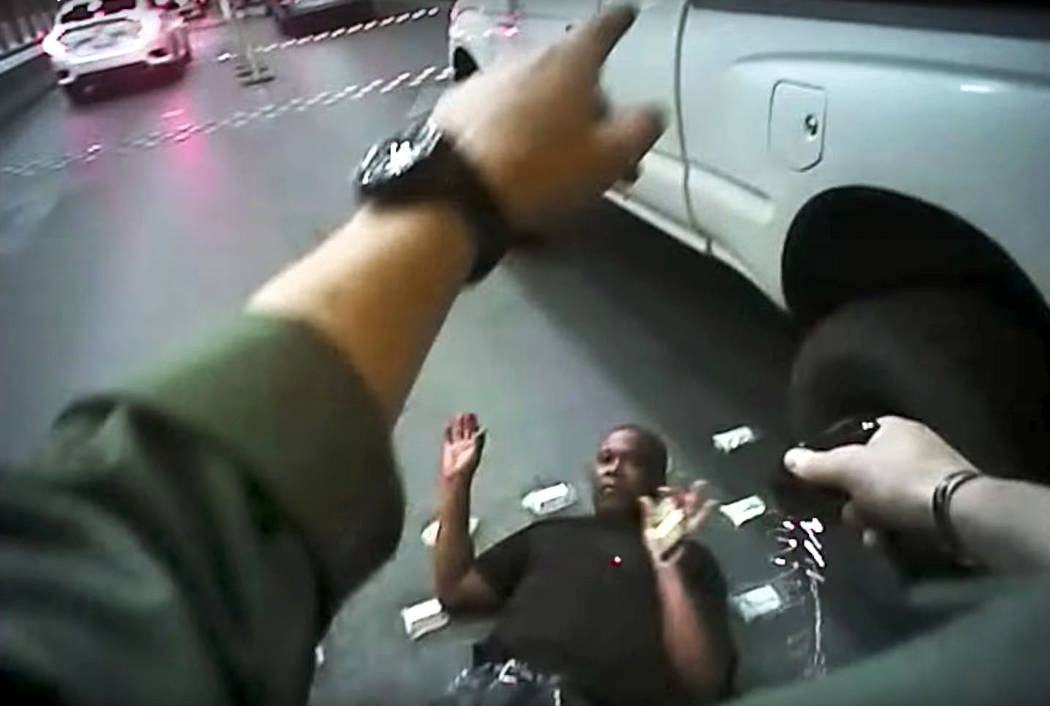 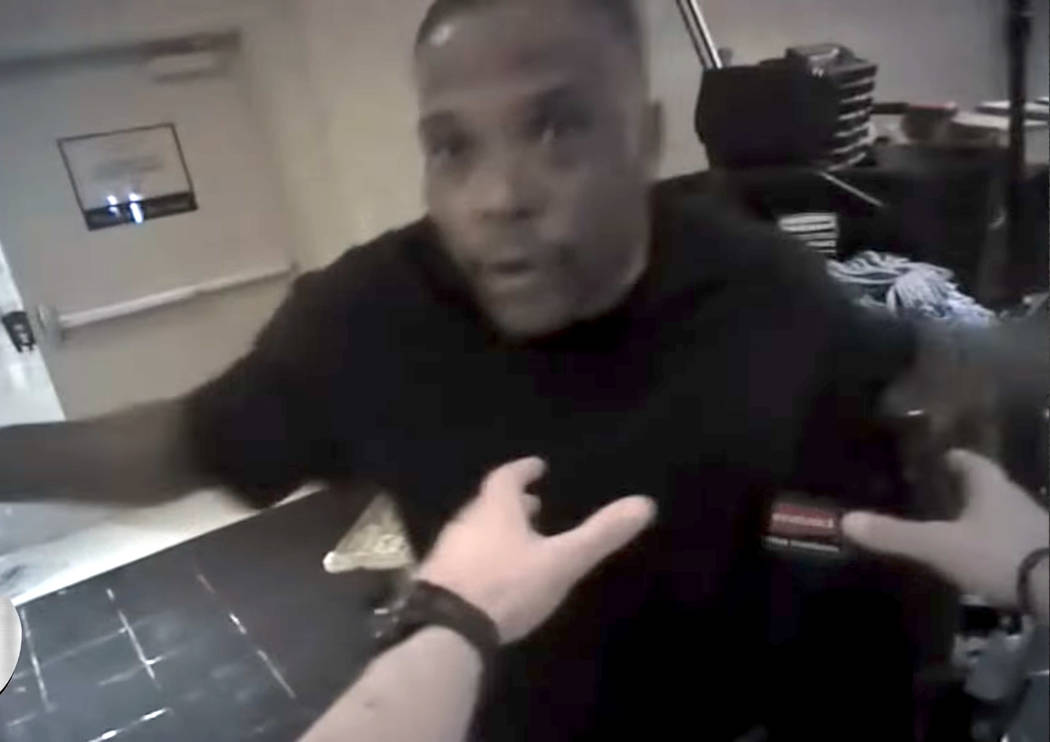 A Las Vegas police officer told officer Kenneth Lopera to release his chokehold on Tashii Brown, but the officer continued his hold for another 46 seconds, a Metropolitan Police Department report on the officer’s arrest shows.

The report obtained by the Las Vegas Review-Journal on Wednesday details numerous violations of department policies and training, beginning when the officer first began to chase Brown, also known as Tashii Farmer, on the night of May 14. Clark County Sheriff Joseph Lombardo said Monday that the department would arrest one of its own on charges of involuntary manslaughter and oppression under the color of office in connection with Brown’s death

The Clark County coroner’s office said Monday that Brown died from asphyxiation due to police restraint. His death was ruled a homicide.

Lopera places Brown in a chokehold 2 minutes and 58 seconds into the struggle, the report shows.

“Is he out yet?” the officer asks 15 seconds later. He then repeats the question twice.

Another officer arrives on the scene 3 minutes and 25 seconds into the struggle.

“Let him go, Ken,” the officer is heard saying.

“Are you sure?” Lopera said.

“Yeah,” the officer replies 3 minutes and 26 seconds into the struggle. Lopera released the hold on Brown at 4 minutes and 11 seconds, the report shows.

The exchange between the two officers can be heard clearly when the sound from previously released body camera footage is enhanced.

Brown initially approached Lopera and another uniformed officer having coffee about 1 a.m. May 14 inside The Venetian, 3355 Las Vegas Blvd. South. The arrest report shows he was sweaty and told the officers it was because he had run from people who were chasing him.

He asked the officers if they knew the location of a drinking fountain, and he ran off when Lopera tried to grab him. Lopera chased the man out of the hotel and stunned him with a Taser when he saw the man trying to open the tailgate of a truck parked near the property’s rear.

The arrest report shows the men in the truck did not feel threatened by Brown and notes Lopera did not have “reasonable suspicion or probable cause” to chase him.

Lopera stunned Brown with a Taser seven times — engaging the stun gun for five seconds six times and for nine seconds the final time, the report shows. Police Department policies are to use the Taser three times, for five seconds each cycle, and then move on to another type of force.

The Taser’s prongs attached to Brown’s lower back, causing “neuromuscular incapacitation” that would have made it difficult for Brown to move, the report shows.

Throughout the encounter, Lopera was screaming at Brown to get on his stomach so he could be handcuffed. But the longest time between stuns was six seconds, so Brown never had a reasonable opportunity to do so. The arrest report also notes that Brown was positioned on his stomach several times as the officer yelled at him to comply.

Lopera’s commands also contradicted each other. He told the man, “don’t move” and “get on your stomach.” The report also notes that several commands for Brown to lie on his stomach were issued while Brown was on his stomach.

Brown was struck in the head 10 to 12 times after he was stunned with a Taser, even though he was not displaying aggressive resistance. Detectives investigating the case concluded the man was trying to pull the Taser prongs out of his back, trying to avoid being handcuffed and protecting his face from the punches, the report shows.

The report first describes the chokehold the officer used on Brown as the lateral vascular neck restraint, the only neck hold allowed under Metro policies, but later describes it as a rear naked choke based on statements Lopera made to other officers after the struggle.

“I tased him, fought a little bit and choked him out,” Lopera told an officer.

A lawyer for the Las Vegas Police Protection Association, the Metro officers’ union, stopped Lopera from giving detectives a walk-through of events that night. The union bailed out Lopera from jail for $6,000 immediately after he was booked into the Clark County Detention Center on Monday and will defend him through the case.

Association President Steve Grammas said Monday that Lopera did not intend to kill anyone.

Lopera’s arrest marks the first time in nearly three decades a Metropolitan Police Department officer has faced charges in connection with a police shooting or in-custody death. Both charges carry sentences of one to four years in prison.