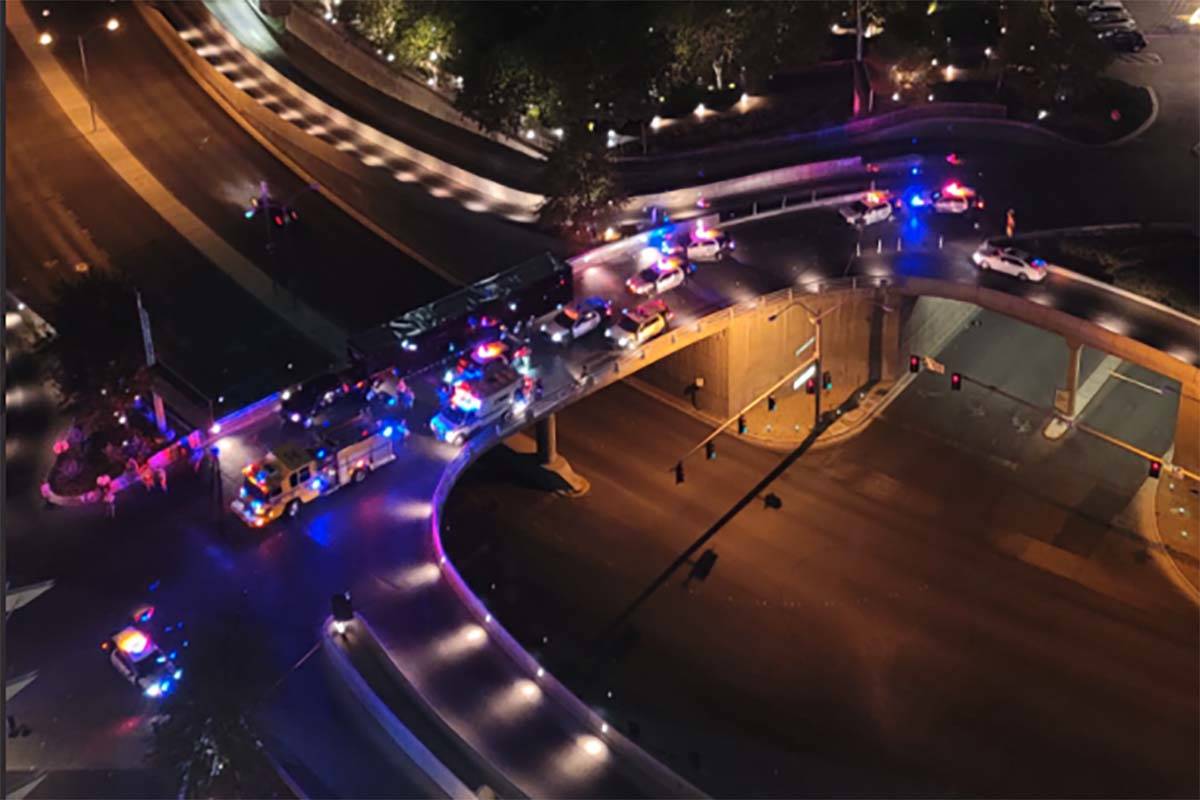 Lt. David Gordon said the shooting unfolded at 11:08 p.m. among a group of people in front of Aria, 3730 Las Vegas Blvd. South.

Multiple social media posters on Twitter claimed the shooting took place during a birthday party for rapper MoneyBagg Yo, with posters distributing a video of the shooting. Las Vegas police Capt. Dori Koren later confirmed that the shooting happened at an event involving the rapper.

“Ultimately what we understand happened at this point and time was there was a rapper personality, goes by MoneyBagg Yo, who was having some type of event at the Aria,” Koren said.

Koren said the rapper was at Aria and “went outside to the valet area to receive a gift, which was a vehicle.”

Koren said a crowd of about 80 to 100 people then gathered nearby. As the crowd gathered, the captain said, a fight broke out.

“That fight, it turned into a shooting where one person was struck with gunfire in the leg,” Koren said. “A non-life-threatening injury.”

Koren said the shooter was a man. He declined to release more details on the identity of the shooter.

“We do have some really good leads that we are pursuing at this time, and we are confident we will hold this person accountable for the shooting,” Koren said.

The victim was treated and released at an area hospital. MoneyBagg Yo later said in a post circulated on Instagram that he was not the target of the shooting, but he confirmed he was in Las Vegas on Tuesday night.

“Shot at who?” MoneyBagg Yo is heard saying on the post.

Welcome to Las Vegas… Shooting at the Aria thanks to Sisolak’s new approved visitors! pic.twitter.com/eHOX259vur

I heard six gun shots. Now 11 police cars, paramedics and firefighters are outside my 35th floor room @VdaraLV next to @AriaLV. Is it not safe in a 5star place?! #vitalvegas #nowhereissafe pic.twitter.com/oy4nnmNcK1

The crime at Aria is the latest in a string of shootings on the Strip.

On Saturday morning, a 27-year-old man was shot during a fight in front of Paris Las Vegas. The victim survived.

On Sept. 9, Las Vegas police shot and killed a man on Las Vegas Boulevard South near Elvis Presley Boulevard. Police said the man, Matthew Patton, 37, charged at officers with a knife. Police said they investigated another shooting in July front of the Bellagio. No one was injured in that shooting.

The Wynn Las Vegas also recently filed a lawsuit against more than 20 unknown individuals who engaged in a Labor Day weekend fight at the Encore.

Police confirmed in early September that they have faced increased violence on the Strip, mostly fights along the tourist corridor, causing at least one casino operator to increase both security and room rates to quell violence. Police said at the time that the criminal activity would not be tolerated and there would be an increased law enforcement presence on the Strip.