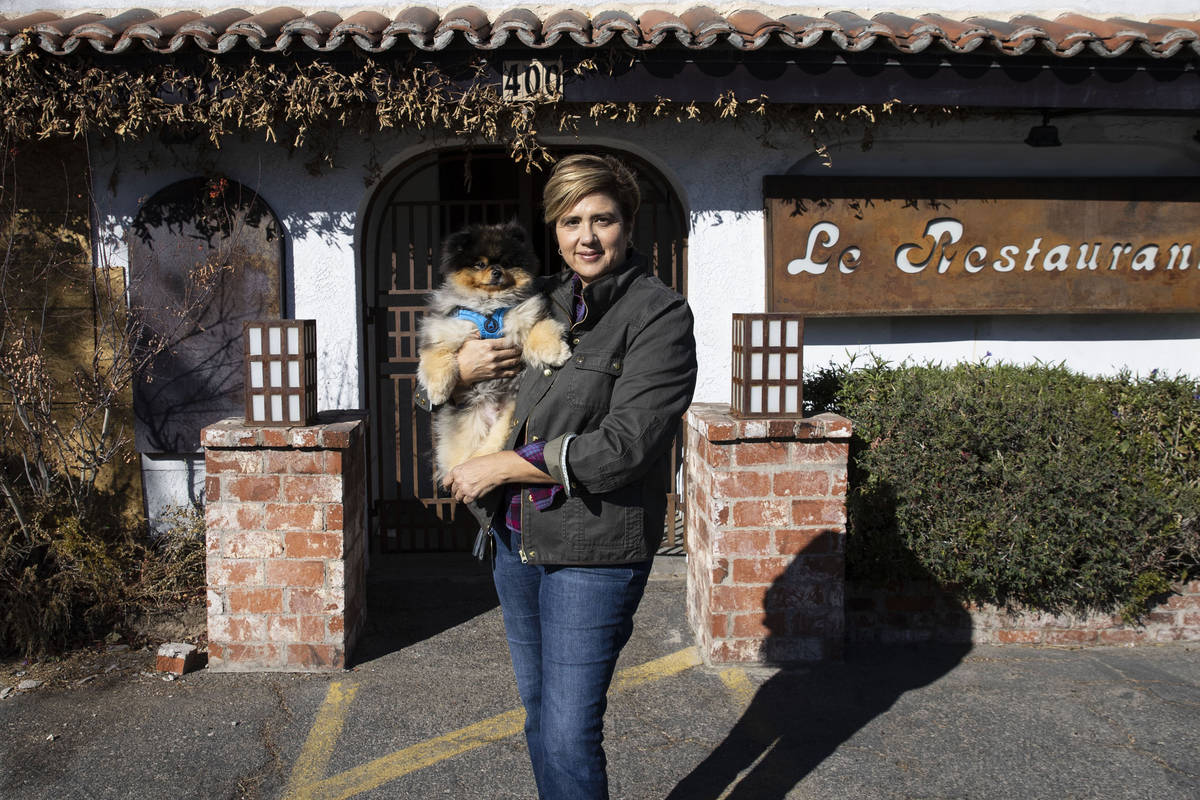 Diana Maisondieu-LaForge, owner of Pamplemousse restaurant, poses for a photo with her dog, Jacques Cousteau, in front of her closed restaurant on Monday, Nov. 9, 2020, in Las Vegas. (Bizuayehu Tesfaye/Las Vegas Review-Journal) @bizutesfaye 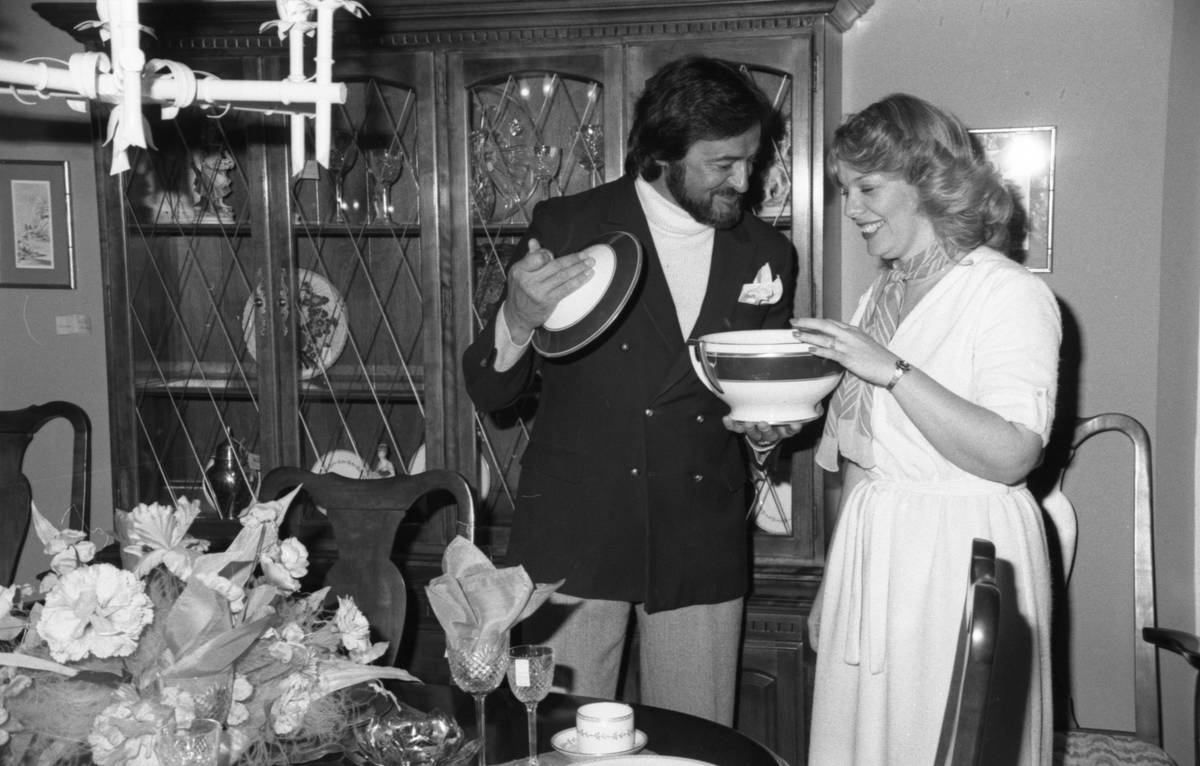 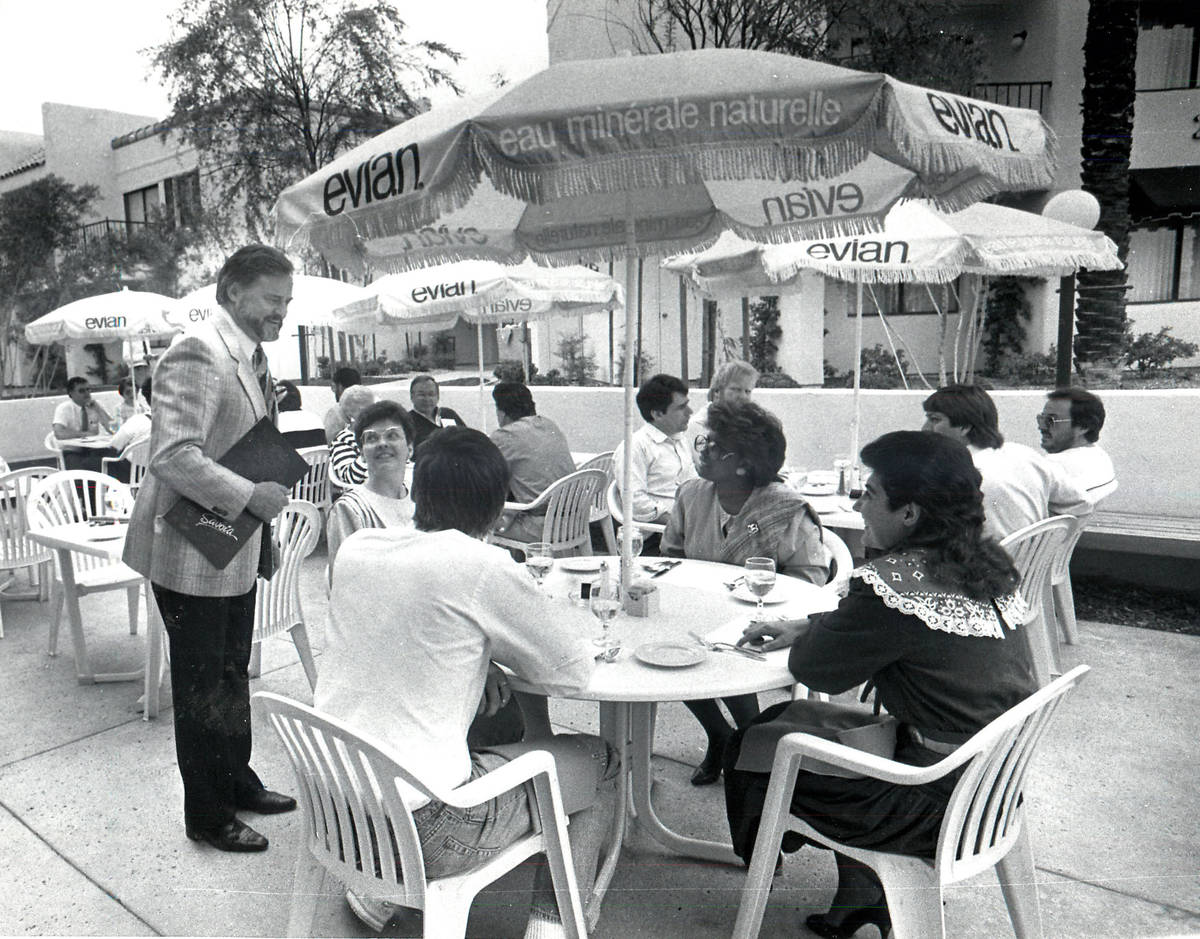 The outdoor dining scene at Pamplemousse restaurant in 1986. (Review-Journal file) 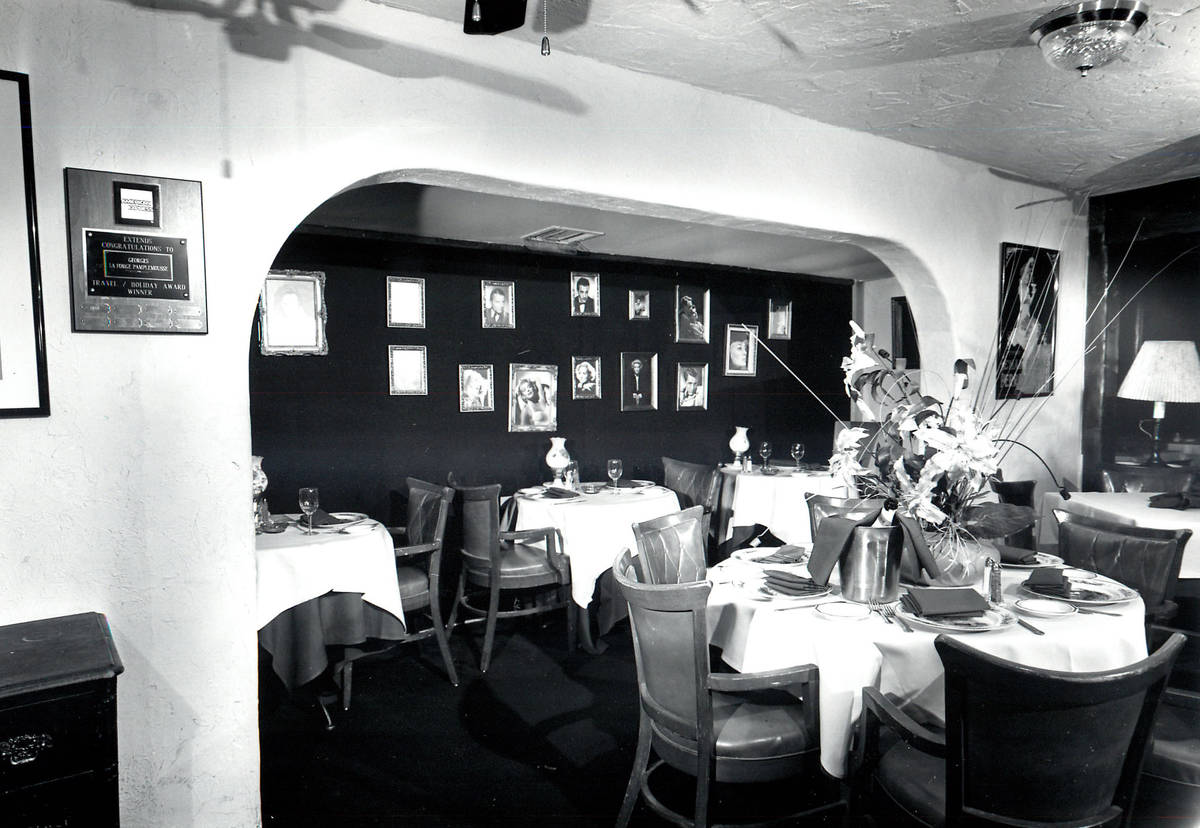 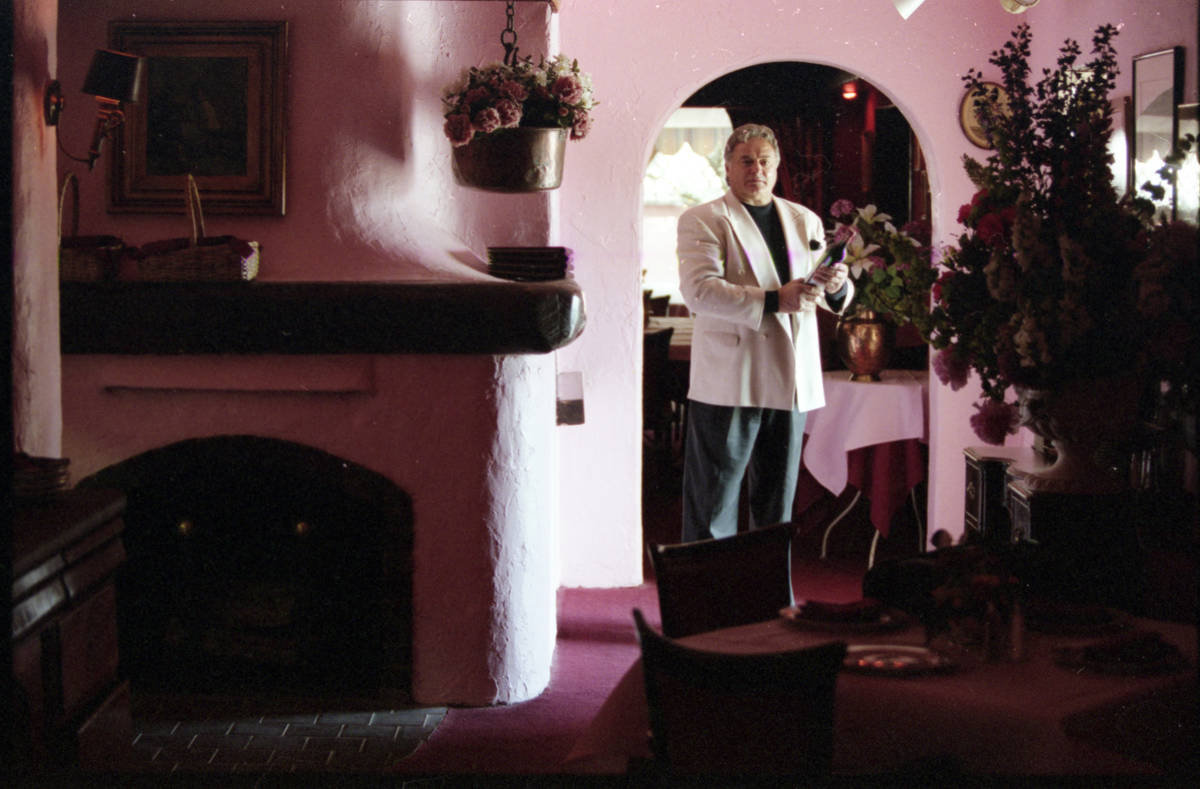 Owner Georges LaForge at his Pamplemousse restaurant in 1997, which opened in 1976 in a stucco house at 400 E. Sahara Ave. (Review-Journal file) 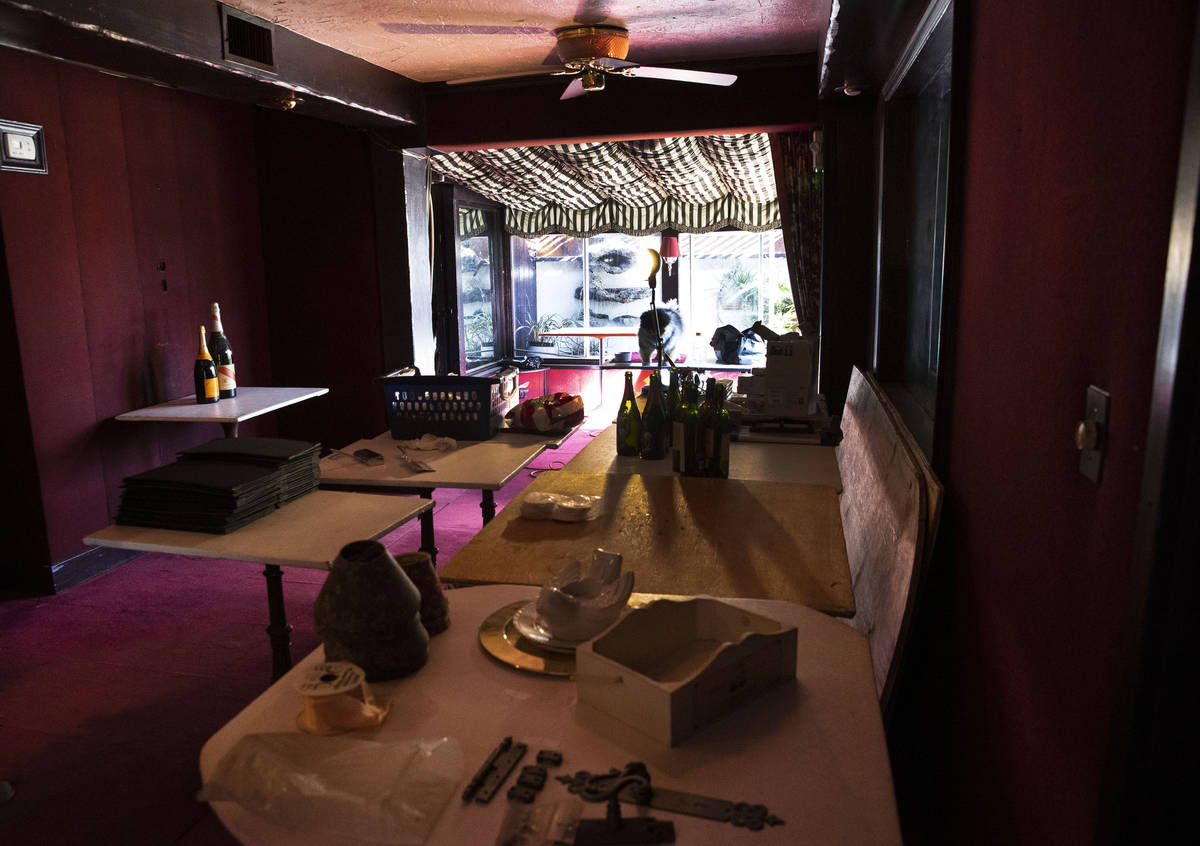 The interior of a closed Pamplemousse restaurant is seen, on Monday, Nov. 9, 2020, in Las Vegas. (Bizuayehu Tesfaye/Las Vegas Review-Journal) @bizutesfaye 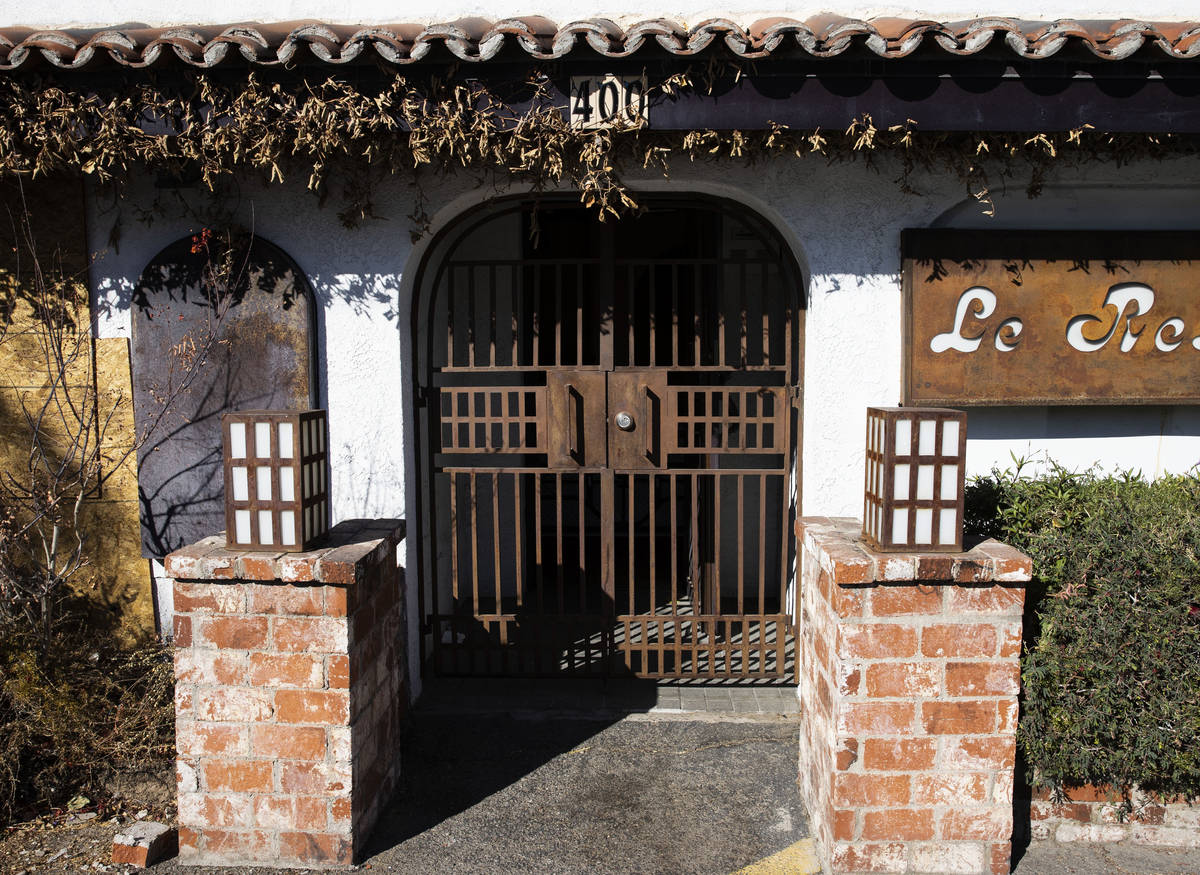 The storied, 44-year history of Pamplemousse Le Restaurant has come to an end.

Diana Maisondieu-LaForge, the widow of restaurant founder Georges LaForge, said the decision to not reopen has been long and difficult.

“I’ve thought about this for about nine months,” she said at the restaurant at 400 E. Sahara Ave.

She remembers March 15, the day Wynn Resorts announced it would temporarily close Wynn Las Vegas and Encore in an effort to help reduce the spread of COVID-19. That day, she was working on some property improvements with the restaurant’s maintenance man of 40 years.

“I looked at him and he looked at me and we saw it coming,” she said.

Sure enough; on March 17, which is Maisondieu-LaForge’s birthday, Nevada Gov. Steve Sisolak announced the closure of all nonessential businesses as of noon March 18.

“I thought it would be two weeks — at most a month” before the city came back to life, she said.

What she wasn’t counting on was that the casinos, the lifeblood of Pamplemousse, would remain closed until at least early June, many of them later. And that conventions, which made up about a third of the restaurant’s business, would cancel one by one until that segment of the economy had all but disappeared.

“It’s been a very long, hard road and I finally, along with a core group of people in my life, have come to the conclusion that I need to move on and take a different path,” she said. “It’s sad and I feel badly about it. Georges had an excellent reputation. Some of the people have been here 30, 40 years.”

Georges LaForge was born in Algeria when his father was stationed there in the French military and grew up in Antibes on the French Riviera. He had been working at the Lido in Paris and came to Las Vegas with some of the dancers in 1962 — “when there were about 100,000 people,” Maisondieu-LaForge said. “Everybody mingled, whether you were a busboy, a business owner or a performer.”

In the earliest days, LaForge was indeed a busboy; since he spoke no English, it was one of the few jobs he could do. But he learned quickly and moved up almost as fast, becoming a chef and showroom captain. At the Desert Inn, he met headliner Bobby Darin, who was a Francophile eager to sharpen his skills.

Darin told LaForge he thought the word “pamplemousse,” which means grapefruit, was the most beautiful in the French language. He urged LaForge to open a restaurant of that name in Beverly Hills.

“Georges said, ‘Las Vegas has given me everything,’ ” Maisondieu-LaForge said. “He was dating showgirls, having a grand time.”

By the time of Darin’s death in 1973 following heart surgery at age 37, LaForge had a casual creperie, “The Morning After.” He changed it into a fine-dining restaurant in 1976.

“He called it Pamplemousse in (Darin’s) tribute,” Maisondieu-LaForge said.

The restaurant, which attracted a parade of stars drawn to LaForge’s dashing good looks and charming personality, became legendary for fine French cuisine such as cold foie gras with tawny Port and aspic, escargots Bourguignonne, duck with black currant or armagnac-peppercorn sauce and rack of lamb in pistachio crust. But it had two specialties that were absolutely iconic: the between-courses entremet of grapefruit sorbet, and the elaborate basket filled with crudite that was served before dinner.

And when Maisondieu-LaForge thinks of them, in light of current conditions, she sees only a disconnect.

“I go out to eat, with no tablecloths, no placemats,” she said. “For what we do, double tablecloths, candlelight, three, five or six — as many as eight — courses, just forget it. It’s a moot point. It’s just an odd time right now with so many aspects of the business. All of the conviviality, all of the graciousness, all of the pomp and circumstance of this kind of place is lost.”

Maisondieu-LaForge also has had to deal with challenges not related to the pandemic. LaForge died of liver cancer on March 24, 2019. The shutdown close to a year later was followed by an August incident in which three men in a stolen car, who were being pursued by law enforcement officers, crashed into Pamplemousse.

“They drove straight into the restaurant and got stuck,” she said. “We’ve been boarded up since then” because of a months-long battle with her insurance company.

And the increasingly violent atmosphere since the Strip has reopened hasn’t helped.

“It did add to the general distaste for wanting to continue in this situation,” she said. “I’ve found the climate to be unpalatable for what we wanted to do. It’s just not the right time anymore.”

Regrets? She has a few.

“It saddens me more than anything,” she said. “For a long time I was really angry about it, but now I just feel sad. I feel badly I can’t have jobs for the people who have stayed with Pamplemousse all of their lives. It was a great run of 44 years. I did my best.”

But then again, too few to mention.