Safety on the Las Vegas Strip 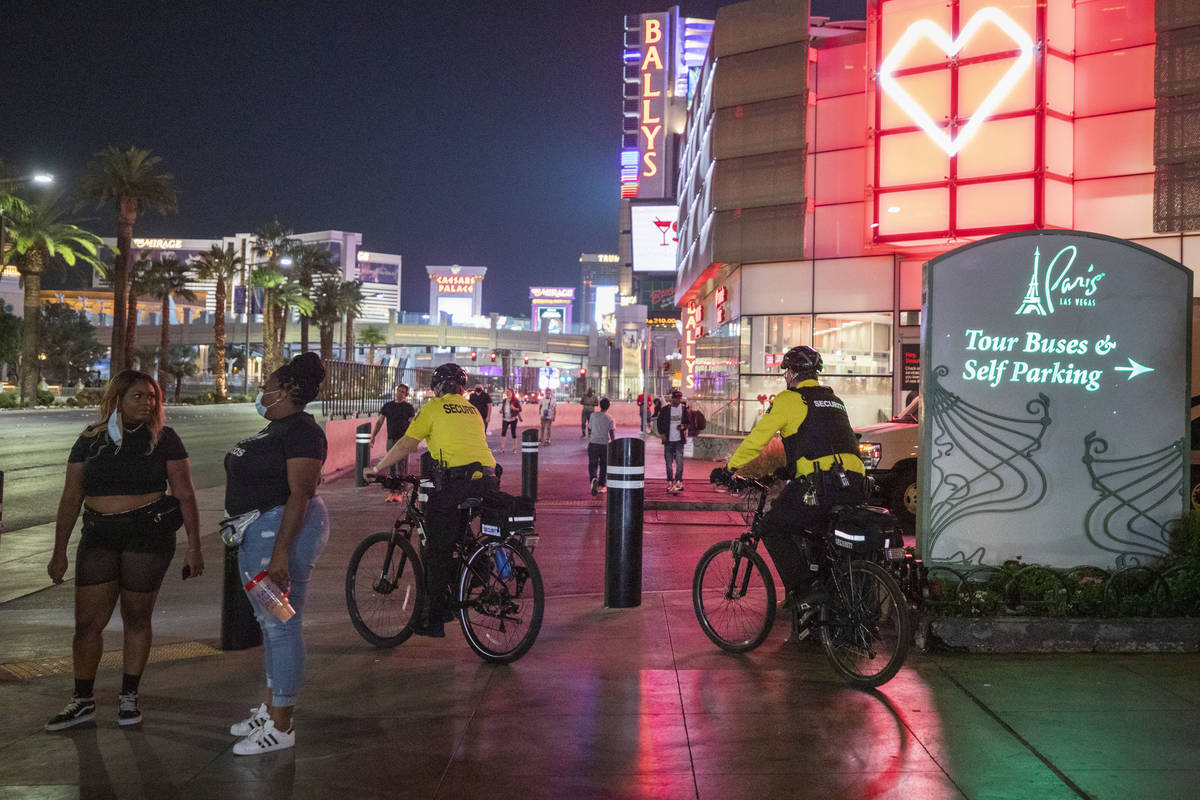 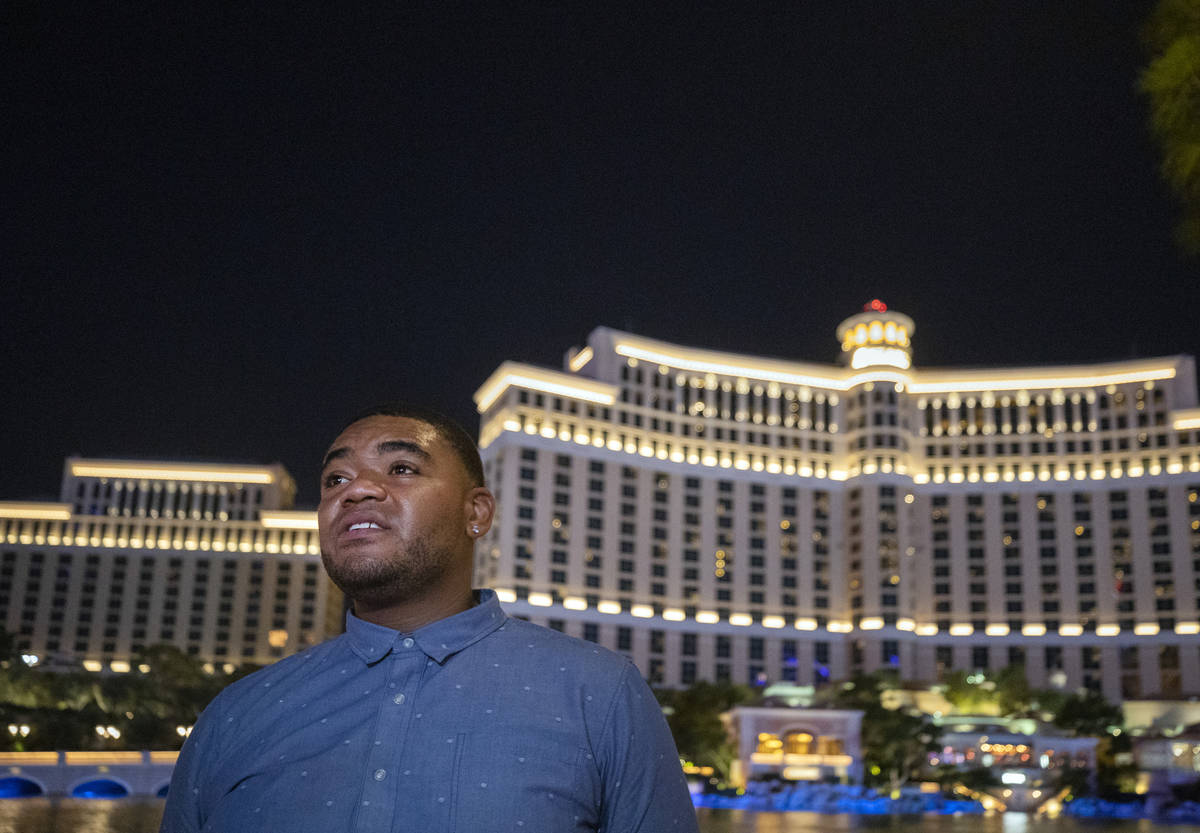 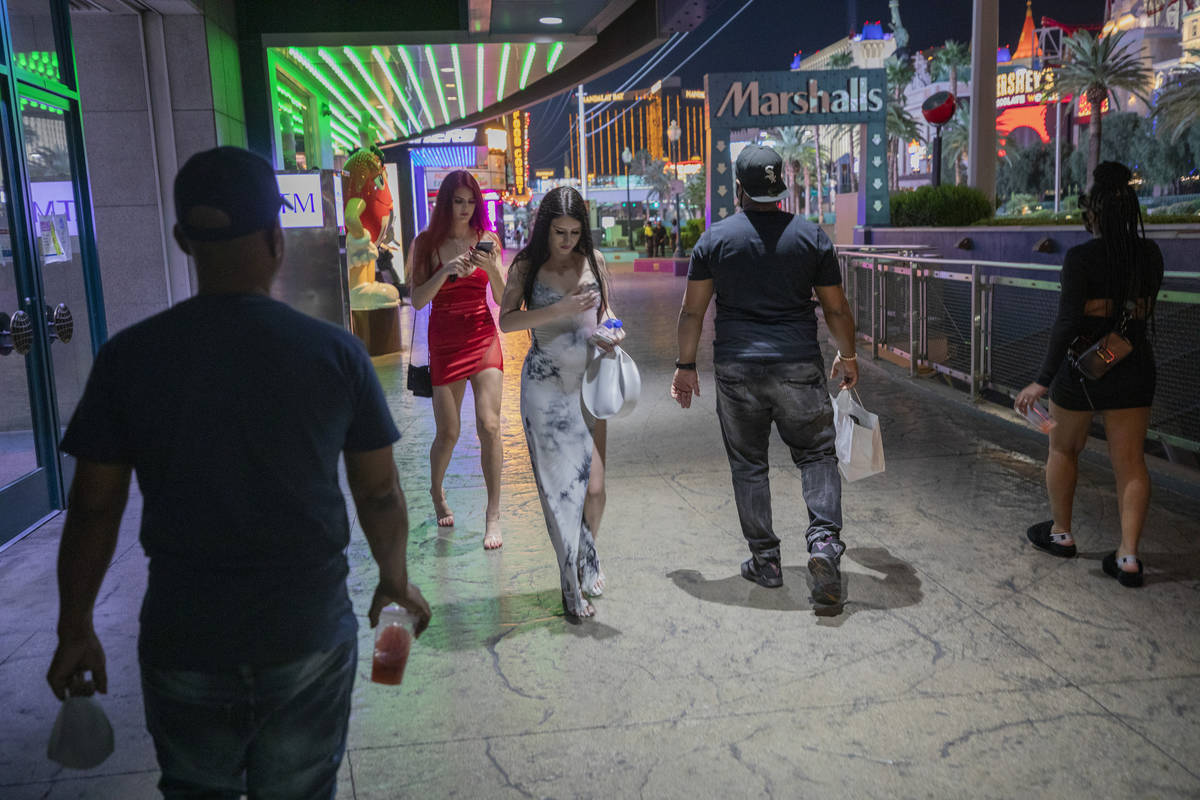 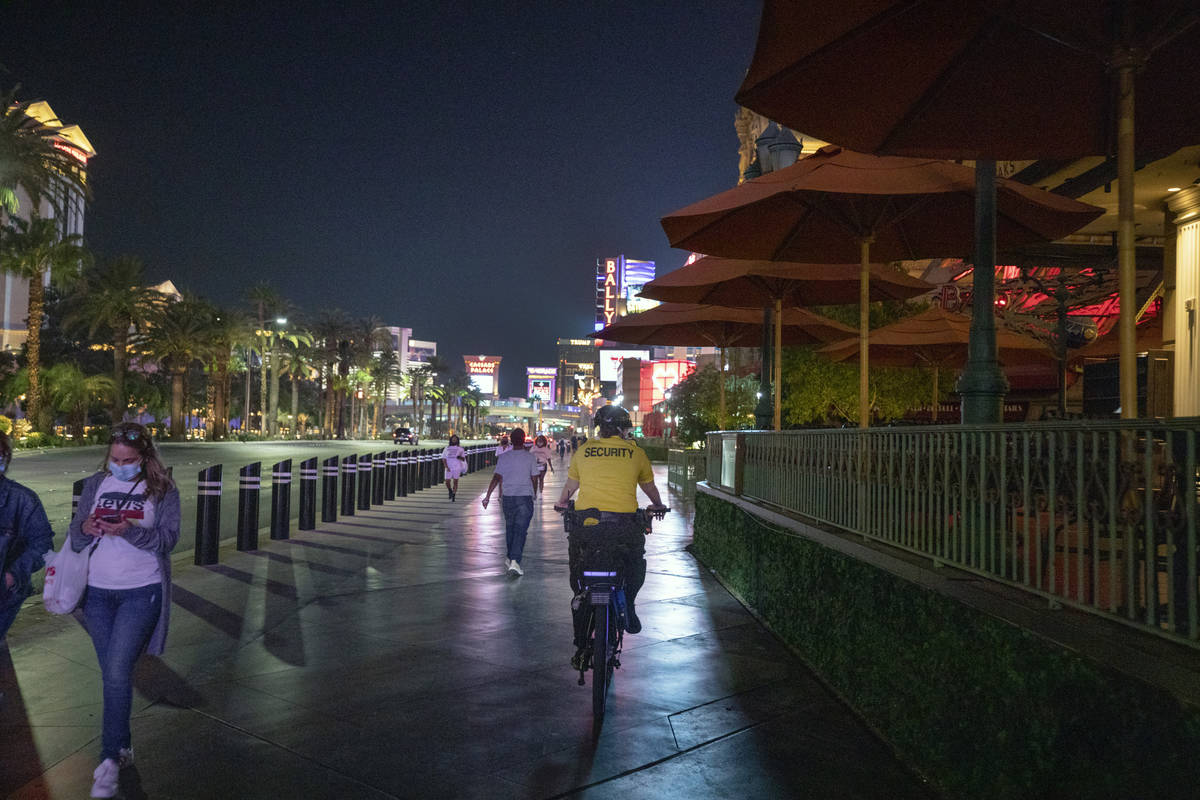 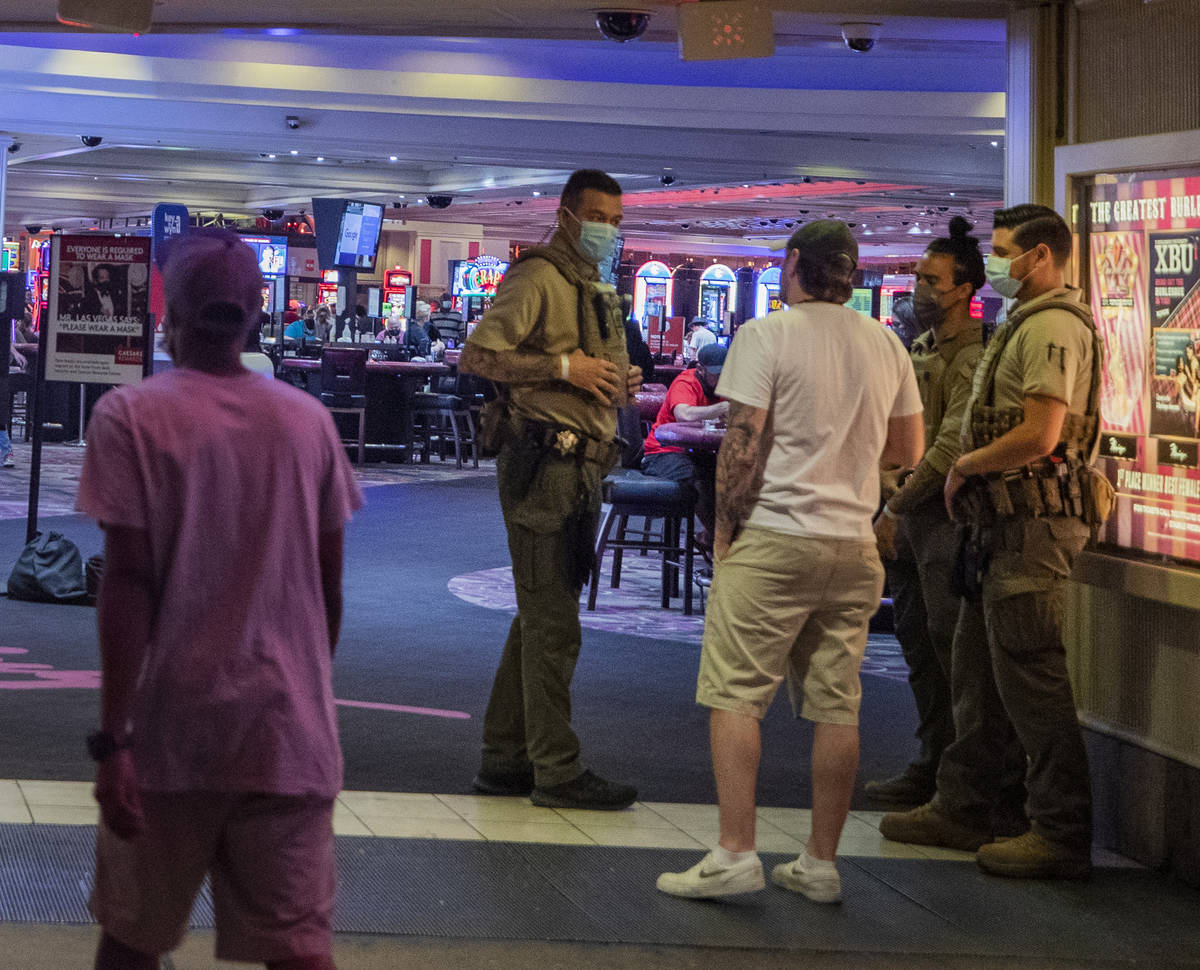 Security guards are seen at an entrance of the LINQ Hotel and Casino, on the Las Vegas Strip early Thursday, Oct. 8, 2020. (Elizabeth Brumley/Las Vegas Review-Journal) 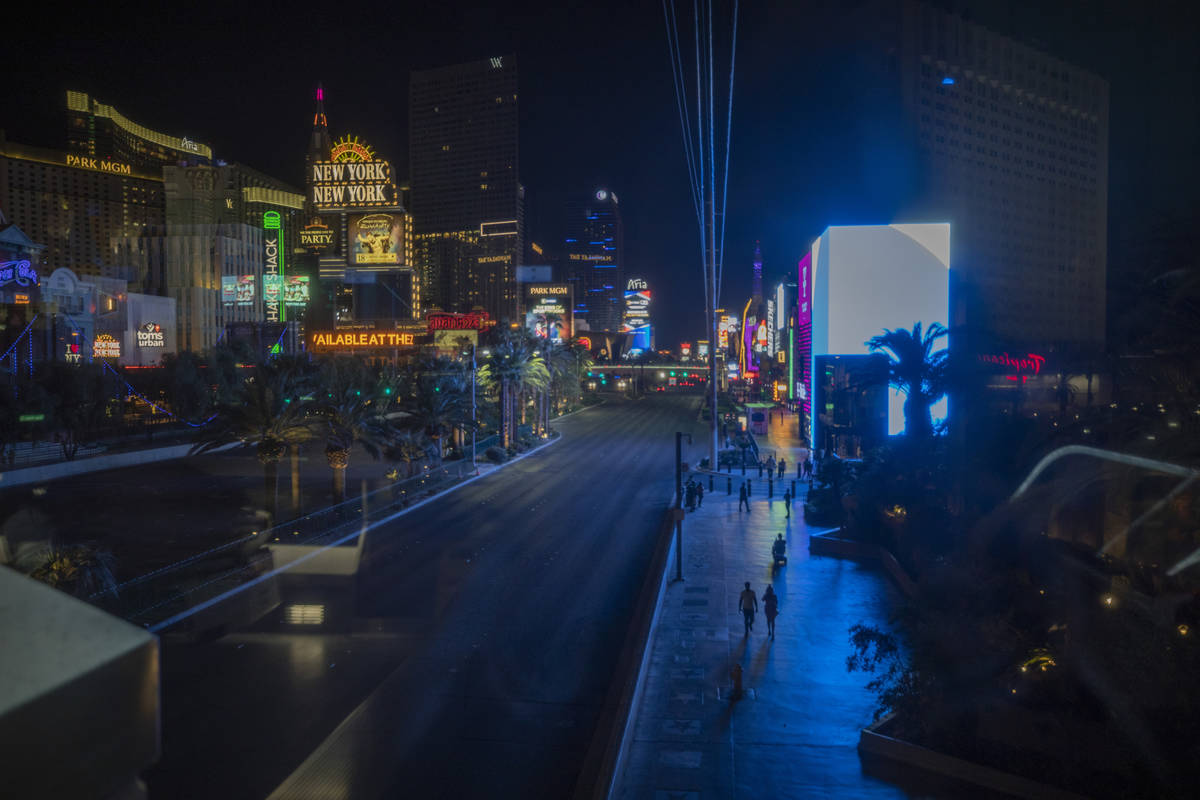 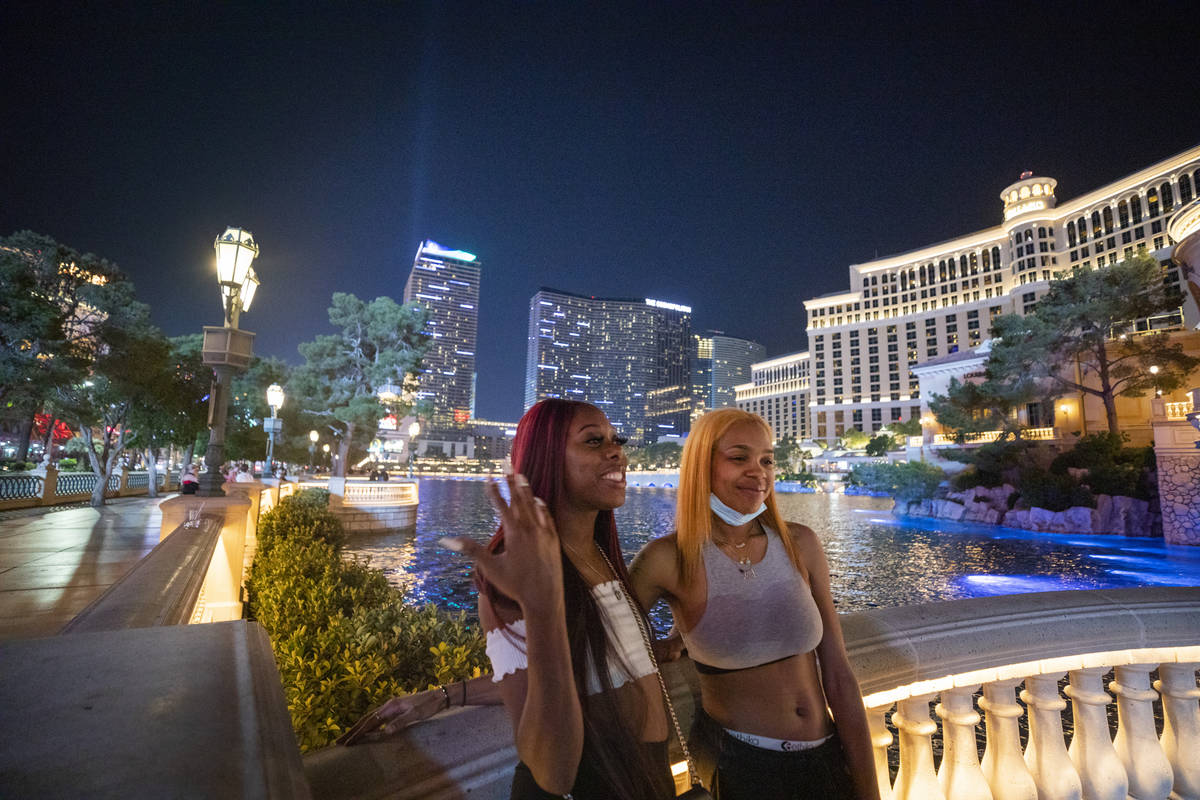 Shamika Nick of Detroit, left, and Janae Jackson of Las Vegas, discuss their knowledge of recent violence on the Strip, near the Bellagio hotel and casino fountains, late Friday night on Oct. 7, 2020. (Elizabeth Brumley/Las Vegas Review-Journal) 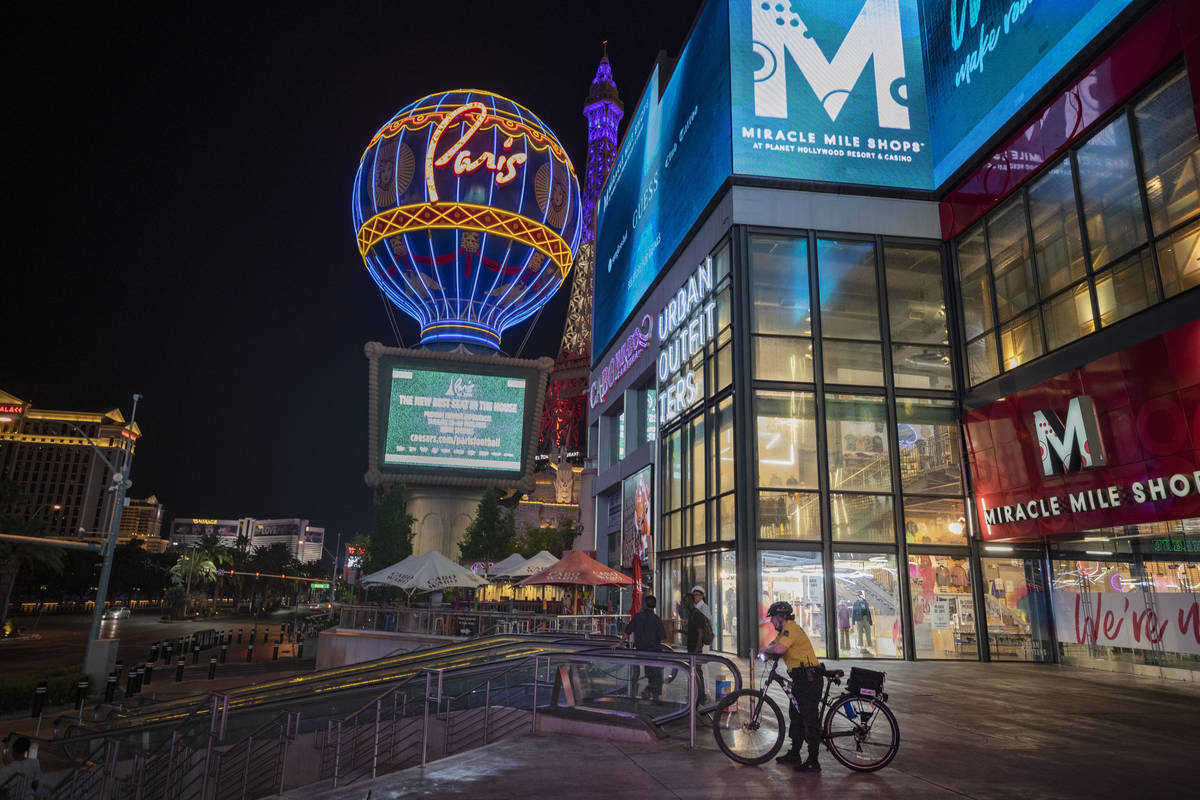 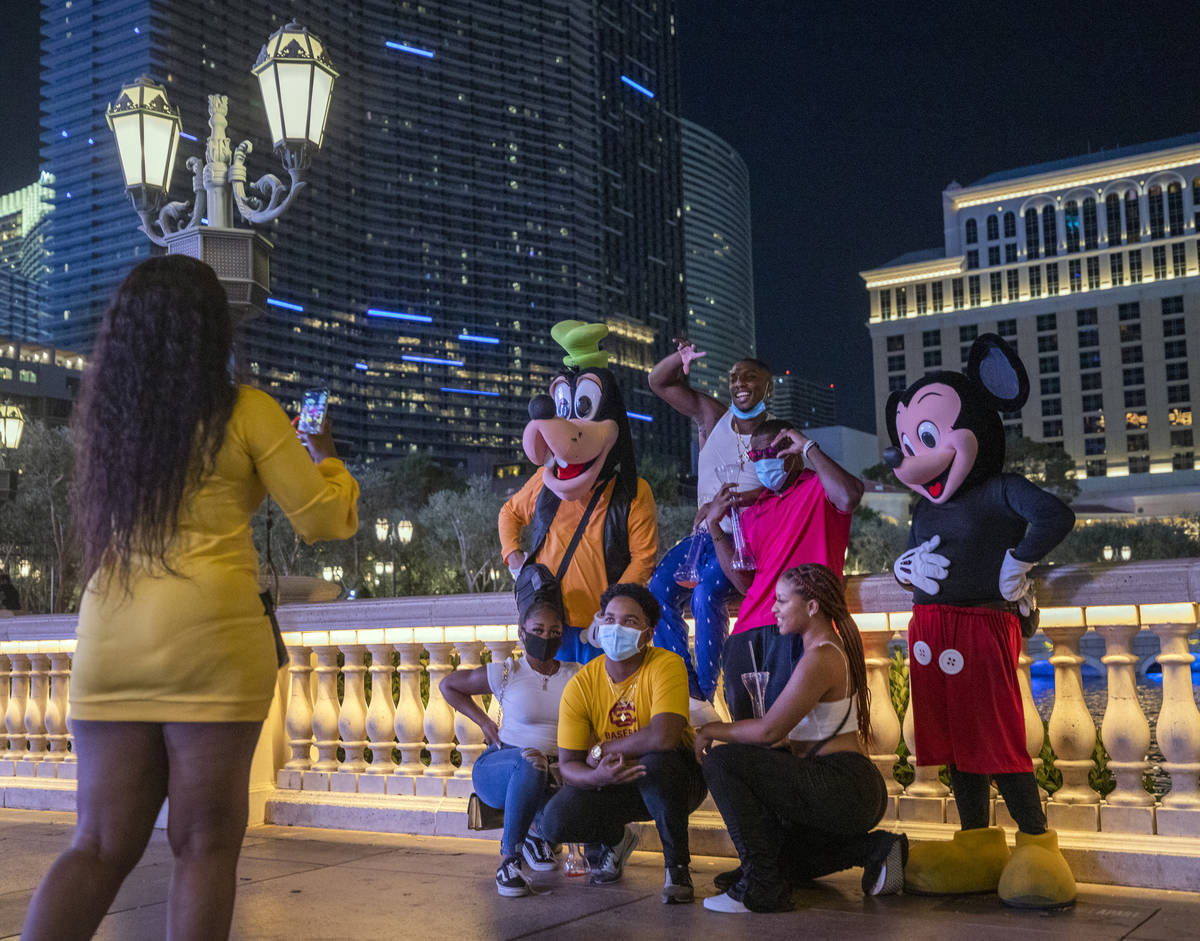 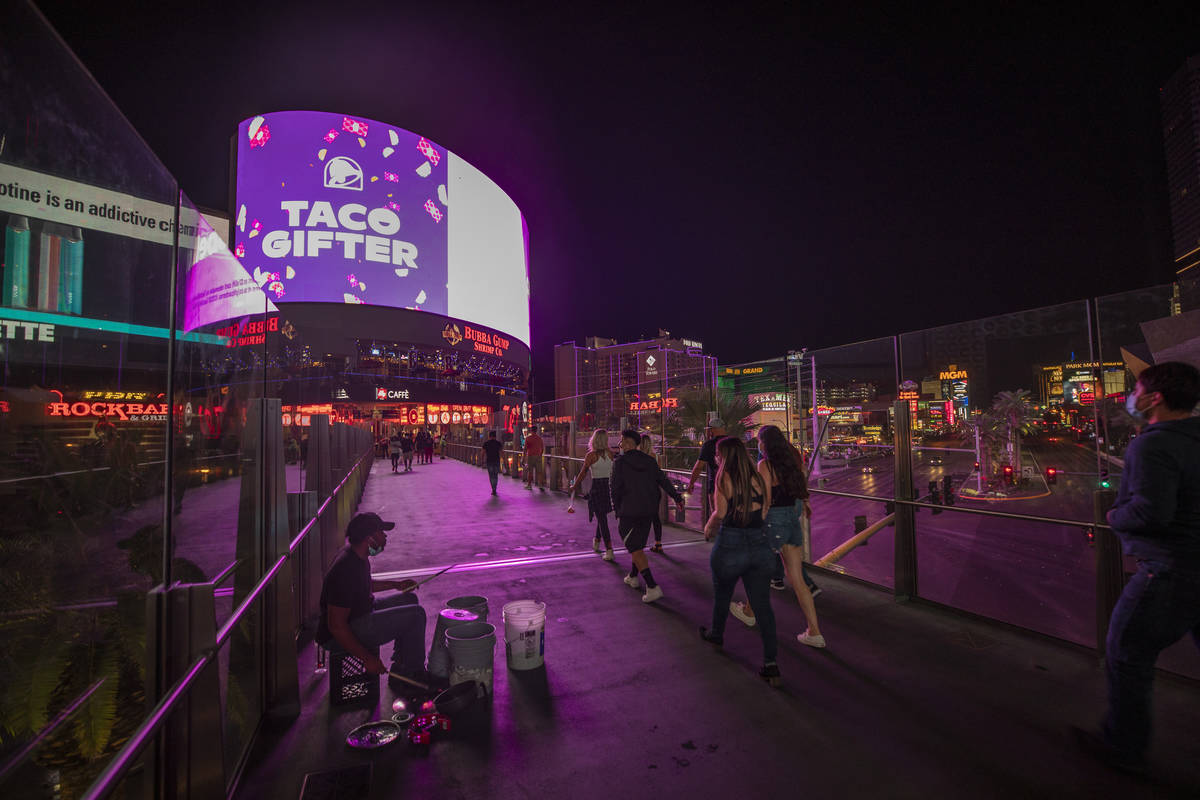 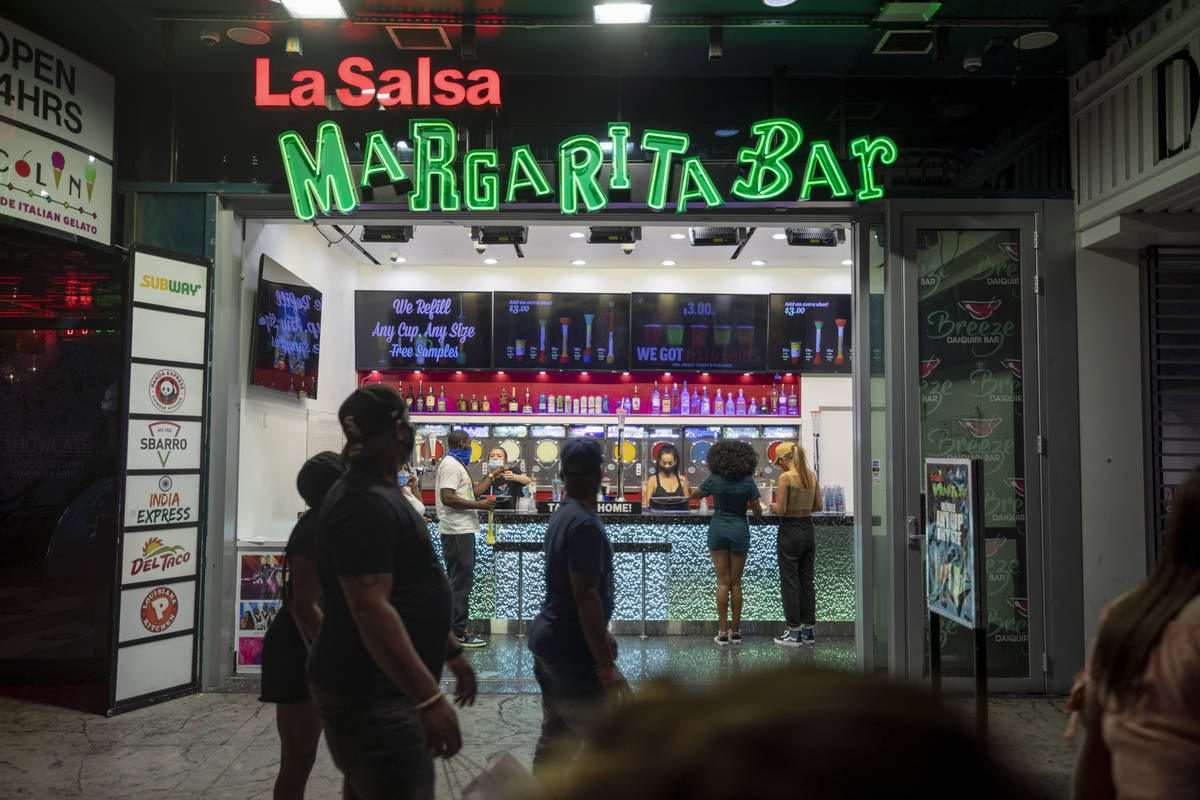 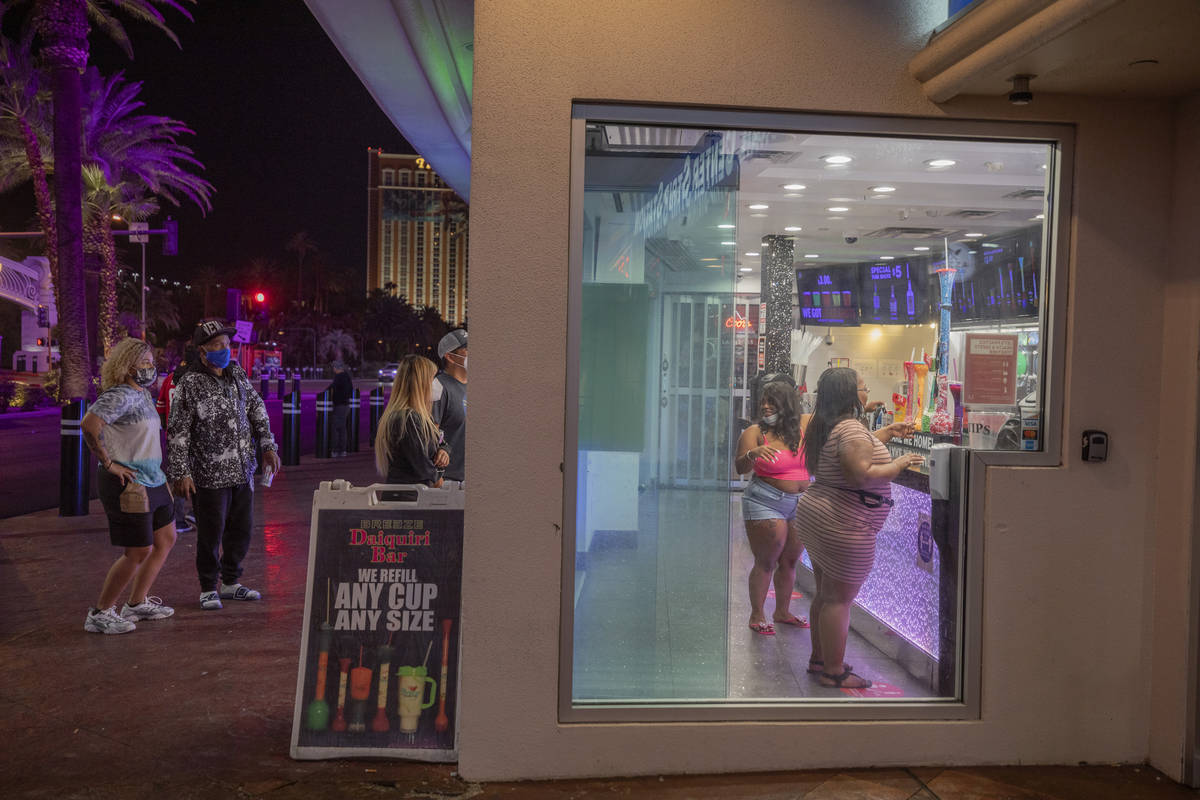 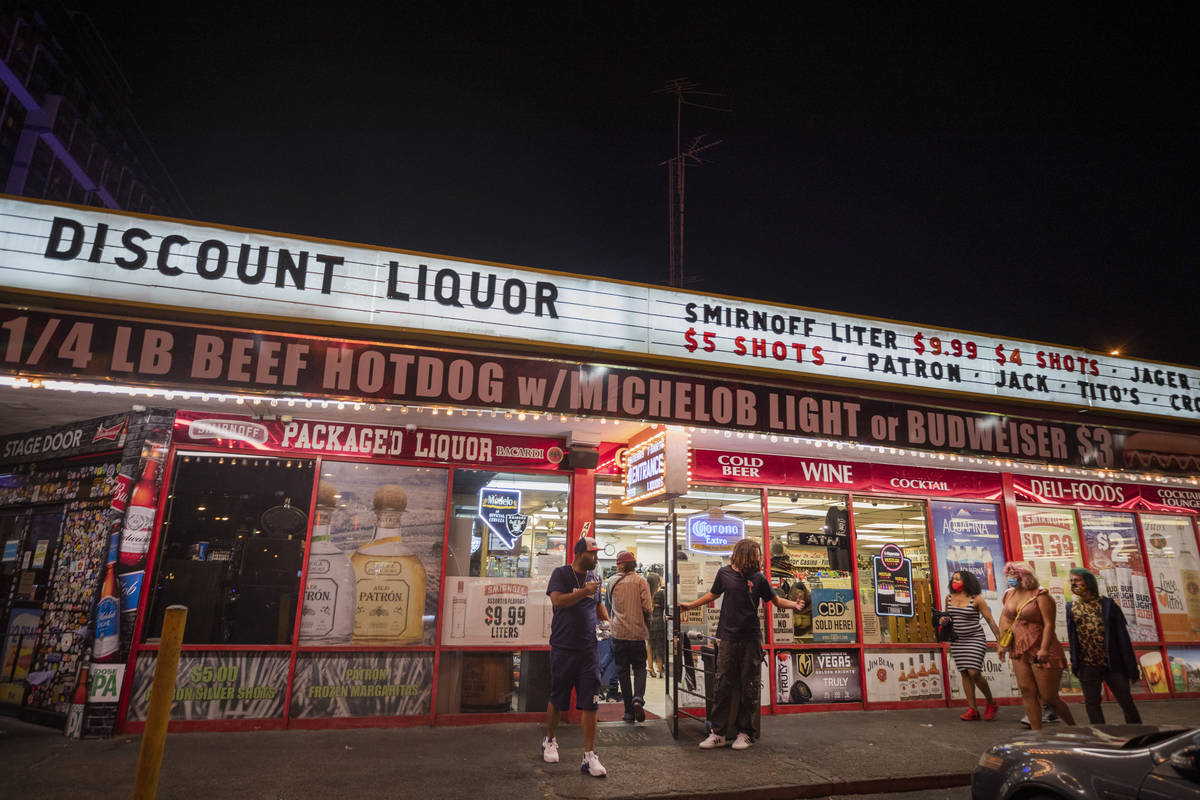 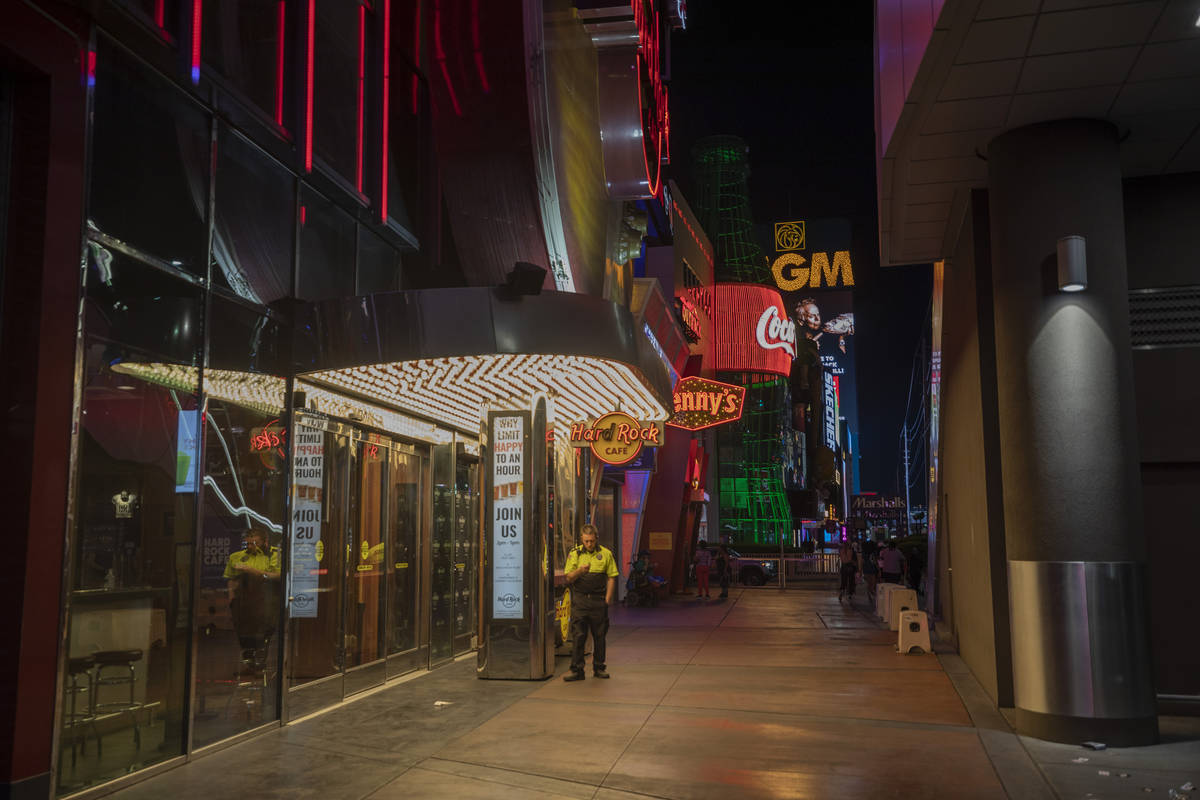 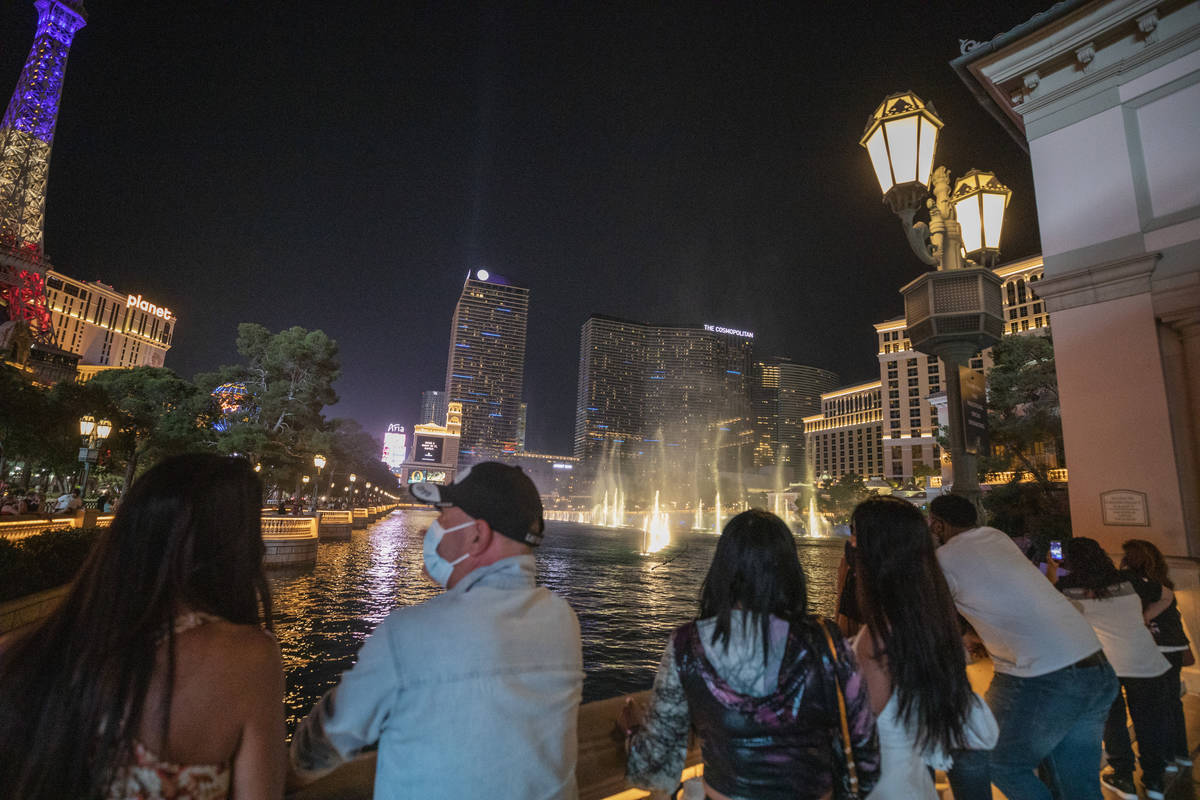 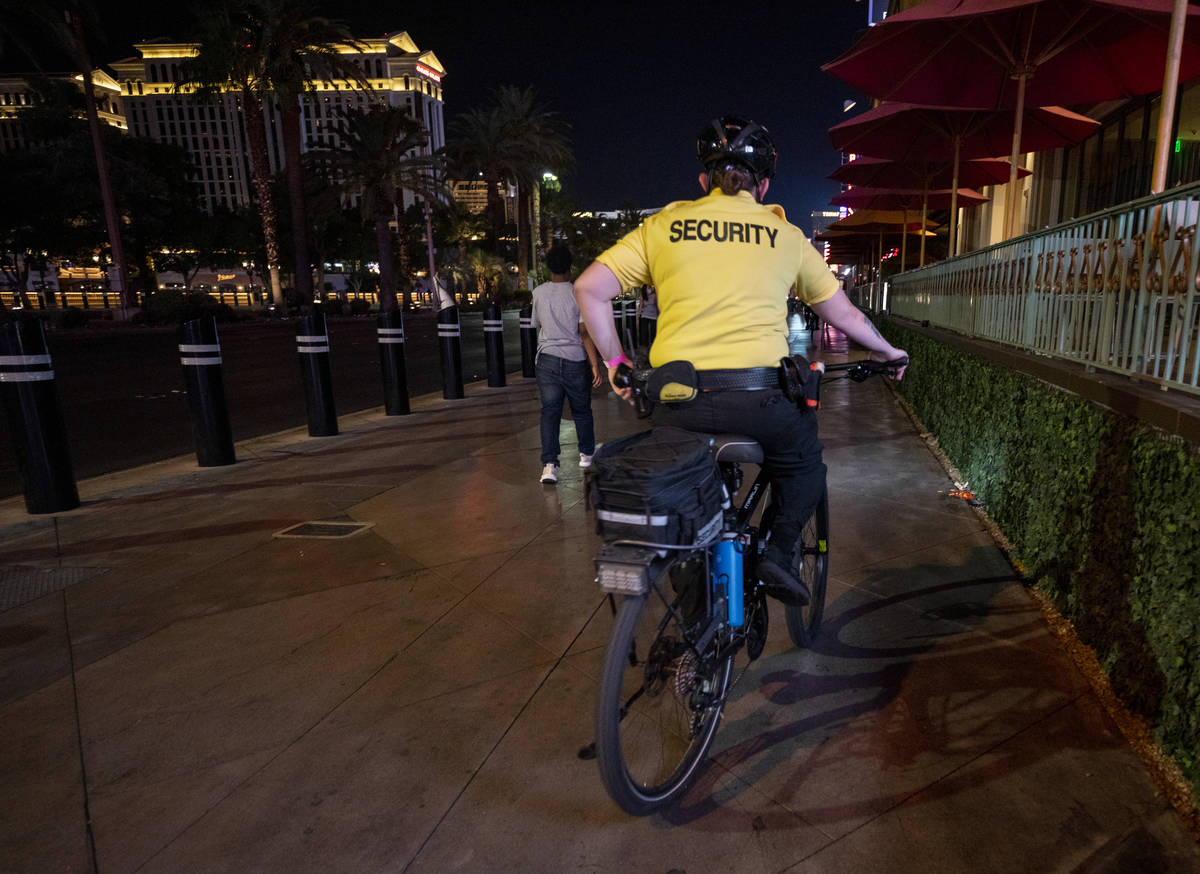 Tourist Freddie McKinney came to the Las Vegas Strip from North Carolina on Oct. 2 to enjoy the same experiences as most tourists: seeing the lights and luxurious hotels, spending time in the casinos and enjoying the nightlife on the Strip.

After arriving, the Greensboro resident learned of a string of shootings and fights on Las Vegas Boulevard South.

Still, despite the recent rash of violence, he said he feels safe.

“I know Las Vegas has had a couple of issues recently, but I haven’t come across anything that would be alarming,” McKinney said in front of the Bellagio fountains Wednesday, shortly before midnight. “I will say there are a lot more security guards that patrol the Strip now since I’ve been here before. I haven’t come into any encounters where it was an issue.”

This perception from tourists that the Strip is safe is a critical component of a strong economic rebound for a city reeling from the fallout of COVID-19.

A prominent gaming analyst said that if the city is going to recover from “one of the most challenging times in Las Vegas history” brought on by COVID-19, Southern Nevada has to stamp out violence along Las Vegas Boulevard South. Doing so will remove obstacles from the goal of refilling hotel rooms and casinos while preventing further damage to the local economy.

“If you are hoping for a Vegas recovery, that is going to be significantly harder with increased crime, whether it is reality or just increased perception,” said Barry Jonas, a senior gaming analyst at Truist Securities.

Metropolitan police said this week that they are making progress. They’ve added patrols, enhanced partnerships with Strip gaming properties and implemented a pair of enforcement operations aimed at pulling guns off people on the boulevard.

“All of us recognize that the Strip, downtown, our tourist corridor is the economic engine of our state,” Metro Capt. Dori Koren told the Clark County Commission this past week. “It is a top priority.”

A focus on guns

The violence on Las Vegas Boulevard South includes gunfire in the valet area of the Aria, a gunshot fired on the casino floor of the MGM Grand, the Sept. 27 critical wounding of a person in the 3500 block of the Strip, the shooting of a man multiple times in front of the Paris Las Vegas, and the fatal shooting of a man by Las Vegas police.

Three people were also shot in front of a bar and liquor store on Flamingo Road just a short distance from the Strip. A fight at the Encore nightclub at the Wynn prompted a lawsuit against the yet-to-be identified combatants.

And this weekend, a man was injured in a shooting at the Miracle Mile Shops while another person was taken to the hospital after being attacked by a group of people on the Strip, according to Las Vegas police.

In some of these crimes, viral videos documenting the mayhem circulated on social media to significant viewership.

The violence drew the attention of the commission this week. Koren, who oversees the convention center area command, which includes the Strip, told commissioners that police are aggressively tackling the problem while pointing to the need for perspective.

Police said they implemented operation Operation Top Gun, seizing 64 guns from people on the Strip in 30 days. Police are now employing a measure called Persistent Pressure, a technique of increased patrols with the help of security from gaming properties.

“It is trending in the right direction,” Koren said of the convention center crime statistics.

He also said Metro has noted that “a good portion of our crime in the tourist corridor involves out-of-state visitors.”

The gaming industry said this week that it is fully engaged with police as airfares and hotel rates have dropped amid the dip in tourism stemming from COVID-19.

Wynn Las Vegas said it is increasing security. This will include additional screenings and security personnel during nighttime hours. In those time frames, guests entering Wynn Las Vegas and Encore will be scanned for metal, and their hand-carried bags will be screened.

Las Vegas Convention and Visitors Authority President Steve Hill said that “2020 has been anything but normal” for the tourism business. He said the pandemic has caused a temporary rise in crime throughout the country. The response by Metro and the authority’s resort partners are working together “to quickly make adjustments that discourage criminal behavior.”

Recent security protocols implemented at casinos and an increased police presence are reducing crime, he said.

“We have not seen an impact to visitation, nor have our resort partners,” Hill said. “We’re all fiercely protective of our destination and committed to ensuring that Las Vegas continues to be a destination where visitors can come, enjoy all we have to offer and feel safe.”

The Cosmopolitan announced Friday that the hotel will implement bag checks and use metal detection wands every Friday and Saturday for the foreseeable future. Security will limit entrance to hotel guests, rewards card holders and people with dinner reservations, according to the resort’s statement.

“We work very closely with Metro as they work diligently to reduce crime both on the Strip and off,” Ahern said. “We don’t believe that recent high-profile incidents are reflective of Las Vegas and the safety of our properties on the Strip.”

That also appears to be the sentiment of tourists interviewed on the Strip on Wednesday night. The Review-Journal spoke with more than a dozen visitors. None had heard about the violence before arriving in Las Vegas until they watched the local news. All the people interviewed said they felt safe and had observed an increased law enforcement presence on the Strip.

Detroit resident Shamika Nick and her close friend Janae Jackson, of Las Vegas, were not worried.

“I do feel safe on the Strip considering coming from where we come from, Detroit,” Jackson said, adding that she is “so used to a lot of stuff now.”

Liz Pulido, of Merced, California, comes to the Strip every year or so as a tourist. She said she was more concerned about COVID-19 precautions than violence.

“Everyone is taking their precautions, doing what they need to do, wearing the masks,” Pulido said. “I feel pretty safe out here for the most part. I feel safer here than I would in San Francisco to be honest.”