Hundreds of motorists circled the Henderson Pavilion five times — once for each member of the Henderson City Council — and some honked their car horns Saturday during a “car parade protest.”

Participants were voicing opposition to a city proposal to build a 6,000-seat minor league hockey arena. The Henderson Coalition for Responsible Government, a citizens group, organized the event, which started in the upper parking lot at the Henderson Pavilion on South Green Valley Parkway.

Coalition spokesman John Dalrymple said Saturday that an estimated 500 people attended, but he noted that he didn’t have an official count.

Signs were taped to some cars, with messages such as “No arena here” and “Show us the NDAs” (referring to nondisclosure agreements). And some expressed concern over home property values or called out Golden Knights owner Bill Foley.

The proposed arena — which would house an American Hockey League affiliate of the Knights — would replace the Henderson Pavilion.

“We understand that the pavilion has fallen into disrepair,” said Dalrymple, a longtime resident of the Green Valley Ranch area. But he said the arena would destroy the quality of life for the surrounding residential areas.

He said organizers of Saturday’s protest hope it will spur the city and the Knights to withdraw support for the project.

An arena doesn’t belong at the site of the Henderson Pavilion, Dalrymple said, noting the area is the beginning of Green Valley Ranch. There are about 6,400 homes and more than 12,000 residents within a one-mile radius of the site, he said.

He said another option could be turning the pavilion site into a park and building the arena near the Galleria at Sunset mall or in west Henderson, calling it a “win-win for the community.”

On Thursday, the city released results of a survey showing 70 percent of the approximately 400 residents surveyed said they think a hockey arena would be good for Henderson.

But Dalrymple said residents have been “bulldozed and ignored” by the city. He said the coalition has tried to reach out to the city — including writing letters and making phone calls — and attended community meetings about the project, but officials aren’t listening. “They’re absolutely deadset on putting an arena here.”

“We’re just trying to listen and learn,” he said.

Herr said the city has hired consultants to look into one of the key concerns residents are raising: traffic. He said it will be discussed during a virtual community meeting Wednesday.

The city says bypassing a requirement to have the City Council approve contracts worth more than $100,000 will help officials quickly respond to the pandemic. 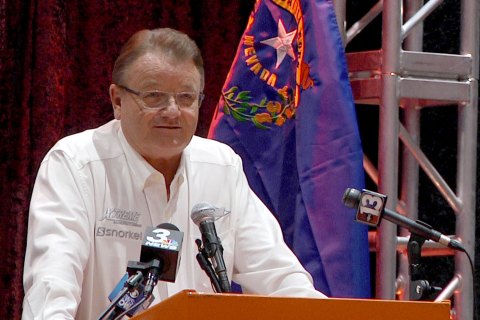