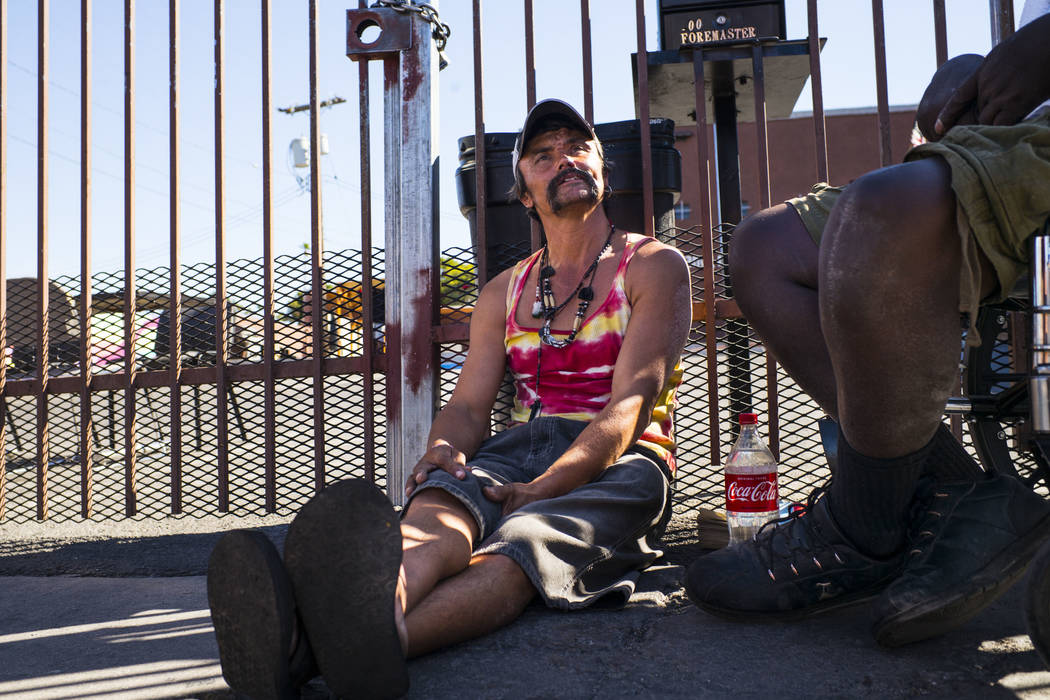 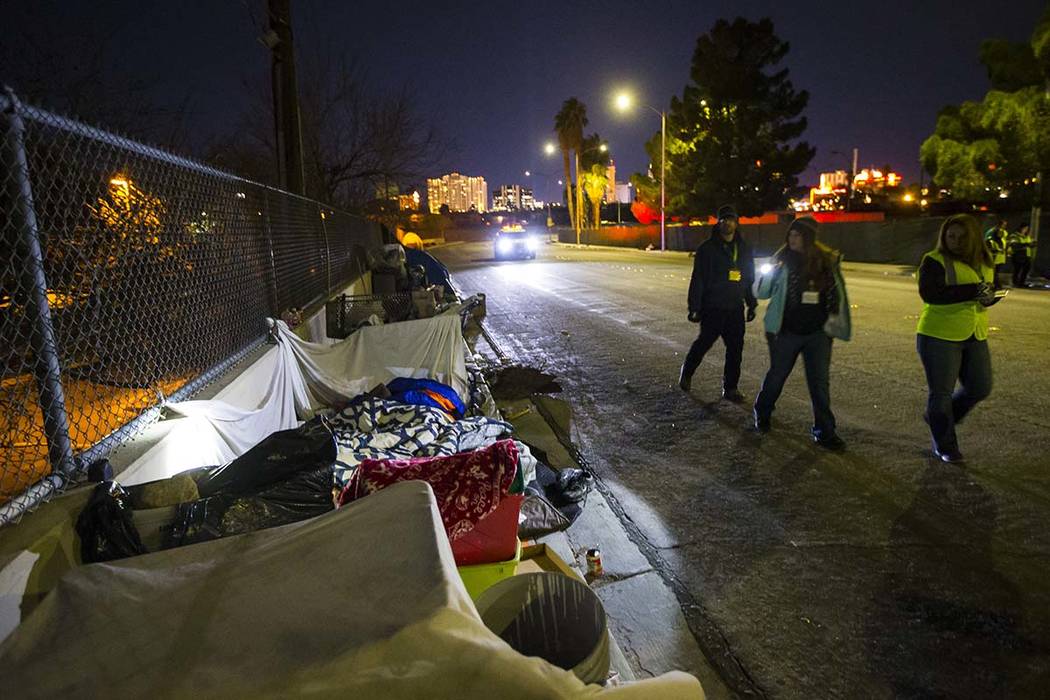 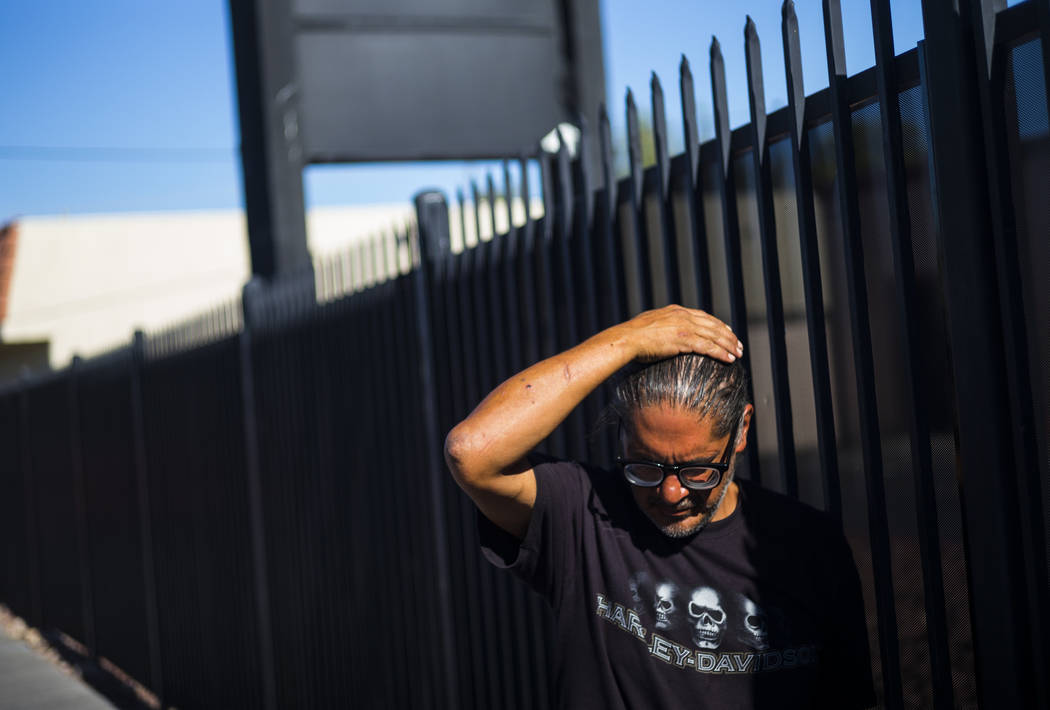 The method for Clark County’s annual count of the homeless in January will be dramatically different from previous tallies.

The change was approved Thursday by the Board on the Continuum of Care program to end homelessness, a regional group mandated by the U.S. Department of Housing and Urban Development, that consists of the county, its cities and service providers.

For each of the past 12 years, hundreds of volunteers have fanned out to count the sheltered and unsheltered on one night. The following day they counted homeless youth and those living in the storm drainage tunnels. The data was later logged, and follow-up surveys were conducted weeks later to gather information on certain subpopulations of homeless people.

For the 2020 Southern Nevada Homeless Census, people will now instead be counted over three days, only at daytime. And the surveys will be issued at the same time volunteers are conducting the count.

Even though the point-in-time count is just a “snapshot” of homelessness in the region, Danita Osborne-Morris, public administrator for Clark County Social Services, said the new method should be more accurate.

“If we take the opportunity to make the switch this year, we can really find out how we can better make these efforts more efficient and more accurate for what we are trying to accomplish,” she said.

This year’s census counted 5,530 in shelters and on the streets on any given night in Southern Nevada, a drop of 9 percent. The number drew skepticism from homeless service providers and the homeless themselves, many of whom said the problem appeared to be getting worse, not better.

From Jan. 28-30, census teams will count the sheltered homeless on one day, tally the unsheltered and homeless youths another day and check for homeless living in rural and any other areas not canvassed the final day. Air patrols will help with the final search.

The count and data from surveys will be immediately uploaded via an app that can geographically map where homeless individuals are congregated, allowing officials to make precise determinations about which jurisdiction they are in. If wireless service is not available, volunteers can work offline and sync it to the master database once they regain connectivity.

As a result, officials expect to be able to get the overall census reports months earlier than in previous years.

This is the first major change since the methodology was established in 2007.

The homeless census, mandated by HUD, is crucial for the county to receive some federal aid to address homelessness. This year, the county received nearly $15 million from the federal government for services in the community.

The county is required to conduct the census every other year, but it is conducted yearly.

Board can fine tune method in 2021

The Board on the Continuum of Care program said it was adopting the new method in 2020 because it’s an “off year” on HUD’s calendar. That will enable the board to make improvements before the next official HUD census in 2021.

Osborne-Morris said that in a webinar in June, HUD strongly recommended the use of mobile apps, which other communities have already adopted. The data from the apps can develop “heat maps” that show the density of encampments in a given area.

Each year, the percentage of survey participants during the count have declined, Osborne-Morris said. Last year, only about 6 percent of those counted responded.

This year, for example, the census counted 5,530 individuals, but only 352 people responded to the trend surveys.

“That’s not exactly a representative sample, so that could be skewing our results, skewing the data we’re providing and essentially hurting the funding we’re able to receive,” she said.

Next year, volunteers will offer clean socks as an incentive to answer the questionnaire in an effort to reach a goal of a 60 percent response rate.

Census teams, which include case managers, agency staff members, volunteers, adult or youth peer navigators and law enforcement officers, will be deployed for four-hour shifts for the counts.