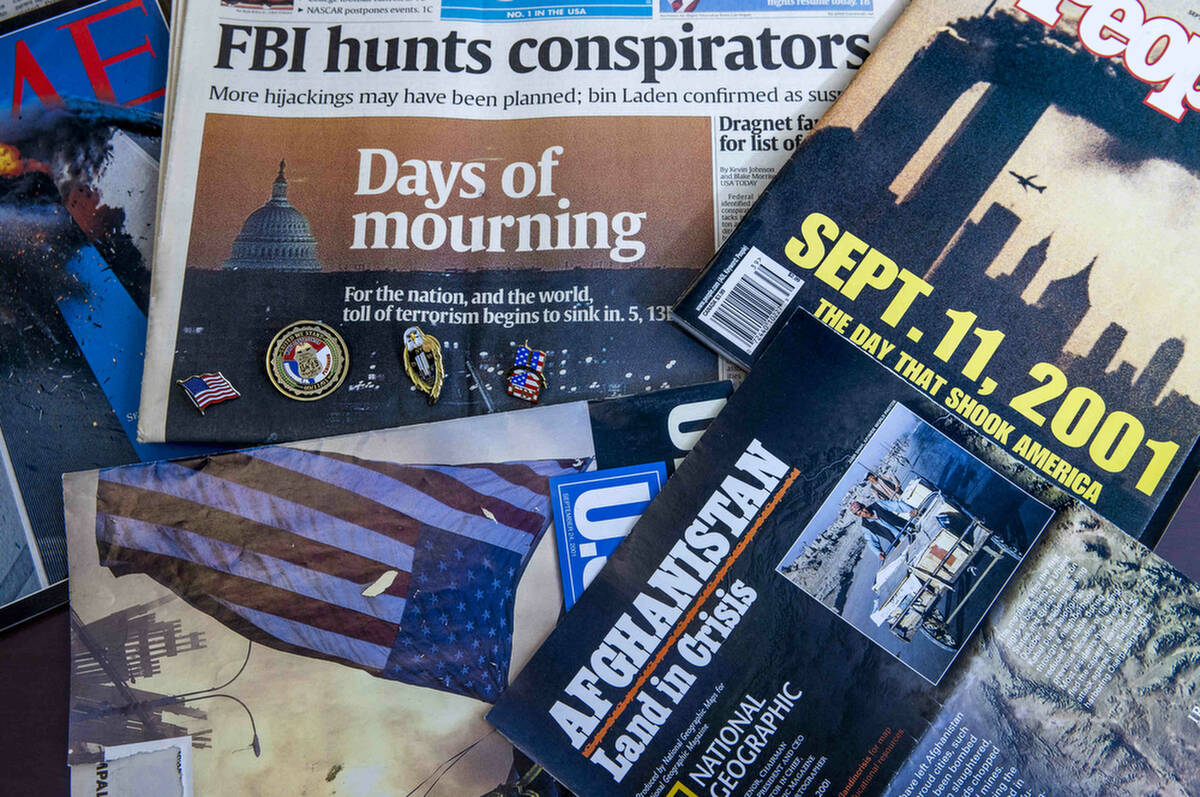 Today marks the passage of 20 years since the terrorist attacks on Sept. 11, 2001, the day that changed our nation — and our state.

Nearly 3,000 people were killed on that day, making it the deadliest foreign attack on American soil. Roughly 40 percent of them remain unidentified.

Following are some of the ways that 9/11 had an immediate and lasting impact on our state.

— Within hours of the attacks, one of the largest, most intense investigations in the history of the Las Vegas FBI division would unfold at a stunning speed. Four of the 19 hijackers had traveled to Las Vegas between May and August 2001. But why? The investigation concluded with no concrete answer, though two prevailing theories have emerged in investigative reports. One suggests that the al-Qaida terrorists came to Las Vegas to scout potential targets. The other assumes they were in Las Vegas planning the attacks. Grant Ashley, the special agent in charge at the time, believes it to be the latter.

— The nation’s airspace was emptied for the first time in history, instantly grounding about 70 local flights. More than 10,000 people had to be cleared from McCarran International Airport that morning and sent back to their hotels. McCarran stayed closed and nearly empty until the morning of Sept. 13., when it reopened to even longer ticketing lines The first flight, bound for Hawaii, departed around noon.

— The instant travel interruption gave way to a sharp decline in tourism. In the two weeks following the attacks, as many as 15,000 employees were laid off from Las Vegas casinos. Several Strip properties shelved their expansion plans for months, and in some cases, even years. By spring 2002, some properties started to hire again, though the fiscal year would end with about 6,000 fewer casino jobs on the Strip.

— Visitors and locals alike, eager to donate blood, arrived at blood banks in such numbers that a cargo plane from the Nevada National Guard was dispatched to Puerto Rico to pick up more blood bags from a manufacturer.

— Car rental agencies and the downtown Las Vegas bus station were mobbed by visitors stranded by the airport’s closure. Local car dealerships even reported an uptick in business, as some desperate travelers decided the only way out was to buy a car, drive it home and sell it.

— By about 9 a.m. local time, the order was given to close U.S. Highway 93 and clear all vehicles and visitors from the top of Hoover Dam for the first time since World War II. The highway reopened three days later, but long-haul tractor-trailers were never allowed to cross the dam again.

— Palo Verde High School teacher Barbara Edwards, 58, was the only full-time Las Vegas resident killed on the day of the attacks. Edwards was aboard American Airlines Flight 77, which slammed into the Pentagon in Washington, D.C. Twenty years later, the high school still hosts a ceremony in her honor each year to mark the anniversary of the attacks. Her son Scott said at this year’s ceremony: “I think she would be blown away and grateful, but I also think she would say, ‘Oh, you guys don’t have to do this for me.’”

— Ron and Nancy May’s loss is a permanent part of the country’s historical record. Their daughter, Renee, a flight attendant on American Airlines Flight 77, is one of two people known to have placed phone calls from the aircraft before it crashed. She called her parents in Las Vegas at 6:12 a.m. local time to tell them her flight had been hijacked. Accounts of that final call are published in the 9/11 Commission Report.

— Ahead of the 20th anniversary, nearly 15,700 post-9/11 veterans were enrolled in the state’s two largest Veterans Affairs systems. Fifty-seven service members who listed Nevada as their home state have died in the war on terror, according to a national database.

— As the real New York still smoldered, a spontaneous memorial sprang to life in front of the fake version of the city on the Las Vegas Strip. The memorial outside New York-New York would swell to include more than 6,000 items, most of them T-shirts from police and fire departments across the country. For help, hotel officials turned to UNLV to collect and catalog every item. Today, the items are preserved in 491 boxes at the university’s library.