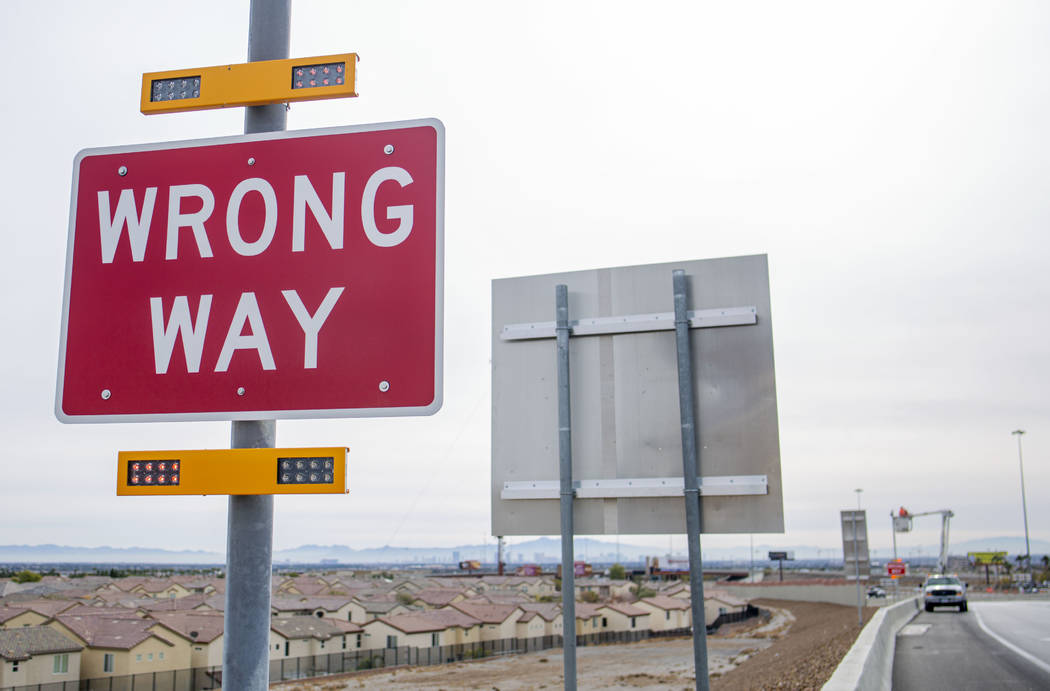 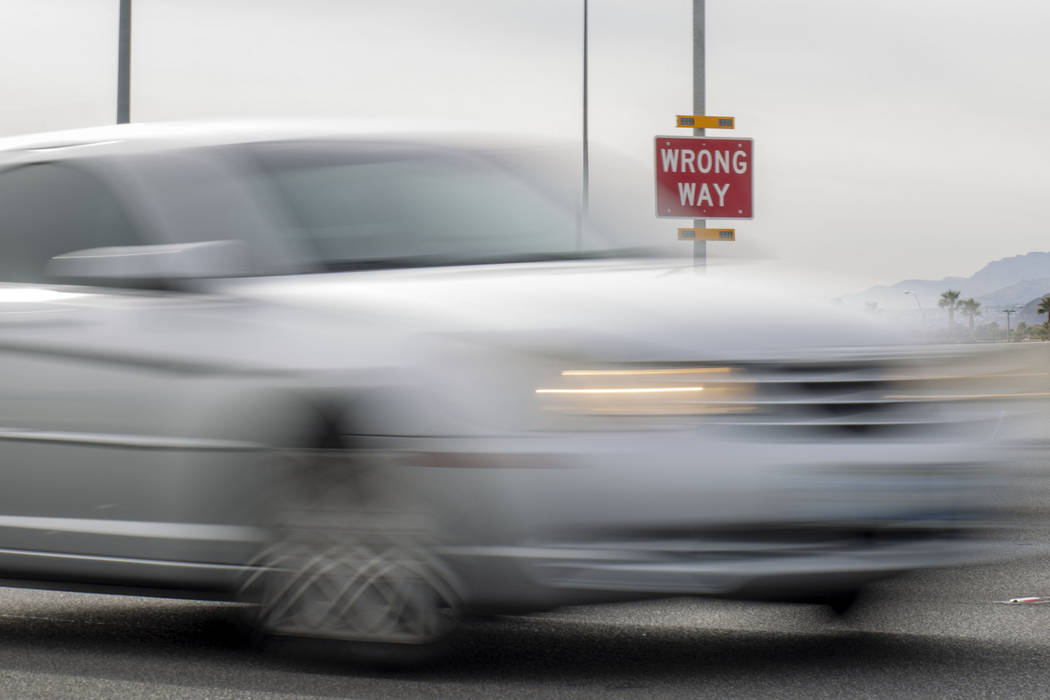 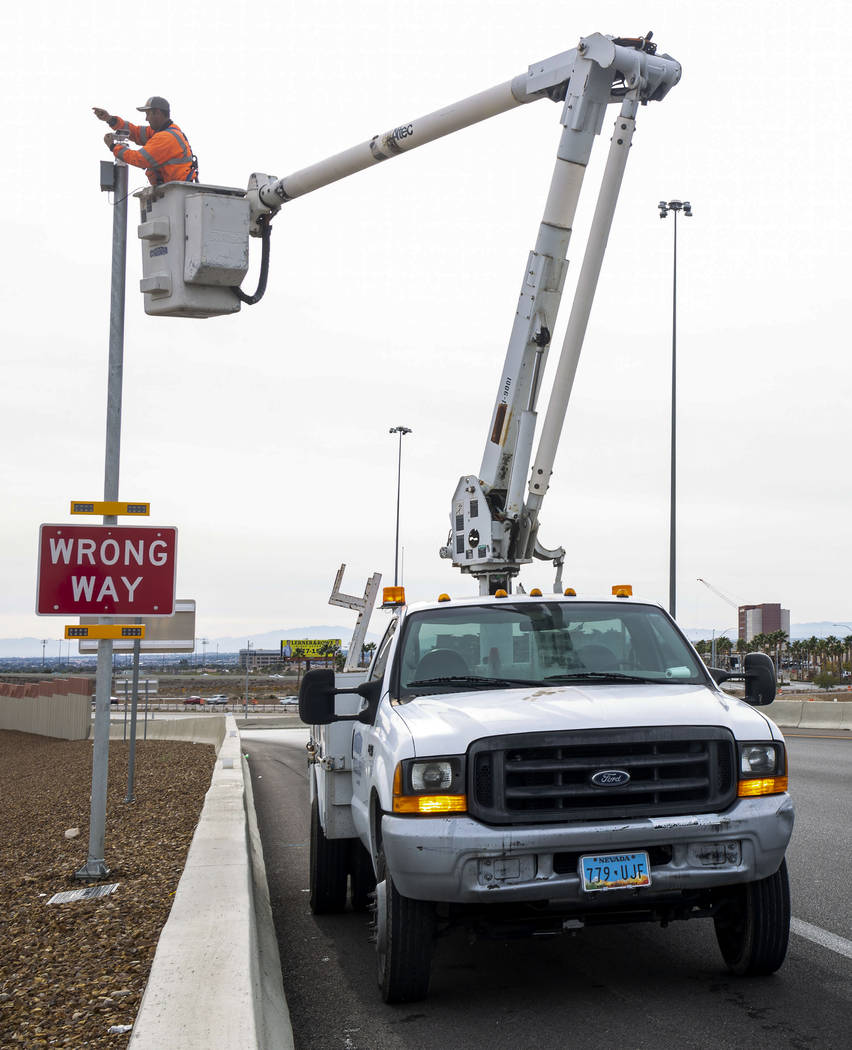 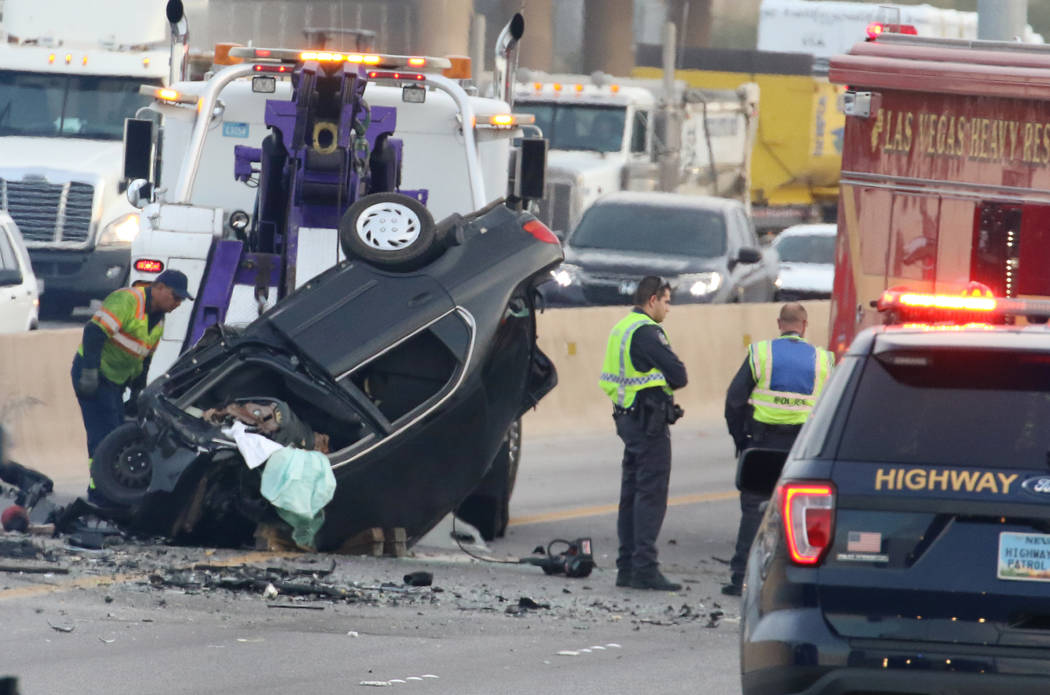 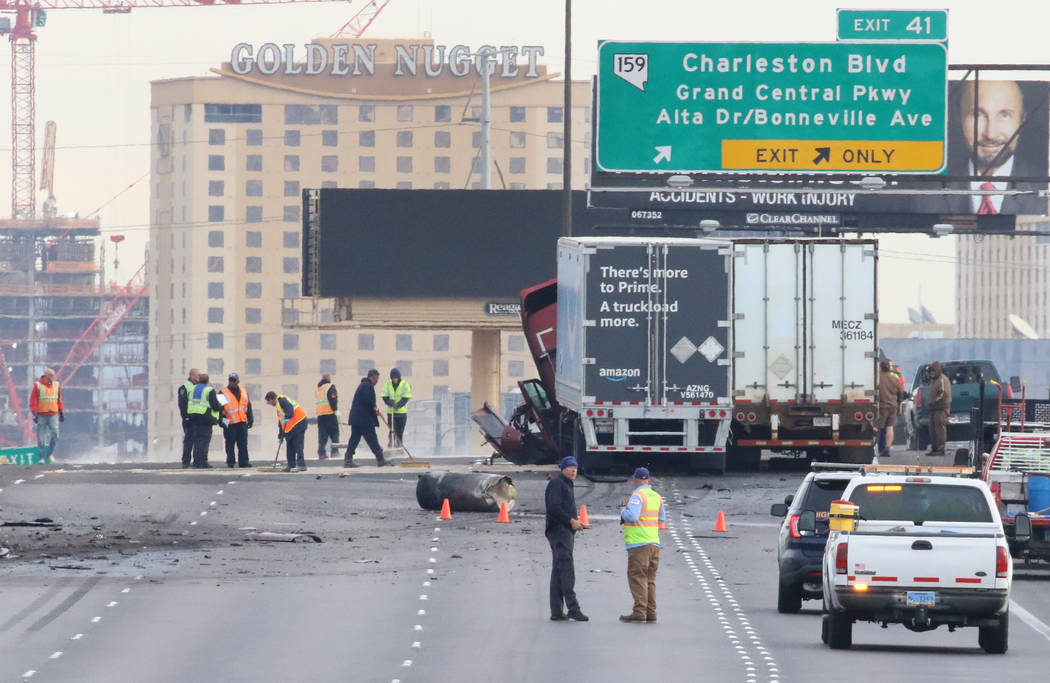 Workers clean-up debris after a fatal car crash where a wrong-way driver was killed on northbound Interstate 15 near Sahara Avenue on Tuesday, Dec. 3, 2019, in Las Vegas. All northbound lanes of I-15 are closed and are expected to remain closed for several more hours. (Bizuayehu Tesfaye/Las Vegas Review-Journal) @bizutesfaye

The Nevada Department of Transportation is implementing a pilot program to deter wrong-way drivers, whose crashes are far more likely to result in death or serious injury than other types of highway collisions.

Transportation Department spokesman Tony Illia said a pilot system is being installed at the U.S. Highway 95 off-ramp at Durango Drive in the northwest Las Vegas Valley. The system uses a camera and an electronic sensor, which alerts wrong-way drivers on the off-ramp by triggering strobe-like beacons on wrong-way signs.

“The flashing lights will go off, and hopefully the driver will self-correct,” Illia said. “The system will be tied in to the Southern Nevada traffic command center so that first responders can be dispatched immediately.”

The system is expected to be ready in early 2020, he said.

Solutions can’t come soon enough for Nevadans. At 3:30 a.m. Tuesday, a wrong-way driver was killed on Interstate 15 at Charleston Boulevard, snarling traffic for much of the day. It was the third wrong-way crash on Las Vegas Valley roads in three weeks.

“Unfortunately we have a lot of wrong-way crashes here in Las Vegas, especially in the overnight hours,” Nevada Highway Patrol trooper Travis Smaka said. “One is too many, but we have had a rash of them.”

The National Transportation Safety Board in 2012 released a report that detailed just how deadly wrong-way driving crashes are on highways.

The report called wrong-way driving “one of the most serious types of highway accidents” because, while they account for about 3 percent of crashes, they are much more likely to result in death.

— About 60 percent of wrong-way drivers in crashes were impaired by alcohol.

— About 360 people in the U.S. die each year in about 260 wrong-way collisions. Nine percent of wrong-way drivers had been convicted of driving under the influence within three years prior to the collision.

— Besides alcohol, an impairment issue associated with wrong-way driving involves motorists with medical conditions. “Although age is not a determinate of driving performance, aging is associated with both an increase in medical issues and the use of prescription medications to treat those conditions,” the report said.

A string of deadly wrong-way crashes in Arizona in recent years prompted the state to take action.

The Arizona Republic reported that, through July, Arizona had 16 wrong-way driver fatalities, the same number as all of 2018. One of this year’s crashes killed five people in May, including 82-year-old Harold Wickham and 90-year-old Ella Wickham, both from Laughlin. Authorities said Harold Wickham was driving east in the westbound lanes of Interstate 40, causing a crash near Kingman that also killed three people from New York.

The Associated Press reported that Arizona lawmakers last year made it a felony to drive the wrong way while impaired by alcohol or drugs. The state also installed a system using thermal cameras positioned at off-ramps in the Phoenix area to alert authorities when a vehicle enters the freeway in the wrong direction.

The installation of cameras and lighted warning signs at U.S. 95 and Durango is the first system of its kind in Southern Nevada.

“We have a couple that we have installed in Northern Nevada,” Illia said.

While there is no guarantee the system will stop a wrong-way driver, Illia said, research by the Texas A&M Transportation Institute showed such systems can reduce head-on collisions by up to 40 percent.

“Like any pilot system, we want to test it, gauge its effectiveness, see how well it works,” he said. “If they do work like they are supposed to, we can definitely be looking to implementing more of these throughout the valley.”

Each system costs roughly $100,000 or less, depending on infrastructure available at an intersection.

“Perhaps the simplest solution are the two-sided paving markings that are already in place along I-15 and U.S. Highway 95,” Illia said. “Motorists driving the right direction will encounter yellow or clear pavement markings. If driving the wrong way, however, the markers are red. We have also installed several large red wrong way signs throughout the valley.”