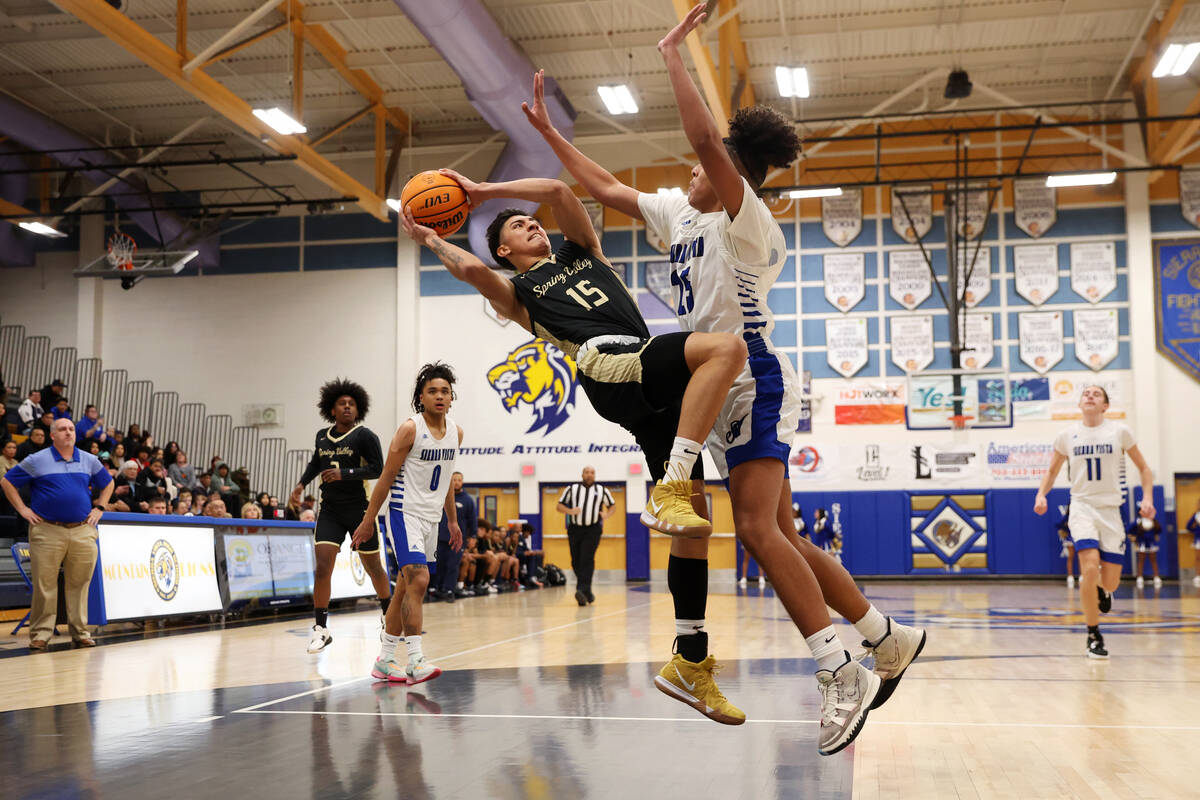 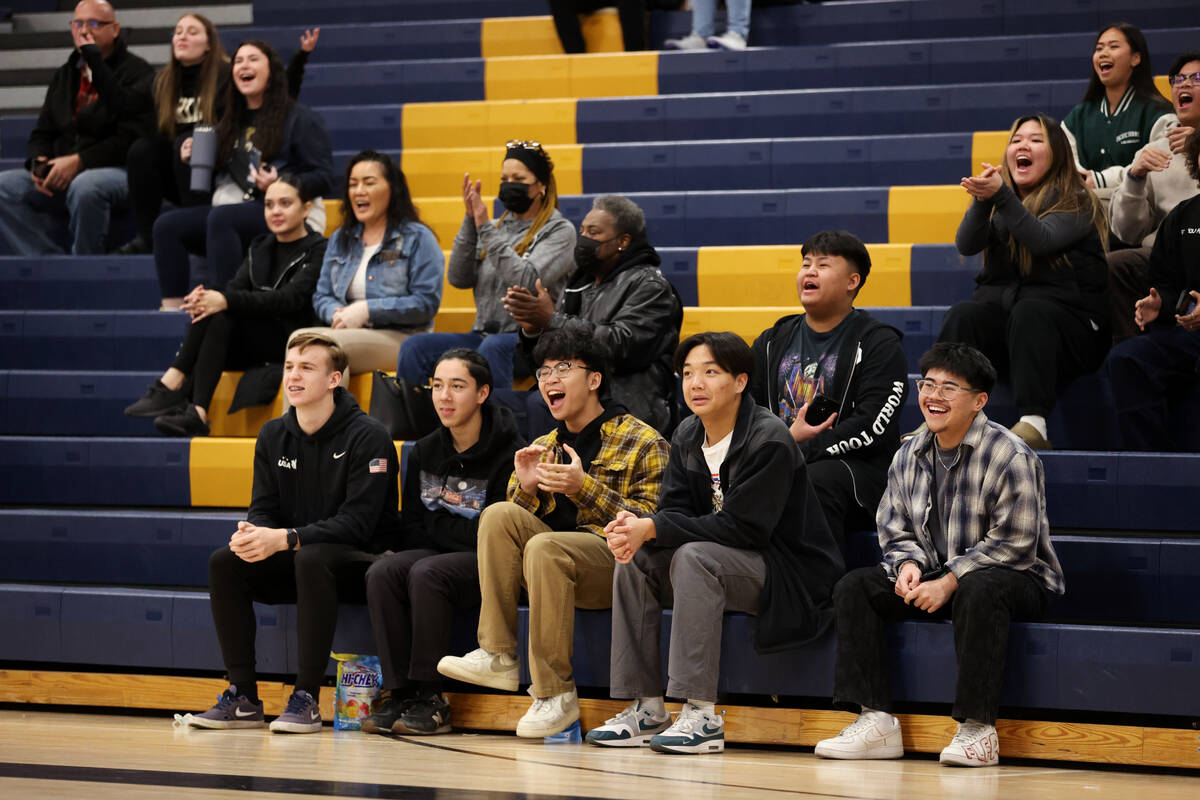 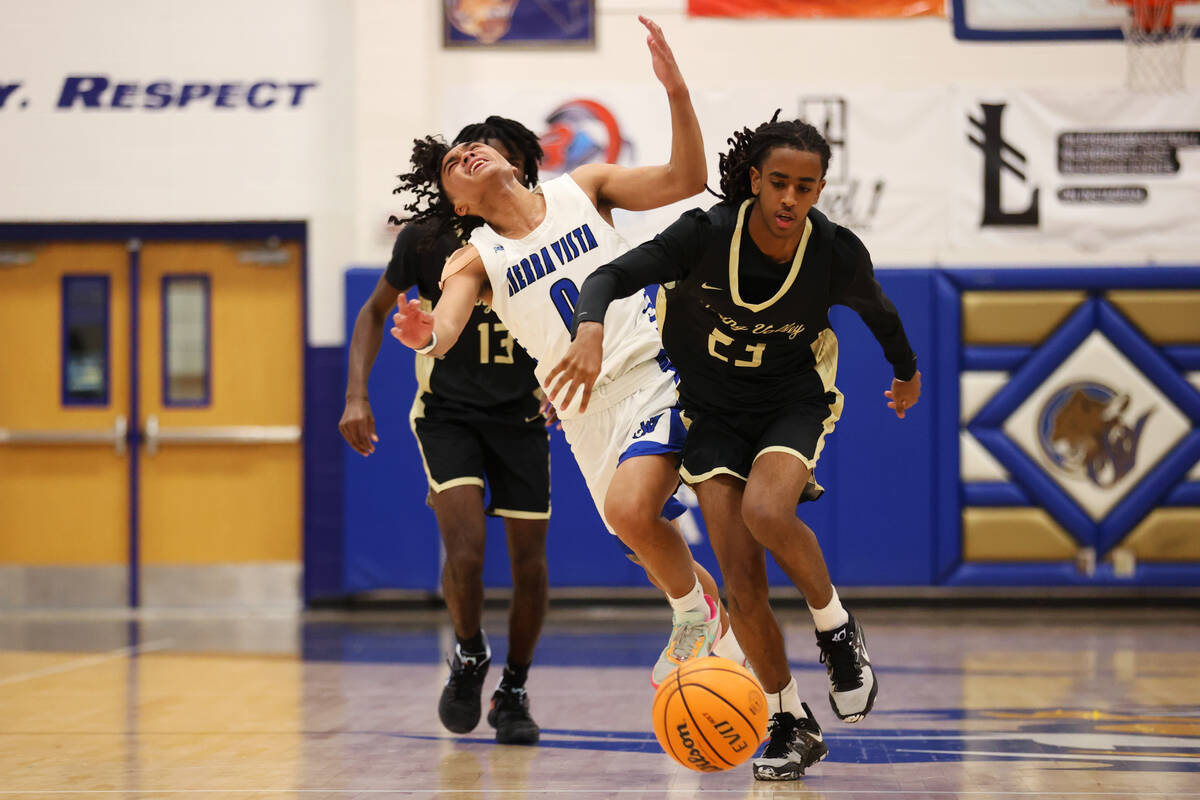 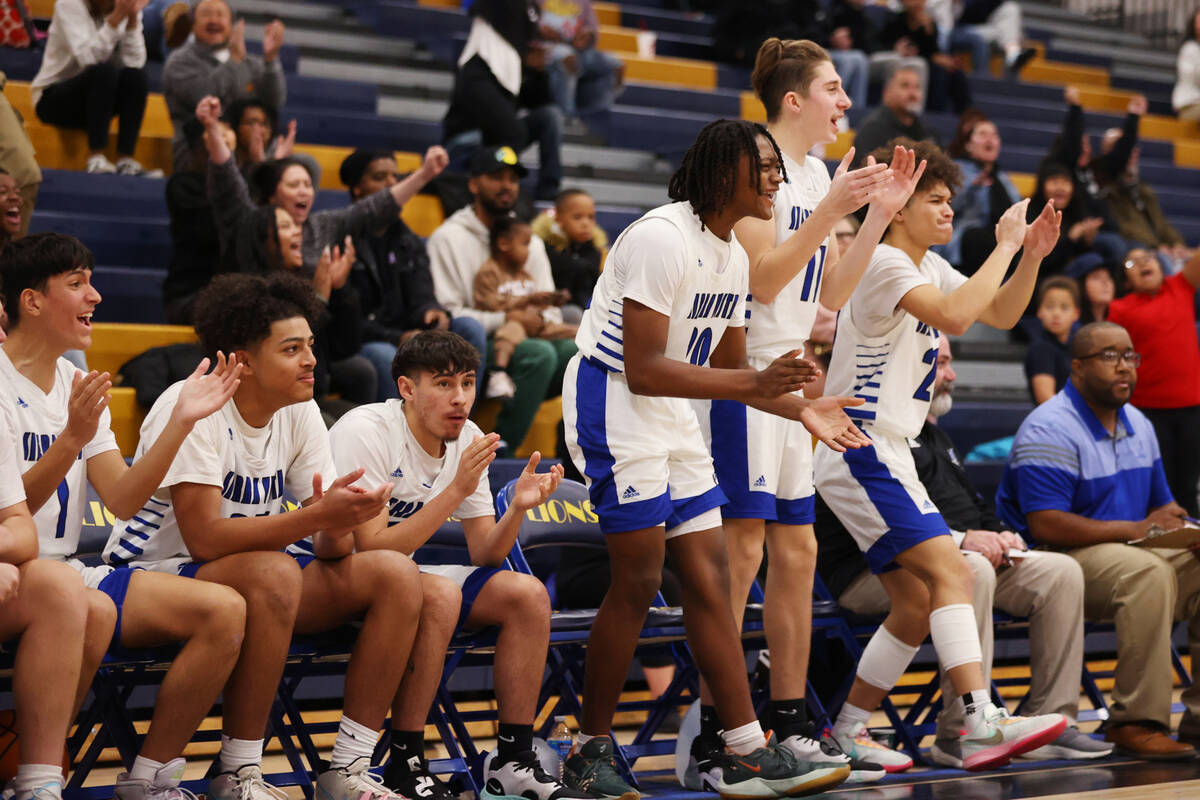 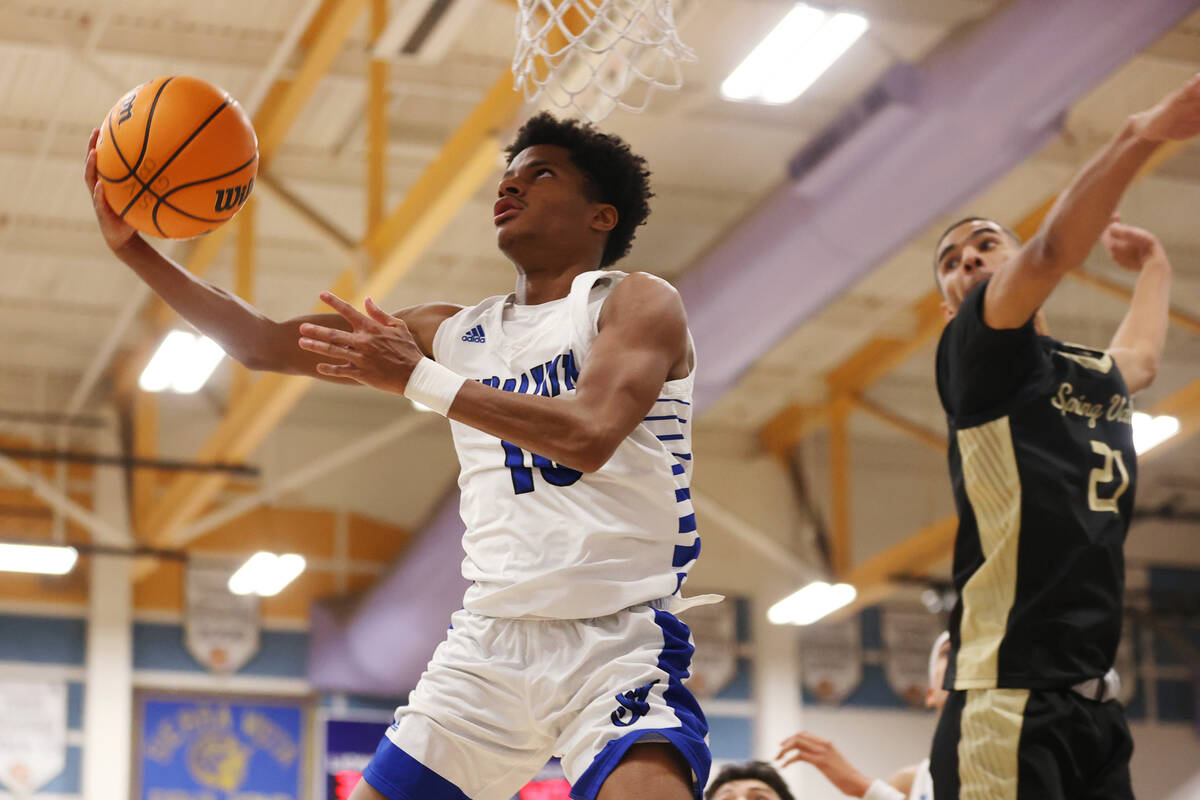 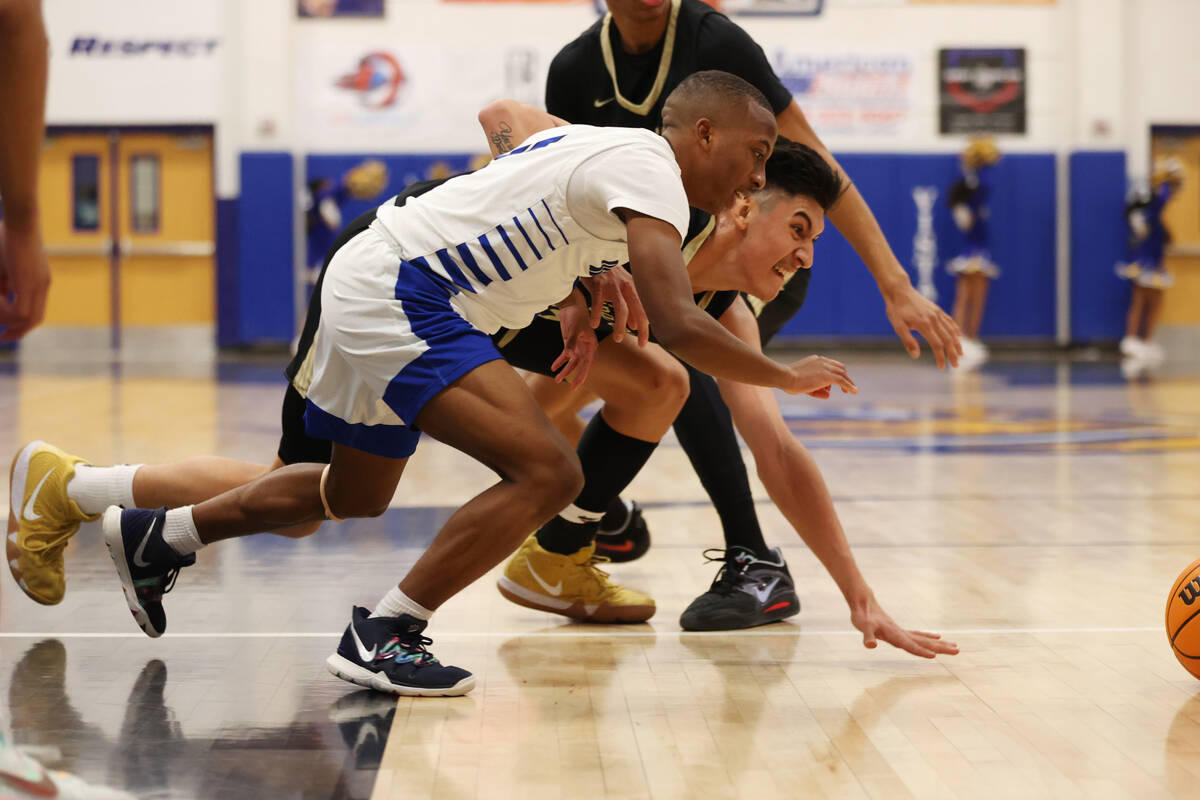 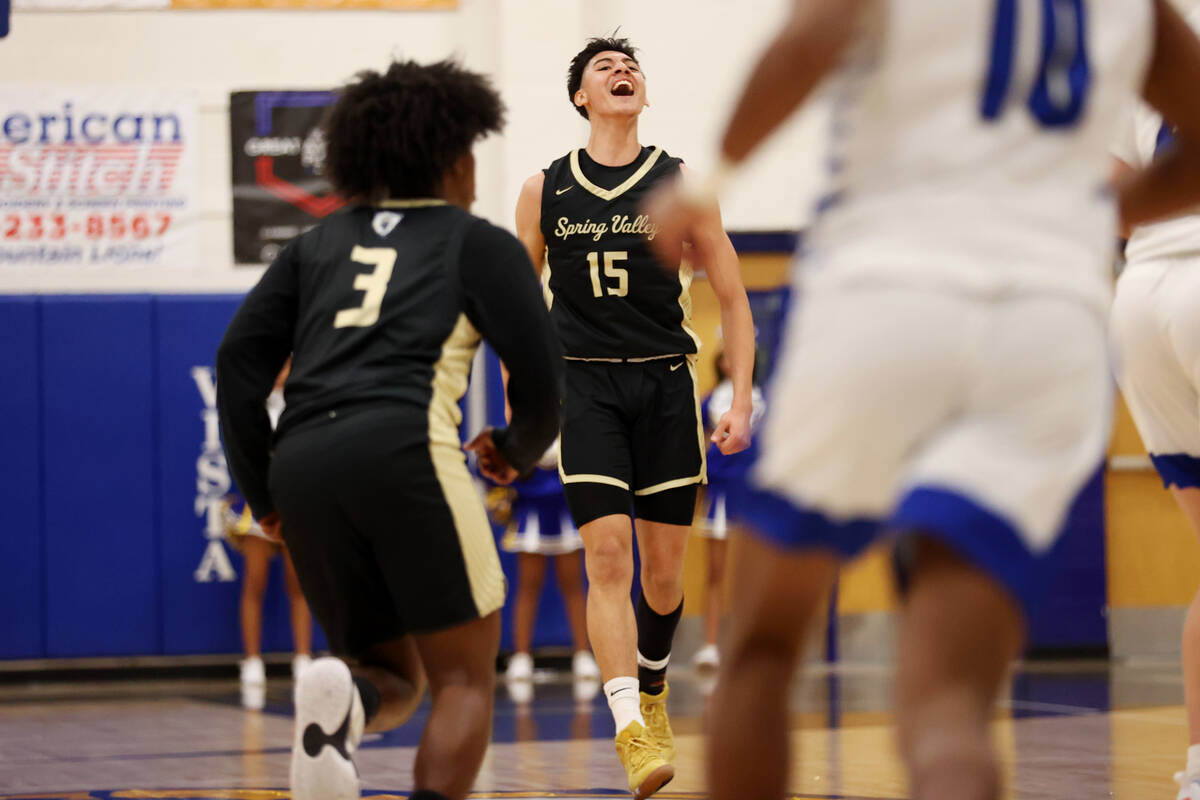 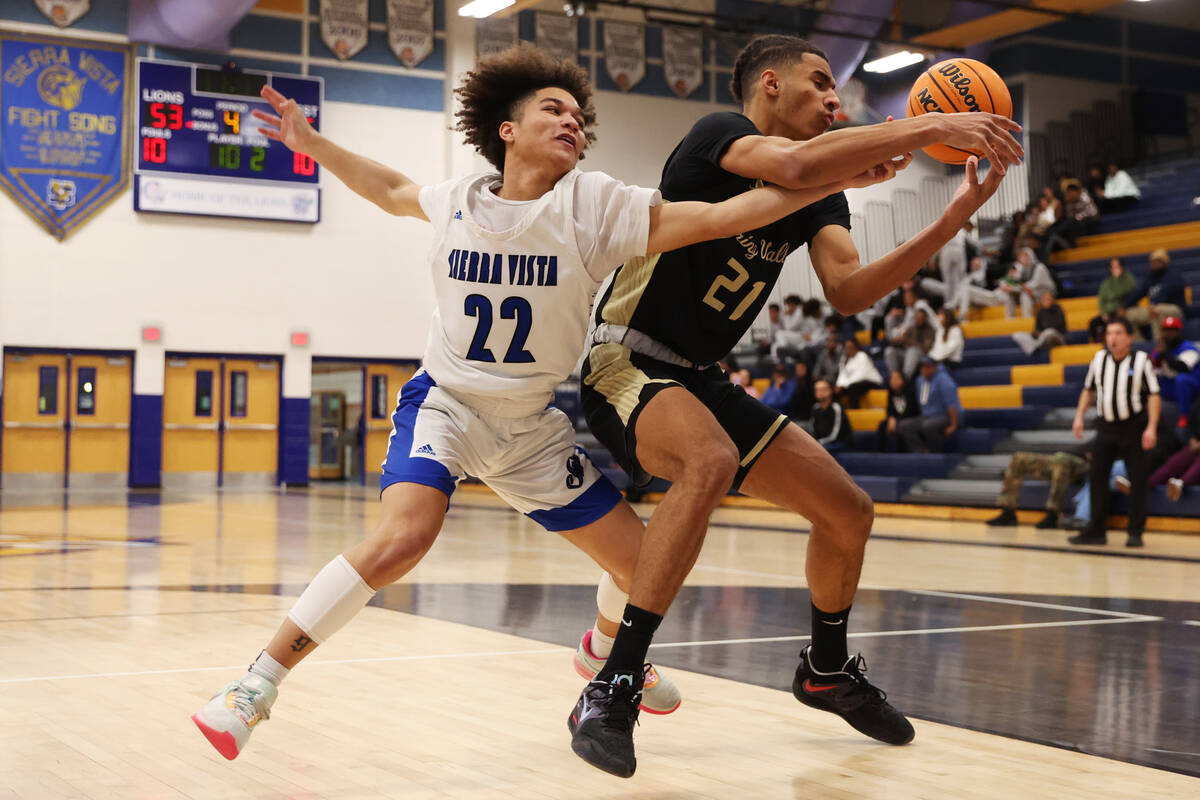 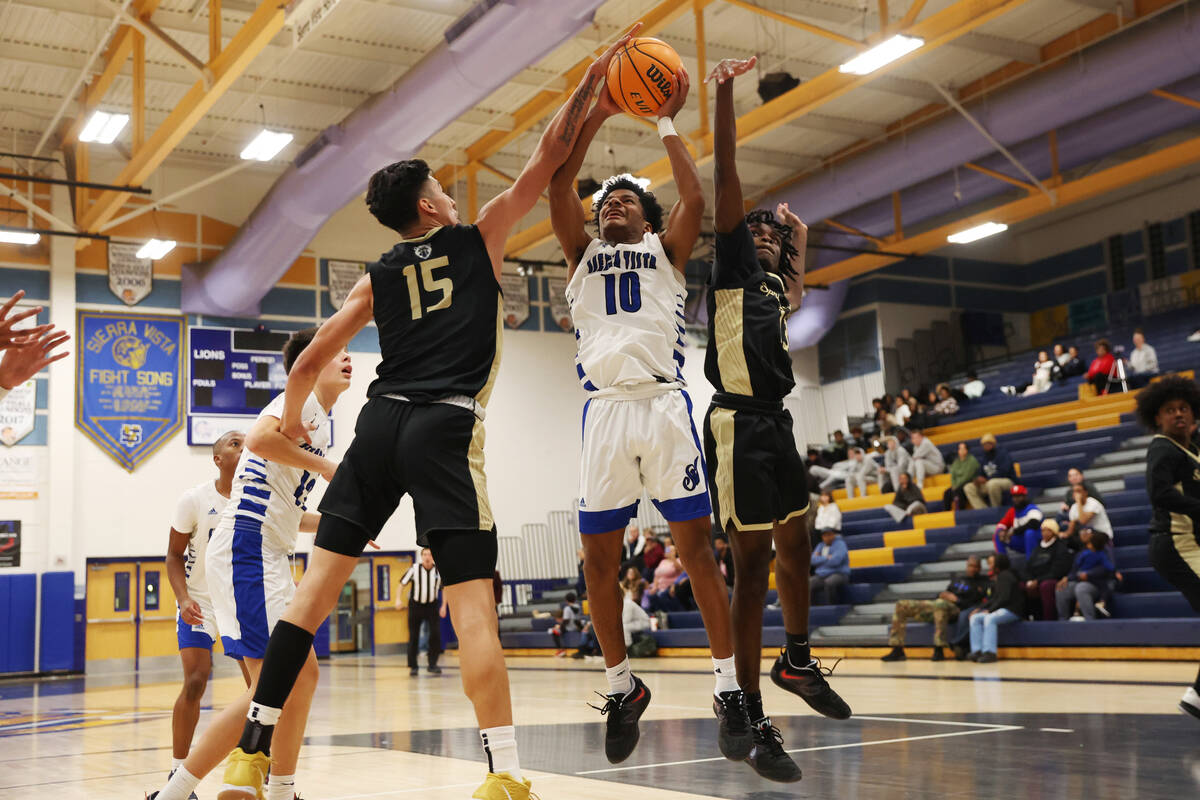 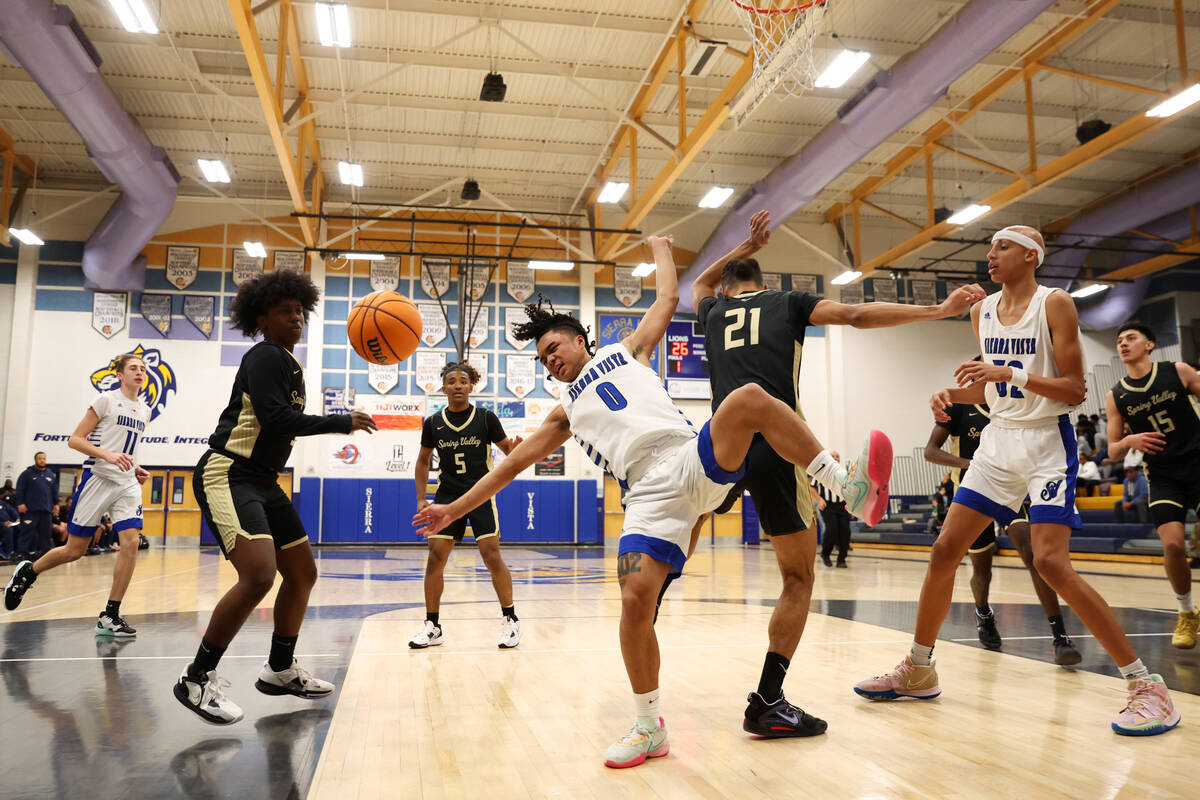 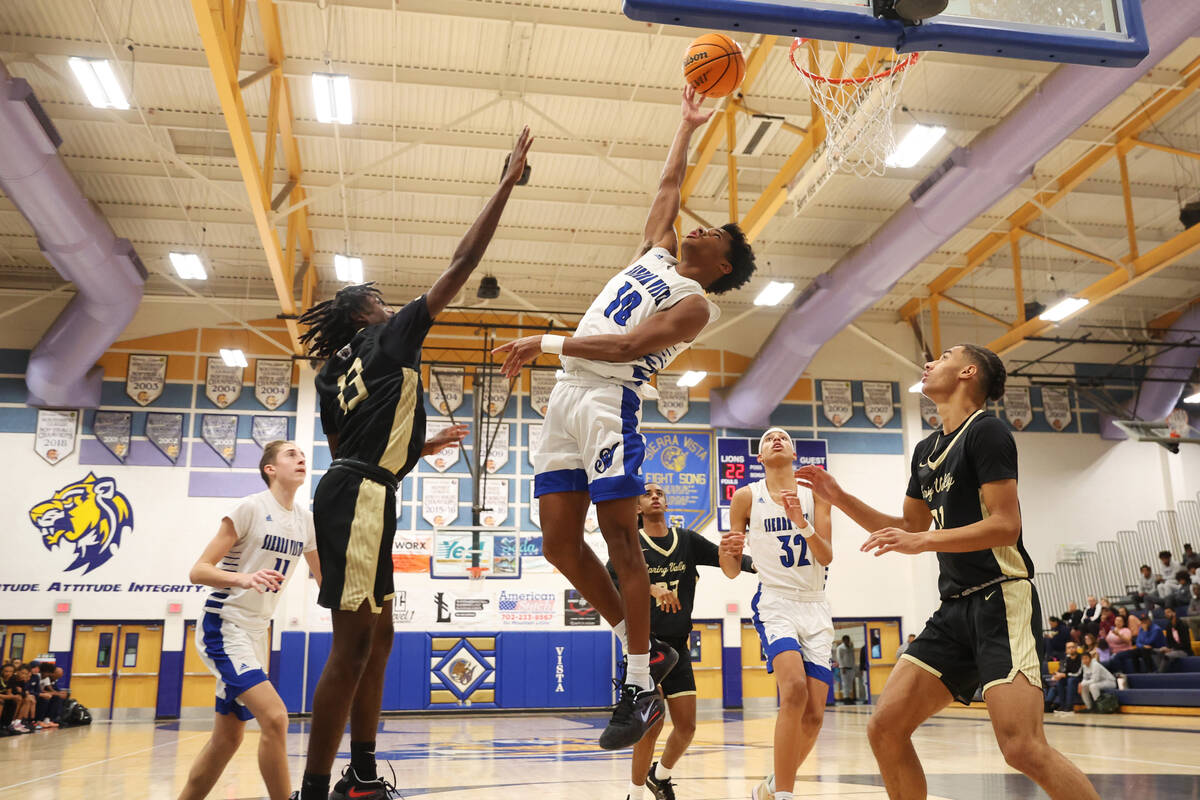 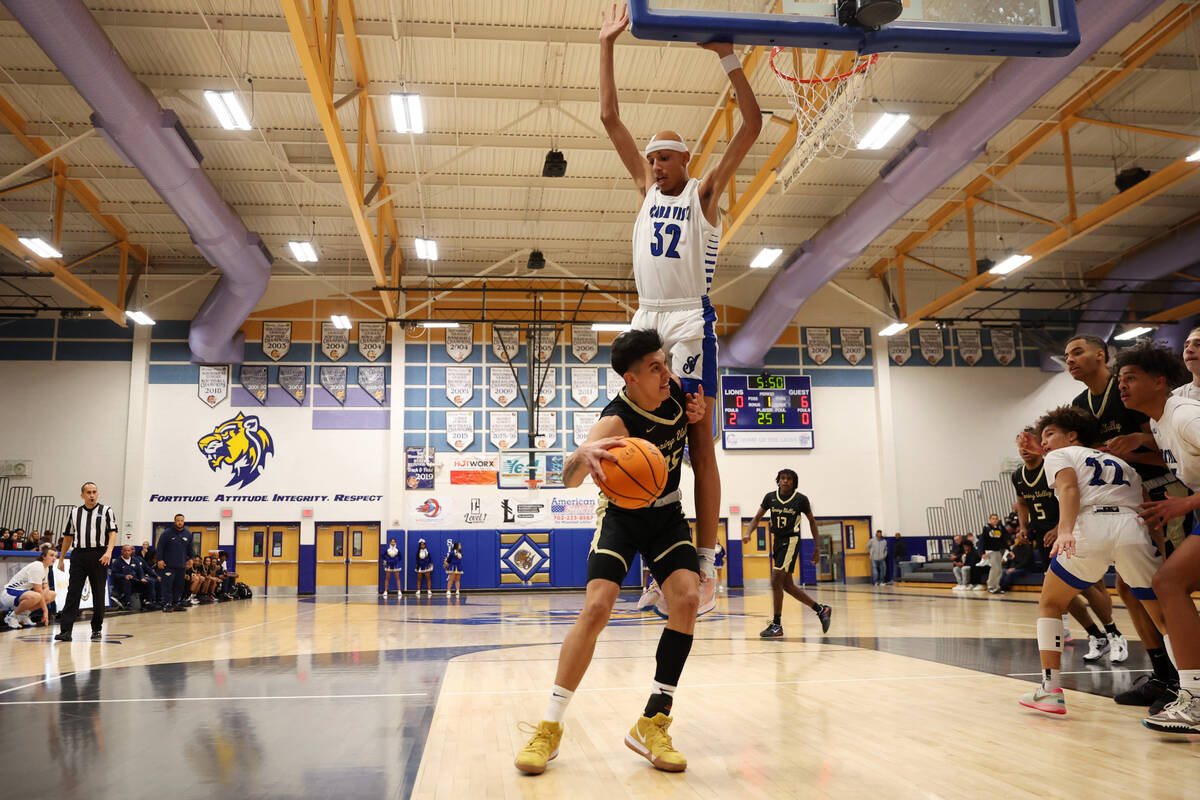 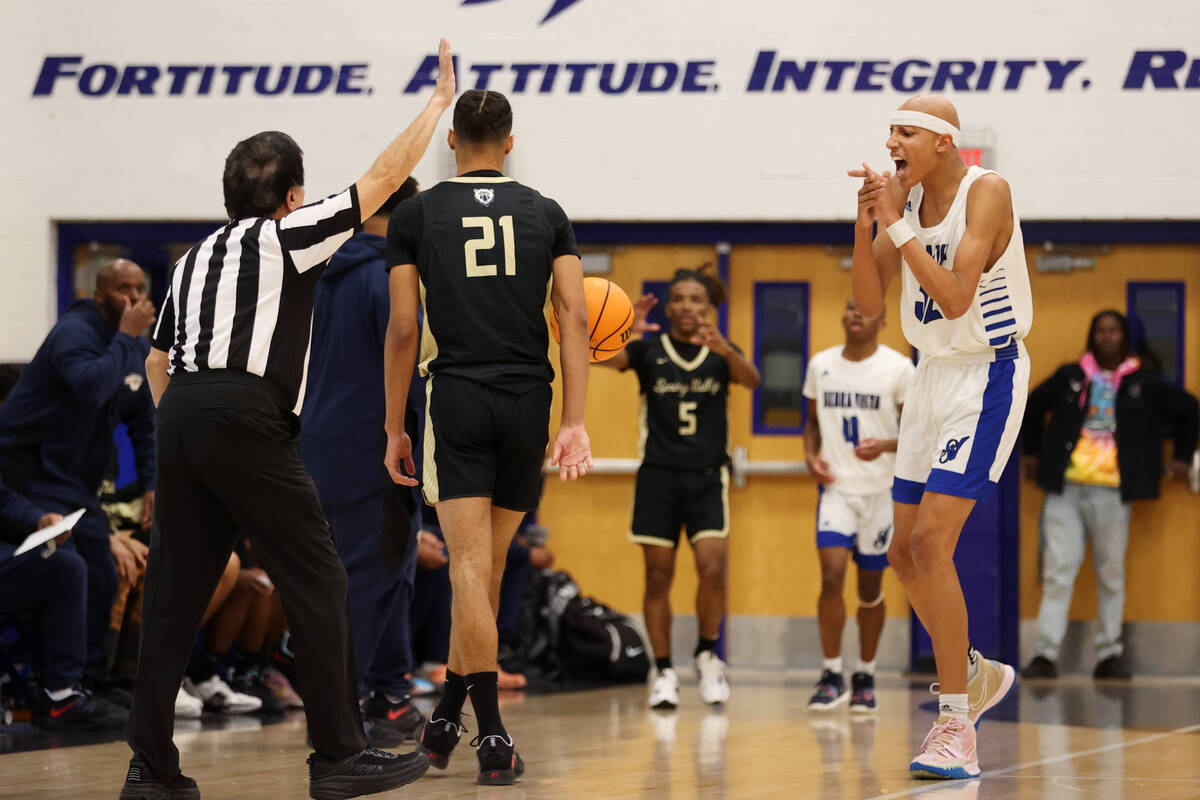 Spring Valley’s boys basketball team didn’t get to run its offense much in a ragged fourth quarter Friday night that saw the Grizzlies and Sierra Vista combine to shoot 33 free throws.

But the two field goals Spring Valley made couldn’t have been bigger.

Kaleb Daniel and Jordon Cosby hit 3-pointers in a 39-second span, and the Grizzlies went 13-for-20 from the free-throw line in the fourth quarter to hold off the host Mountain Lions 58-55.

“I’ve got trust in Jordon Cosby,” Spring Valley coach Paul Blair said. “He’s one of our snipers. He’s done this day in and day out. He did that in the state championship game last year, so I’ve got all the confidence in the world with him.”

Sierra Vista had cut the lead to 43-42 before Daniel hit his only bucket of the game, a 3-pointer from the right corner with 3:17 left that pushed the lead back to four.

After two free throws by the Mountain Lions’ EJ Dacuma, Cosby drained another 3 from nearly the same spot.

“When he let it go — and he was missing during the game — I knew one of them was going to go in,” Blair said. “Because he can get hot at any moment.”

Devin Mabry didn’t get much going within the Grizzlies’ offense Friday as he was going up against 7-footer Xavion Staton most of the night. But Mabry was 7-for-10 from the line in the fourth quarter, including a pair of free throws with 3.1 seconds left that made it 58-54 and essentially sealed the win.

“Huge,” Blair said. “He’s a big-time free-throw maker. A lot of people don’t know that about Devin. So we enjoy watching him get fouled.”

“His length changed a lot of our shots,” Blair said. “But our big guys, they’re used to it. We’re always playing other teams at a high level. We’ve played against all of these big-time guys that have big guys. So they’re used to playing against that. So it was nothing for them. It’s just another day at the office.”

But Spring Valley slowed the game down in the third quarter against Sierra Vista’s 2-3 zone, and the Mountain Lions (7-10, 1-2) took the momentum, closing the third quarter on a 6-0 run to cut the lead to 39-30.

“We were playing a little bit of stall ball,” Blair said. “Out here in Vegas they don’t have a shot clock, so of course I’m just going to go ahead and just pull it out and eat up the clock and make them come play man. But it kind of did slow the game down and probably killed our momentum.”

Sierra Vista went on an 8-2 run to start the fourth quarter, cutting the lead to 40-38 on a reverse layup by Manni Reed, who had all nine of his points in the second half to help spark the comeback.

But the Mountain Lions were never able to gain the lead despite never trailing by more than five the rest of the way.

Dacuma had 13 for his 19 points in the fourth quarter for Sierra Vista, and Staton had 10 rebounds and two blocked shots.

Kenneth Ned had 14 points and three assists for Spring Valley, which plays Mojave in the Big City Showdown at 2:30 p.m. Saturday at Cox Pavilion. The game is a rematch of last year’s Class 4A state title game, which Mojave won 69-61.

“I didn’t think about it until we got this job done, because this is a conference game,” Blair said. “Now we’re turning the page. I don’t know what’s going to happen tomorrow. The kids just got to get some rest, and we’ll come out and see what happens.”