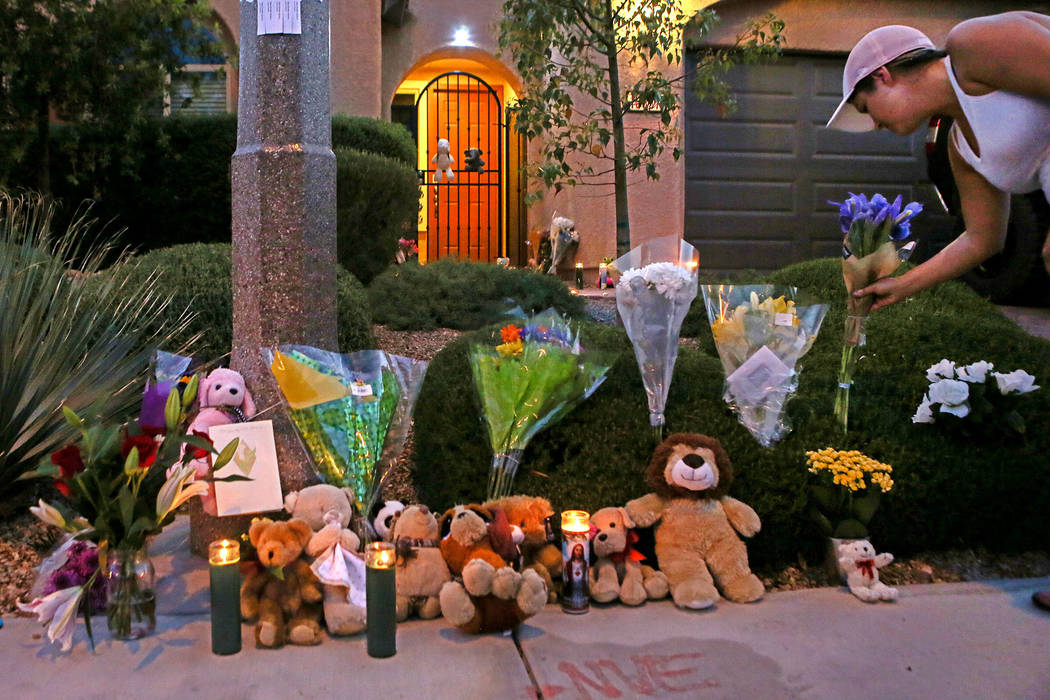 A woman leaves a flower bouquet at a makeshift memorial on the 10300 block of Numaga Road in Las Vegas on July 11, 2017, during a vigil for the three family members who died in a murder-suicide. (Bridget Bennett/Las Vegas Review-Journal) @bridgetkbennett

I spent most of my working hours last week in my car, driving to crime scenes, wiping sweat from my forehead, waiting for my air-conditioning to kick in.

The heat was relentless, but so was the violence: A double homicide, in which a baby was killed, followed by a suicide. A police shooting. Another homicide. (That was just as of late Tuesday).

Then a 16-year-old boy shot himself just as police moved to detain him. Two security guards were shot on the Strip. A child died after being left in a hot car.

Come into the office, drop your things, pick them back up, head to the scene. Repeat.

After a week saturated with shootings, deaths, injuries and arrests, I left for home that Friday night drained, depressed and done. I spent the weekend trying to recharge, but it was hard to come into work on Monday.

Maybe it’s because the bulk of it happened on my shift, I told myself. Then I countered: Maybe this is the new normal.

Another thought: Aside from the victims, and the families of victims, does anyone care?

It certainly didn’t feel like it, under the fluorescent lights at my newsroom desk. Then I listened to a voicemail from a woman named Sandy.

“I read your story on the internet,” she said, her tone direct, straightforward, though she didn’t name a specific article. “I have known two people here in Vegas that have had family members shot for no reason.”

I sat up in my chair a little, still listening.

“Just one day, no gunfire,” she pleaded. “No this, no that. No baby drowning. No baby in a hot car, which was ridiculous.”

She paused, and with her voice slightly softer, added, “I just wanted to share my opinion.” Click.

It wasn’t much, but it came at a good time — the affirmation that, if this is the new normal, it shouldn’t be, and that somewhere out there, at least one woman cared.

Sandy, you didn’t leave a return number, but if you’re reading this, I just want you to know I am so happy you called.

The truth is, this is the new normal. At least that’s what the numbers suggest: The Las Vegas Review-Journal ran a story Sunday that highlighted how homicides in Clark County are keeping pace with last year’s count, the highest in 20 years.

As of June 30, violent crime as a whole was also on par with last year’s totals.

But after that front-page story, which I helped write with two of my co-workers, Mike Shoro and Wesley Juhl, I didn’t hear from any readers. Silence.

And so the days continued, bringing new crimes and new stories, like another officer-involved shooting Tuesday.

In the next few weeks, I won’t be responding to crime scenes anymore. I’ll still be around — covering crime as a courts reporter. I’m excited about the change of pace.

But I hope you readers take notice and take care. Higher crime rates should make you angry, not just for the sake of being mad but as a call to action — to be more aware of your surroundings and more vocal in your communities, because you know them better than anyone else.