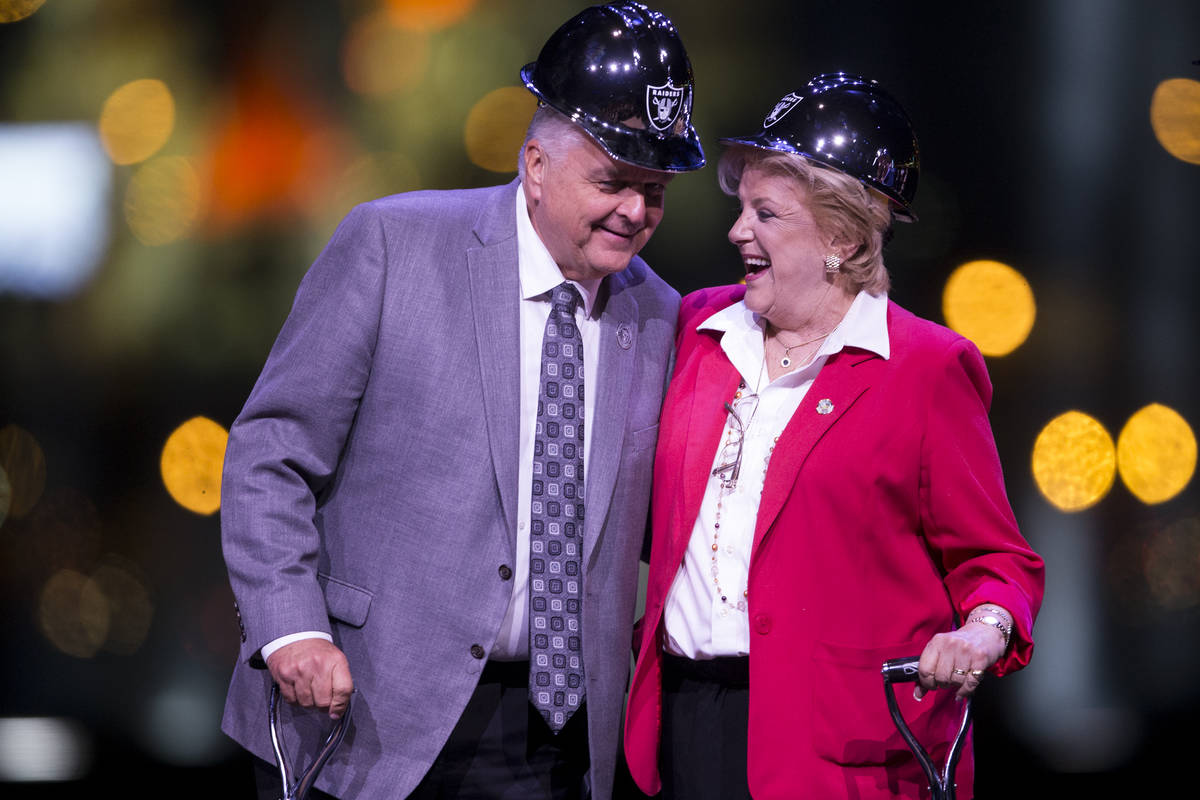 During a March 15 conference call with local elected leaders, Las Vegas Mayor Carolyn Goodman was expressing concern to Michelle White, the chief of staff for Gov. Steve Sisolak, that closing schools would be detrimental to children’s supervision.

Instead, the politically independent mayor suggested, there should be someone assigned at every point of entry to take the temperature of students. In school, she said, they would be in a safe environment.

Then, the Democratic governor cut her off.

“The decision’s been made in consultation with our health districts and the school superintendents. This is a courtesy call I’m giving you guys 20 minutes before I announce it,” Sisolak said, according to a recording of the call obtained by the Las Vegas Review-Journal. “The schools are closing tomorrow morning.”

That difference of opinion on how to handle schools amid the coronavirus pandemic mirrors the disagreement between the two over the response now: Goodman wants the state reopened, while Sisolak, guided by public health experts, has rebuffed her and set the parameters to start gradually lifting restrictions, warning last week, “we’re not there yet.”

It is not the first time these current leaders of Nevada and its biggest city have clashed. But their past is rooted in far less consequential matters: namely ribbon-cuttings and proclamations.

‘Line in the sand’

When Sisolak was chairman of the powerful Clark County Commission from 2013 to 2019, Goodman’s penchant for performing official duties at the Las Vegas Strip set the tone for their rocky relationship, according to former political colleagues, who were asked to shed light on the history between the two leaders.

“I would say they didn’t get along,” former Commissioner Susan Brager said. “I just think they put a line in the sand and they both need to stay there. It would be crises like this that would bring that line out again.”

Goodman on Monday acknowledged that she had gotten word to stay clear of county media events during Sisolak’s tenure, but she denied any personal rift.

“If he walked in the door, even though he has forbidden us from getting within 6 feet, automatically I would get up and give him a hug,” she said, adding that she could only speak for herself: “This is just me. I have great affection for him. I always have. And whether people think that’s (not true) … it’s genuine.”

Through a spokesperson, Sisolak declined to comment for this story.

To be clear, former commissioners and Las Vegas City Council members do not believe that old tensions between Sisolak and Goodman factor into the two leaders’ differing approaches to the coronavirus.

But they also said that discontent between the two strong-willed personalities can be traced to territorial lines often blurred in the public perception: The commission oversees the Las Vegas Strip in the unincorporated county, and the city council has jurisdiction over Fremont Street, downtown and everything else within city limits.

The distinction, probably lost on most Americans, was reintroduced when Goodman appeared on national television last week to amplify her case about reopening the state and acknowledged she did not oversee the Strip.

“I think Steve would get frustrated with Carolyn because she would not realize, or chose to ignore, that the Strip was in the county, not in the city,” said former Commissioner Chris Giunchigliani, who ran against both in mayoral and gubernatorial races.

Goodman, whose election in 2011 succeeded the three-term tenure of her husband, Oscar, got into the habit of presenting resolutions or a key to the city to people connected to the Strip, Giunchigliani said, adding that it wasn’t exactly deemed kosher to do so without notifying the other jurisdiction.

“I think they were kind to each other without really liking each other,” she added, suggesting that maybe Carolyn Goodman’s actions were a continuation of her husband’s administration, “because Carolyn was used to Oscar doing things that way so that is what she saw.”

The former lawmakers said existing long-term issues between the county and city, including how to tackle homelessness and attempts by the city to annex county territory, should also not be discounted when exploring the governor and mayor’s relationship.

Former City Councilman Bob Coffin said there probably is some static between them just “by virtue of being the leaders of those two organizations at the time.”

But the de facto role of the Las Vegas mayor, seen by most as the face of the region without consideration of jurisdictional boundaries, often included attending casino openings or giving proclamations even outside city limits.

Former Commissioner Mary Beth Scow, who resigned in 2017 before finishing her second term, said it created friction when people invited the mayor to events on the Strip without knowing the distinction.

“It’s a function of the name and the common perception that the whole valley is ‘Las Vegas,’ ” said Coffin, who served three terms through 2019. “That is a festering sore.”

After Goodman made a series of controversial statements to CNN’s Anderson Cooper last week, Sisolak said he was compelled to assure audiences that she did not speak for Nevada or reflect the sentiment in Las Vegas, and he acknowledged the significance of the mayoral seat.

Steve Ross, a three-term councilman between 2005 and 2017, said that mayoral presence did not appear to raise issues during the reign of Oscar Goodman, whose notoriously flamboyant style coexisted well with the humble leadership of former Commission Chairman Rory Reid, the son of ex-Nevada Sen. Harry Reid, who left the commission in 2011.

The former commissioners agreed with that narrative.

Sisolak’s emergence on the commission brought upon a major shift, according to Ross, who also served as Carolyn Goodman’s right-hand man as mayor pro tem. He recalled the county introducing a “key to the Strip” bigger than the city’s to present to luminaries.

When Mountain Ridge Little League, the eventual U.S. champion, arrived at the county-owned McCarran International Airport in 2014, Ross and Carolyn Goodman greeted the young athletes in their plane, he recalled. The county had its own celebration, setting up an elaborate stage at the baggage claim terminal, and it initially wasn’t going to let the mayor in, according to Ross.

Brager, who served for three terms to 2019, remembered being uninvited by a developer to a ribbon-cutting within city limits, even though it also was in her commission district, showing that the squabble went both ways.

And it’s spilled over into politics, too. In 2018, when Sisolak ran for governor against then-Attorney General Adam Laxalt, Oscar Goodman publicly backed Laxalt over Sisolak. He told a Las Vegas television station at the time that part of the reason he endorsed Laxalt was because the county had barred Carolyn Goodman from appearing at events on the Strip.

Carolyn Goodman, herself, expressed discontent after being disinvited to a Strip hotel party for Britney Spears in 2014; the county kept tabs on her appearances outside the city; she joked about moving the “Welcome to Fabulous Las Vegas” sign into city limits; and a county spokesman once referred to Sisolak as “Mayor of the Strip.”

Periodically, the county’s public information officers would send to the media a map, ostensibly to remind newer reporters to the valley where the jurisdictional lines of the city ended (at Sahara Avenue on the south) and where the county’s began.

The mayor said Monday she had not spoken to Sisolak since the briefing on school closures. But even as she pleas for a plan to reopen the state, “I can separate issues from personal relationships.”

“I’ve never had any ill feeling there, and how he is handling this, that is not even my comment to make because he is in a very tough position,” she said.

To her, Sisolak is the same man she suggested run for governor two decades ago because of his physical presence and sensitivity. Any suggestion otherwise, she added, is just perception.