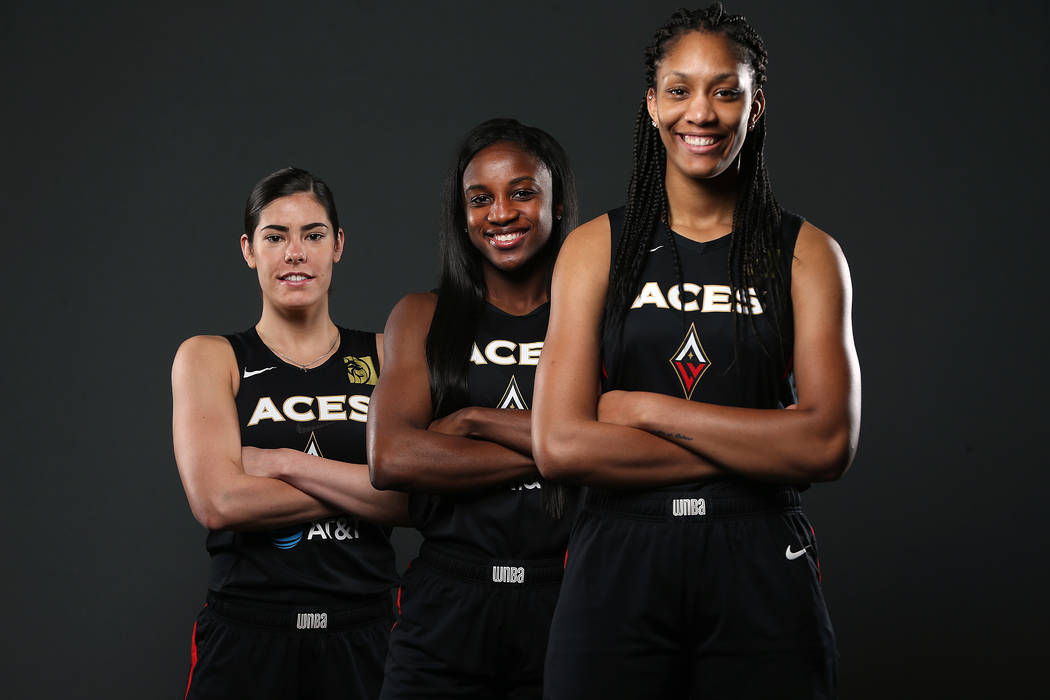 They’re different players from different places: One a sharpshooting scoring guard from Washington by way of San Diego. One a generational low-post prospect and national champion at hometown South Carolina. One a versatile, athletic guard born in Indiana and developed at Notre Dame.

But Kelsey Plum, A’ja Wilson and Jackie Young are in Las Vegas together as Aces — with one unique distinction reserved for one player a year. Or, in this case, one franchise in each of the past three years.

As No. 1 overall draft picks.

The Aces, formerly the San Antonio Stars, won the WNBA draft lottery in three consecutive years and took Plum, Wilson and Young in 2017, 2018 and 2019. The three, with All-Stars Kayla McBride and Liz Cambage, constitute the core of the team.

The distinction is an honor. And a challenge.

But all three have embraced it with grace.

The Stars finished 7-27 in 2016 and won the draft lottery. Plum spent the ensuing winter at Washington rewriting the record books and departed as the all-time leading scorer in Division I women’s basketball with 3,527 points. Her draft stock soared as she averaged 31.7 points in her senior season.

San Antonio tabbed her as the top pick in the 2017 draft.

“(She) went through that in San Antonio. The high expectations,” Aces coach Bill Laimbeer said. “Everybody says, ‘Why’d they draft her?’ The pressure was on her.”

Plum averaged 8.5 points on 34.6 percent shooting as a rookie, struggling at times against the league’s elite competition. The team then relocated to Las Vegas, and she returned as one of the WNBA’s best 3-point shooters.

The 5-foot-8-inch left-hander found a rhythm playing with Wilson and McBride and averaged 9.5 points on 46.7 percent shooting, including 43.9 percent from 3-point range. She looked even better in training camp this year, devoid of the pressure that accompanied her draft status.

“(My selection) was a little bit different than A’ja’s and Jackie’s because mine was kind of … it wasn’t as deep of a draft,” Plum said. “The expectations, I try not to focus on that, even now.”

The Stars finished Plum’s rookie season 8-26 and won the draft lottery again. Wilson, meanwhile, cemented herself as the consensus top draft prospect by averaging 22.6 points, 11.8 rebounds and 3.2 blocks in her senior season with South Carolina, the school she led to the NCAA championship in 2017.

San Antonio relocated to Las Vegas and became the Aces, and Laimbeer selected Wilson as the franchise’s first draft pick in April 2018.

On and off the basketball court.

The 6-foot-4-inch Wilson averaged 20.7 points and 8.0 rebounds to earn unanimous Rookie of the Year honors. She also emerged as the face of the franchise and showcased her sociable personality around the valley.

“When you get drafted to a team like the Las Vegas Aces and have a coach like Coach Laimbeer, he really helps you,” Wilson said. “He really helps to relieve that pressure.”

Wilson also befriended Plum at USA Basketball events and resumed their friendship in Las Vegas. She said Plum’s presence helped alleviate some of the pressure.

“We’ve always kind of gone back and forth with things. That’s just our relationship,” Wilson said. “She’s been through it just like I’ve been through it. We get on each other a lot. We joke around, but at the same time we hold each other accountable.”

Plum’s improvement and Wilson’s arrival weren’t enough to propel the Aces into the playoffs. They finished 14-20 and won the lottery again.

The 6-foot Young led Notre Dame to the national championship game as a junior last season. She then declared for the draft and was selected by the Aces three days after her final college game.

“I’m just trying to come in and play my game. Understand the plays and understand the game,” Young said. “The terminology that Coach uses is a lot different from college. The pace is a lot faster.”

Young already has forged a relationship with Wilson. The two chat regularly about life on and off the court, and Wilson said she has made a point to help ease Young’s transition.

“I’m just telling her everything that I didn’t know. Getting that fear of the unknown out of her body,” Wilson said. “That’s what stumped me in all of it. (I’m) definitely making sure she’s OK … not necessarily on the court but off the court as well.”

Plum didn’t conclude her obligations overseas until last weekend and arrived in training camp late, but she touted Young’s maturity and talent. The two will share the backcourt this season and presumably beyond.

Wilson will be with them for the journey. The three No. 1 overall draft picks.

“It does have its pressure, and it does have its expectations,” Laimbeer said. “At the same time, it depends on where you go and the hand you’re dealt.”