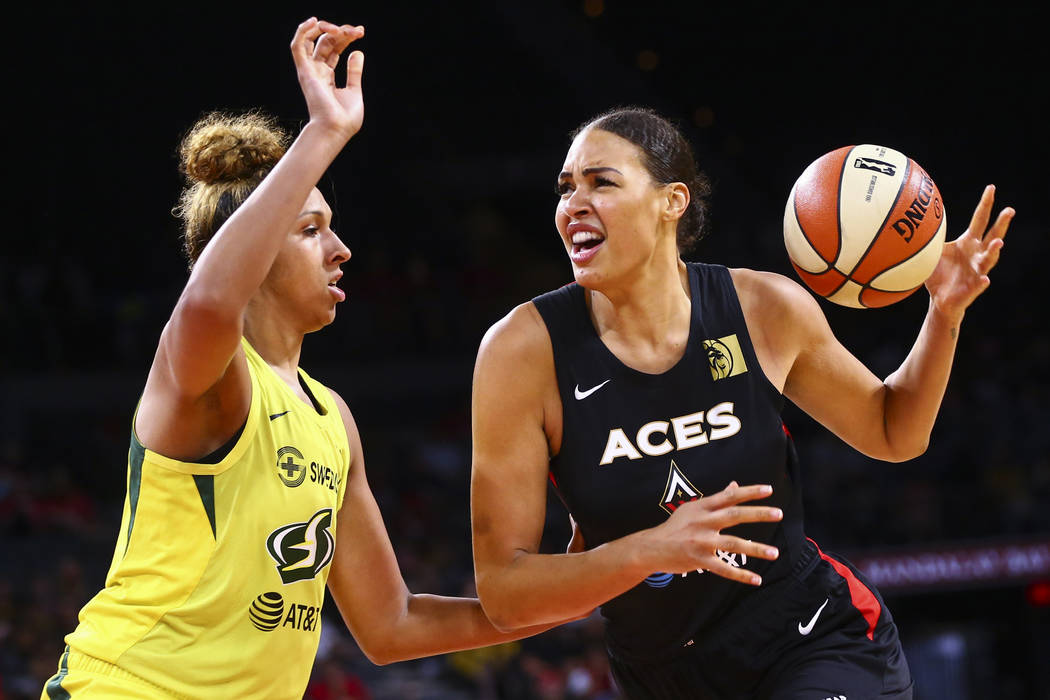 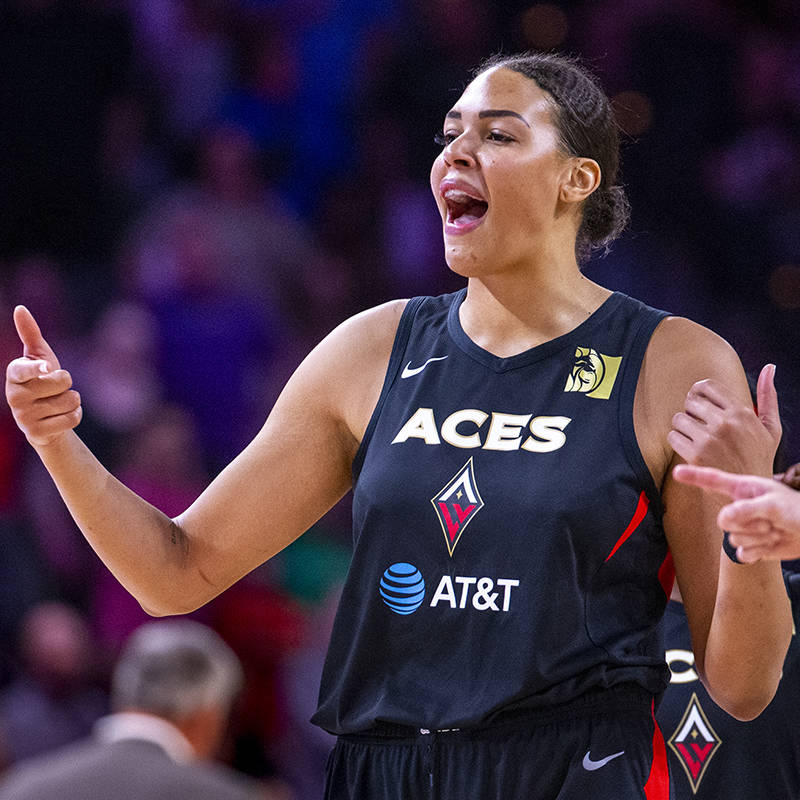 Las Vegas Aces center Liz Cambage (8) pumps up her teammates during the overtime period versus the Indiana Fever in their WNBA basketball game at the Mandalay Bay Events Center on Saturday, June 29, 2019, in Las Vegas. (L.E. Baskow/Las Vegas Review-Journal) @Left_Eye_Images 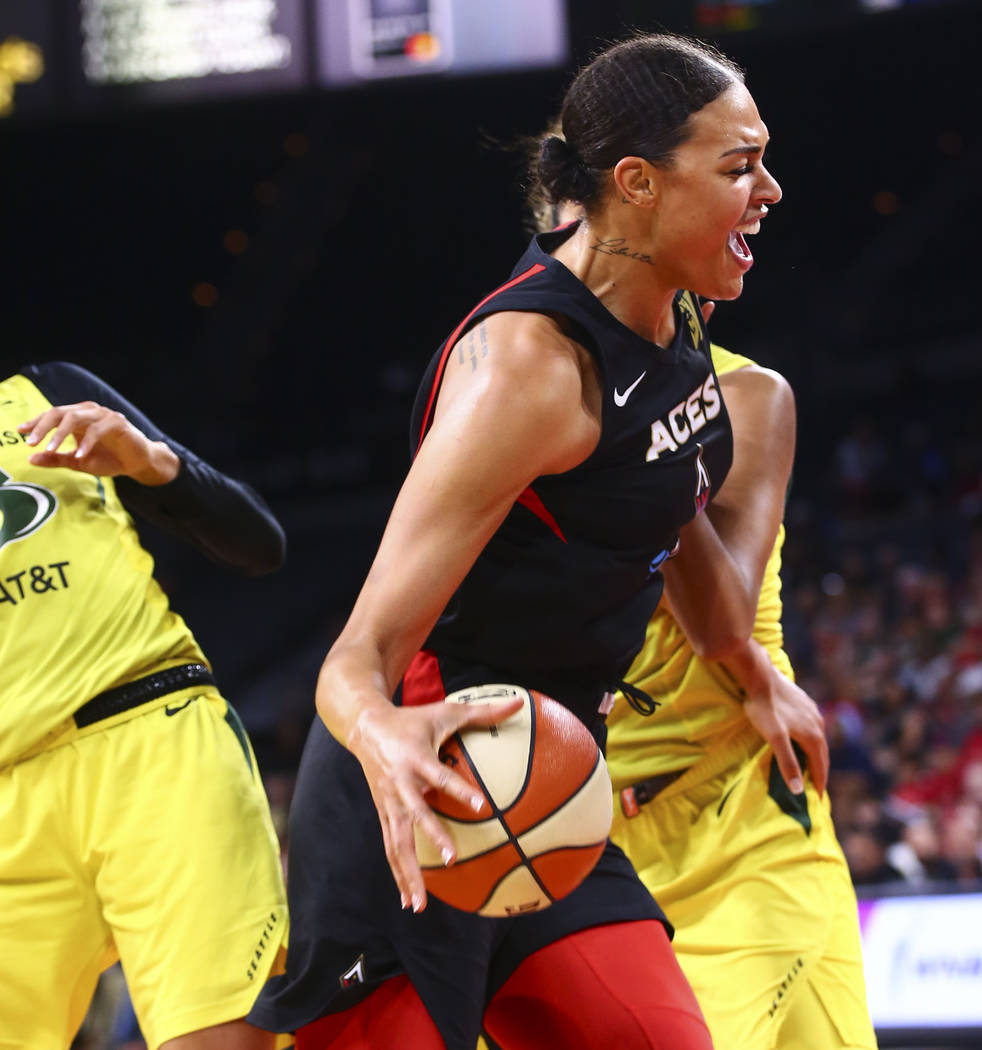 Las Vegas Aces' Liz Cambage drives to the basket against Seattle Storm during the first half of a WNBA basketball game at the Mandalay Bay Events Center in Las Vegas on Tuesday, July 23, 2019. (Chase Stevens/Las Vegas Review-Journal) @csstevensphoto 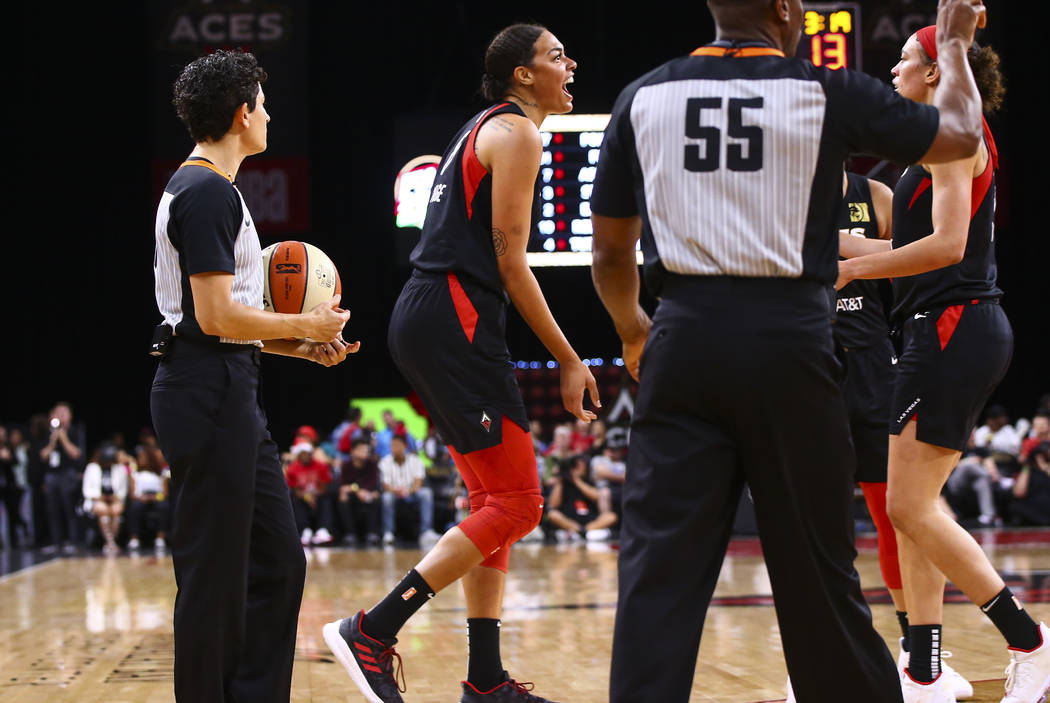 Las Vegas Aces' Liz Cambage reacts during the first half of a WNBA basketball game against the Seattle Storm at the Mandalay Bay Events Center in Las Vegas on Tuesday, July 23, 2019. (Chase Stevens/Las Vegas Review-Journal) @csstevensphoto 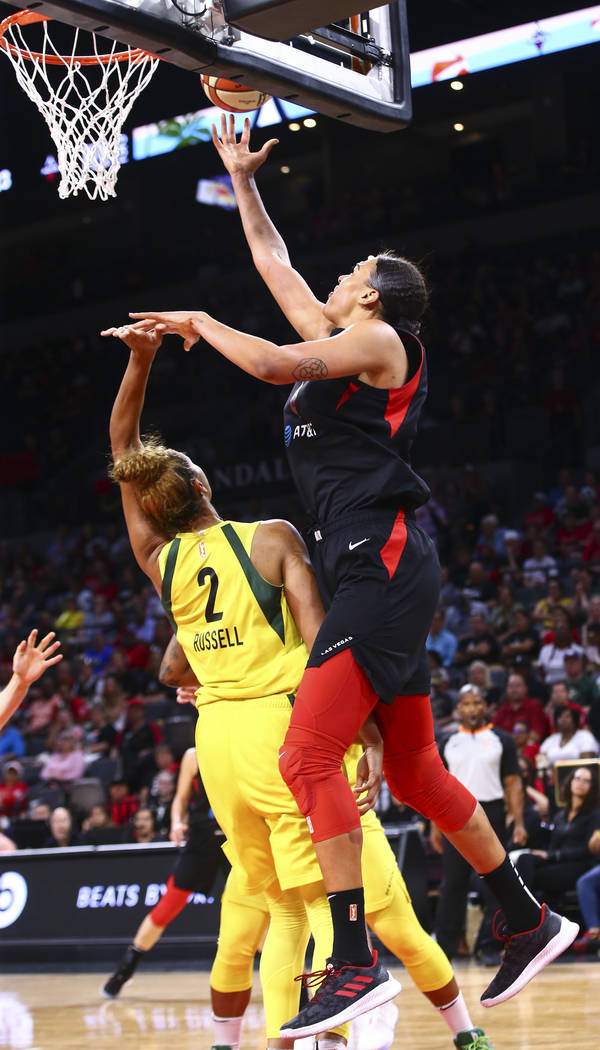 Aces All-Star Liz Cambage sat in front of her locker Tuesday night after a 79-62 victory over the Seattle Storm, her eyes twinkling and her smile radiating as she talked about a passion.

“I was really raised on house music,” said Cambage, who is averaging 15.8 points and 8.5 rebounds in her first season with Las Vegas. “It’s been something that’s always been a part of my life.”

Cambage, 27, doubles as a DJ and is playing a set Friday night with recording artists Snoop Dogg and Iggy Azalea at Mandalay Bay’s beach party as part of WNBA All-Star weekend. The 6-foot-8-inch center is a classically trained pianist and violinist and has a passion for music that equals — perhaps exceeds — her passion for basketball.

“It’s kind of like my meditation,” she said, “just getting in the flow and getting in tune with the beat.”

Cambage, who will play for Team Wilson in Saturday’s All-Star Game at Mandalay Bay Events Center, has befriended several artists and DJs. She spoke with the Review-Journal about her love for music, becoming DJ Liz Cambage and what to expect from her set Friday. The beach party begins at 9 p.m. For ticket information, visit http://bit.ly/WNBAallstar.

RJ: What has music meant to you? Not just today but throughout your life? What’s your passion like for it?

Cambage: Music is everything. It means a lot to everyone. There are songs that I just have crazy connections with, and it just takes you back to memories and makes you feel all the feels. I use music to get me pumped before games. I use music to calm me down at night. Some days I listen to techno, some nights I’m in the kitchen listening to classical music. I really switch it up with what I listen to. Music is life.

RJ: When did you know you wanted to become a DJ?

Cambage: I’ve wanted to DJ since I was 15 years old, but I had no one to teach me. I was lucky that in my 20s, I had a lot of friends that DJ’d. They taught me.

Cambage: It’s not easy, learning to beat match isn’t easy. But once it clicks — it’s like learning a new move. Once you get it, it’s like, Yes, I’ve got it now, and I can do it all the time. But I was horrible when I started, and a lot of people around me were telling me I was great. I had a lot of yes people around me, but I was lucky I had one friend who was like, Liz, what are you doing? … That ain’t it. I was lucky I had one friend that sat me down and taught me how to beat match.

RJ: How often do you practice? What goes into getting better?

RJ: What’s it like when you’re spinning a set and the crowd is feeling it? You know that you’re the reason everybody is having a good time.

RJ: You have a lot of friends that are musicians. How have you been able to meet people and connect with people through music?

Cambage: I’m so lucky that basketball has put me on a platform where I get to connect with other people as well. Through my years of growing up in Australia and partying and meeting people, I’ve met so many people from just so many different walks of life and so many different backgrounds that I’m really lucky that wherever I go I usually have friends DJing or doing something with their lives with music, all around the world.

RJ: On Friday night, what can the people expect from a set from DJ Liz Cambage?

Cambage: I’m playing a house set, so I know I’ve got Iggy and Snoop after me, hip-hop and rap, so I’m going to be throwing out a few hip-hop edits, but I’m going to stay true to me and play some house and get the crowd moving.

RJ: How long have you been getting ready for it?

Cambage: I need a little bit more time, but it’s been hard. We were just on a four-game road trip. Limited time here. But I’m going to get it together. I’ve got a couple days.