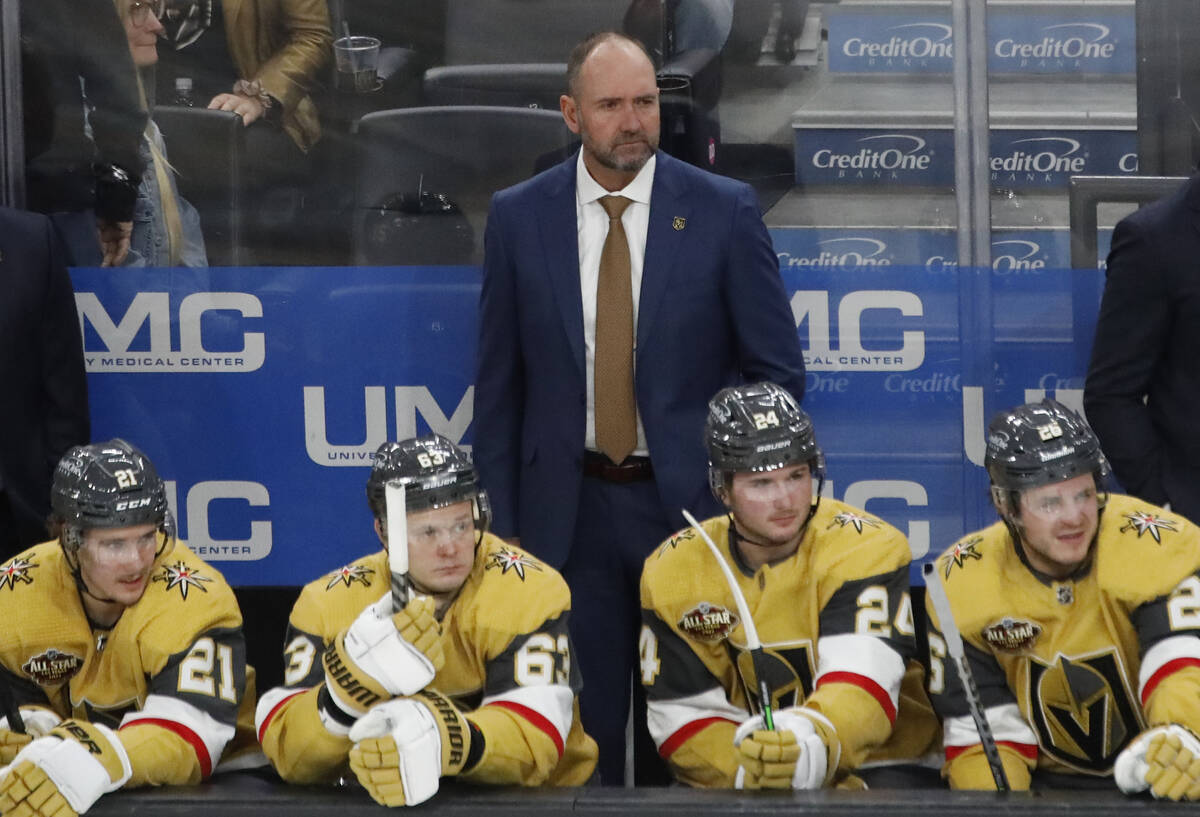 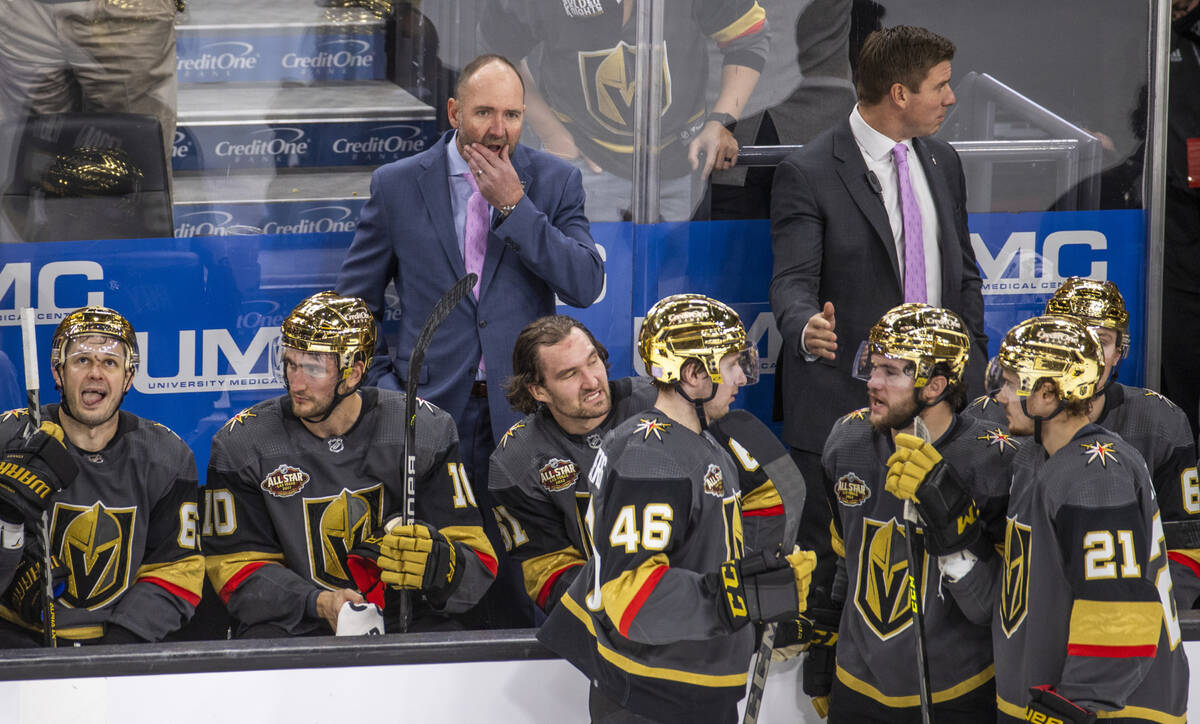 Golden Knights head coach Pete DeBoer waits to see if their third goal is counted versus the Columbus Blue Jackets during the third period of an NHL game at T-Mobile Arena on Saturday, Nov. 20, 2021, in Las Vegas. (L.E. Baskow/Las Vegas Review-Journal) @Left_Eye_Images 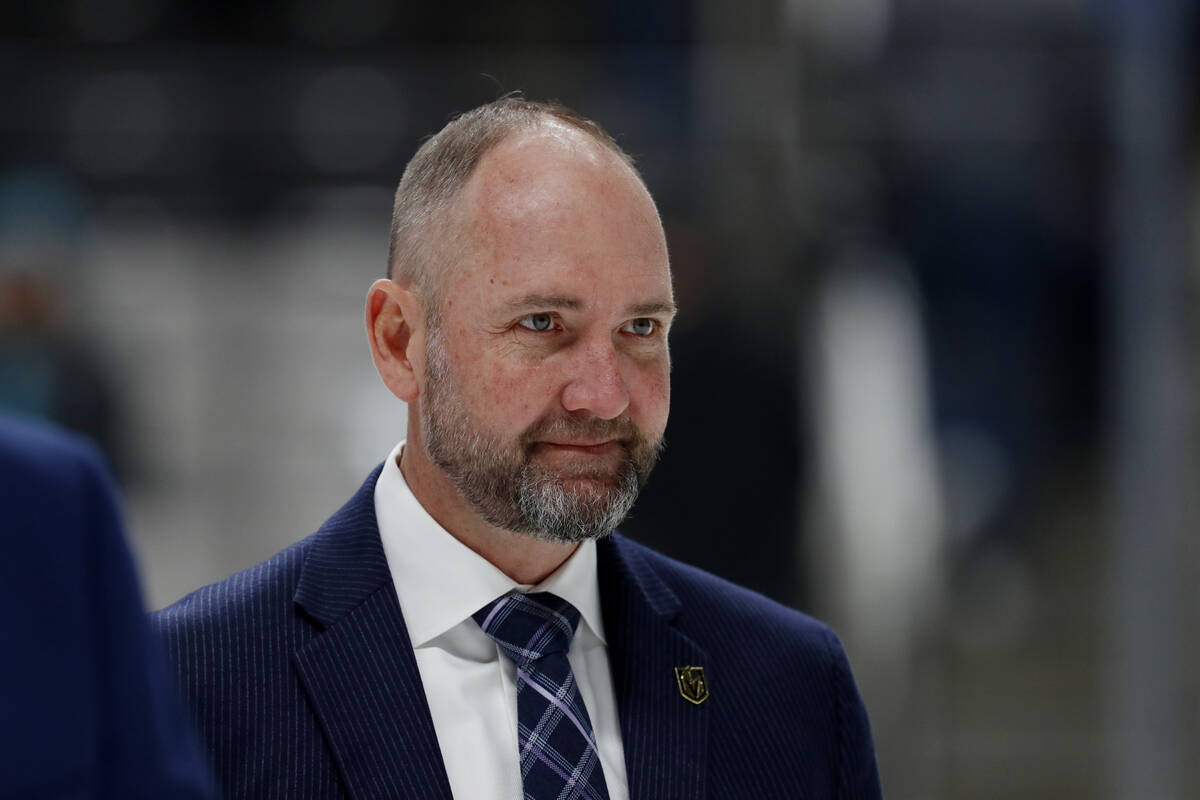 Pete DeBoer entered the NHL with nearly the same level of fanfare as the top prospects he coached.

After a highly successful run in junior hockey, DeBoer was courted in 2008 by Florida, Ottawa and at least one other unnamed team. The Panthers signed him to a four-year contract on his 40th birthday and hoped DeBoer could lift the franchise out of its doldrums.

“I remember feeling that I wanted to take the next challenge,” DeBoer said. “And then I got to work and realized I wasn’t close to ready.”

Despite flopping in Florida during his first pro coaching gig, DeBoer has lasted long enough behind the bench to approach two significant milestones.

Entering the Golden Knights game Sunday at San Jose, DeBoer is two victories shy of 500 for his career and also nearing 1,000 games coached.

To those that know him, it’s not a surprise DeBoer became a successful coach in the NHL. He’s always been highly competitive and motivated by the intellectual challenge that job presents.

It’s not enough for DeBoer to come out ahead. He wants to outsmart the other team along the way.

“There’s lots of people you meet that are win at all costs, that want to win at everything,” former NHL coach Paul Maurice said. “They’ll drag race you in the street regardless of other people’s safety. He’s not like that.

‘Quick on his feet’

DeBoer got his start as an assistant under Maurice in 1994 and spent 13 seasons coaching in the Ontario Hockey League. He was named coach of the year in the OHL twice and led Kitchener to the 2003 Memorial Cup, the top prize in Canadian junior hockey.

That success opened the door to the NHL, but DeBoer missed the playoffs all three seasons in Florida and was fired in 2011 with a year left on his contract. The only job offer he received that summer was from the New Jersey Devils.

“I didn’t know what my next step was going to be, whether I was going to have to take a step back and be an assistant or go back to junior,” DeBoer said. “(Devils general manager) Lou Lamoriello hired me, and I went from a coach that had never made the playoffs in his short NHL career to coaching in the Stanley Cup Final that spring.”

The Devils lost the series to Los Angeles in six games, but the trip to the final in 2012 helped solidify DeBoer’s coaching resume. He was hired by San Jose in 2015 and guided the Sharks to the Stanley Cup Final in his first season, further enhancing his reputation.

DeBoer has shown the ability to adapt his systems, with his best teams swarming and frustrating the opposition in all three zones. And he’s managed to blend the old-school physicality with the youthful skill that has entered the league in recent years.

It’s that challenge of analyzing a situation and finding a solution that drives DeBoer, particularly in a playoff series.

“Identifying the problem and having a plan to fix them is what he’s good at,” Maurice said. “He’s very quick on his feet.”

Those traits helped DeBoer when he was hired by the Knights on Jan. 15, 2020. After developing a heated rivalry with the club during his time coaching San Jose, DeBoer diffused any tension that might have existed and quickly put his stamp on the team.

“Pete is a really intelligent guy with great experience,” Knights general manager Kelly McCrimmon said. “For me, it’s a progression where he’s always been able to keep learning. He has done a really good job as our head coach.”

During his time in the NHL, DeBoer has seen a change in younger players who want to know why a coach made a decision.

As a former lawyer and the father of three college-age kids, DeBoer has been able to adjust to the new style of coaching. He said he always has been prepared to present his case to a player if needed.

“The important thing is he has a lot of respect for us as players and listens to us,” defenseman Alex Pietrangelo said. “He’s a real good communicator. And obviously systemwise he demands a lot, but that’s what’s made him a successful coach for so long.”

Despite all of his success, the Knights’ division crown in 2019-20 was DeBoer’s first as a coach in the NHL. And he’s still trying to solve the Knights’ postseason scoring issues that have derailed their pursuit of the Stanley Cup.

“It’s been a wild ride. I will tell you, I’d never get this opportunity without my family,” DeBoer said. “If I get a chance to reflect on it, when I do it’ll be them first and the staff and the support people I’ve had and the players over the years second.”