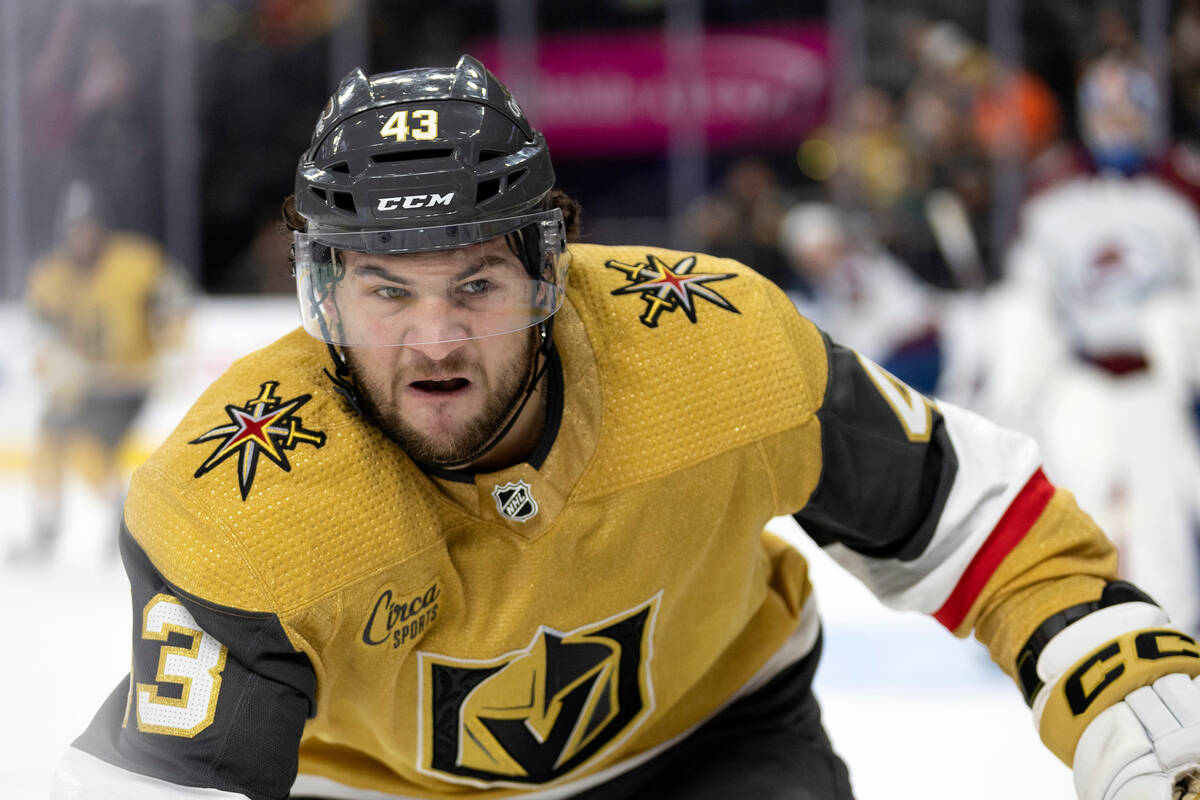 Golden Knights center Paul Cotter (43) skates for the puck during the third period of a preseason NHL hockey game against the Avalanche at T-Mobile Arena on Wednesday, Sept. 28, 2022, in Las Vegas. (Ellen Schmidt/Las Vegas Review-Journal) @ellenschmidttt

Paul Cotter, before he became the Golden Knights’ shootout hero Monday, was worried.

He admitted he’d been in his head the past few games. The 23-year-old rookie kept getting in the lineup but wasn’t making an impact. He played a team-low 9:36 before stepping up in the seventh round against Columbus, two days after coach Bruce Cassidy said Cotter’s play has dropped since an impressive training camp.

The Knights have to hope a game-winning goal boosts Cotter’s confidence. But there’s a larger issue at work as well: His line is still searching for an identity.

Cassidy recently elevated center Nicolas Roy to play with Cotter and right wing Phil Kessel, but finding a role for the group is a work in progress.

“Their line, we’re working through some issues,” Cassidy said.

The Knights, since loading up their top six Oct. 22 against Colorado, have had three mostly consistent lines.

The question has been who plays with Kessel to get the most out of the 403-goal scorer. Cotter joined him Nov. 10 against Buffalo after being a healthy scratch for three weeks. Centers Brett Howden, Jake Leschyshyn and Michael Amadio were each given time between the two before Roy stepped in the last two games.

The goal is for this trio to click better than previous ones did. The Knights have been outscored 5-2 with Cotter and Kessel on the ice together at five-on-five, according to the website Natural Stat Trick. Kessel has one goal in his last eight games, while Cotter doesn’t have a point.

“Phil and (Cotter), they have a lot of skill there,” Roy said. “If we can go in the offensive zone, I think we’ll create some chances for the team for sure.”

Cassidy wants to see if Roy’s large frame and ability to make plays below the goal line will mesh with Cotter’s straight-line game and Kessel’s offensive skill. Roy is off to a strong start to his fourth season with the Knights with 12 points in 21 games.

Cassidy doesn’t want him to change his game despite the move up. The goal is for Roy to balance out the trio so it can be trusted in different situations, like how two of Pittsburgh’s main penalty killers in Carl Hagelin and Nick Bonino teamed up with Kessel for the “HBK” line that dominated the 2016 Stanley Cup playoffs.

“They had a bit of both on that line so they could always trust it,” Cassidy said. “That would be where we would go with that a little bit.”

Roy’s addition hasn’t sparked the group so far, but perhaps Cotter’s game-winner will do the trick.

It’s clear his teammates believe in him. Goaltender Logan Thompson called for Cotter to get a shootout attempt Monday. Cassidy said players on the bench were asking for the rookie as well. He delivered.

He needs to build on that with his new linemates. Otherwise, Cassidy will have to continue to come up with solutions for a group that hasn’t gotten going yet.

“They want to score,” Cassidy said. “They want to help. Some days it’s just a matter of do your job, do it well and help us win.”