General manager Kelly McCrimmon updated the media on Monday on the status of the Golden Knights team members who went into COVID protocols and gave updates on several games being moved to future dates. (Heidi Fang/Las Vegas Review-Journal) 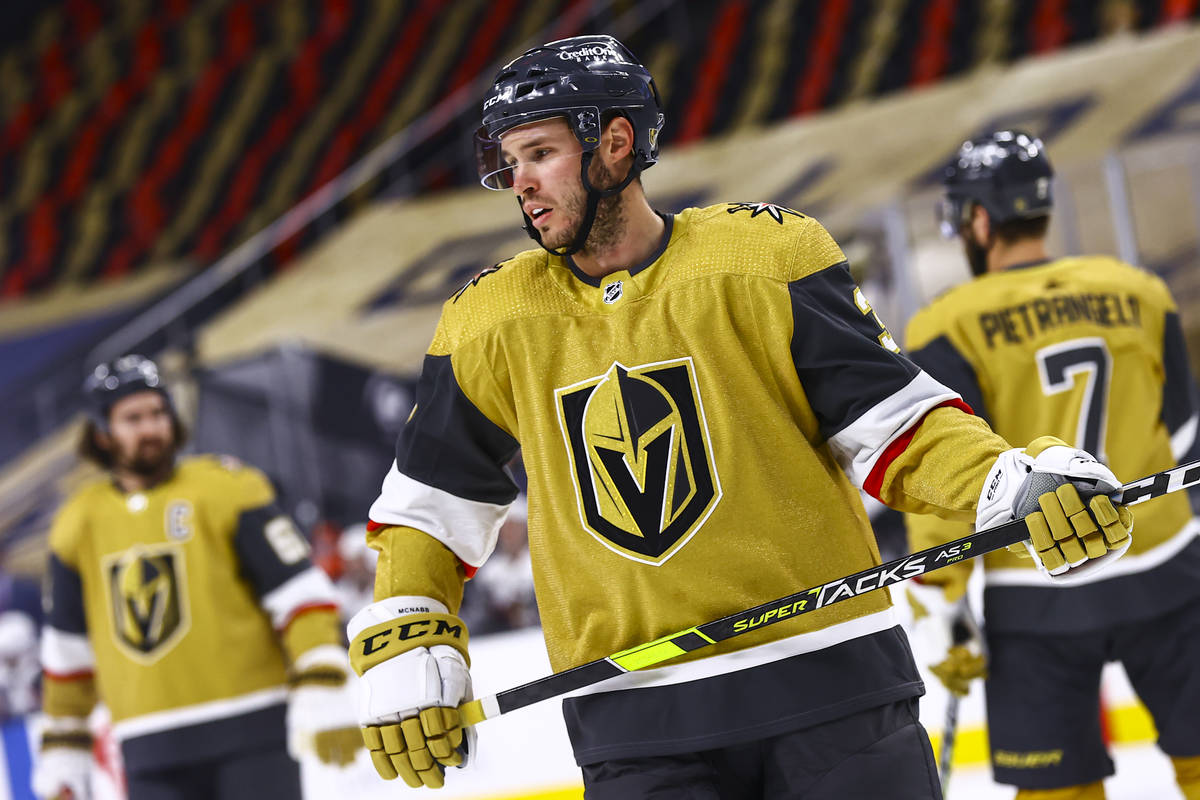 Going on LTIR means McNabb must miss a minimum of 10 NHL games and 24 days. The earliest he can return is Feb. 27 against the Anaheim Ducks after the league adjusted the Knights’ schedule Monday. The team is allowed to exceed the salary cap by up to his $2.5 million cap hit while he’s out.

McCrimmon said McNabb will be re-evaluated when he’s eligible to return.

“I don’t think there’s any tremendous complexity to the injury, but it is one that’s going to require some time,” McCrimmon said.

McNabb, 30, played 21:33 against the Blues and finished his last shift with 58 seconds remaining. He has been one of the Knights’ ironmen. He’s played in 283 of the franchise’s 289 games, including the postseason.

McNabb is considered one of the team’s top defenders and skates on the first pair with partner Alex Pietrangelo. Both now may be out for some time, as Pietrangelo is on the NHL’s list of those unavailable to practice or play because of the league’s COVID-19 protocols.

McCrimmon did not provide a timeline for Pietrangelo’s return Monday.

“The timelines aren’t finite,” McCrimmon said. “The exact days, we don’t have that.”

Knights working to get Dorofeyev to Henderson

The Knights signed forward prospect Pavel Dorofeyev to a three-year, entry-level contract Jan. 25 and are working to get him to join the Silver Knights.

Dorofeyev, 20, reportedly terminated his contract in Russia to get his North American career started. The next step is to get him through the immigration process so he can come to Henderson.

“I believe it’s going a little bit better than expected, but it’ll still take a period of time for all of that to be taken care of,” McCrimmon said.

Dorofeyev was selected in the third round, 79th overall, by the Knights in the 2019 draft. McCrimmon said the team hoped to get him to North America sooner, but he signed a two-year extension with Metallurg Magnitogorsk of the Kontinental Hockey League in October 2019.

Dorofeyev was traded in June and played in one KHL game this season before deciding to leave.

The American Hockey League released an updated Pacific Division schedule Monday because the Stockton Heat were temporarily relocated to Calgary this season.