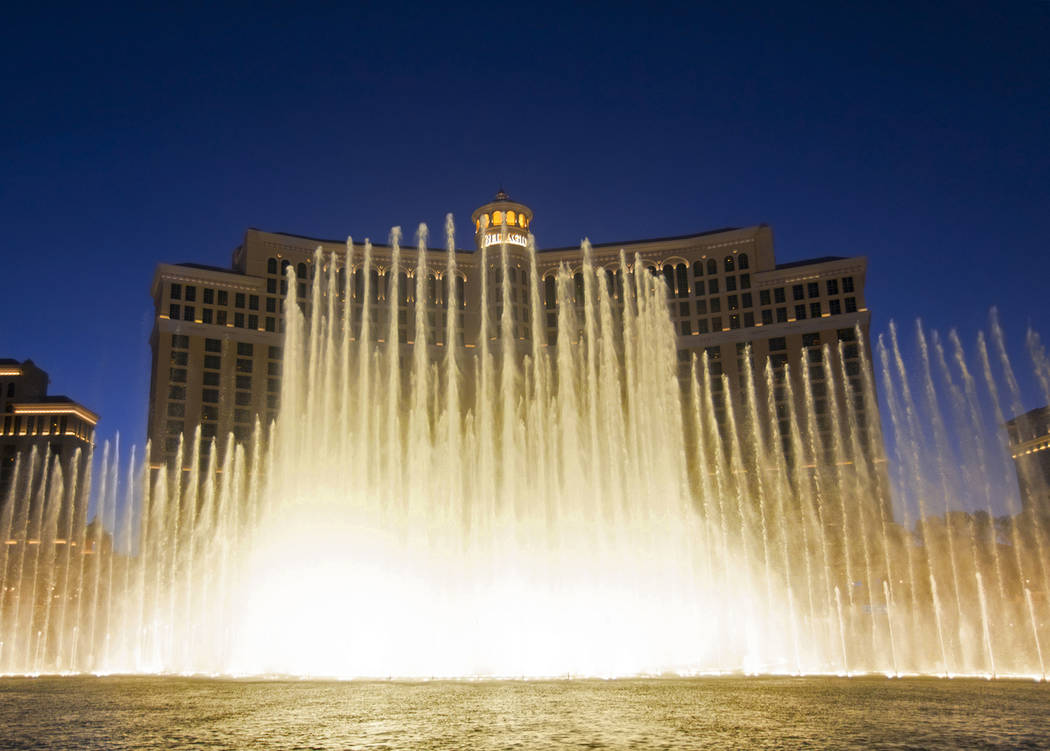 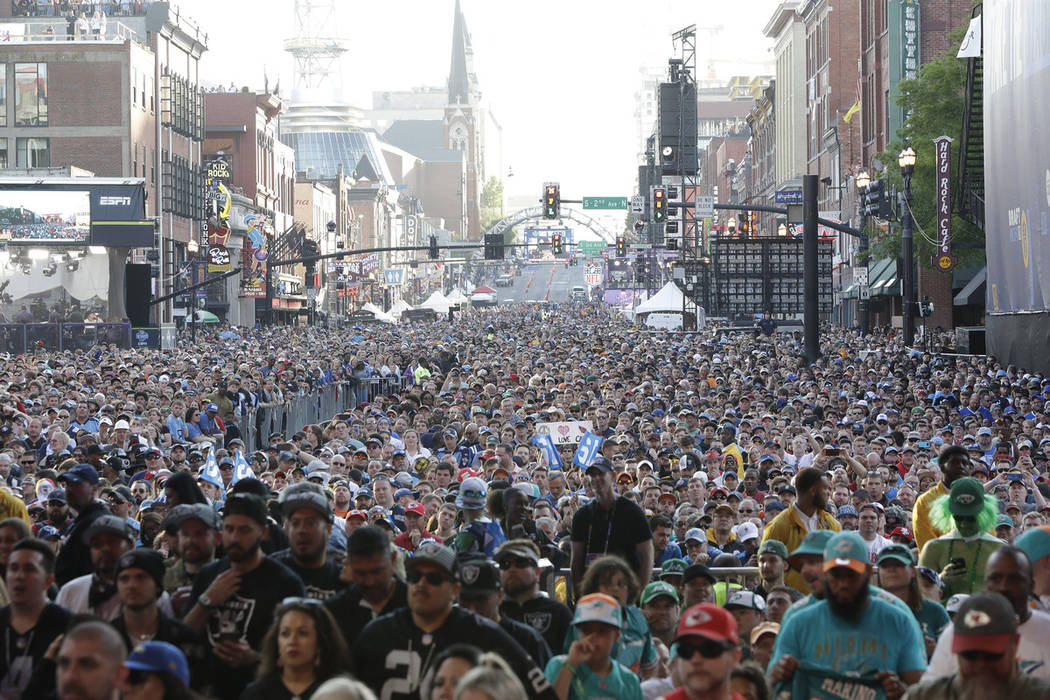 Fans stand near the main stage ahead of the second round of the NFL football draft, Friday, April 26, 2019, in Nashville, Tenn. (AP Photo/Mark Humphrey)

Announcing draft picks from a stage built over the Fountains of Bellagio to a mass of fans packed onto the Strip is part of the “dream scenario” for organizers plotting the 2020 NFL draft in Las Vegas in April.

Almost 1,500 pages of documents obtained by the Las Vegas Review-Journal revealed the possible plans for what has become a highly anticipated annual event — and one that cities eagerly compete for the opportunity to host. This year’s NFL draft was held in Nashville, where the stage was located outdoors on one of the city’s main drags, and drew an estimated 600,000 fans for the three-day event.

The documents and emails detail what the Las Vegas Convention and Visitors Authority, R&R Partners, the marketing and communications group contracted by the LVCVA, and Oakland Raiders’ brass presented to the NFL in their pitch that landed the 2020 NFL draft. Officials have yet to say where in Las Vegas the draft will be staged, though the pitch outlines several possibilities.

“No decisions (on the location) have been announced yet,” LVCVA President and CEO Steve Hill said this week.

Though a stage over the Bellagio Fountains is considered the ideal situation for the 2020 draft, organizers were skeptical that the dream could turn into a reality.

In an Aug. 2, 2018, email to Lisa Motley, director of sports marketing and special events at the LVCVA, and Rob Dondero, executive vice president of R&R Partners, Raiders Vice President Brandon Doll said the “dream scenario” of shutting down the Strip “would be incredible,” but he’s not getting his hopes up.

Motley agreed, saying “(The) three day shutdown is probably not realistic, unless we could have a rolling shutdown.”

Despite the early skepticism, an email in November from Michelle Mader of R&R Partners to Hill, Dondero and Michon Martin of R&R Partners noted that work was underway to receive permission from Clark County for the Bellagio fountain plan.

Clark County spokesman Dan Kulin said he wasn’t aware of such permission being granted yet.

In a statement, MGM Resorts International, owner of the Bellagio, said: “We can’t confirm anything at this time but certainly would be thrilled with the opportunity to work with the league and the city if the Fountains of Bellagio are selected as a draft venue.”

If the dream scenario falls through, the LVCVA worked with MGM Resorts and Caesars Entertainment to compile six site possibilities to stage rounds 1, 2 and 3 of the draft.

The suggested sites were broken up into Tier 1 and Tier 2 sites, not including the Bellagio option.

■ Tier 1 included the Linq, the Smith Center for the Performing Arts and T-Mobile Arena/Toshiba Plaza/Park Theater.

T-Mobile Arena was pegged as the favored site for Rounds 1, 2 and 3 of the draft.

Of note, the Las Vegas Festival Grounds, site of the Route 91 Harvest festival, was part of the initial Tier 2 list but was removed after the Oct. 1, 2017, mass shooting.

Though the Smith Center was included in the list of possible draft sites, Myron Martin, CEO and president of the performing arts center, said he has yet to have contact with parties involved in the event’s planning.

“The Smith Center would be pleased to host the NFL draft, and I am thrilled to hear that our world-class center might be under consideration,” Martin said. “However, we have not heard from the NFL at this point.”

Also included in the pitch were 33 sites and celebrities associated with them that could be incorporated into draft selections. Those include:

■ The Colosseum with Celine Dion and Elton John.

■ Planet Hollywood with the Backstreet Boys, Pitbull or Jennifer Lopez.

■ Cirque du Soleil characters from various properties on the Strip.

Also proposed were unique ways to unveil some draft picks, such as skyjumping from the Strat; behind the scenes of the Bellagio Fountains where water could dance (assuming the draft isn’t staged there); displaying a pick on the Wynn Las Vegas marquee; or having a presenter step out of a High Roller pod at the Linq with a pick.

Regardless of where the event is staged, Las Vegas will need to provide a bevy of hotel rooms to house the small army of people needed to carry out the NFL draft. To that end, tourism officials reached out to representatives at several resort properties to gauge their availability to block off rooms for the draft.

“This should be treated as a citywide block for a convention,” said Chris Meyer, vice president of sales for the LVCVA, in a March 2018 email exchange with Joni Peru, former executive director of sales for the Palms who now works for MGM Resorts.

A spreadsheet prepared by R&R Partners in March 2018 says 7,569 hotel rooms would be needed in varying amounts over about a three-week period, though two days — a Saturday and a Sunday before the draft — were mistakenly left out of the table, according to the emails. Aside from team personnel, staff and vendors, rooms would be needed for NFL media, media executives, legends, prospects, VIPs and more.

The first 10 rooms would be needed for staff, vendors and team personnel 19 days before the draft weekend, according to the report.

Las Vegas also is well equipped to accommodate the mass of fans expected to attend the draft, as the city has 147,238 hotel rooms, according to LVCVA data. In comparison, the Nashville area has an estimated 42,000 room, according to the Tennessean newspaper.

The Nashville draft broke the attendance record for the event, seeing over 600,000 fans during the three-day draft. Expecting similar numbers next year, Las Vegas resorts already have dramatically increased room rates for April 23-25, 2020.

Wynn, Encore, the Palms, the Linq, Bally’s, Flamingo, Harrah’s, Paris Las Vegas, Planet Hollywood Resort, the Cosmopolitan of Las Vegas and some MGM Resorts properties (not specifically mentioned in the emails) would be included among the resorts that would host the people associated with the NFL draft.

As of Monday morning, the average room rate of the host hotels was $425 per night for a standard room for two adults for the three-day draft. The lowest per night rate during the three days is $223 at Bally’s on Thursday when the draft begins, with the most expensive being at Wynn where rates were $699 per night for Thursday, Friday and Saturday of the draft weekend.

To gather intel on the draft’s production, LVCVA officials Rossi Ralenkotter, then CEO, and Hill along with Dondero and Raiders executives attended the 2018 draft in Dallas. Las Vegas officials also attended this year’s draft in Nashville, as Hill mentioned at last month’s Las Vegas Stadium Authority board meeting.

“Nashville did a great job. It was a really nice environment and we’re looking forward to hosting that draft next year and taking it to even greater heights,” said Hill, a stadium authority director. “That planning process is starting now. We’re one of the few cities who had the opportunity to know it would host more than a year in advance. So, not that we need a leg up to put on great events, but having that kind of time in order to do so, I think is going to make that, in combination with everything that the NFL brings to Las Vegas, a pretty spectacular event next April.”

2
Graney: Next GM and head coach of Raiders should share power

5
Who will be the next Raiders GM? Here are 11 possibilities