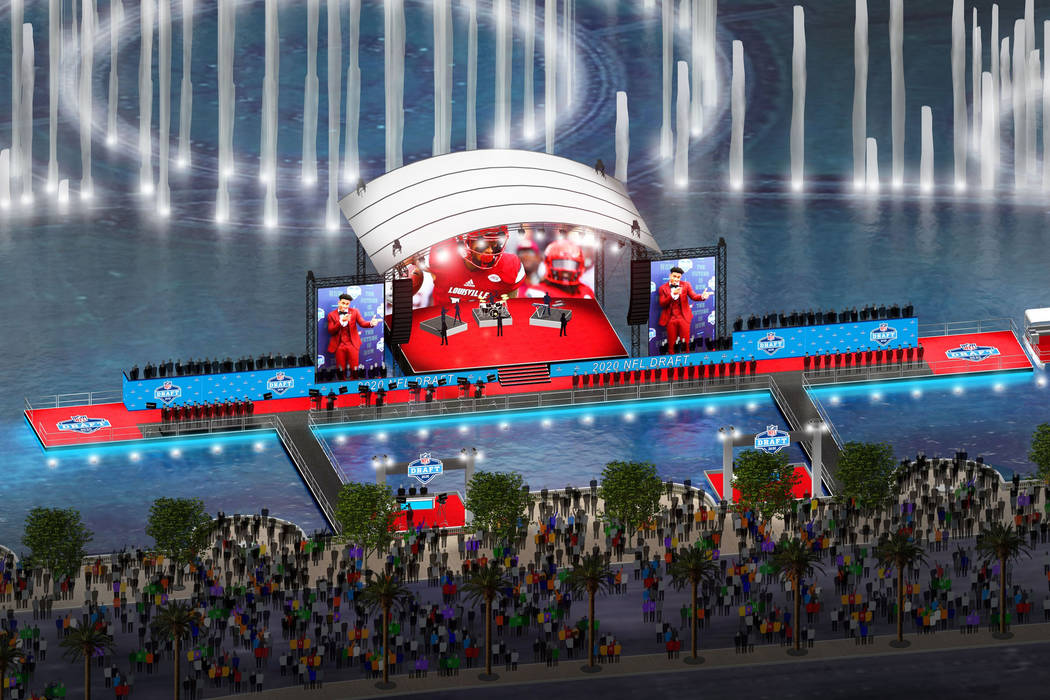 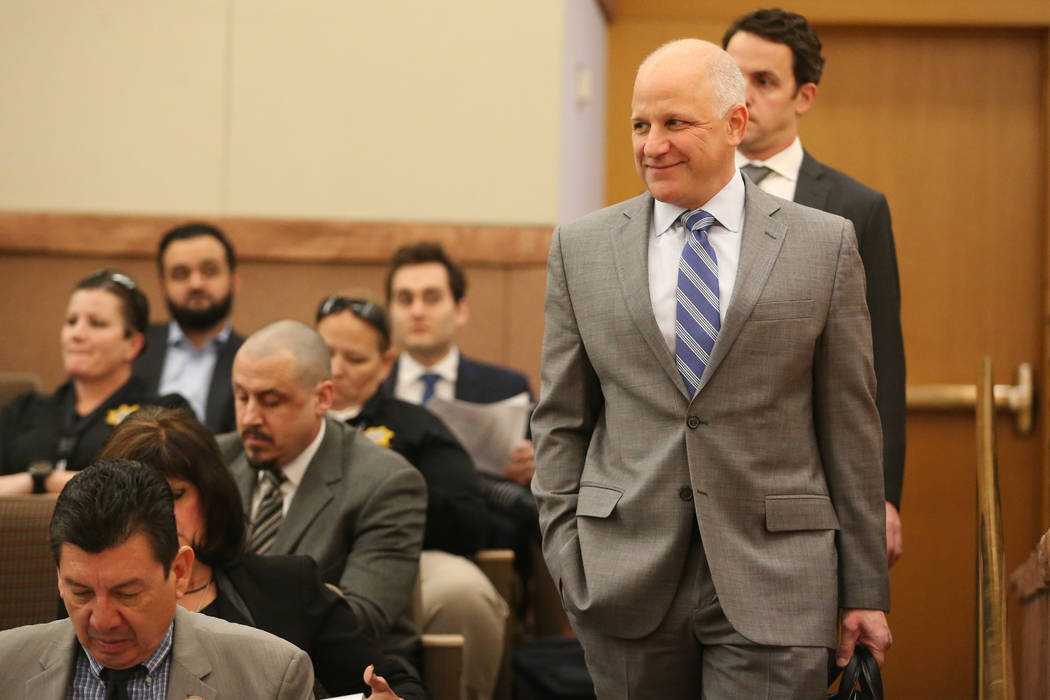 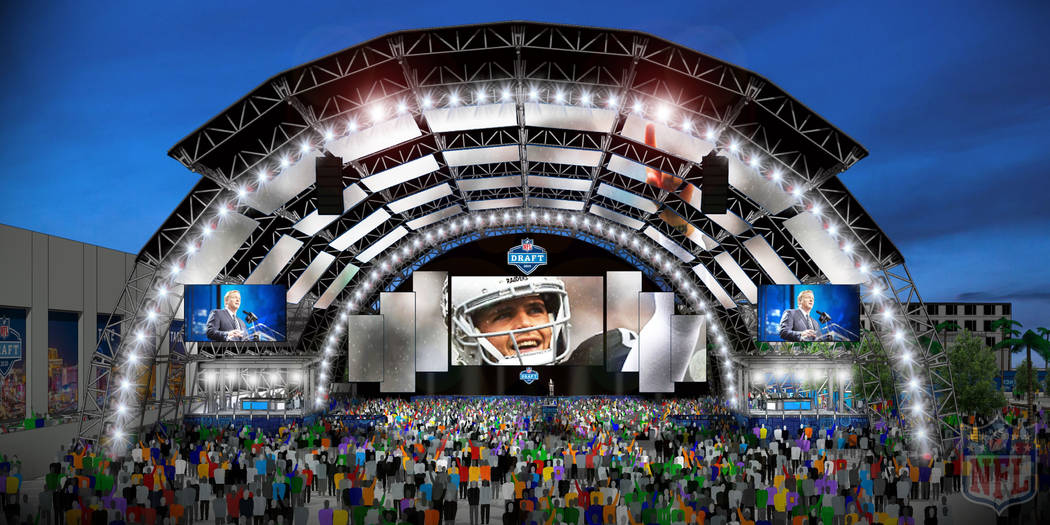 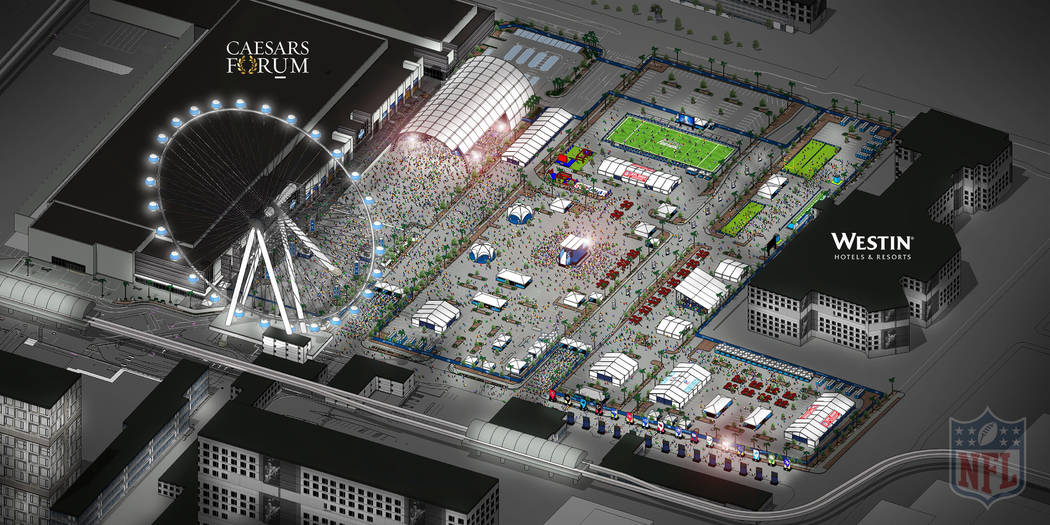 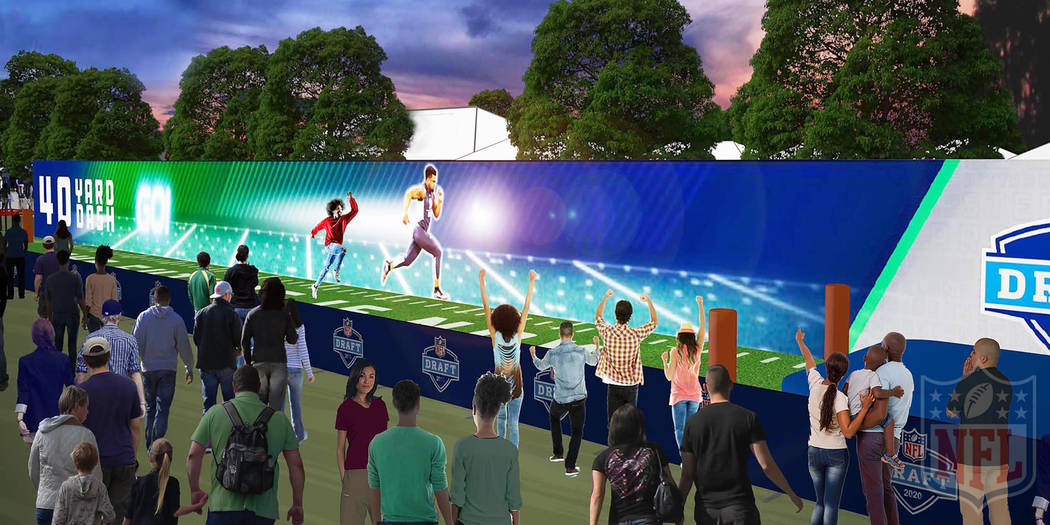 Fans will be able to race digital NFL players alongside a 40-yard long LED wall as part of the fan experience area located between Caesars Forum and the Westin during the NFL Draft in Las Vegas. (NFL) 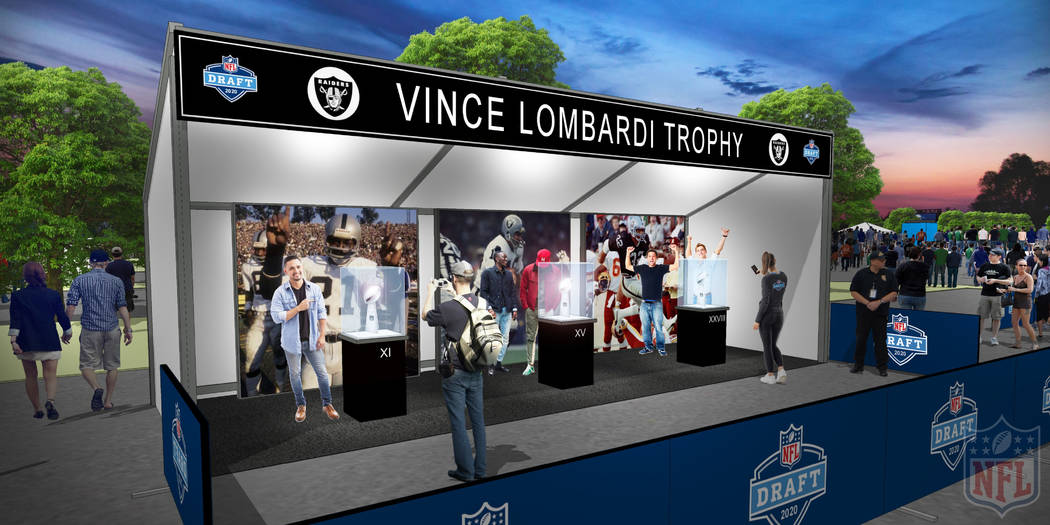 Fans will be able to take their photo with the three Super Bowl trophies that the Raiders have won as part of the fan experience area located between Caesars Forum and the Westin during the NFL Draft in Las Vegas. (NFL) 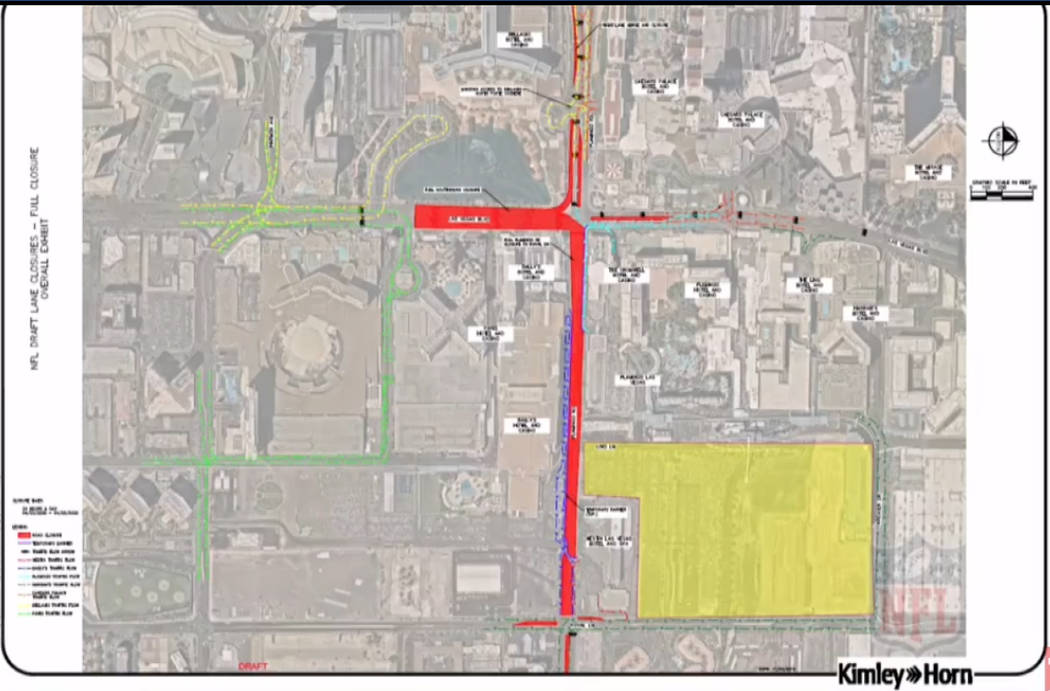 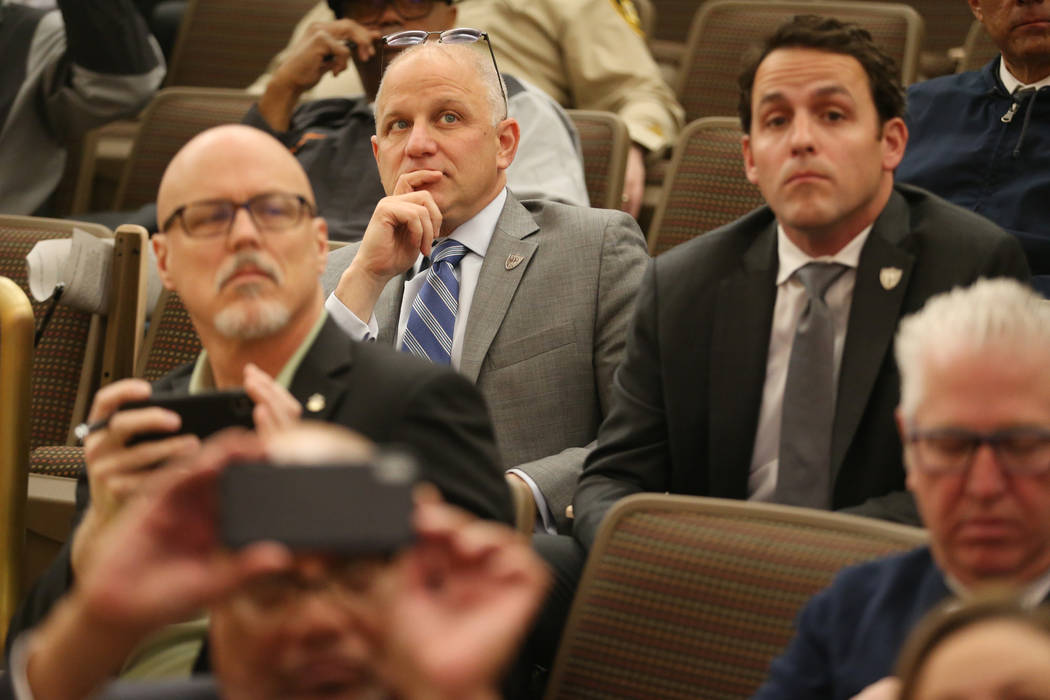 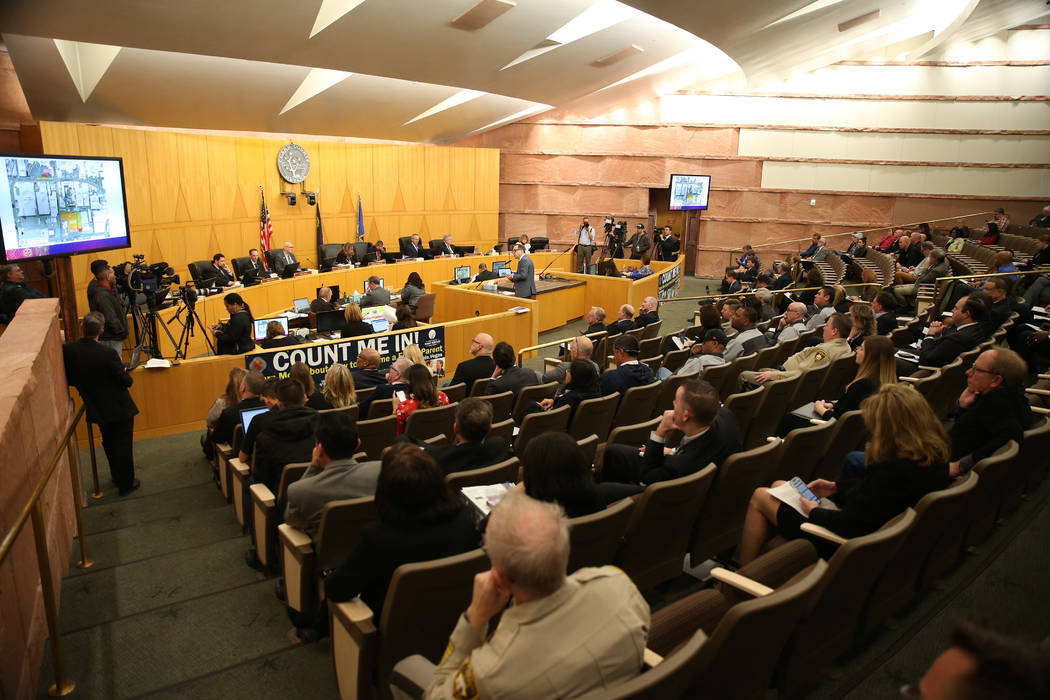 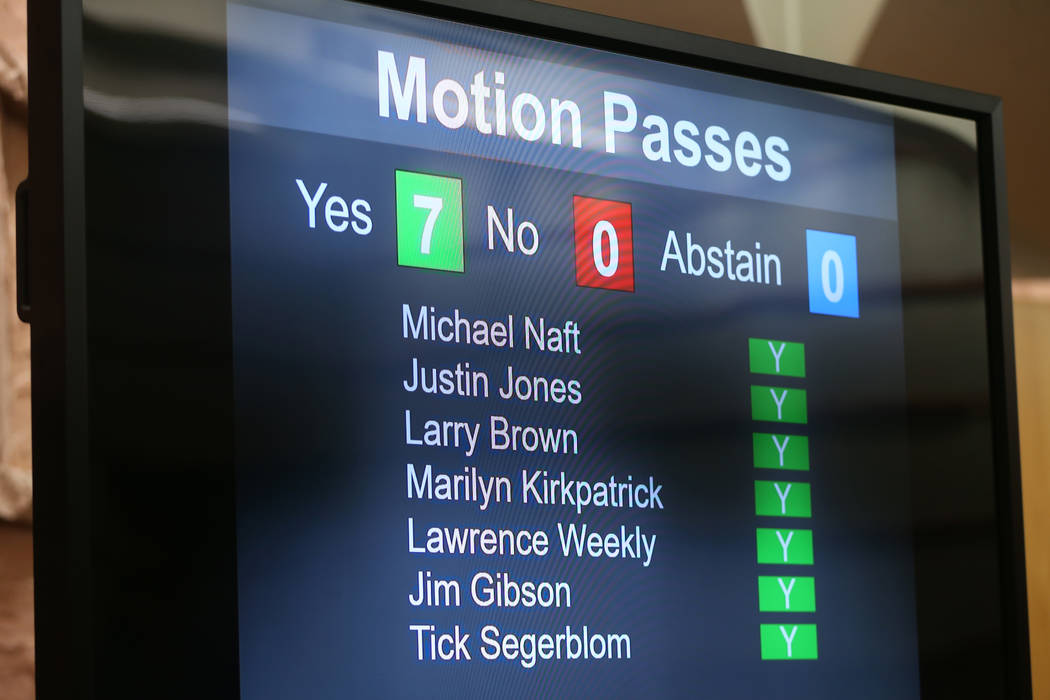 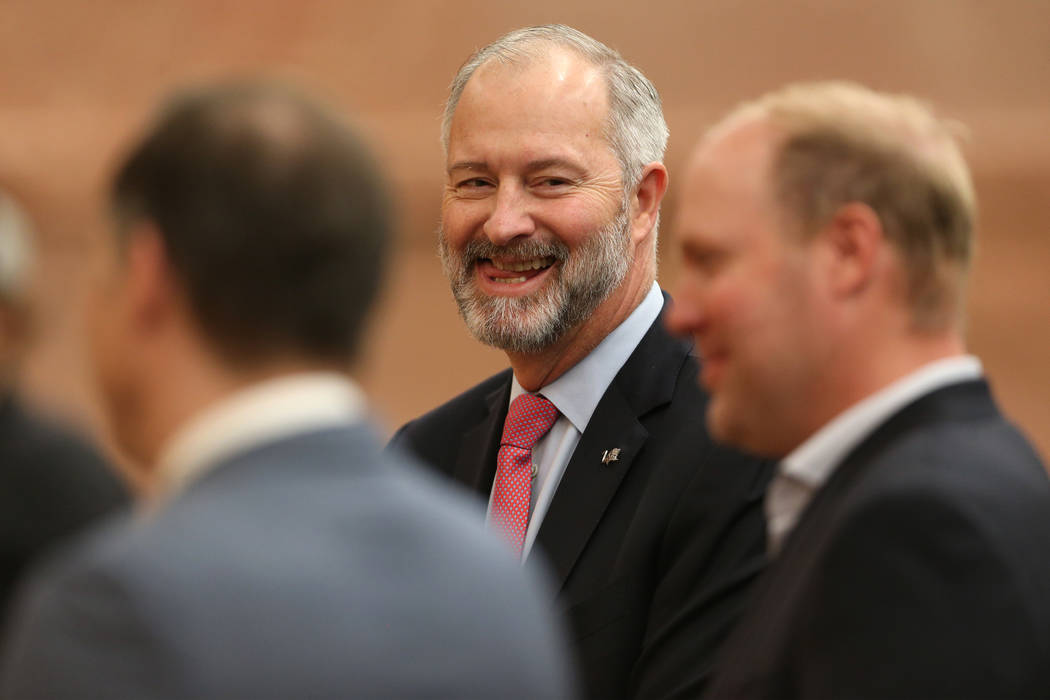 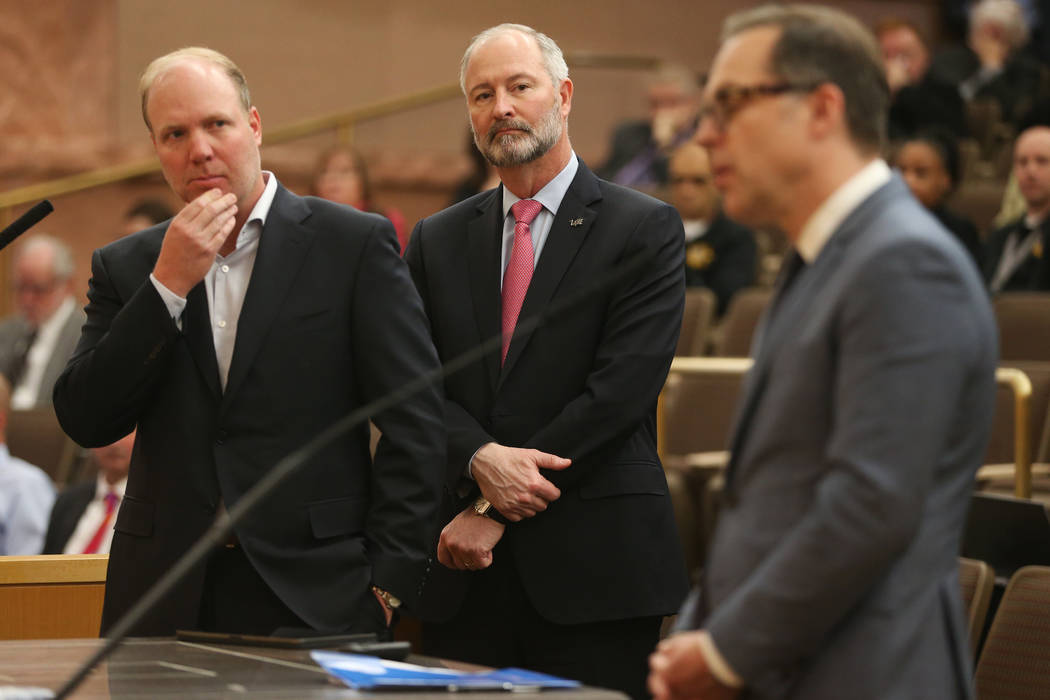 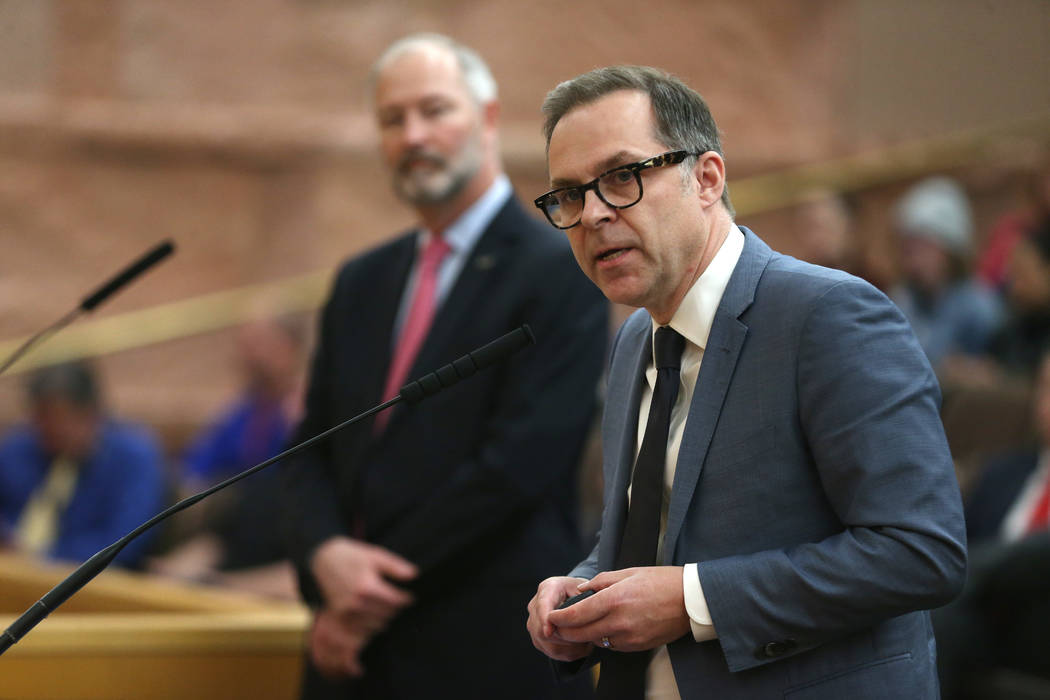 The next batch of NFL stars will be showcased on the Fountains of Bellagio before being whisked away to the Caesars Forum convention center to hear their names called in the 2020 NFL draft in what is expected to be one of the biggest events in Las Vegas history.

In a presentation Tuesday to the Clark County Commission, NFL and Las Vegas Convention and Visitors Authority officials laid out plans for the three-day event scheduled for April 23-25, including multiple road closures over multiple days.

The commission approved the plan, which was the culmination of 14 months of work, by a 7-0 vote.

“This will be one of the biggest events Las Vegas has ever seen,” said County Commissioner Michael Naft. “We want to make sure that it’s produced (in a way) that’s beneficial to our local community, in addition to the hundreds of thousands of visitors that will come for the draft.”

The approval was contingent on the NFL continuing to communicate plans for parking, transportation and volunteers to the county.

Jon Barker, head of live event operations and productions for the NFL, said the red carpet stage will be constructed over the fountains, with players and their families ferried by boat to and from the stage. The draft’s main stage and the Draft Experience — a free, three-day football festival — will be outside the Caesars Forum.

While the plans will be refined over the next three months, the Bellagio stage will serve as a red carpet introduction to the draft prospects, who will then be transported down Flamingo Road to the Draft Experience via open-air vehicles.

“Flamingo is very important to us,” Barker said. “It will serve as the artery of the draft. This is what connects the Strip to where our experience and our draft main theater will be.”

The Draft Experience will feature football-themed games and activities aimed at youth and will showcase the Raiders’ Vince Lombardi trophies from their three Super Bowl wins.

The Raiders will be routinely featured during the three-day draft, which is customary for the host team but is especially key this time, since the Raiders will kick off their tenure in Las Vegas a few months later.

“It is an NFL event and we are the host city, so you will see a lot of the Raiders’ presence,” said team president Marc Badain. “We have a number of events planned around the city. You talk about that backdrop, it’s pretty surreal to see Las Vegas, the Raiders and the NFL draft all together. It will be a good moment for this organization and for this community.”

Road closures will affect traffic around Flamingo and Las Vegas Boulevard for 24 days, with setup and teardown for the draft taking place in three phases, according to Ben Blocker of C3 Presents, which works with the NFL on event production and planning.

April 8 will be the first day of construction on the Bellagio stage. The two inside lanes of Las Vegas Boulevard in front of the resort will be closed to accommodate the work, and a third lane could be closed at times.

An arch spanning Flamingo at Las Vegas Boulevard will be constructed during the second phase, Blocker said. That work originally was scheduled to take six days but has been reduced to 46 hours. Flamingo will be closed April 13-15 from Las Vegas Boulevard to Koval Lane for a total of 46 hours for that process.

“This (Flamingo) is also the front door of our draft,” Barker said. “We will build a structure that will span across Flamingo at Las Vegas Boulevard and be the welcoming and opening door to what connects the Strip to (where) the experience and theater will be.”

The final stage will include the days of the draft. Starting at 10 p.m. on April 22, all northbound and southbound lanes on Las Vegas Boulevard will be closed from Flamingo to the Paris entry. All lanes on Flamingo will be closed from Koval to Las Vegas Boulevard. Traffic will be detoured at Harmon Avenue with traffic messaging signs running from Tropicana Avenue to Spring Mountain Road.

Built into the plans are ways for employees to get to and from resorts, including Paris Las Vegas, Bellagio, Bally’s, The Cromwell, The Linq Hotel and Flamingo. Entrances to the resorts will remain open through the entire setup and teardown process.

Plans include creating a lane opening on Flamingo so that westbound traffic exiting The Cromwell and Flamingo will be taken back to Las Vegas Boulevard and turn right at Flamingo, Blocker said. There will also be a dedicated protected lane running from Bally’s down Flamingo to Koval.

Flamingo will be closed another 24 hours April 25-26 to take the arch down. Traffic restrictions will be lifted May 1, when the NFL will be done tearing down the Bellagio stage.

A park-and-ride program from the Las Vegas Convention Center and the Las Vegas Monorail will be key to shuttling attendees in and out of the draft areas.

LVCVA CEO Steve Hill said the draft will serve as a precursor to hosting other large-scale events in Las Vegas as Allegiant Stadium comes on board. Las Vegas has hosted large events before, and Hill sees this as just another one of those.

“I think what’s going to happen in Las Vegas in this new era of having a stadium that can host 65,000 people and major events and professional sports leagues,” he said. “We need to get good at this. We are great at this. There is no city that is better at putting on huge events than Las Vegas. This one is going to be big. There’s no question about it.”