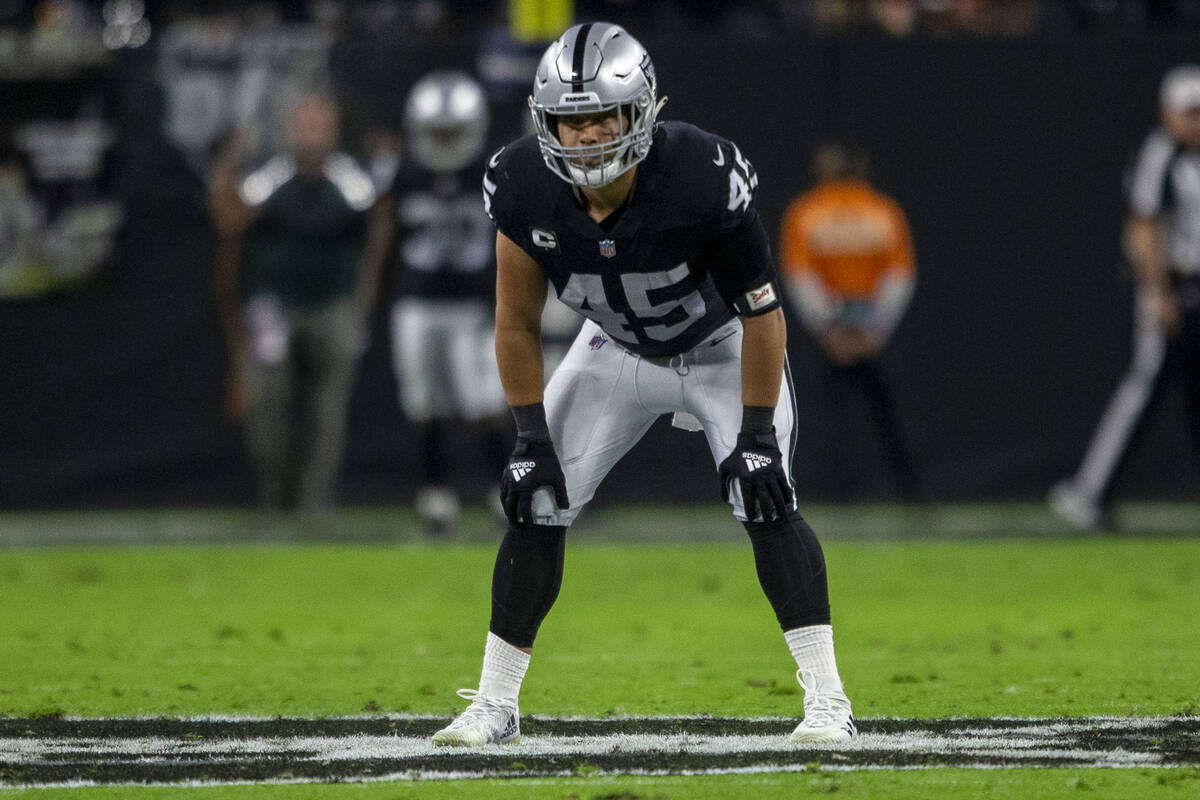 Raiders fullback Alec Ingold (45) on the field before a kickoff during the first quarter of an NFL football game against the Kansas City Chiefs on Sunday, Nov. 14, 2021, at Allegiant Stadium in Las Vegas. (Heidi Fang/Las Vegas Review-Journal) @HeidiFang 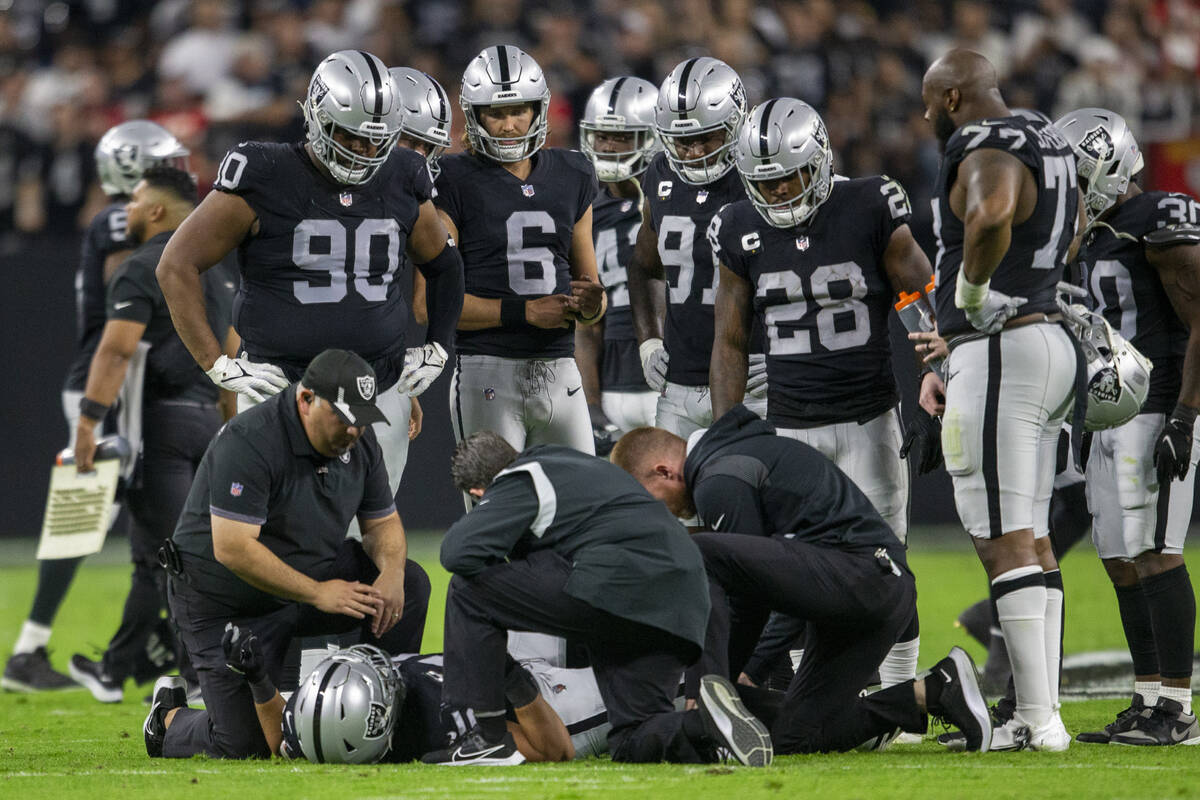 Raiders fullback Alec Ingold (45) is looked at by trainers as his teammates look on after being hurt on a special teams play during the first quarter of an NFL football game against the Kansas City Chiefs on Sunday, Nov. 14, 2021, at Allegiant Stadium in Las Vegas. (Heidi Fang/Las Vegas Review-Journal) @HeidiFang

Losing your head coach in the middle of the season sucks.

Losing a superstar teammate in a tragedy sucks.

Watching your guys lose five of the next six games from the couch sucks.

You know what doesn’t suck?

Being a fullback for the Las Vegas Raiders.

Moving across the country to the desert hasn’t been easy for any of us. Some of the guys moved out to Henderson, some in Summerlin, but we’ve all felt welcome. Sure, our jerseys aren’t up in the stores like the Golden Knights. And we sure don’t have as many license plates driving around town either. But I think we’re just getting to know each other, you know?

It’s only been one year since y’all have been in the stadium and seen us for real, so I get that there’s some getting used to. Let me formally introduce us … we have some catching up to do.

The 2021 Raiders have been a team of adversity and tragedy, no doubt about that. Our head coach was forced to resign after an email scandal and the first pick of our 2020 draft class was in a fatal car accident. There’s been headline after headline about mistakes made by the guys in silver and black this season.

Let me shed some light on guys you can cheer for this Sunday.

We have a quarterback who is in the middle of trade rumors every time he throws an interception, just to follow it up with a game-winning drive on his way to being statistically the best to do it for the Raiders.

We have a wide receiver who gets made fun of for looking like your high school football coach, only to end up snatching the ankles of your favorite DB every single Sunday.

We have a defensive lineman with a nationwide mental health initiative who happens to be an absolute baller on the field.

We have two team captains now publicly sober after dealing with their own rock bottoms and using their platforms for the greater good of the community.

We have a Pro Bowl punter, who started his career as a tryout, and an Ice Man of a kicker, who was cut a few years ago who now make up one of the best special teams units in the entire league.

The list is endless. We’re a bunch of underdogs. A bunch of guys with chips on our shoulders. A team that’s grown together as something more than just the sum of its parts. We’ve gotten better together through all of the adversity of 2021.

So why is some fullback on IR writing this open letter? I just have a few things to get off my chest before seeing my guys strap it up one last time in Allegiant Stadium this season.

I want to let you know that being a captain of the 2021 Las Vegas Raiders has been the biggest honor of my life. That’s no exaggeration. This group of men trusted me to lead and to represent them with a C on my chest. That’s been the worst part about having a season-ending injury. I can’t see the job through to the end on Sundays. But I’ll be damned if I can’t show up every day to 1475 Raiders Way and do my part.

I love going to work. We all do. It’s a weird dynamic, and this season has had its fair share of tragedy, but something is different when you get inside that building. The outside noise just seems to hit mute when we’re in there. Most of the time.

When we were 3-0 and on top of the world, all of the pats on the back stopped at the door.

When we lost Coach Gruden to the WFT email scandal, there were about a million texts and calls that seemingly went silent at work.

When we were sitting at 5-2 at the bye week, everyone showed up ready to work just as hard as week 1.

Then Ruggs got into the accident. Thoughts and prayers to everyone involved. To the young woman who lost her life and to her family. That was bone-shattering to this community. As a team we lost a brother, a good man who made a terrible mistake. Losing Ruggs was bigger than football. It wasn’t about the plays we were going to miss on the field, it was about the loss of a life. It was the great future we all had a hand in impacting on a daily basis that we couldn’t be there for in the same way anymore. How in the hell are you supposed to play football after that?

We go on to lose five of the next six games.

There are no excuses, that’s just the reality of the situation. Momentum works a couple of ways and we let some bad momentum hit us hard. A number of guys went down with injuries, COVID ran through the building, and unfortunate turnovers and mental mistakes came up on Sundays. We couldn’t seem to stop the bleeding. But nobody stopped working.

The losses felt bad, there was even a guy outside of 1475 Raiders Way with a bag over his head and a sign letting us know “Raiders fans deserve better.” I tell you what, that guy was close to the building … but he wasn’t inside. There was a sense of fight and urgency every day in that facility. It might have seemed terrible on the outside, but on the inside we were still on the details every day. For some reason it just wasn’t clicking the way it used to.

I feel like everyone is expecting some come to Jesus moment, or some magical speech that saved the season. But it didn’t work like that. Nothing magical happened at 1475 Raiders Way. Guys just showed up and worked. We never stopped working. Roles changed, players stepped up, coaches held the line, and we all held one another to a standard day in and day out. We were given a choice heading into the last four weeks to either grab the rope or let go. Every game from here on out was essentially a playoff game.

The boys at 1475 Raiders Way grabbed the rope.

I’ve been watching and learning a lot during rehab. I’ve watched teammates make Pro Bowls, Maxx Crosby turn into a superstar, Zay Jones make plays week in and week out, a young offensive line develop and find an identity, Josh Jacobs battle through some ribs (something I’m way too familiar with), the entire defense shut down opponents from kickoff until triple overtime, my guys have won essentially three straight playoff games. I’ve watched this team, one by one, grab the rope.

It’s been a wild 2021 season full of tragedy and adversity outside of 1475 Raiders Way. But inside, it’s been filled with accountability, discipline and relentless effort. The details haven’t slipped and the standard remained the standard. There was no pointing fingers, only looking in mirrors. There’s been supreme ownership of all of our successes and failures. Every win and every loss, and humility to always improve.

We have one more game coming up this Sunday night. One last opportunity guaranteed. It’s going to be a good one. All of Vegas will be there for it. The game won’t be won by a single superstar making a play that’s never been made before. Raider Nation knows it will probably come down to a last-minute scenario with all of us watching stressed beyond belief. No matter how this game ends on Sunday, I know one thing is for sure, the guys will fight relentlessly til the bitter end for one another.

All of that to say this. We need you Raider Nation, we need you Las Vegas. We’ve been through a lot, but we’ve got one more game to win, and it’s all hands on deck. It doesn’t matter if you’re watching in Henderson or Lake Las Vegas, downtown Summerlin or North Vegas, we need all of you.

Al Davis said, “The greatness of the Raiders lies in their future.”

The future of the Raiders starts now.