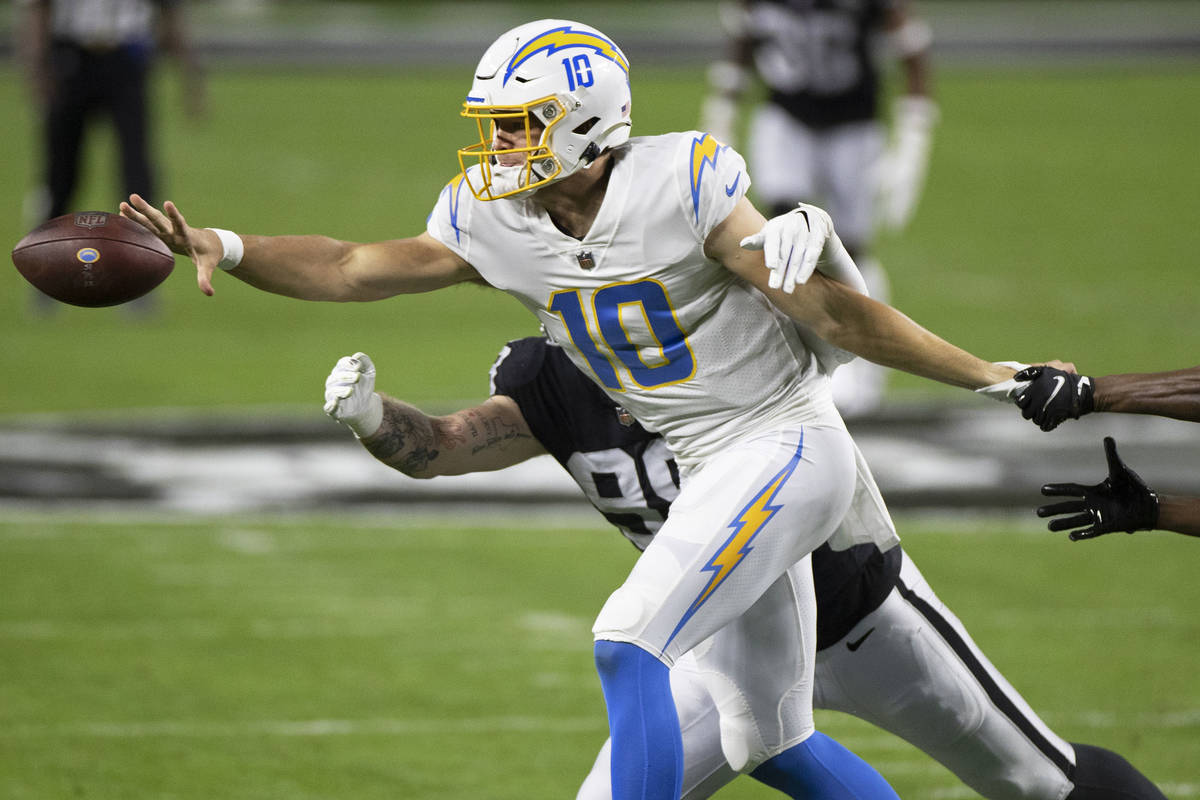 So it was “a pretty cool opportunity,” Herbert said, to play against Mariota on Thursday night at Allegiant Stadium.

Even cooler to beat him.

Herbert outplayed Mariota, securing a 30-27 overtime victory on a quarterback sneak to earn the adulation of his teammates in the end zone afterward. The wunderkind rookie and Oregon alum was outstanding, completing 22 of 32 passes for 314 yards and two touchdowns while adding the game-winning rushing score to snap his team’s nine-game losing streak against divisional opponents.

He’ll have games against the Broncos and Chiefs to break the tie and establish a new mark.

“I’m excited to see him every week, just like ya’ll,” said Chargers cornerback Chris Harris Jr., who had a key interception late in the fourth quarter. “He’s adjusting to the time. In November, December, the NFL game is different. Guys start locking in a little bit more, getting ready for the playoffs. Everything gets tighter. He’s pushing through that, and that’s what you want to see from a rookie quarterback.”

Herbert is in the midst of one of the great rookie seasons in NFL history. His rocket arm, poise and mobility have captivated the league at times during the Chargers’ 5-9 season. But he’s been on the losing end of four one-score games and certainly didn’t want to lose another — especially after the way his first game against the Raiders ended. He threw consecutive incompletions in the end zone in that game as time expired in a 31-26 loss.

He was sharp on Thursday, though, capping Los Angeles’ first drive with a 10-yard TD pass to tight end Hunter Henry. He added a 26-yard scoring pass to Tyron Johnson in the final minute of the first half.

“He’s doing it with young receivers on the field, spreading the ball,” Chargers coach Anthony Lynn said. “He’s doing everything he has to do to keep plays alive and extend plays. … He has the legs and the athletic ability to run it, but I like it when he gets the ball to our receivers down the field.”

The scoring slowed in the second half, though, amid some peculiar play-calling. He threw only one pass in the fourth quarter as Mariota helped propel the Raiders to overtime. He watched the first 6:42 of overtime, too, after the Chargers lost the coin toss.

Mariota drove the Raiders into position for a field goal that gave them a 27-24 lead. Herbert responded by leading the game-winning drive. He completed a 53-yard pass to Jalen Guyton to set up a goal-to-go opportunity and scored with the sneak three plays later. He exchanged salutations afterward with Mariota, who played at Oregon from 2012 to 2014.

A perfect ending to a near perfect performance.

“I could look at all of the things he was able to do at Oregon, how athletic and how mobile he was and how accurate he was. … It was everything I ever wanted to do,” Herbert said. ““It’s just been an awesome experience to be out here and to play against him, one of my heroes. … It was a really cool experience.”