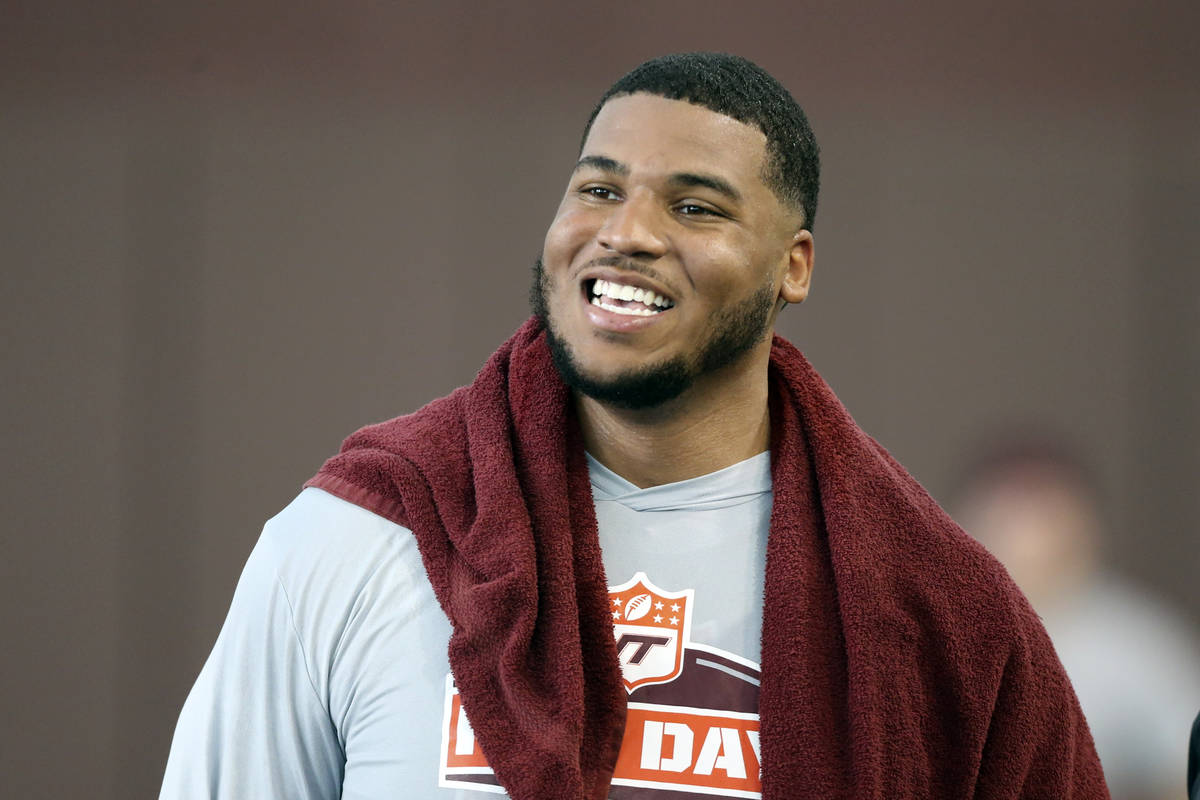 Christian Darrisaw smiles after completing a set of offensive line drills during Virginia Tech Pro Day in Blacksburg, Va., in this Friday, March 26, 2021, file photo. Darrisaw is a possible first round pick in the NFL Draft, April 29-May 1, 2021, in Cleveland. (AP Photo/Matt Gentry, File) 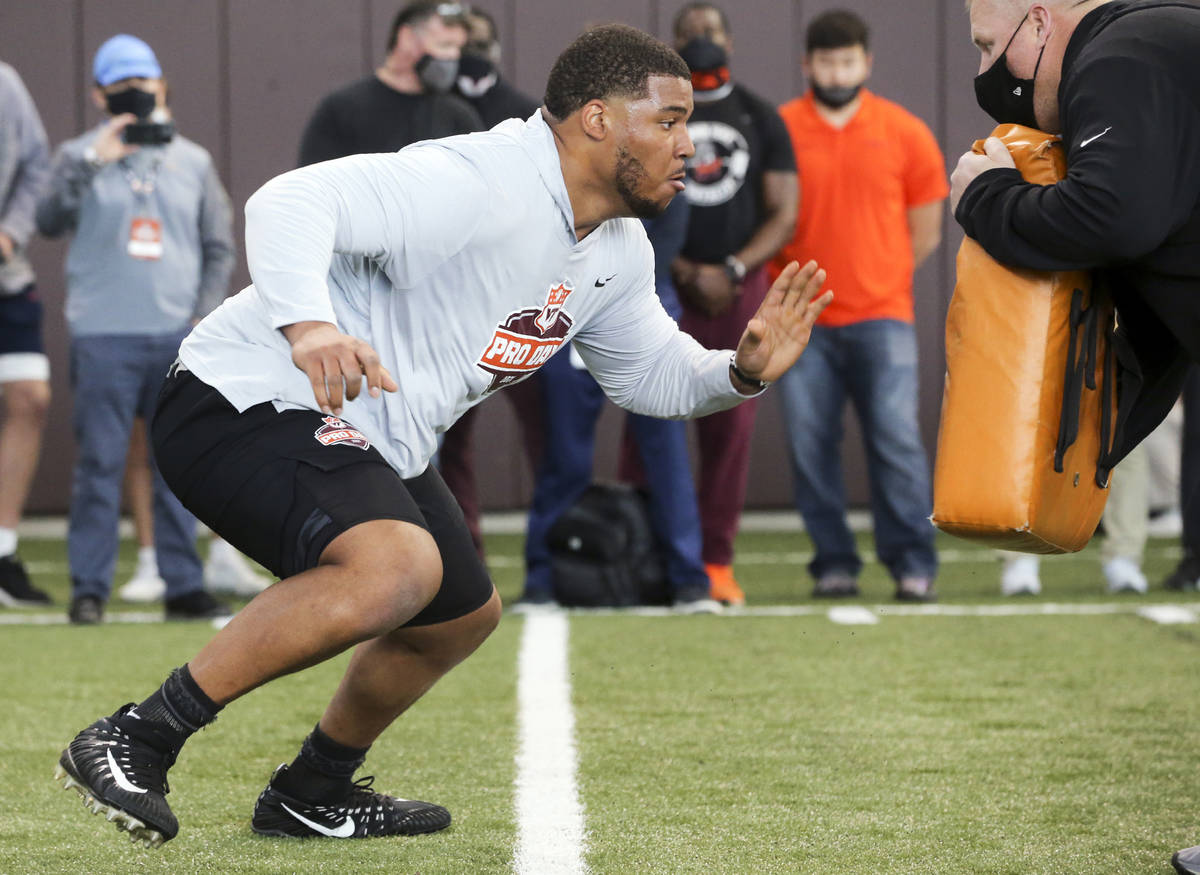 The NFL draft begins Thursday, and there is little consensus on what the Raiders might do with the 17th pick of the first round.

Mock drafts are all over the place, and little information is coming out of the team’s Henderson facility.

So it should come as no surprise there is no favorite on the betting board. The Westgate sportsbook posted odds Monday on which player would be the Raiders’ first selection and eight players were all listed at 12-1.

Ed Salmons, the vice president of risk for the Westgate, cited several reasons there is no clear betting favorite. The Raiders are candidates to trade either up or down in the first round, and they have several needs. Plus, the combination of coach Jon Gruden and general manager Mike Mayock have shown they are willing to make selections that don’t line up with conventional thinking.

“The Raiders sometimes will make picks out of nowhere,” Salmons said of the odds. “Anything is in play with them.”

There is some conventional wisdom that their first pick will be an offensive tackle, as the team looks to rebuild the line after parting ways with three accomplished veterans in the offseason.

Tackles Christian Darrisaw, Alijah Vera-Tucker, Dillon Radunz and Teven Jenkins are part of the group at +1,200.

Mayock said last week he would only want to select for a specific hole on the roster if the player also provided value at that particular spot in the draft.

“We’re very aware of our needs,” he said. “Obviously when the needs fit up with where you are on the draft board, that’s awesome. When they don’t, you have to be a little careful.”

Linebacker Micah Parsons, a potential top-10 pick with maturity concerns, is another of the co-favorites. The Raiders could take a chance on him should he slip to No. 17. Another linebacker, Jeremiah Owusu-Koramoah, is also in the group at 12-1.

It’s rounded out by edge rusher Kwity Paye and interior defensive lineman Christian Barmore. Safety Trevon Moehrig, who often has been listed for the Raiders in mock drafts and would fill a position of need in Gus Bradley’s defense, is not listed among the 23 possible picks.

Salmons said he doesn’t think the pick makes sense so early in the draft.

“I would think it has to be tackle or some kind of defensive line help,” he said. “The safety, you just go sign a guy. I wouldn’t waste a first-round pick on a safety.”

Keep in mind the bet applies to the Raiders’ first pick, not necessarily at No. 17.

Quarterbacks Trey Lance and Justin Fields are both listed at 30-1, which probably would require trading up.

Free agent Carson Williams signed with the Raiders on Monday.

The 6-foot-5-inch, 240-pound tight end was a basketball player at Northern Kentucky and Western Kentucky after a high school career that saw him finish as the No. 5 rebounder in Kentucky prep history.

Williams is trying to follow in the footsteps of New York Jets right tackle George Fant, who also made the switch to football after a basketball career at Western Kentucky. Williams said Fant has been advising him throughout the process.

Keeping up with Jones

Longtime NFL writer Peter King included the Raiders on a list of teams that could be interested in the 32-year-old, along with the Tennessee Titans, Baltimore Ravens and New England Patriots.

Any deal involving Jones could be agreed on at anytime, but is unlikely to take effect until after June 1 when the potential dead cap hit for Atlanta could be pushed back.