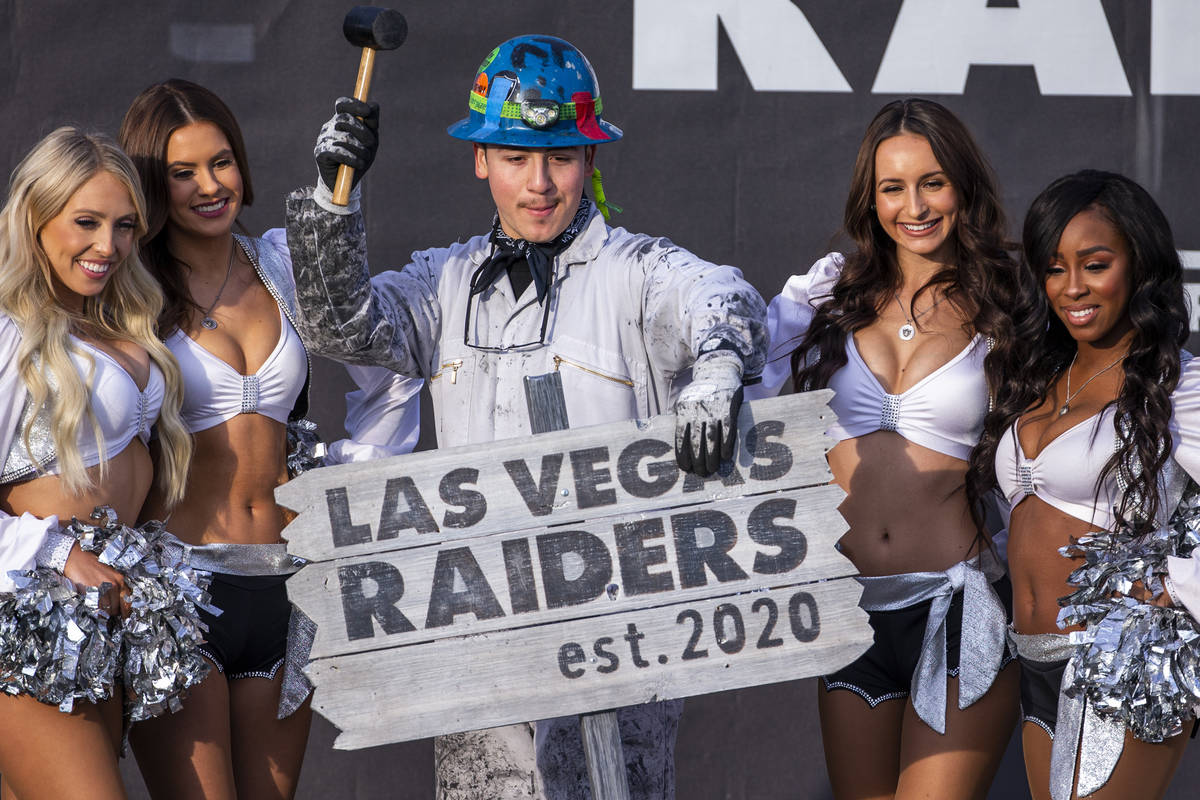 Painter Angel Ayala poses with a hammer between the Raiderettes during the official announcement ceremony for the the Las Vegas Raiders at Allegiant Stadium on Wednesday, Jan. 22, 2020, in Las Vegas. (L.E. Baskow/Las Vegas Review-Journal) @Left_Eye_Images

The Raiderettes might not have fans at Allegiant Stadium to help cheer on Las Vegas’ new NFL team this season, but they will have a slightly new look.

They will debut new uniforms that are in some ways a tribute to their days in Oakland, California, going back to the higher waist that was unveiled in 1978. Rhinestones also were added to the shorts, sash and vest, a nod to the Raiderettes’ glitzy new city.

“The uniforms occasionally undergo subtle updates,” Raiderettes director Mandy Voecks said. “This is an ideal time to update the uniforms as we embark on our inaugural year in Las Vegas.”

For those wondering why a team would need cheerleaders without fans allowed to attend games, they also take part in community events that promote the Raiders. They have been actively involved in helping whatever community the Raiders play in beginning with the first Raiderettes squad in 1961.

They also have performed overseas for the troops and for Raiders’ international games as well as domestic gigs to further publicize their squad and the team they cheer for on Sundays (and some Mondays and Thursdays). There also is a Junior Raiderettes program for juniors and teenagers interesting in performing alongside the main squad.

The Raiders announced their new team of cheerleaders July 2, a 32-woman squad that includes 15 from Southern Nevada as well as one from Australia and one from Japan. There also are 12 members who cheered last year in Oakland and are relocating.

“They are excited to continue their Raiderette careers and participate in outreach in our new community,” Voecks said.

And they will do that with a new look even if the fans won’t be there. “We always received positive reviews for our updates, which are planned with grace and style but also to uphold our tradition,” Voecks said.