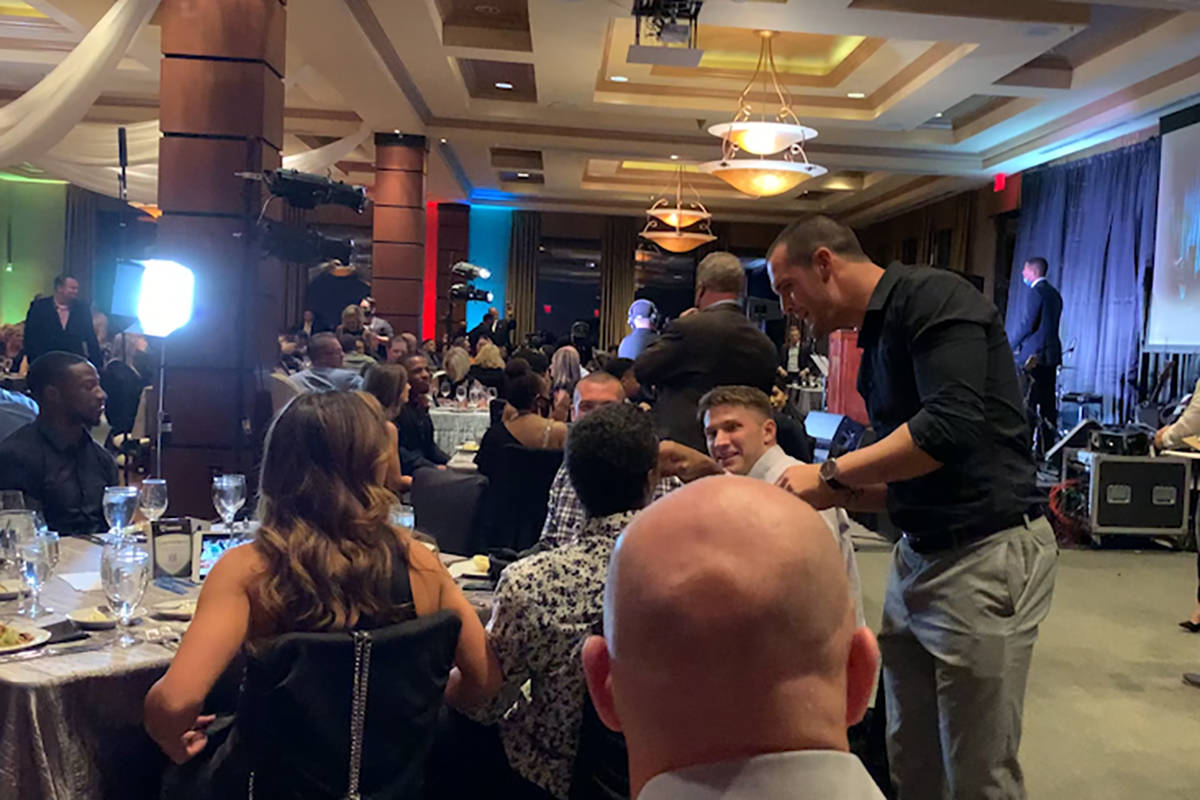 Derek Carr is seen mingling with others without a mask at Darren Waller's foundation event on Monday night. (Cassie Soto/Las Vegas Review-Journal) 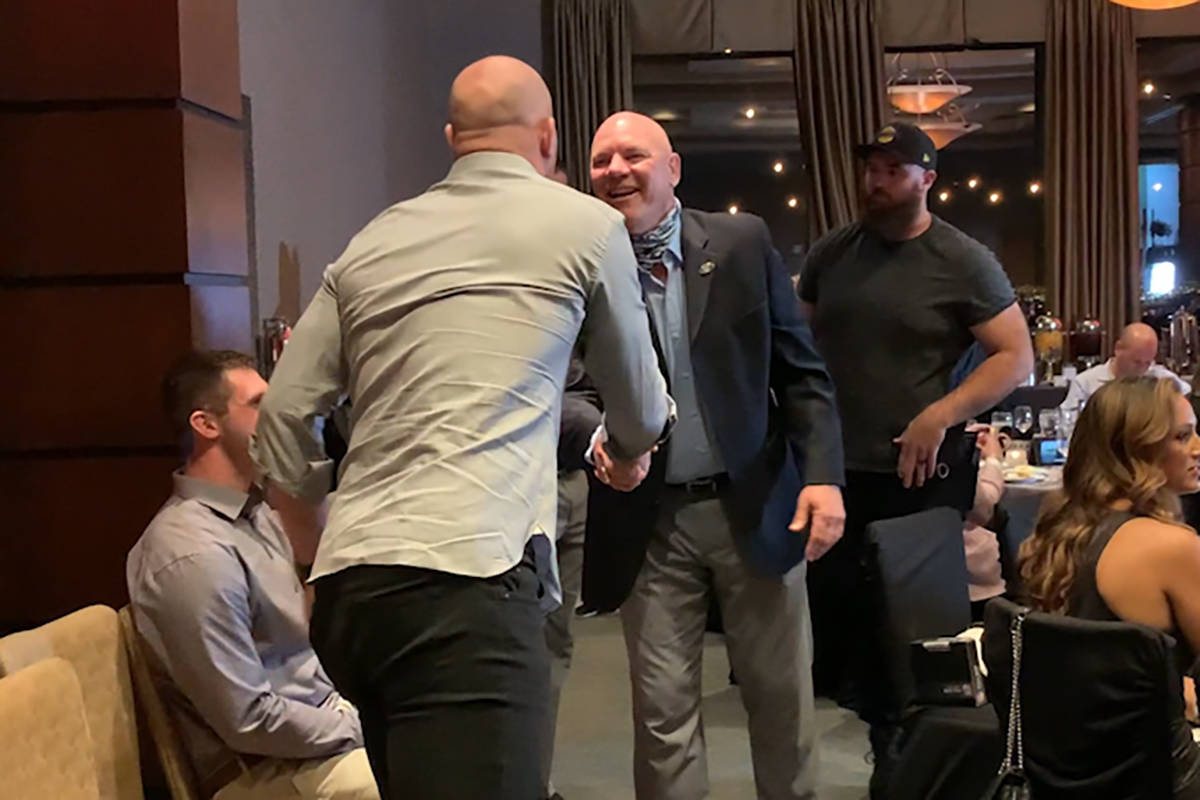 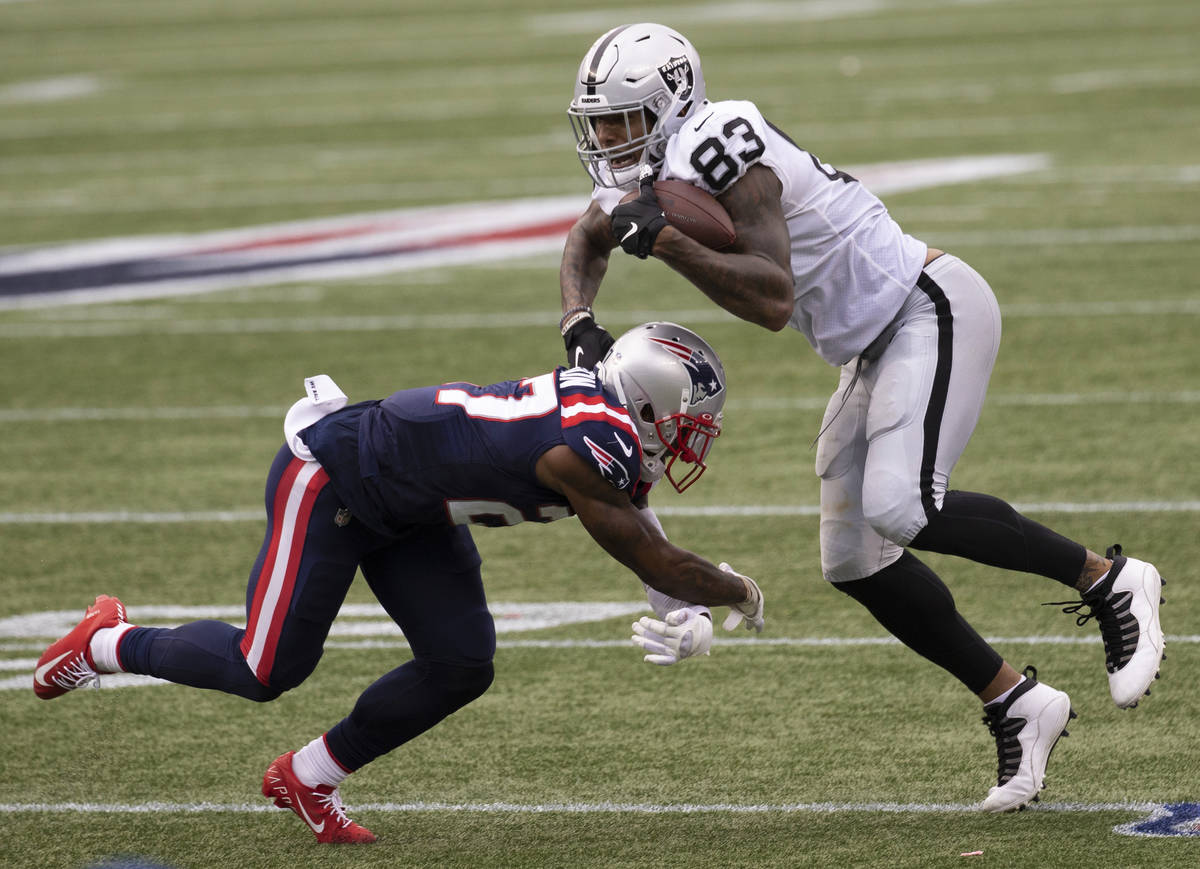 Several teammates of Raiders tight end Darren Waller showed up Monday night at a gala in Henderson to help raise money for his foundation. The only problem was they were not wearing masks, an oversight that may land them in hot water with the NFL.

The event host, the DragonRidge Country Club, already has been fined $2,000 by the city of Henderson for four violations of the state’s COVID-19 emergency directives. The players are waiting to learn their fate for potential violations of similar NFL regulations.

The event drew a crowd of more than 100, according to an attendee, twice the state limit in effect on Monday of no more than 50 for indoor gatherings. Videos from the gala show several maskless Raiders, including quarterback Derek Carr and tight end Jason Witten, interacting with attendees.

While the Raiders did not officially organize or host the event, they did lend some assistance, according to owner Mark Davis, who donated money for the cause but was not in attendance. Davis said the Raiders are looking into the situation internally.

“We obviously take responsibility for this,” Davis said on Tuesday. “You don’t like seeing this. I don’t know that it’s actually been built into our memories that you have to wear a mask. Our organization takes it very seriously.”

Also on Tuesday in Tennessee, a COVID-19 outbreak among three Titans players and five team personnel members forced the NFL to shut down the team’s facility until at least Saturday, putting Sunday’s game against the Pittsburgh Steelers in jeopardy. In addition, the Vikings, who played the Titans on Sunday, have shut down their facility.

The Las Vegas event was in support of Waller’s foundation, which helps young adults addicted to drugs and alcohol.

In one of the videos from the event, Carr and teammates can be seen talking and visiting with attendees without masks. Waller, according to an attendee, was wearing a mask throughout the event, taking it down only to make a few remarks from the head table.

His teammates, including Zay Jones, Nevin Lawson, Foster Moreau, Hunter Renfrow, Derek Carrier and Nathan Peterman, arrived together and were not wearing masks, an attendeesaid.

Moreau, Jones and Carrier sat at the same table, with the other players sitting in a row of chairs. All were socially distanced while seated and had limited interaction with the crowd, the attendee said.

The Nevada Occupational Safety & Health Administration had not received a complaint about the event as of early Tuesday afternoon, agency spokeswoman Teri Williams wrote in an email. Williams did not respond to a request for further comment near close of business Tuesday.

The Southern Nevada Health District is typically not involved in investigating events like the gala unless requested, agency spokeswoman Stephanie Bethel wrote in an email.

“We are disappointed when an organization or an event organizer chooses to disregard state directives related to COVID-19 prevention in our community,” she wrote.

Wednesday morning a person familiar with the situation said the NFL Players Association was discussing the matter with the league. The DragonRidge Country Club and the Darren Waller Foundation have not responded to requests for comment.

It is unclear if the attendees were tested for the coronavirus. According to an attendee, people were allowed in without filling out any COVID-19 questionnaire or getting their temperatures taken.

Now @derekcarrqb is throwing signed footballs into the crowd for $500 a piece. Anything for charity! @darrenwallerfdn #vegas #raiders pic.twitter.com/qoYe5nOqax

Last July, the NFL and the NFL players union laid out a list of forbidden high-risk activities for players and team staff members this year in response to COVID-19 — among them, attending “any gathering or event that violates local and state restrictions.”

Failure to adhere to those mandates could result in fines or suspensions.

Raiders coach Jon Gruden, who recently revealed that he had recovered from the virus, has made dealing with COVID-19 a high priority for his team, often saying he wants to “crush” the virus.

Gruden’s mandate extends beyond the safety measures being taken at the Raiders’ practice facility in Henderson. It is when players leave the building that Gruden wants them to be most focused.

Gruden was fined $100,000 by the NFL for not wearing a mask during the Raiders’ “Monday Night Football” game against the Saints.

The Raiders are also reportedly under investigation for allowing a non-credentialed team employee into their locker room after the game against the Saints, potentially violating league protocol.