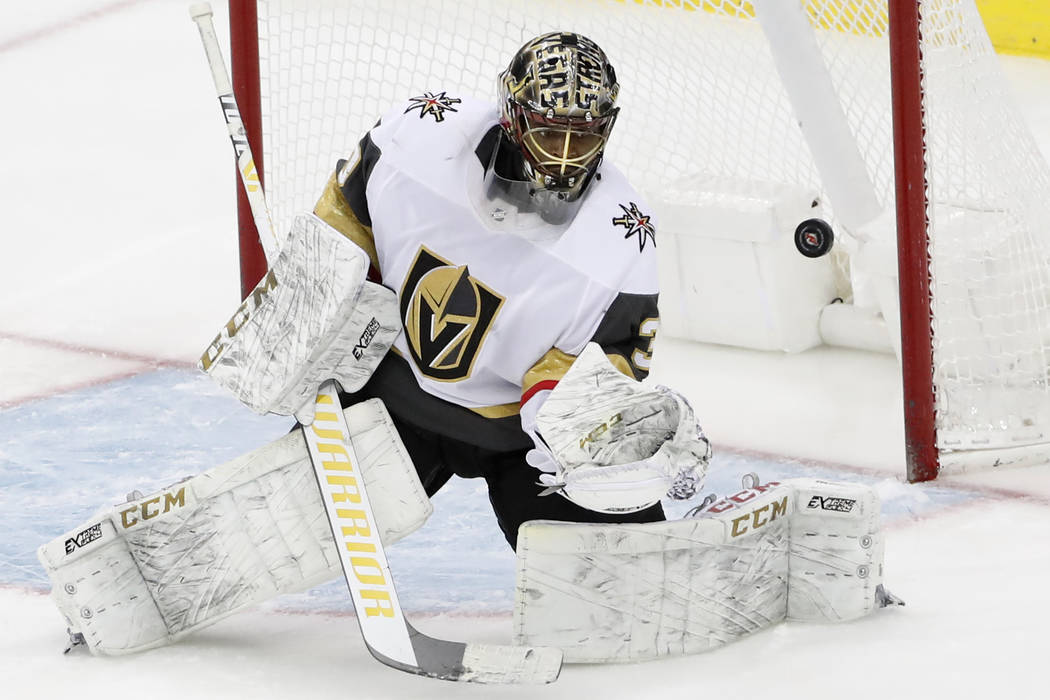 Vegas Golden Knights goaltender Malcolm Subban (30) makes a save as the puck deflects off him during the third period of an NHL hockey game against the New Jersey Devils, Tuesday, Dec. 3, 2019, in Newark, N.J. The Golden Knights defeated the Devils, 4-3. (AP Photo/Kathy Willens)

Trade deadlines in professional sports are about sending messages.

The Golden Knights on Monday offered an obvious one:

“If anything happened to Marc-Andre Fleury, we weren’t strong enough to win playoff games if we get to that point,” general manager Kelly McCrimmon said.

Trades can be evaluated countless ways, but the one that brought goalie Robin Lehner to the Knights owns zero downside. No matter if he proves a rental or is here beyond this season, it’s a win on paper and ice.

Whether you’re on the side that believes Subban as a backup is better than his below-average numbers or that they are a true representation of his worth, you can’t pass on acquiring one of the more solid goalies in hockey with 18 games remaining in a playoff push.

Not at this price.

That the Knights traded Subban (who they obviously didn’t want any more), a middle-range prospect in defenseman Stanislav Demin and a second-round pick for Lehner is a job done well by McCrimmon and staff.

That a third team (Toronto) entered the deal that resulted in Vegas only paying a fraction of Lehner’s expiring contract is a job done very well.

Lehner was on a one-year deal with Chicago for $5 million, perhaps more a show-it choice by him to prove his playoff season with the Islanders last year was a true indication of his ability.

How time will be split between Fleury and Lehner as the regular season winds down is of great interest. The Knights have just two back-to-backs remaining, but did they really make this move to play Lehner twice in 18 games? No chance.

They will trust him as an option more than Subban. A ton more.

Fleury would also be the first to say this has hardly been his best NHL season — not by a long shot — and yet having four victories in the team’s current six-game win streak suggests his game might be trending the right way at the most important time.

But he did not escape injury the first two seasons in Vegas, so the idea that Lehner at this point is more insurance policy than anything makes sense.

It also gives Vegas the best tandem of goalies in the Western Conference and perhaps the entire league.

“I always expect (Fleury’s) game to be at a high level,” McCrimmon said. “He expects that. We expect that. He has shown that his entire career. There is no connection to bringing in another goalie to inspire him or push him or send a message. It’s not like that. You need to take it for what it is — we had a chance to acquire a great goalie and partner him with a great goalie and that makes us better.”

That’s for now, and when you believe there is enough in the room to make a legitimate run at the Stanley Cup, you make the deal without blinking.

The future, however, is more uncertain.

Fleury is 35 and has two years remaining on a contract at an average annual salary of $7 million.

Lehner is 28 and about to become an unrestricted free agent.

Even if the extension Vegas gave Fleury in 2018 is the worst contract on the books (it is), there are still very few bad ones across the roster.

Max Pacioretty’s was one until he decided to lead the team in goals (29) and accumulate 61 points thus far this season.

William Karlsson’s? Still to be determined.

Point is, the idea Vegas could make it work financially to sign Lehner following the season isn’t totally absurd. It would mean his salary and term demands aren’t outrageous and that the Knights envision him their best option post-Fleury.

Lehner, who has been part of goalie tandems in New York and Chicago the past two seasons, could also choose to walk and seek a long-term deal that would make him an unquestioned No. 1.

They’re all things to consider as this new duo begins its time together when second-place Edmonton visits T-Mobile Arena on Wednesday night.

Be it for short term or not, the Knights sent a trade deadline message Wednesday: Winning big wasn’t going to happen if Subban was suddenly asked to carry the load.

That’s no longer an issue.