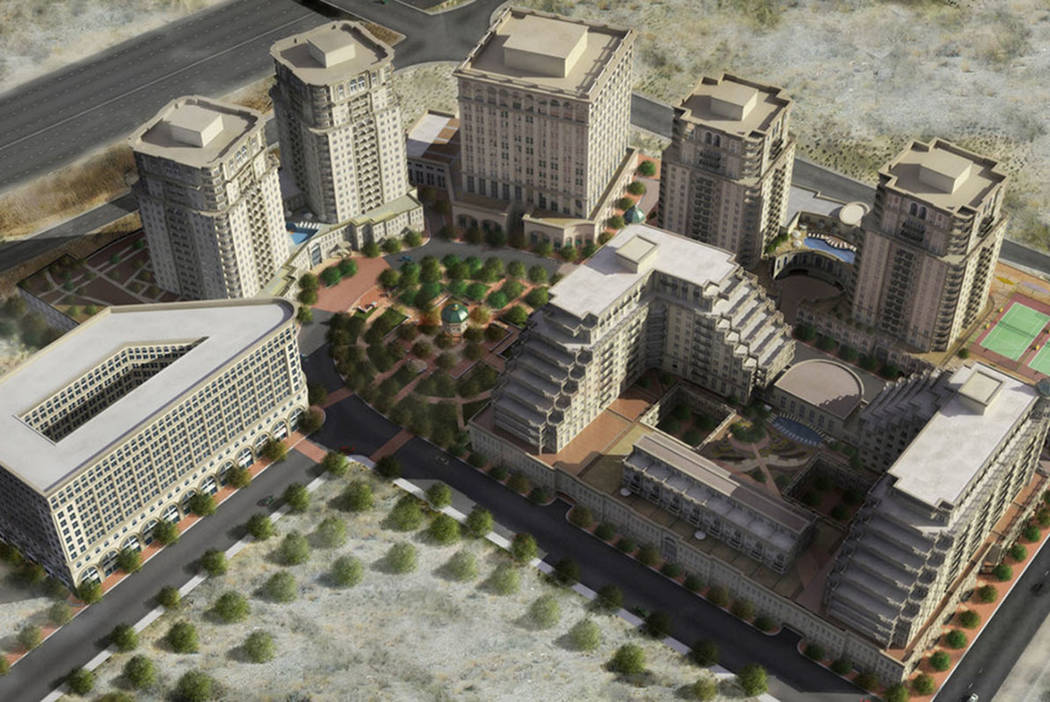 Las Vegas and Irish developers teamed up in 2006 to build Sullivan Square, a multi-tower project at Sunset Road and Durango Drive in Las Vegas, a rendering of which is seen here. It was never built. (Courtesy The Firm) 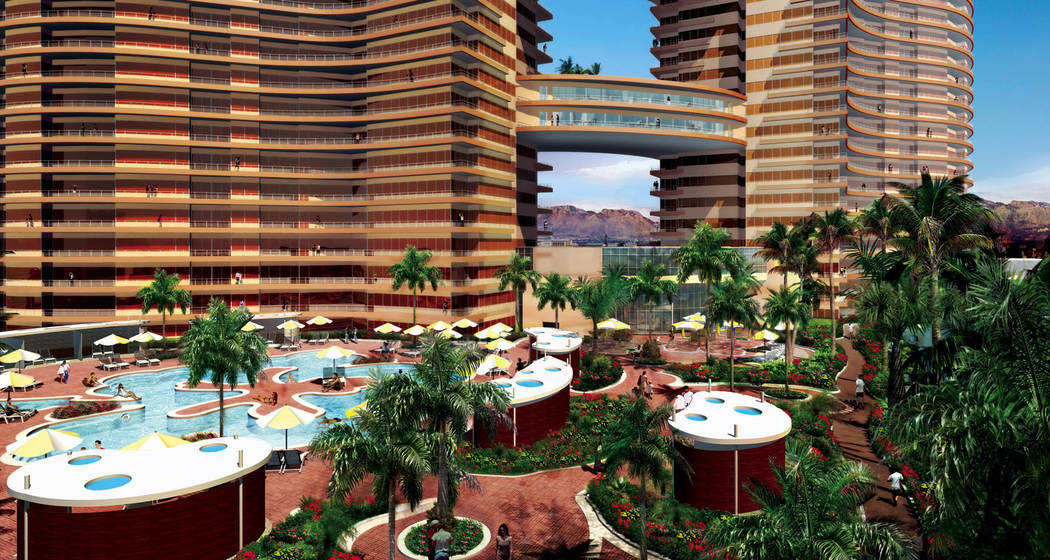 Pinnacle Las Vegas, a rendering of which is seen here, was supposed to have two 36-story towers on Tropicana Avenue at Cameron Street, near The Orleans. The project was never built. (Review-Journal file) 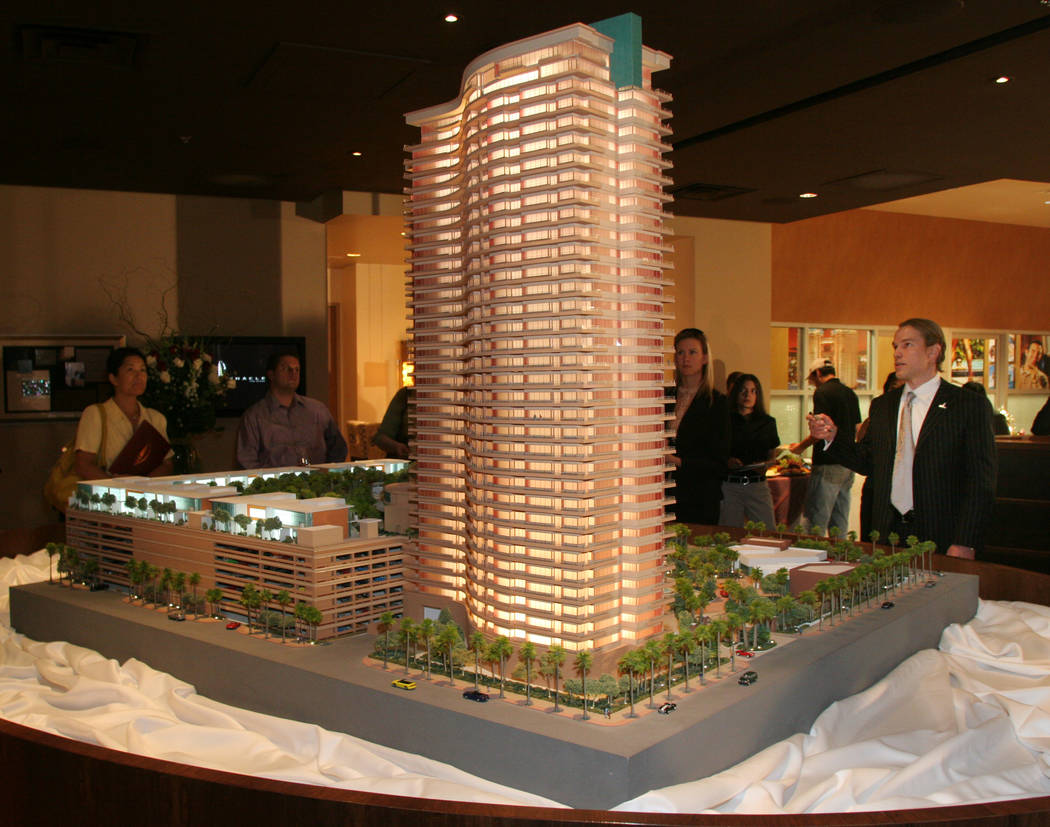 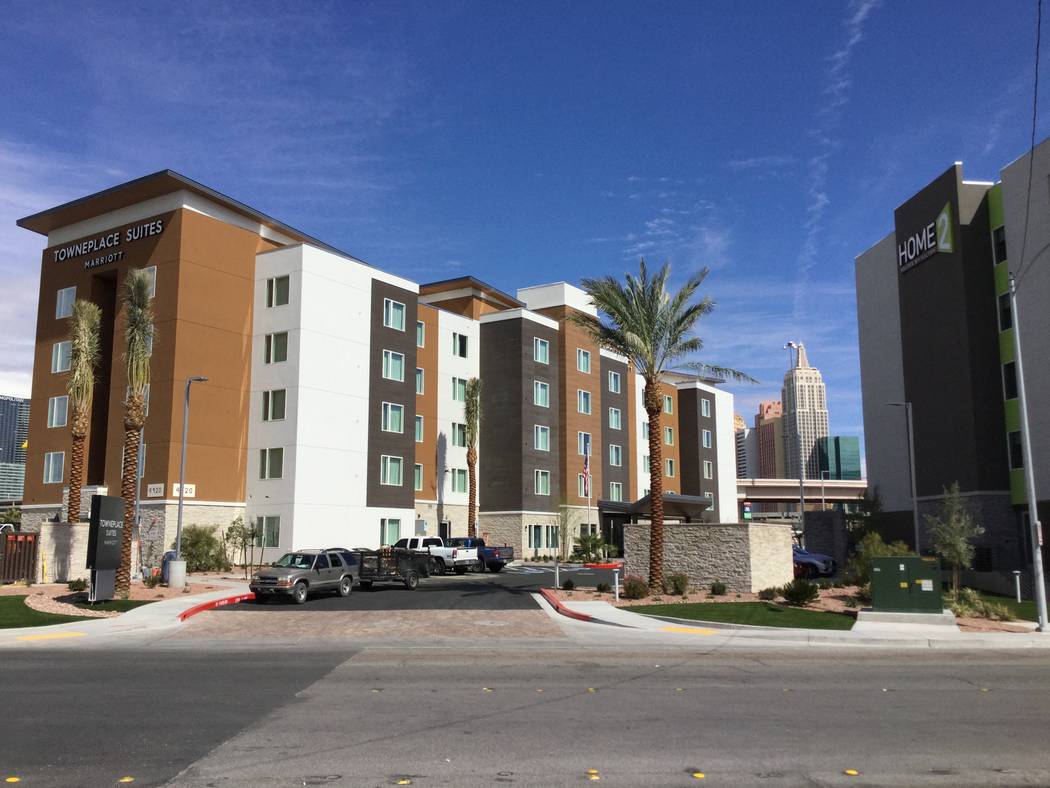 A TownePlace Suites hotel and a Home2 Suites hotel are seen Tuesday, March 5, 2019, at Tropicana Avenue and Dean Martin Drive in Las Vegas. An investor drew up plans for a 41-story resort there, One Trop, during the mid-2000s. (Eli Segall/Las Vegas Review-Journal) 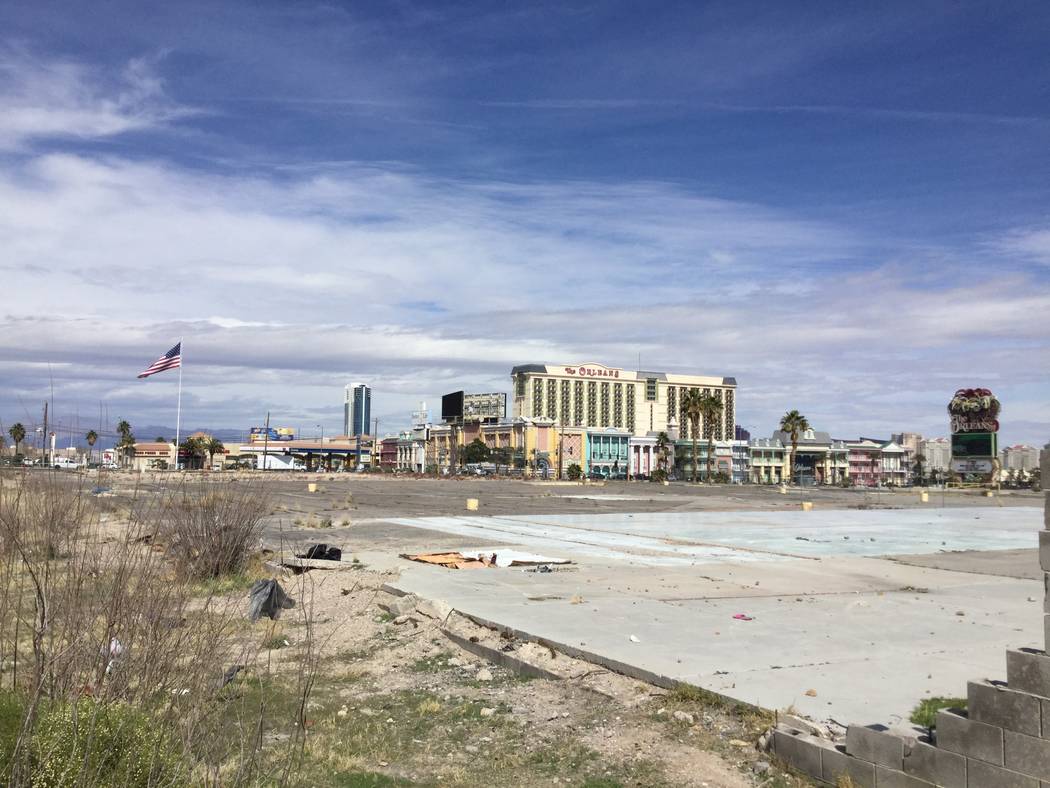 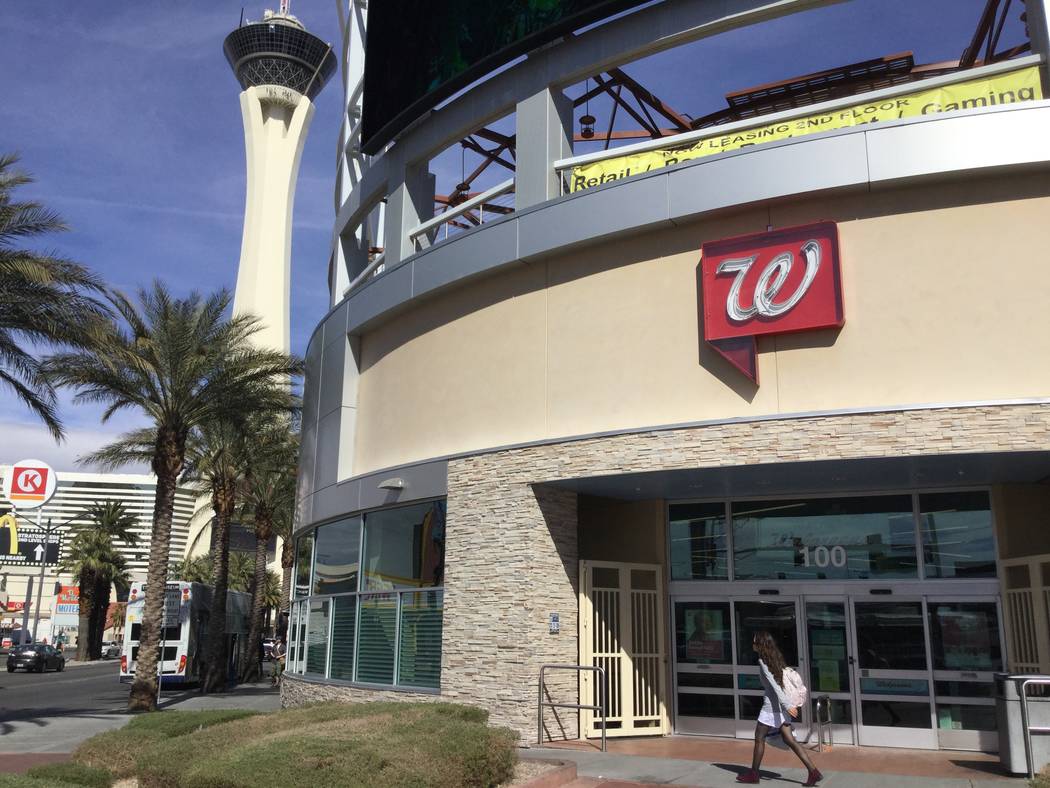 A Walgreens at the northeast corner of Las Vegas Boulevard and Sahara Avenue, seen Tuesday, March 5, 2019, sits on a parcel that years earlier was supposed to have the 80-story Ivana Las Vegas condo tower. (Eli Segall/Las Vegas Review-Journal). 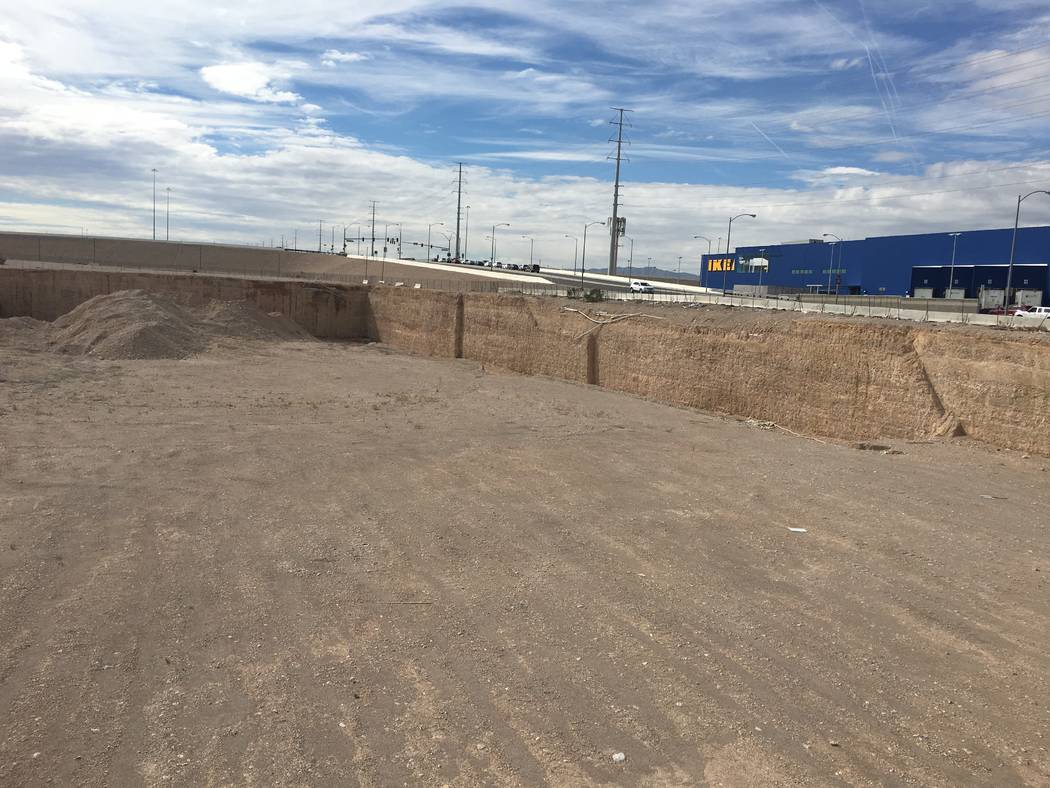 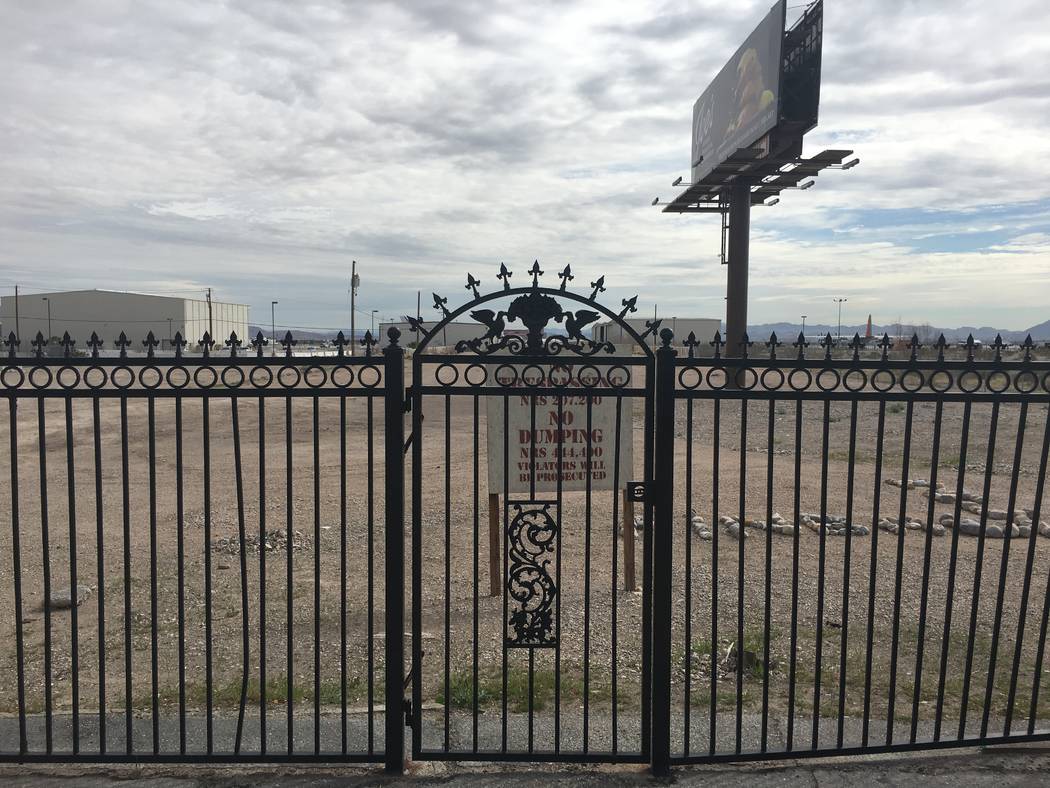 A Florida investor set out in the mid-2000s to develop a 26-story condo tower at this southern Las Vegas Strip parcel, seen Tuesday, March 5, 2019. He never built it and lost the site to foreclosure. (Eli Segall/Las Vegas Review-Journal) 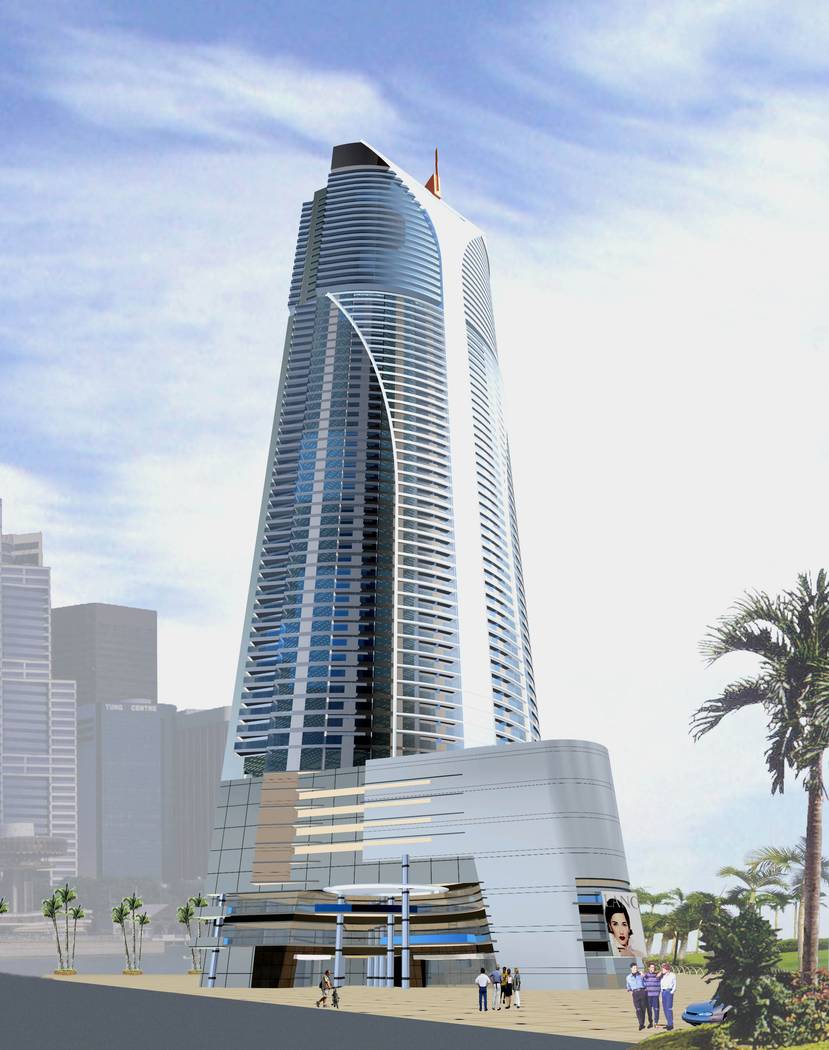 The 80-story Ivana Las Vegas condo tower, seen in this rendering, was supposed to be built at the northeast corner of Las Vegas Boulevard and Sahara Avenue. The project site today has a Walgreens. (PRWeb) 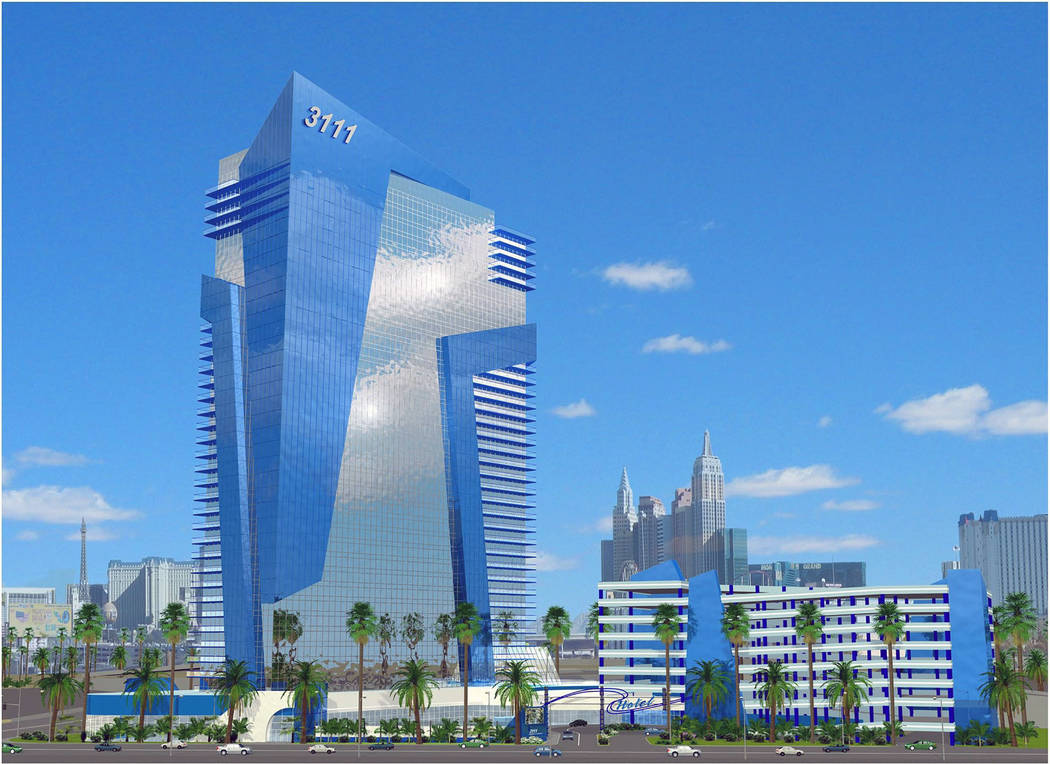 The 41-story One Trop, seen in this rendering, was supposed to be built at Tropicana Avenue and Dean Martin Drive. The site today has two small hotels. (Review-Journal file)

The scars of the recession have largely faded from Las Vegas’ once-battered real estate market. Foreclosures have plunged, formerly abandoned projects have been finished and the construction industry has come back to life.

But around town, there are still plenty of reminders of Las Vegas’ wild real estate boom and devastating crash.

Here’s a look at five sites where investors set out to build high-rises during the mid-2000s bubble, and what’s there today.

In 2006, Las Vegas and Irish developers teamed up to build Sullivan Square, a multi-tower project at Sunset Road and Durango Drive in the southwest valley. Plans called for 1,380 residential units, 45,000 square feet of retail space and 272,000 square feet of offices.

The valley was in the throes of a high-rise craze known as the “Manhattanization” of Las Vegas. But like most proposals from that real estate rush, Sullivan Square was never built – and like numerous other bubble-era projects, it was hit with litigation.

Contractors sued the developers, and the development team’s Las Vegas half sued its Irish partner, claiming its failure “to timely and sufficiently fund” Sullivan Square led to lawsuits, liens and a halt in construction.

The project site, across from Ikea, remains a giant hole in the ground.

In 2004, Todd Roth of Florida, through his company Metropolitan Land Development, acquired the Pollyanna Motel off the south Strip for more than $18 million. Soon after, New Jersey lender Kennedy Funding announced it had financed the deal on a few days’ notice.

“There are no ‘bad’ years in Las Vegas, as evidenced by sure, steady growth and a healthy, ongoing construction market,” the announcement said.

Roth filed plans to develop a 26-story condo tower and, court records show, reached a deal to sell the 1.76-acre parcel for a jaw-dropping $65 million. But the sale fell through, the tower wasn’t built, and the property went into foreclosure in 2008.

Last year, operators of the Pinball Hall of Fame bought the parcel for about $4.5 million and said they wanted to build a facility that would look, on the outside, like a pinball machine.

The land is still empty.

Once home to a Honda dealership, this site near The Orleans was earmarked for a massive project during the go-go years: two 36-story towers linked with three levels of sky bridge suites.

The $850 million hotel-condo project, Pinnacle Las Vegas, was supposed to have 1,100 units, a hibiscus-shaped pool, a putting green, and more.

But the project was never built, and the site traded hands through foreclosure in 2013.

Clark County commissioners in 2017 approved plans for a five-story, 293-unit residential complex there. The property, on Tropicana Avenue at Cameron Street, is still empty.

Marvin Lipschultz, owner of the Golden Palm hotel at Tropicana Avenue and Dean Martin Drive, drew up plans by 2005 to replace it with a 41-story resort. But the tower, One Trop, was never built.

The Golden Palm was demolished in 2016, after being closed for years, and the parcel, across from In-N-Out Burger, has two newly built hotels – a five-story TownePlace Suites and a five-story Home2 Suites.

In 2004, Australian developers unveiled plans for a 73-story condo tower at the northeast corner of Las Vegas Boulevard and Sahara Avenue, across from what’s now the SLS Las Vegas.

Initially known as the Summit, the project was slated to have a $35 million penthouse called the “cockpit,” and the sales office featured flashing lights, smoke machines and thumping music, the Las Vegas Sun reported.

By 2005, the project’s name had changed to Ivana Las Vegas after Donald Trump’s ex-wife Ivana Trump agreed to put her name on it. Press releases at the time said the tower would rise 80 stories.

“In Las Vegas, size does matter,” one announcement said.

The site was sold in 2007 for $47 million but went into foreclosure in 2010 after the economy crashed. The tower was never built.

Today, the property has a Walgreens.