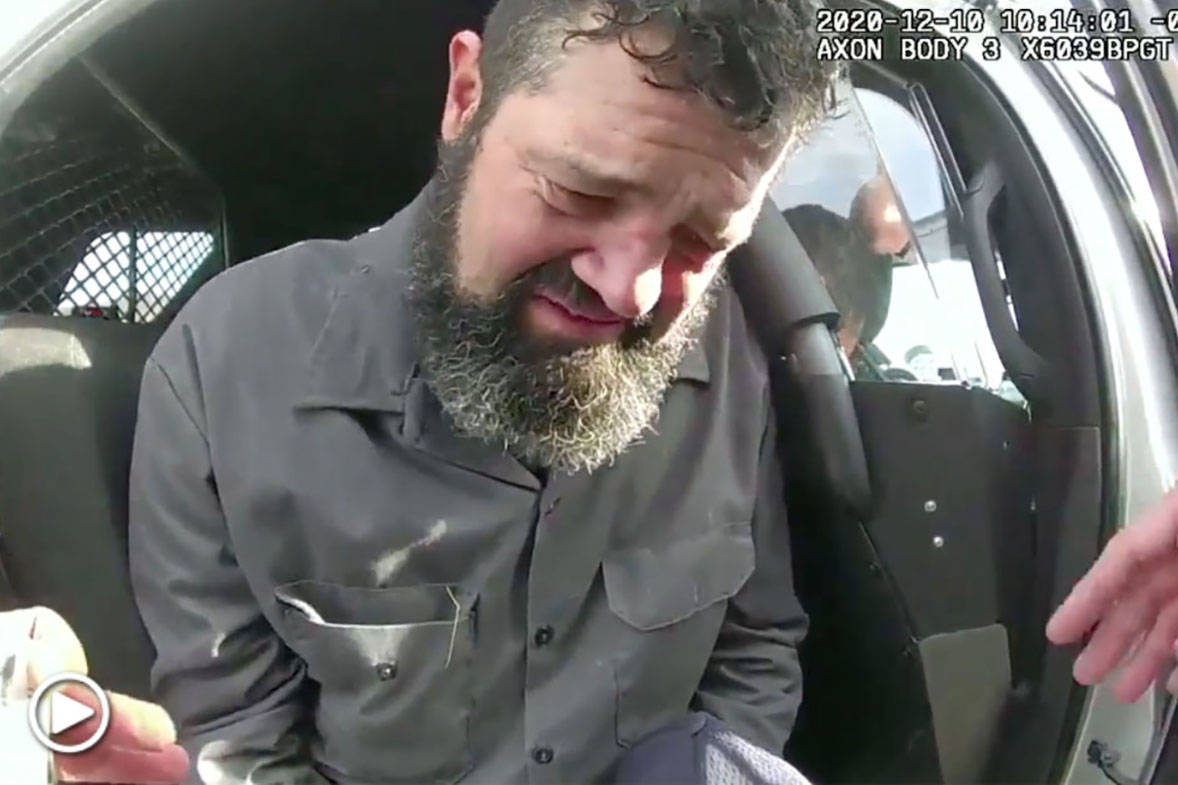 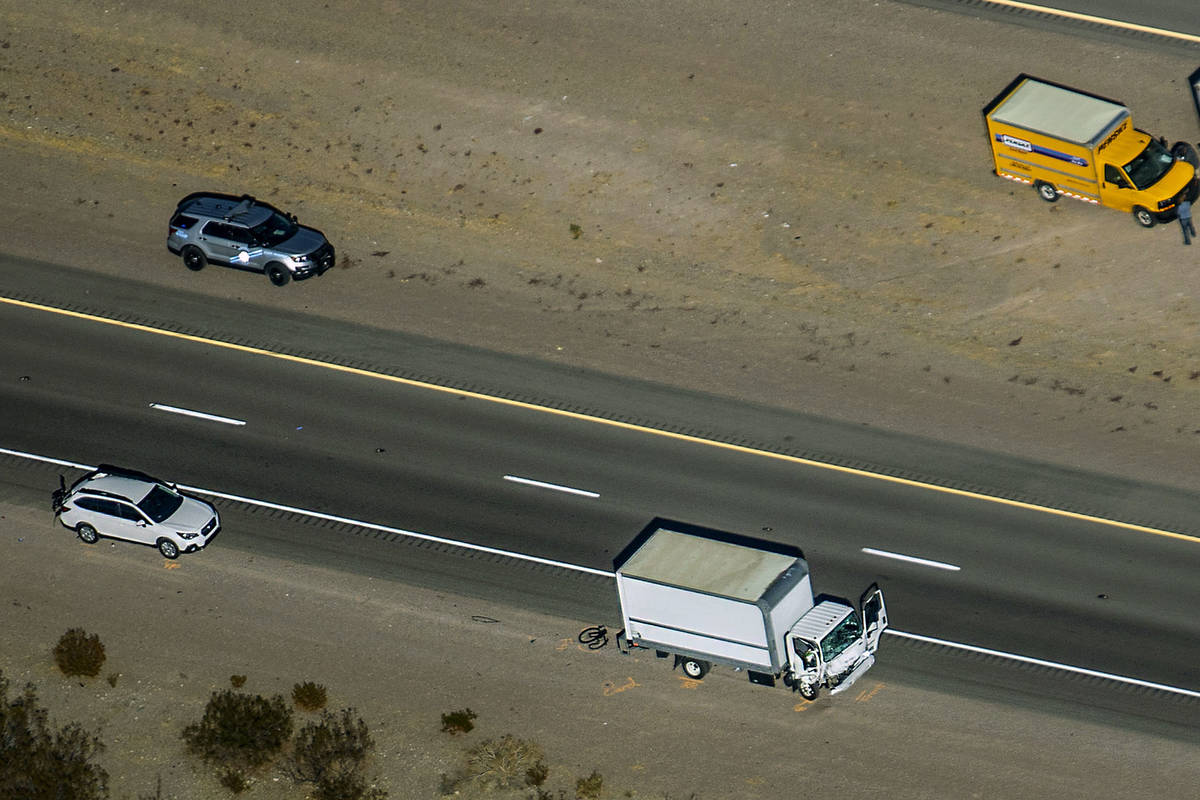 Damage to a truck is evident as the Nevada Highway Patrol works the scene of a fatal crash involving multiple bicyclists and a box truck along U.S. Highway 95 southbound near Searchlight on Thursday, Dec. 10, 2020. (L.E. Baskow/Las Vegas Review-Journal) @Left_Eye_Images 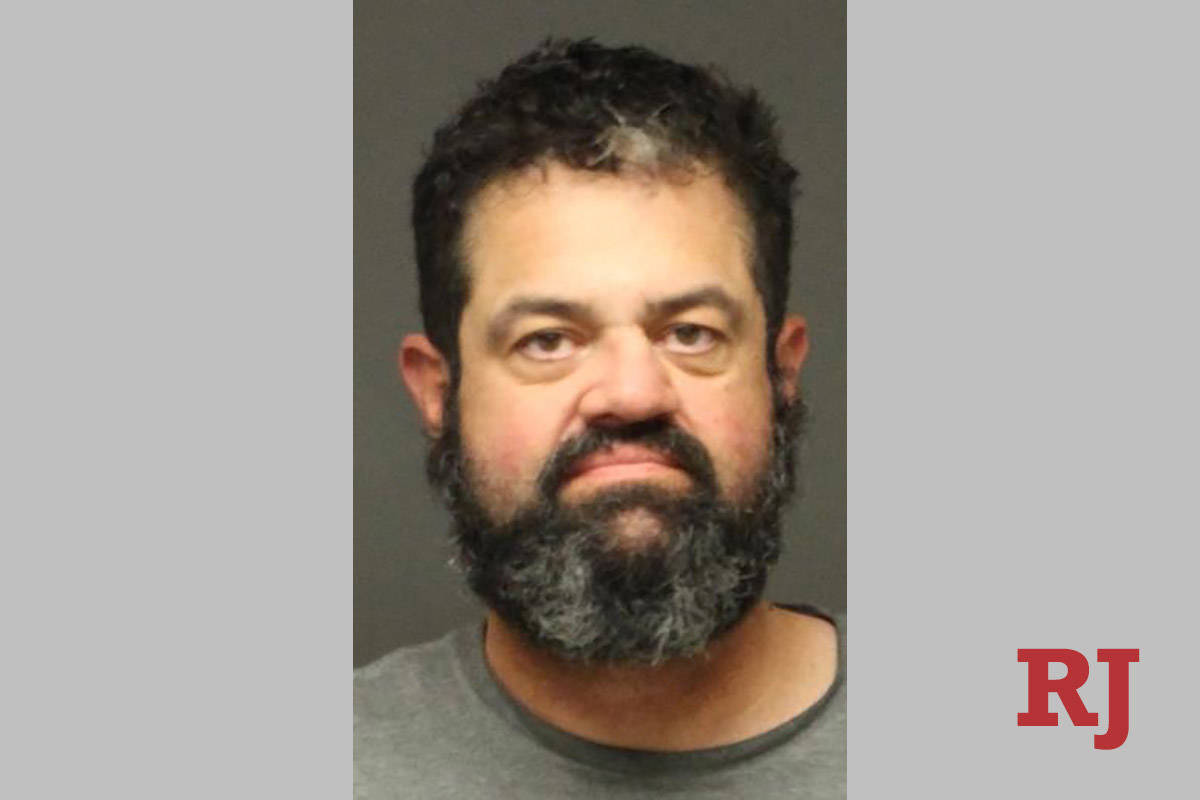 Through tears, Jordan Barson told Nevada Highway Patrol troopers that he didn’t remember crashing into the group of bicyclists last week on U.S Highway 95, and he must have fallen asleep.

The scene was captured in body camera footage released by the state’s Department of Public Safety on Wednesday, the same day Barson was arrested on DUI and reckless driving charges in connection with the crash that left five bicyclists dead.

It wasn’t until Monday, after a blood test revealed methamphetamine in the 45-year-old man’s system, that Barson told investigators he had used the drug the day before Thursday’s crash, according to the body camera footage.

Clark County District Attorney Steve Wolfson said Wednesday that authorities discovered “an extremely high level” of methamphetamine in Barson’s system, although the Highway Patrol previously said impairment was not a factor in the crash.

While at the scene, Barson told troopers he believed he had fallen asleep behind the wheel. Although he was unsteady on his feet during field sobriety tests, troopers smelled no alcohol on his breath and did not believe he was impaired, body camera footage showed.

“Of course the nine-step walk and turn and the one-leg stand was a disaster, but look how shaky he is,” one trooper told another in the footage.

Barson initially declined a blood draw, but he agreed to be taken to the hospital after troopers explained that his driver’s license would be suspended if they had to request a search warrant.

Other body camera footage showed two investigators meeting with Barson in his Arizona home on Monday. During the meeting, Barson admitted he was afraid the methamphetamine would show in the bloodwork.

He told investigators he used the drug the afternoon before the crash and then did not sleep well. He said he recently had relapsed, but that he threw out all his drug paraphernalia after the crash.

“I’m afraid I’m going to prison forever,” he said through tears, later adding, “I feel so bad for them, like why did I survive that?”

“What it comes down to, like anything else, is making choices,” he said. “When your choices, such as driving while intoxicated, affect other people’s lives, that’s when it becomes very serious.”

If convicted, Barson could face decades behind bars.

“When you look at the carnage that this man caused — losing one life is too many, but when five innocent people who were out for a bike ride lose their lives, the consequences of his behavior are so severe that it’s hard to think about minimum sentences,” Wolfson said.

Arizona court records show that Barson was found guilty of theft in Coconino County in 1995. He faced a dangerous drug violation in the same case, but the charge was dismissed.

Michael Anderson, one of the riders in the group, reported after the crash that the bicyclists had set out from Henderson’s M Resort to complete the roughly 130-mile Nipton Loop.

As they approached Searchlight, at least seven riders broke from the larger group to seek cover from the wind behind their safety escort vehicle, a 2019 Subaru Outback driven by David Merrill, according to a Highway Patrol report obtained by the Las Vegas Review-Journal.

Barson was driving a 2019 Isuzu NPR HD box truck in the same southbound travel lane when he crashed into the bicyclists, pushing them into the Subaru, the Highway Patrol report said.

All of the bicyclists who were killed or seriously injured were riding behind the Subaru, according to the report. Those killed were Erin Michelle Ray, 39; Gerrard Suarez Nieva, 41; Michael Todd Murray, 57; Aksoy Ahmet, 48; and Tom Trauger, 57.

Jerome Ducrocq and Jose Vasquez also were riding behind the car and were injured, Ducrocq critically. His condition was unknown Wednesday. Merrill also was injured, along with a third bicyclist who had minor injuries and declined to go to the hospital, the Highway Patrol has said.

Wilson declined to comment when reached by a reporter Wednesday evening.

Body camera footage showed investigators searching Barson’s belongings in the cab of the box truck and finding what they identified as possible drug paraphernalia.

The trooper who searched the bag listed items she pulled out: scissors, lighters, bandages and Neosporin. She and the other troopers agreed that the items could be signs of drug use, according to the footage, and that investigators should check for track marks.

As they searched the truck, another trooper interviewed Wilson, who arrived at the scene after the crash.

“He’s a good driver. He doesn’t have anything on his —,” she trailed off, in tears. “I do a drug test before I hire people, you know? I try to do my due diligence.”

As the investigation unfolded, troopers walked past the mangled remains of bicycles while riders sat on the side of the road, talking among themselves. Troopers thanked a pair of off-duty medical personnel who stopped to help, and a witness who pulled over after seeing the crash was visibly shaken.

They did not linger when passing the figures lying in the roadway, covered by white sheets.

“It’s like a freaking bomb went off,” one trooper remarked.