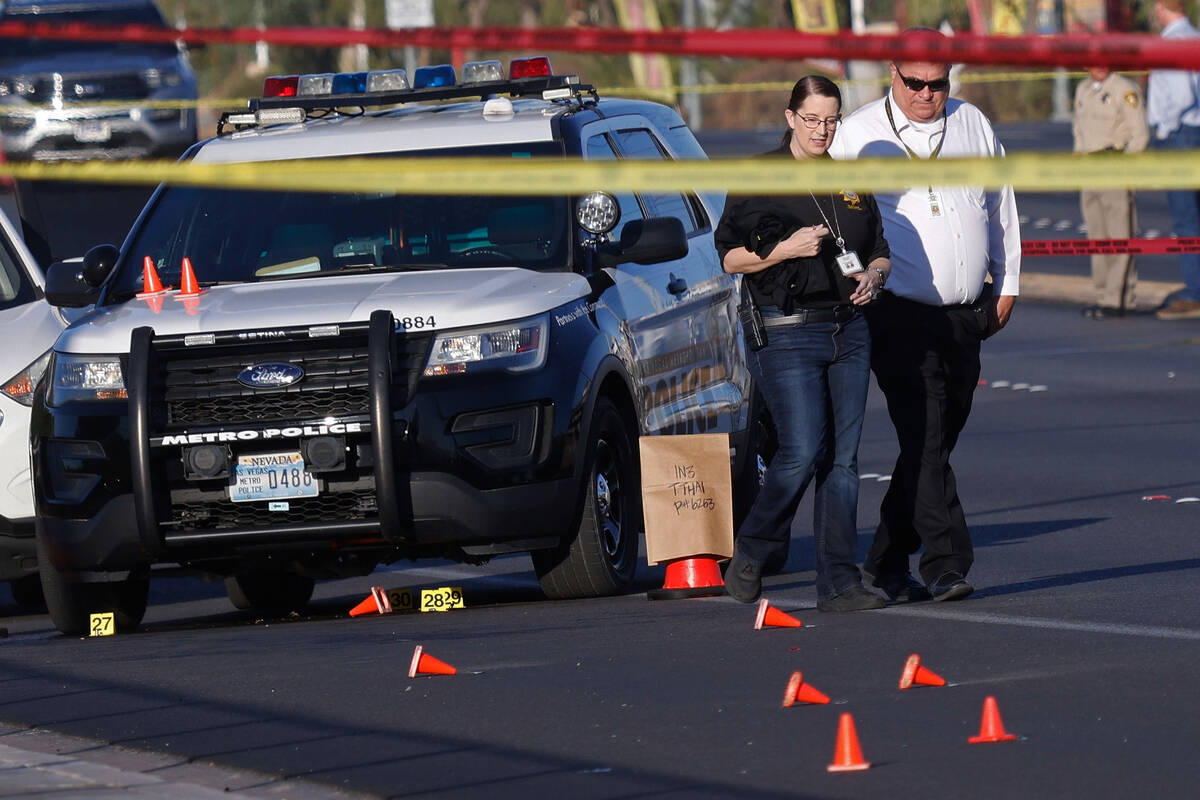 Las Vegas police investigate around the 800 block of East Flamingo Road after a shooting on Thursday, Oct. 13, 2022. A Las Vegas police officer was killed Thursday morning after an exchange of gunfire. (Chitose Suzuki/Las Vegas Review-Journal) @chitosephoto 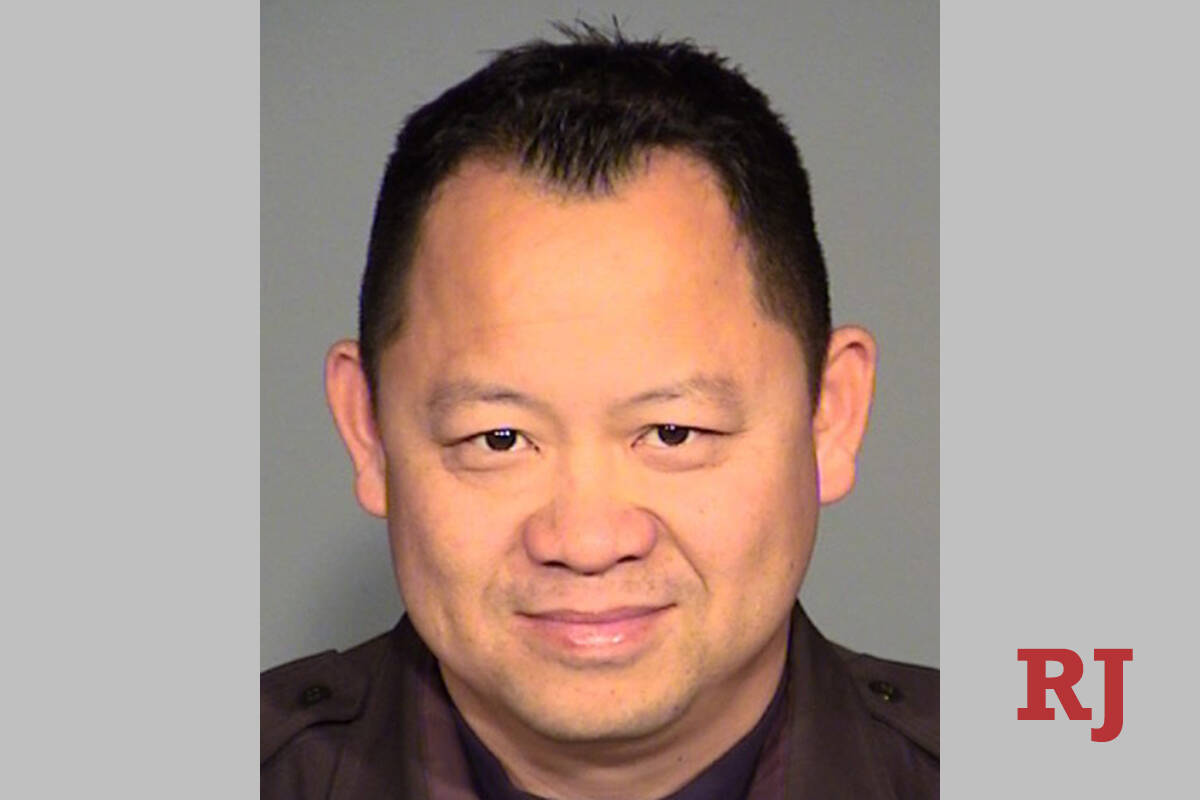 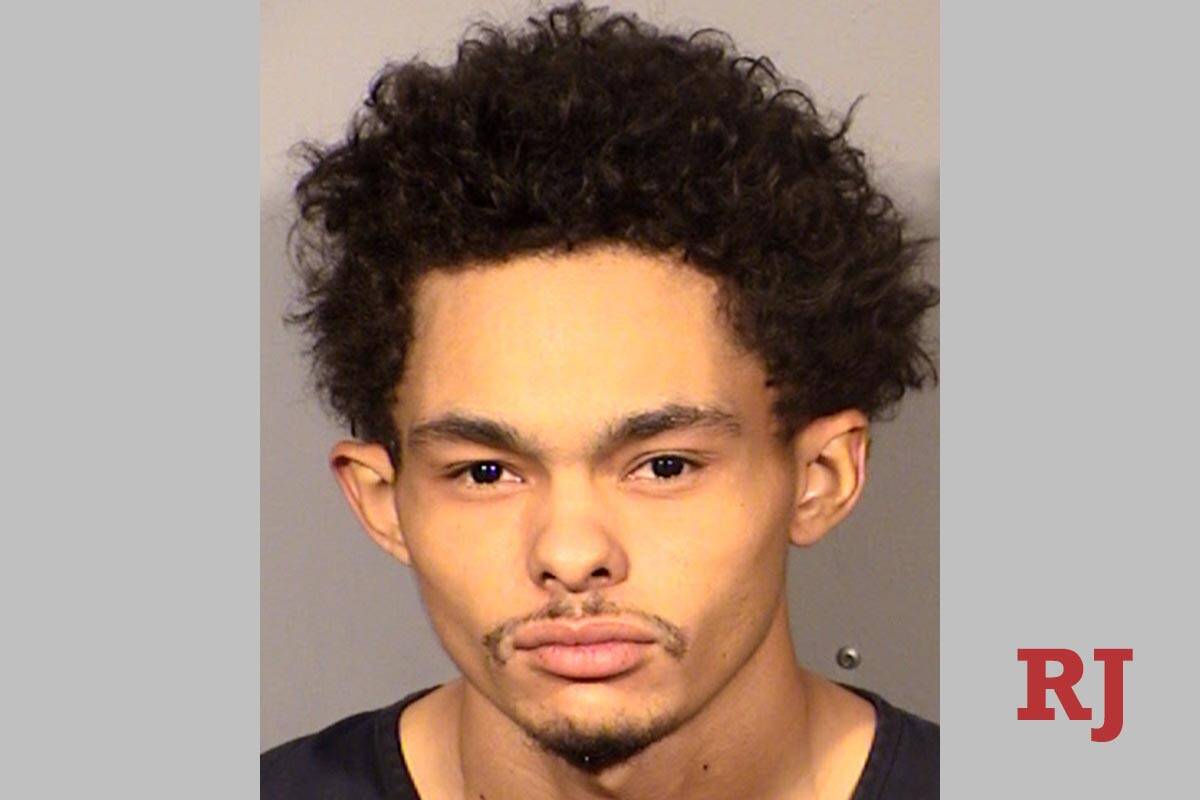 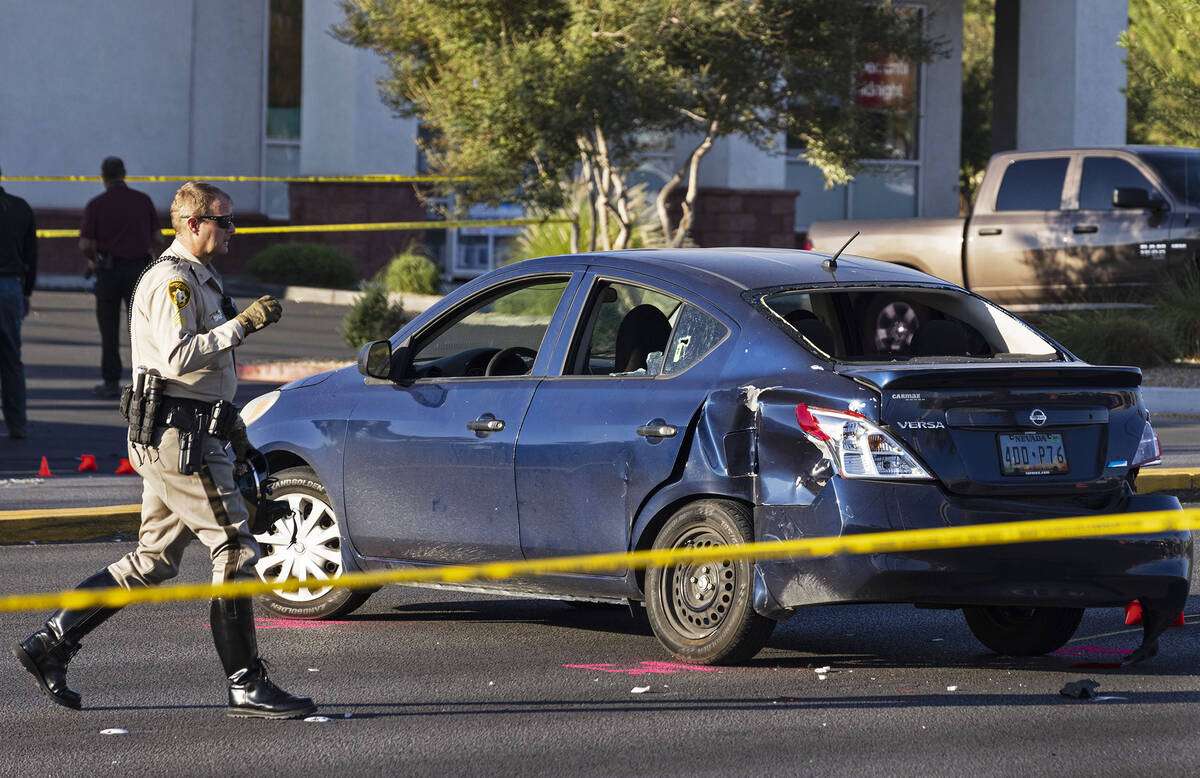 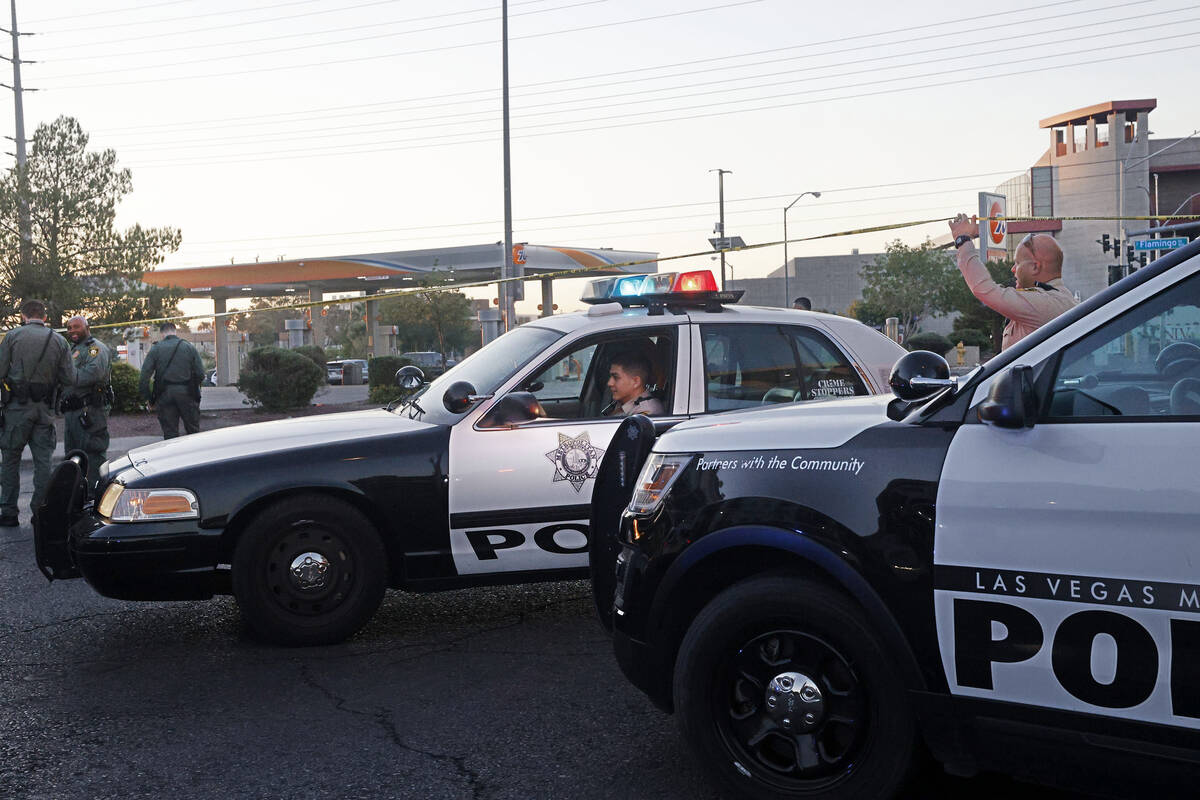 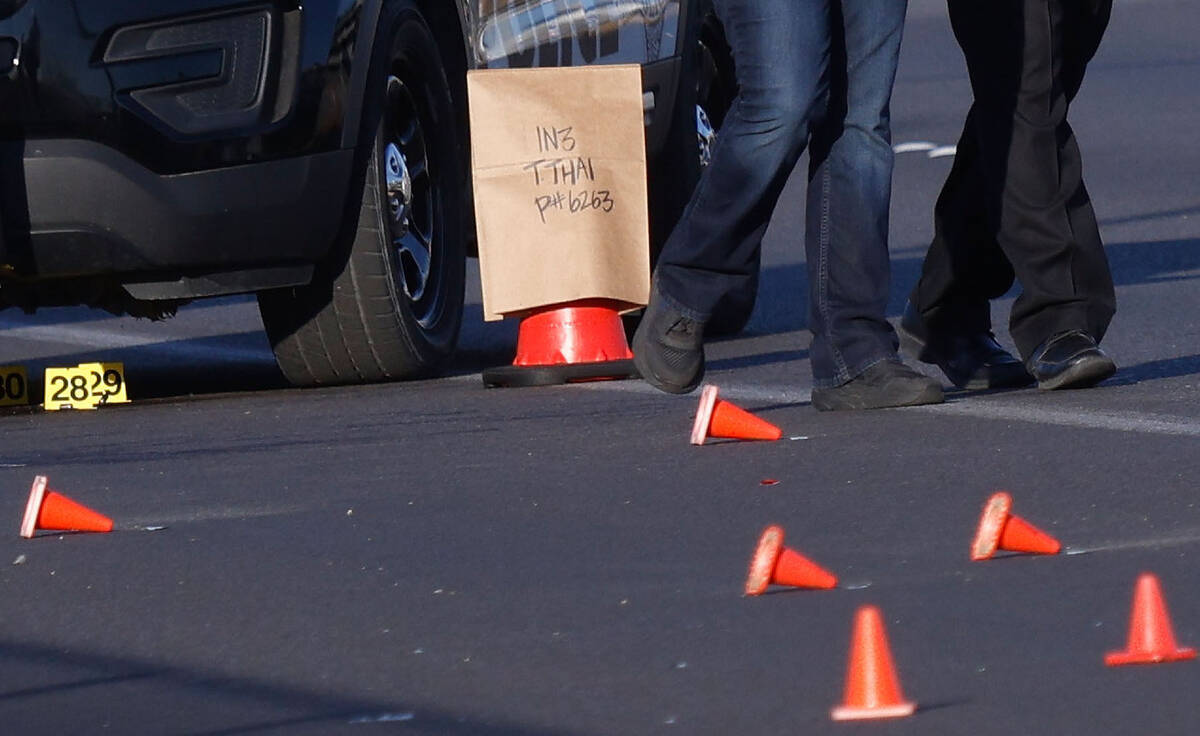 Orange cones are seen while Las Vegas police investigate around the 800 block of East Flamingo Road after a shooting on Thursday, Oct. 13, 2022, in Las Vegas. A Las Vegas police officer was killed Thursday morning after an exchange of gunfire.(Chitose Suzuki/Las Vegas Review-Journal) @chitosephoto 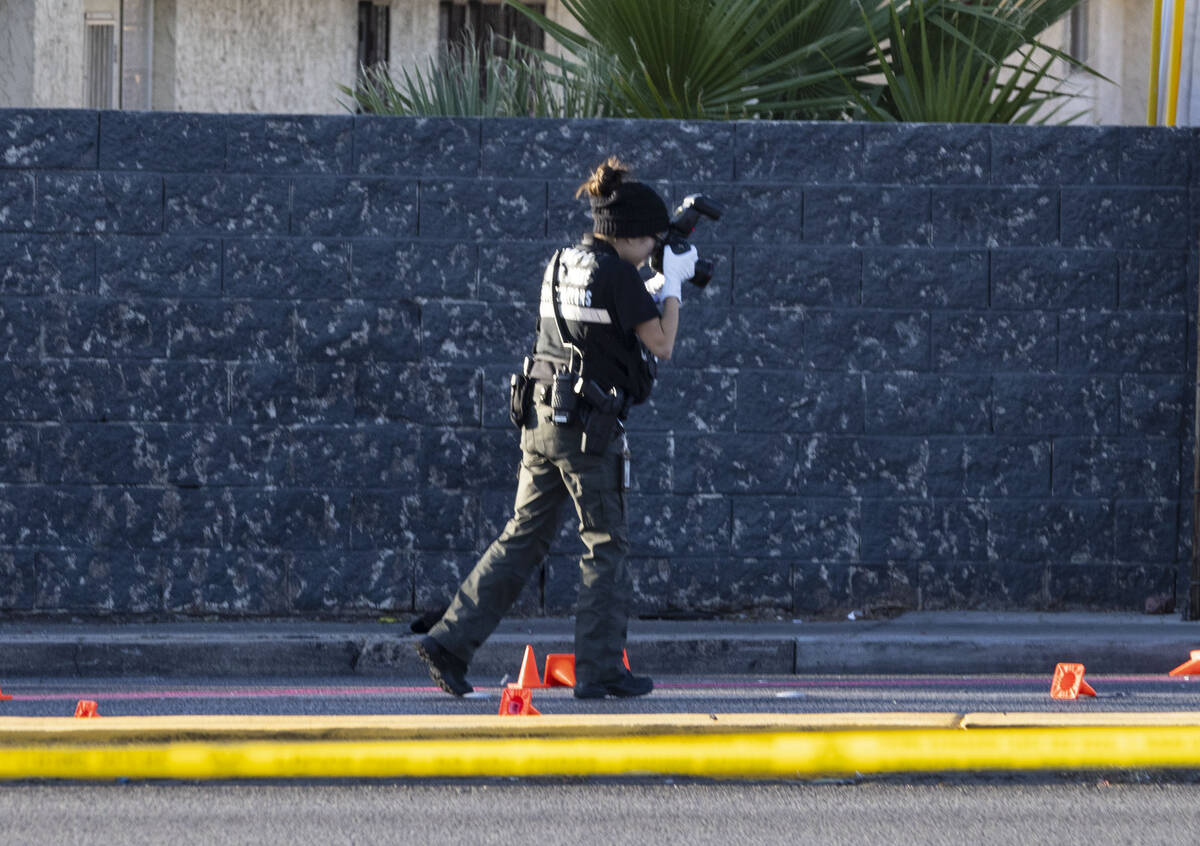 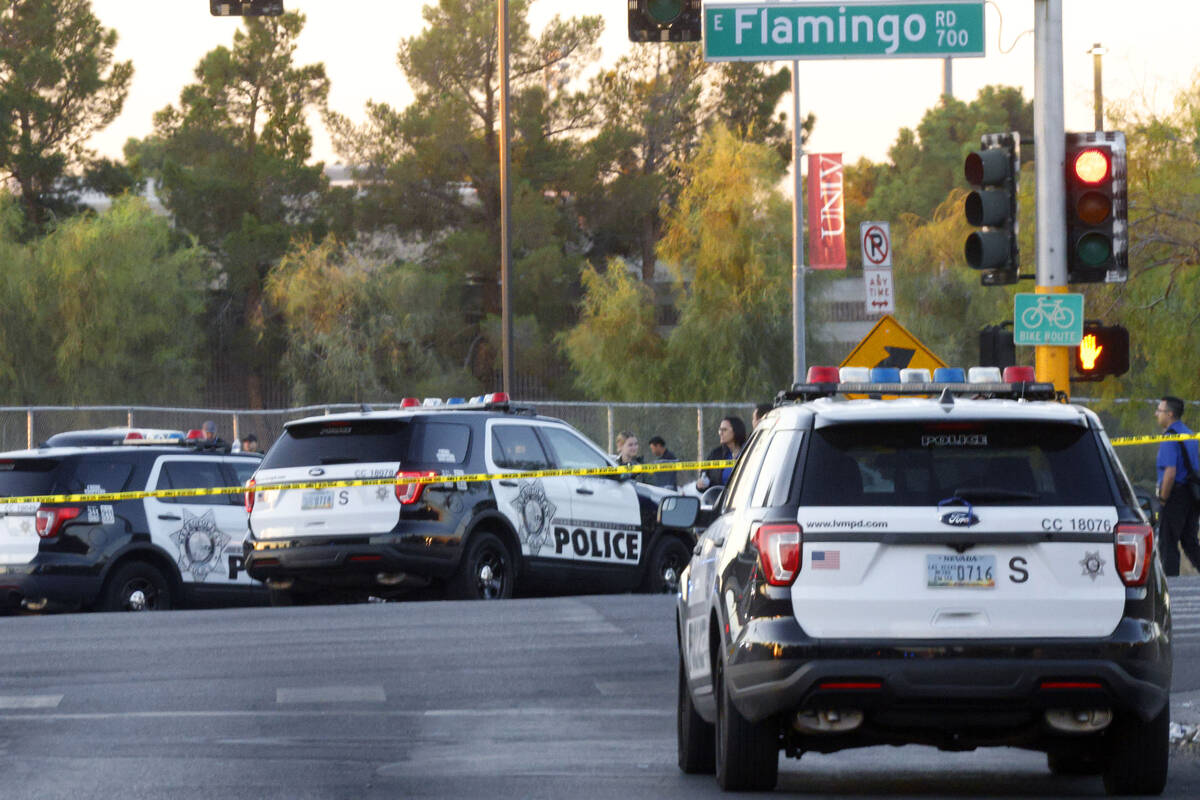 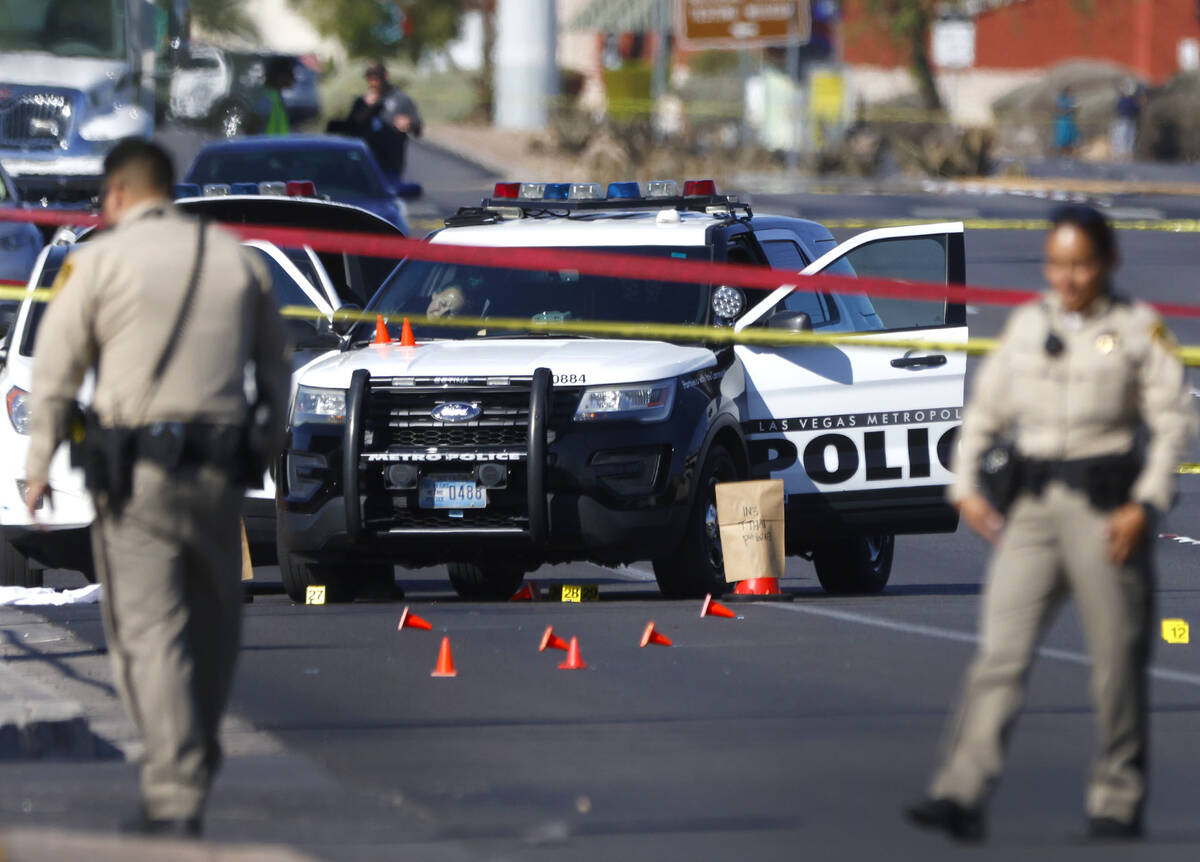 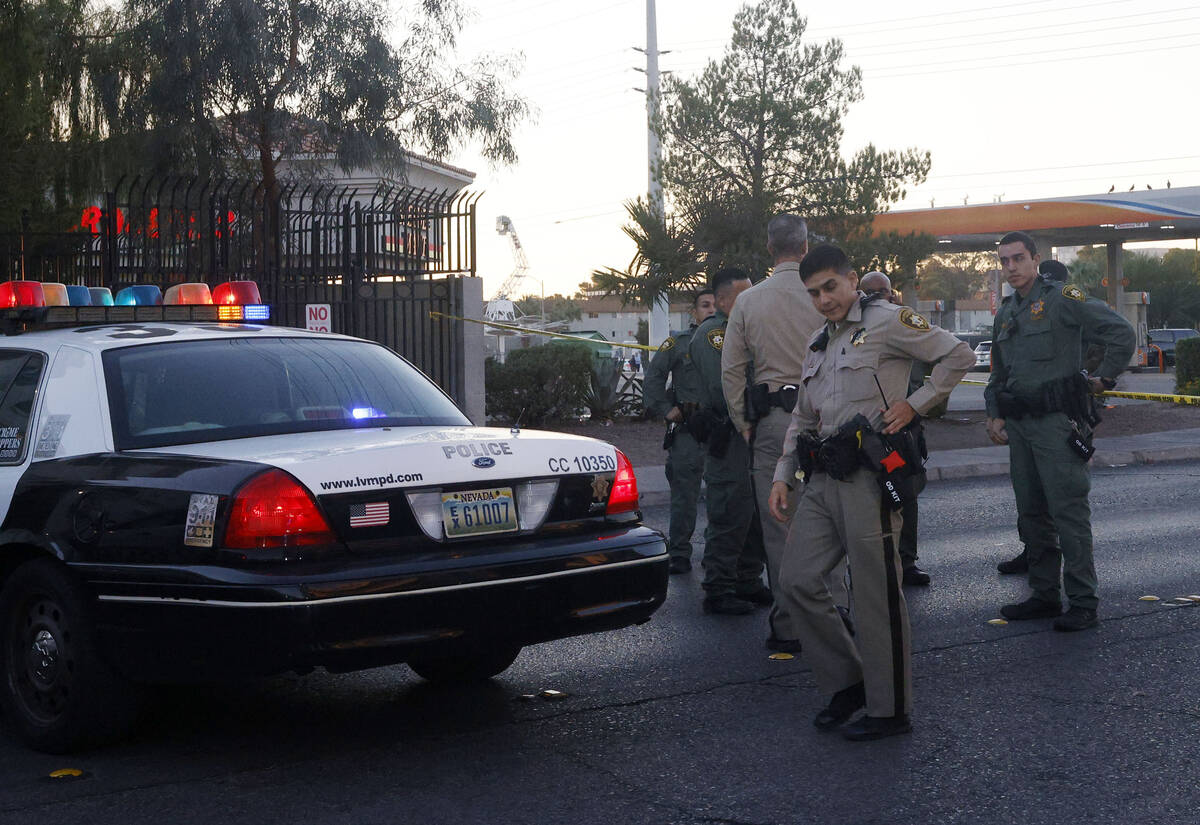 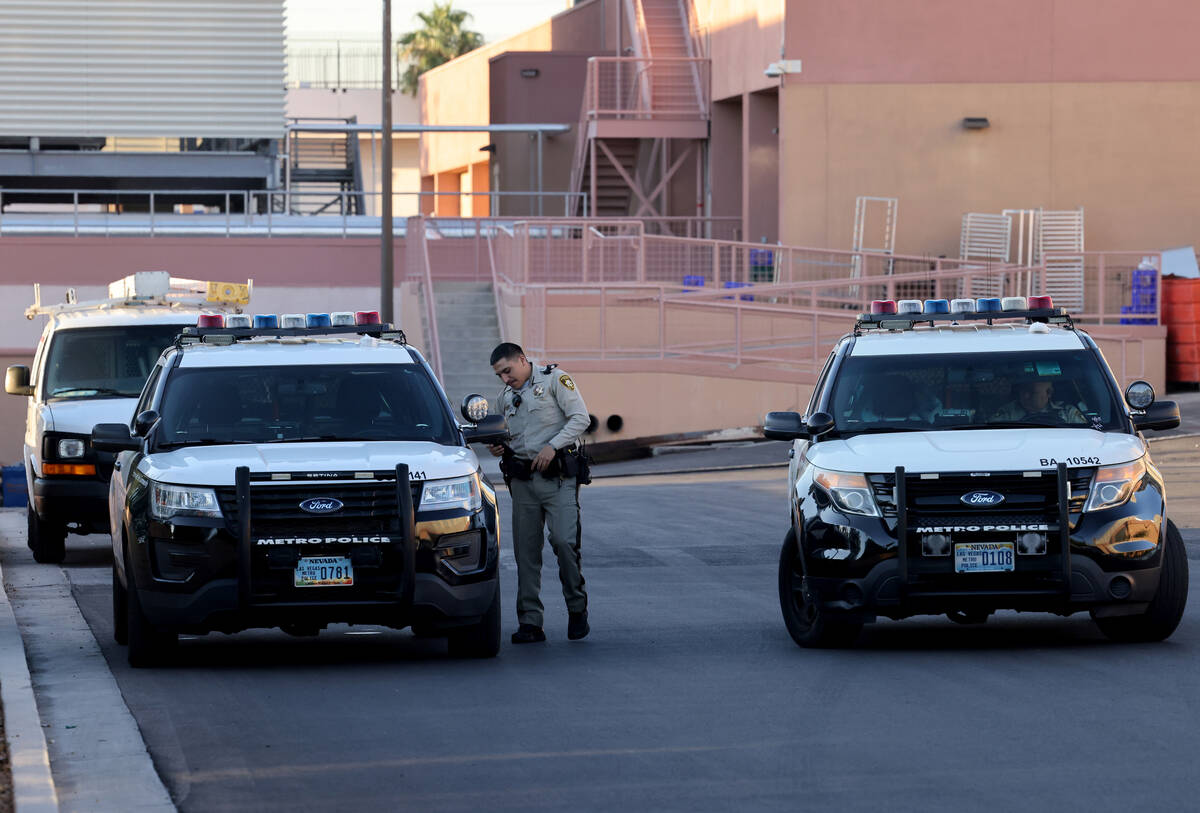 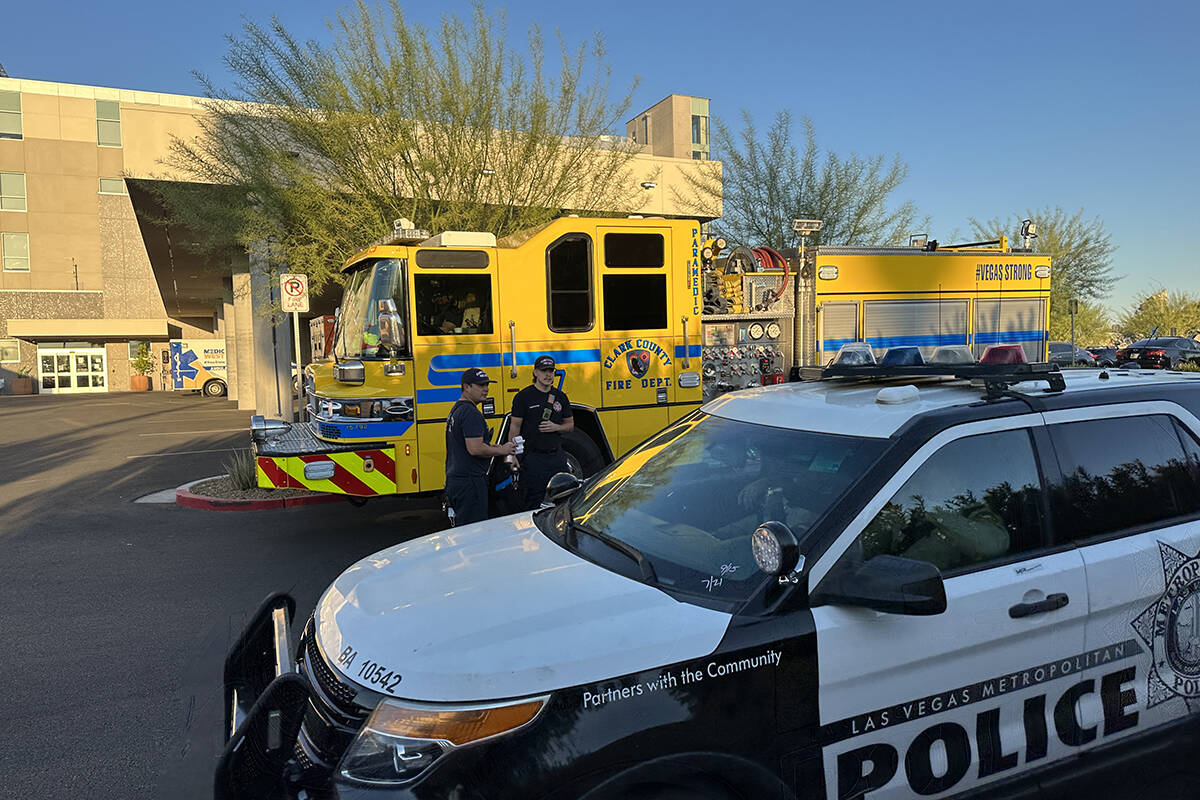 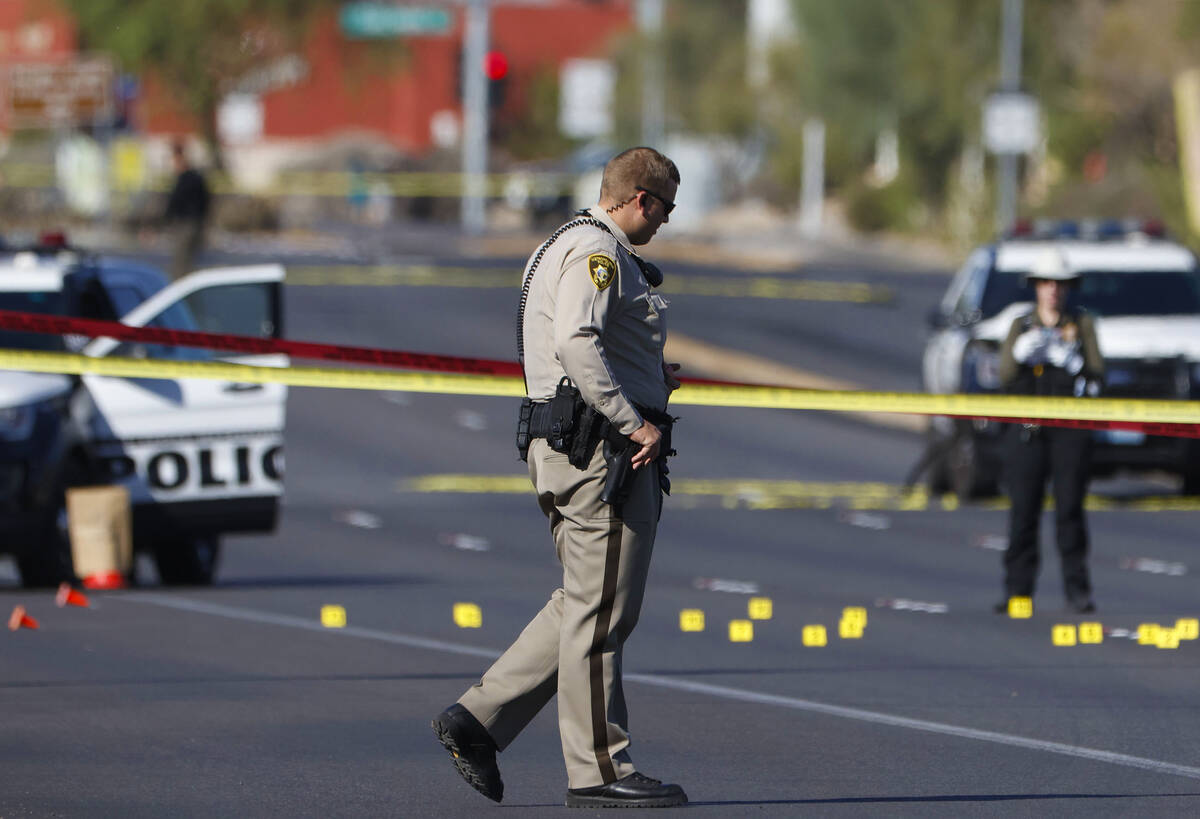 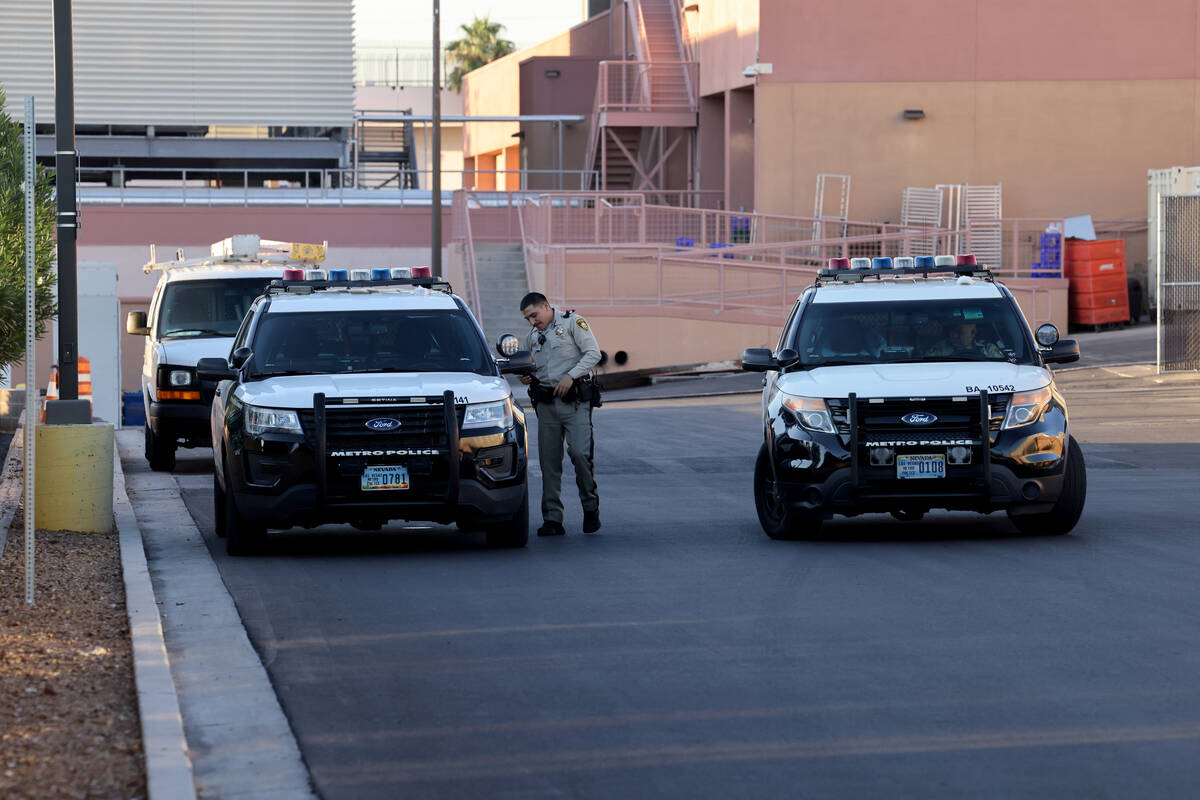 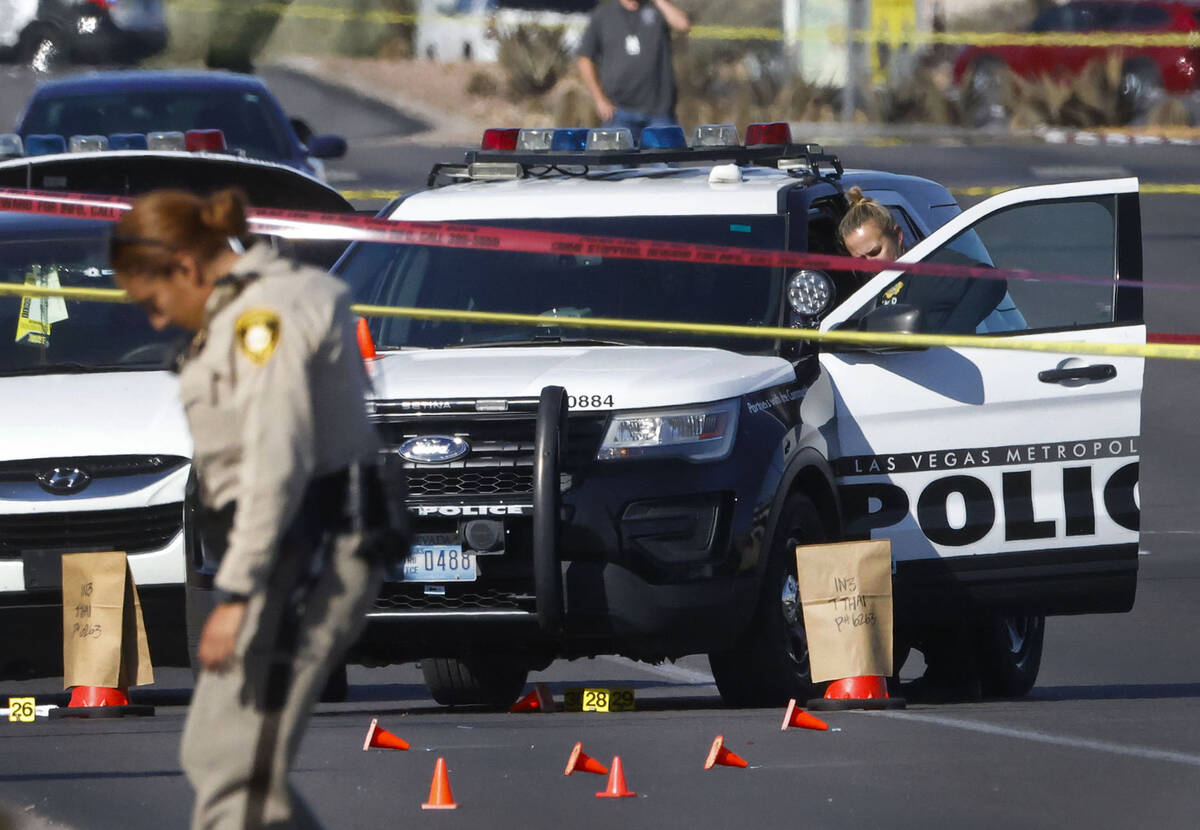 A veteran Las Vegas police officer who coached girls volleyball and had a passion for boating was fatally shot Thursday while responding to a domestic disturbance near UNLV.

Officer Truong Thai, 49, died at Sunrise Hospital and Medical Center from a gunshot wound to the torso. He had been with the Metropolitan Police Department since 1999.

“I was at the hospital early this morning with his ex-wife and his daughter,” Sheriff Joe Lombardo said Thursday, choking up. “Our condolences go out to his family. We will be helping them in any way we can in the following days. The incident demonstrates the dangers our officers face every day just putting on the uniform and doing their job.”

Officers were initially called around 1 a.m. to South University Center Drive and East Flamingo Road after a report of a domestic disturbance, according to a statement from the Metropolitan Police Department.

When Thai and another officer arrived in the area, 24-year-old Tyson Hampton opened fire, striking Thai and a civilian before driving off, police said.

Hampton was arrested with the help of a Metro K-9 unit near South Eastern Avenue and East Desert Inn Road. He suffered minor injuries, police said.

His initial arraignment is set for Friday morning in Las Vegas Justice Court.

Police said the civilian who was shot was hospitalized with injuries that were not considered life-threatening.

Lombardo declined to provide more details on the domestic disturbance.

Assistant Sheriffs Andrew Walsh and John McGrath and Las Vegas Police Protective Association President Steve Grammas stood behind the sheriff during the morning briefing with their heads hanging low. Deputy Chief Jamie Prosser silently teared up on the side of the room while Lombardo spoke.

The last time a Metro officer was fatally shot in the line of duty was on Oct. 1, 2017. Officer Charleston Hartfield was killed while attending the Route 91 Harvest festival on the Strip, the site of the deadliest mass shooting in modern U.S. history.

Hartfield attended the festival with his wife and “was shot while taking off-duty action to rescue citizens during the shooting,” according to Metro’s website. The shooting resulted in the deaths of 60 concertgoers.

In 2014, officers Alyn Beck and Igor Soldo were ambushed inside a Cici’s Pizza. Both officers were fatally shot.

“He was an experienced patrol officer who trained countless younger officers throughout his career,” Metro wrote in another statement Thursday.

Earlier in the day, Metro wrote in a tweet that Thai was a firearms instructor at one point during his time with the department.

“He’s an honorable officer, a commendable officer, and he’s done a fantastic job as part of the law enforcement community through his tenure here,” Lombardo said at the morning briefing.

Thai responded to Mandalay Bay the night of the 2017 massacre, minutes after beginning his graveyard patrol shift, according to officer reports released the next year.

Radio problems sent Thai and his partner, Sandeep Liske, to the security office to find a working phone and deliver updates to their sergeant about the shooter’s room number.

Las Vegas Review-Journal archives show that Thai filed a discrimination charge in 2011 with the Equal Employment Opportunity Commission, claiming he was subjected to different employment conditions at Metro because of his race. In 2018, the department settled the case for $30,000.

Thai divorced Angela Rose Thai in 2015, according to court documents. The pair shared custody of Jada Thai, now 19, and Truong Thai agreed to pay his wife alimony and child support each month until last year. His family could not be reached for comment Thursday.

Metro said Thai was a girls volleyball coach for many years and that his daughter loved playing volleyball with him.

“Truong’s family says he also had a passion for boating and loved visiting different destinations to enjoy the water,” Metro said in a statement.

The Injured Police Officers Fund set up a donation page in his honor. A candlelight vigil organized by the organization is scheduled for 6 p.m. Saturday at Sunset Park.

The south central area command, where Thai worked, had the highest number of calls for police response two out of the past three years, according to Metro data. The area is bordered by East Lake Mead Boulevard, East Warm Springs Road, Pecos Road and Paradise Road.

Valleywide in 2022, Metro officers had responded to more than 15,000 domestic violence calls as of Friday. Nearly 10 percent of those calls were in the south central area command.

Metro officials have often referred to domestic calls as the most dangerous for officers. Last year, Metro posthumously awarded a Medal of Honor to Sgt. Doug King, who police said saved a woman’s life while her husband was stabbing her in the doorway of their Summerlin home.

King died of COVID-19 in August 2021, and the victim of the stabbing said after his death that the officer had saved her life by fatally shooting her husband.

Another officer who responded, Jacob Adams, was honored as the employee of the quarter for the Summerlin area command, just days before King died, for his bravery during the encounter.

“Domestic violence calls are dynamic and rapidly evolving,” Lt. Jeff Goodwin said at the award presentation. “They present some of the deadliest calls both for the victims and the officers.”

On Feb. 1, 2006, a Metro officer was fatally shot after responding to a domestic violence call.

Several officers, including Sgt. Henry Prendes, 37, responded to the call, which involved a man beating a woman with a stick in the front yard. When the officers arrived, the suspect was already inside the home, police said. Prendes approached the residence and was killed by the suspect, who was armed with an assault rifle. Officers shot and killed the suspect.

Hampton pleaded guilty last year to drawing a deadly weapon in a threatening manner, according to court records. He was sentenced to probation and community service. The court ordered him to turn over a 9 mm Glock 19 as part of his sentence.

The charge stemmed from a July 2020 arrest. According to the arrest report, Hampton and his girlfriend returned to his mother’s home and started fighting with other people. Hampton was accused of aiming a gun at two women, including one who was 38 weeks pregnant.

Throughout the morning, local residents and officials expressed their condolences to Thai’s family.

Attorney Maggie McLetchie said Thai was a former client of her law firm.

“He was a good cop and someone who stood up for diversity and fair treatment of officers of color at @LVMPD,” she wrote.

“Kathy and I are very heartbroken by what happened,” Sisolak said. “A Metropolitan officer of 23 years of experience on the force was brutally murdered. Our hearts go out to him and his family and his colleagues and the entire community.”

“Clark County joins with the entire community in mourning the death of Officer Truong Thai, following his tragic death in the line of duty while serving and protecting others,” the county wrote in a statement. “Our hearts are with his family, friends, and the entire LVMPD force.”

Nevada State Police expressed condolences to “our brothers and sisters” for their loss.