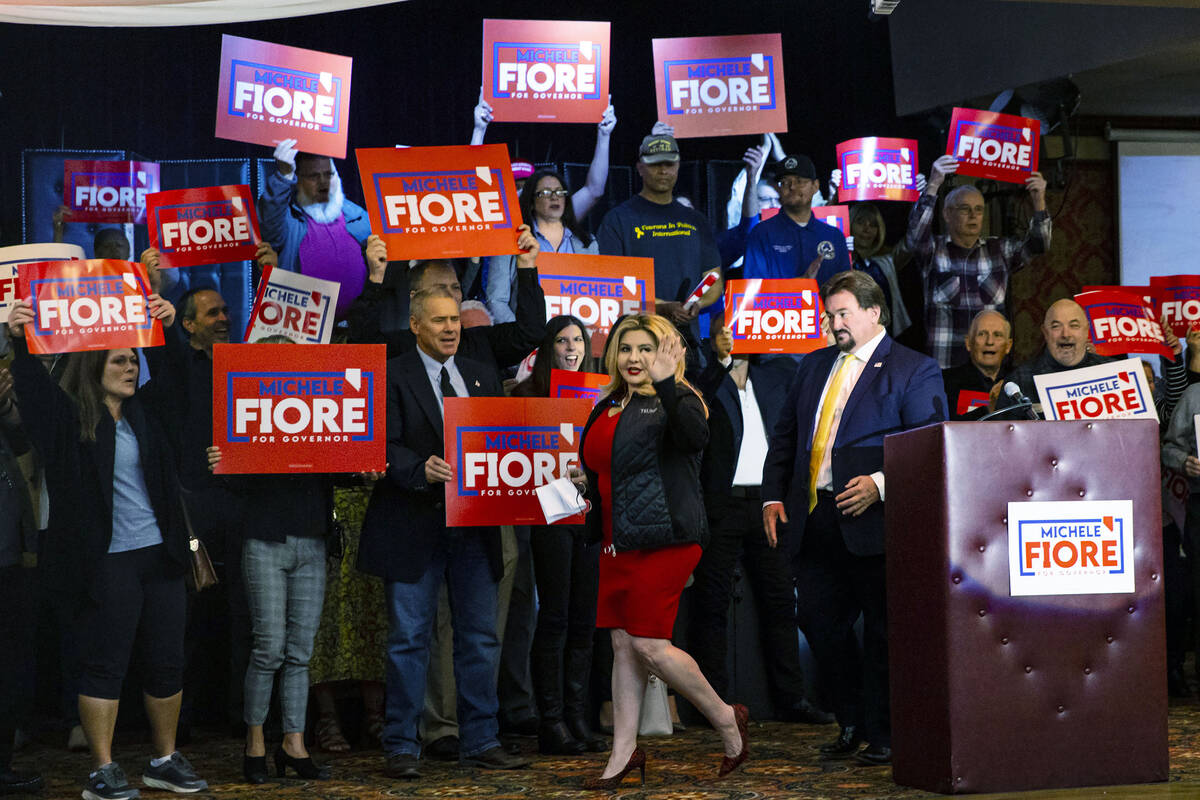 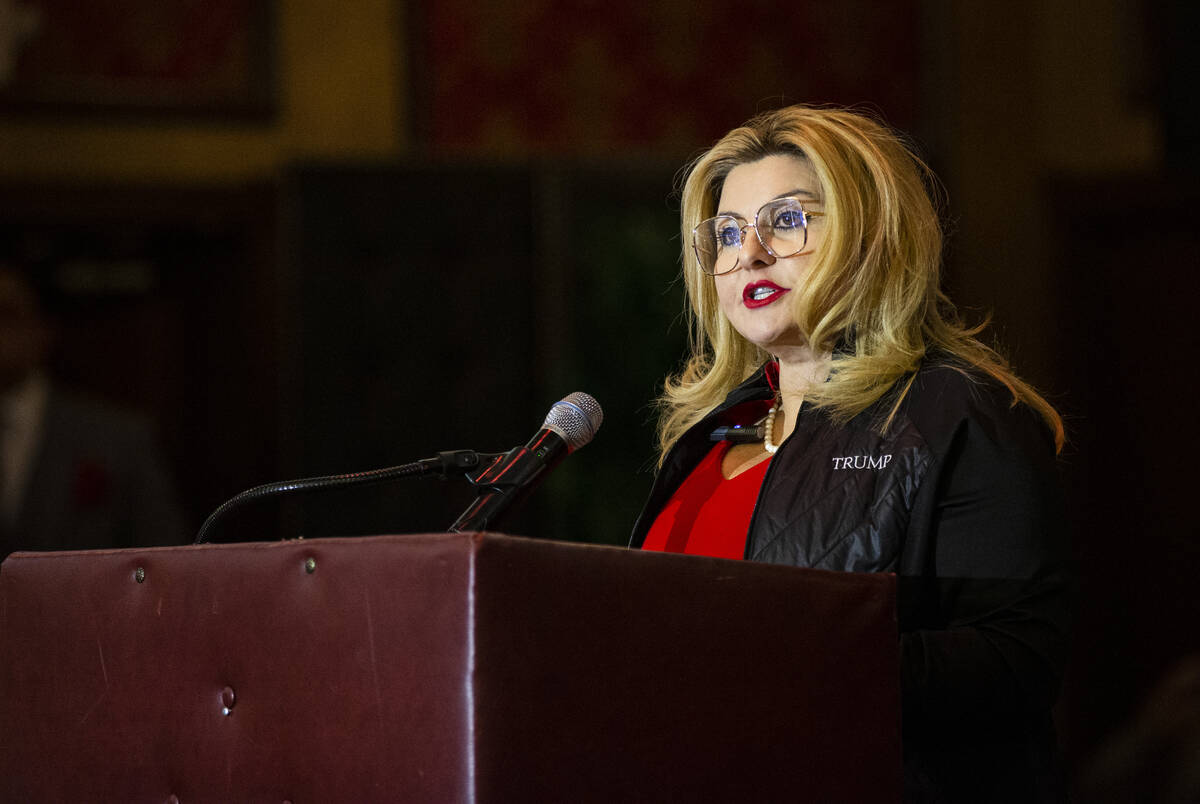 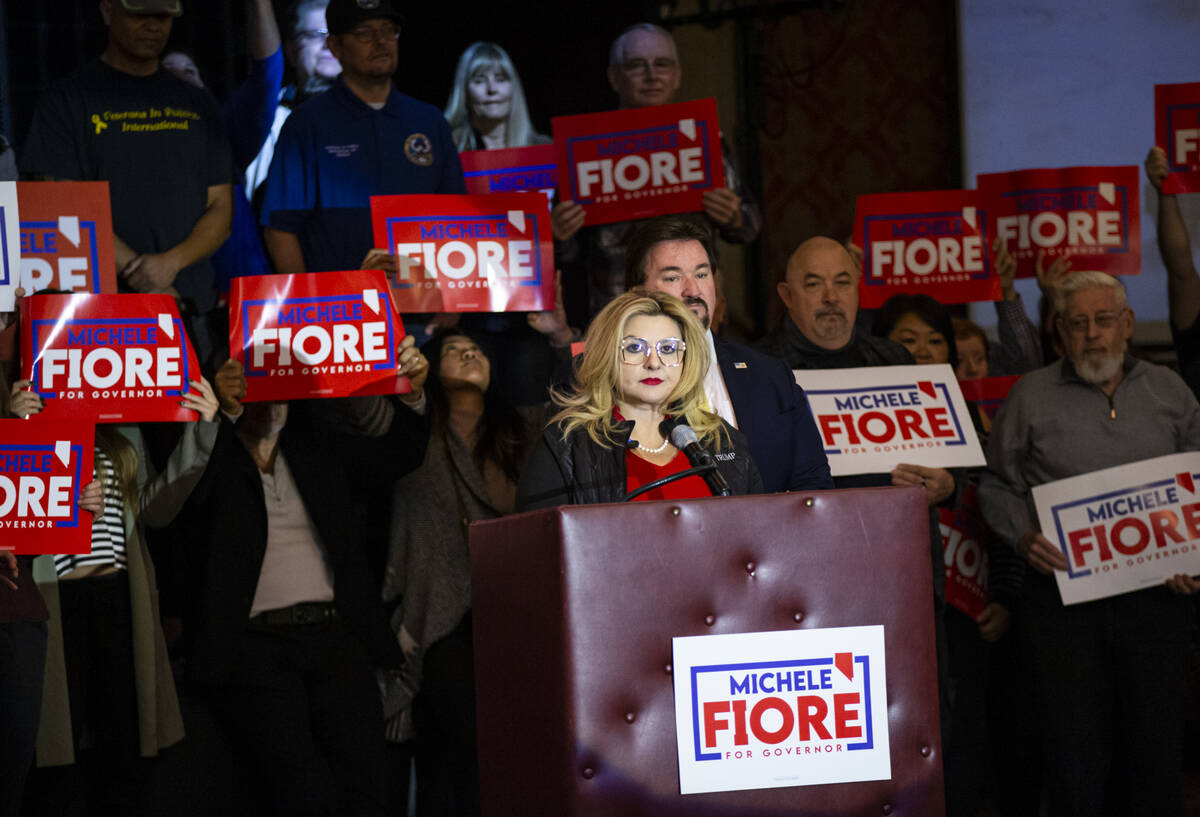 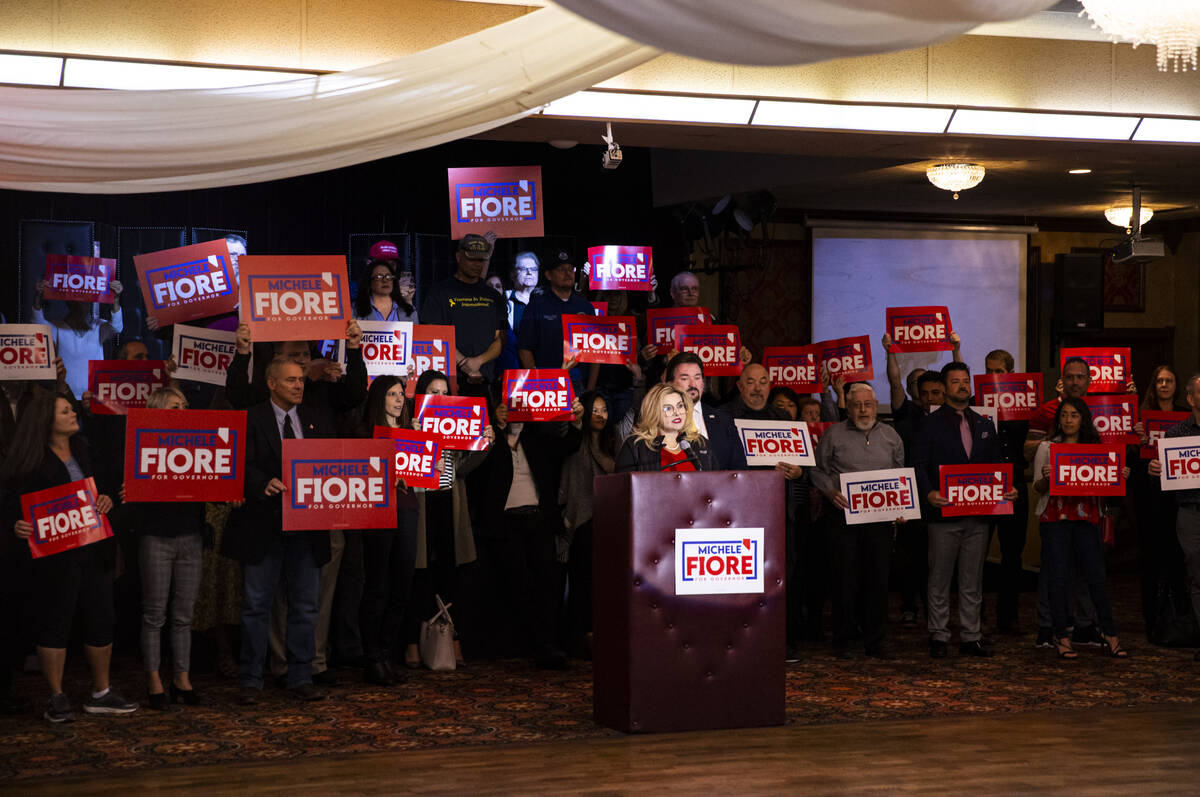 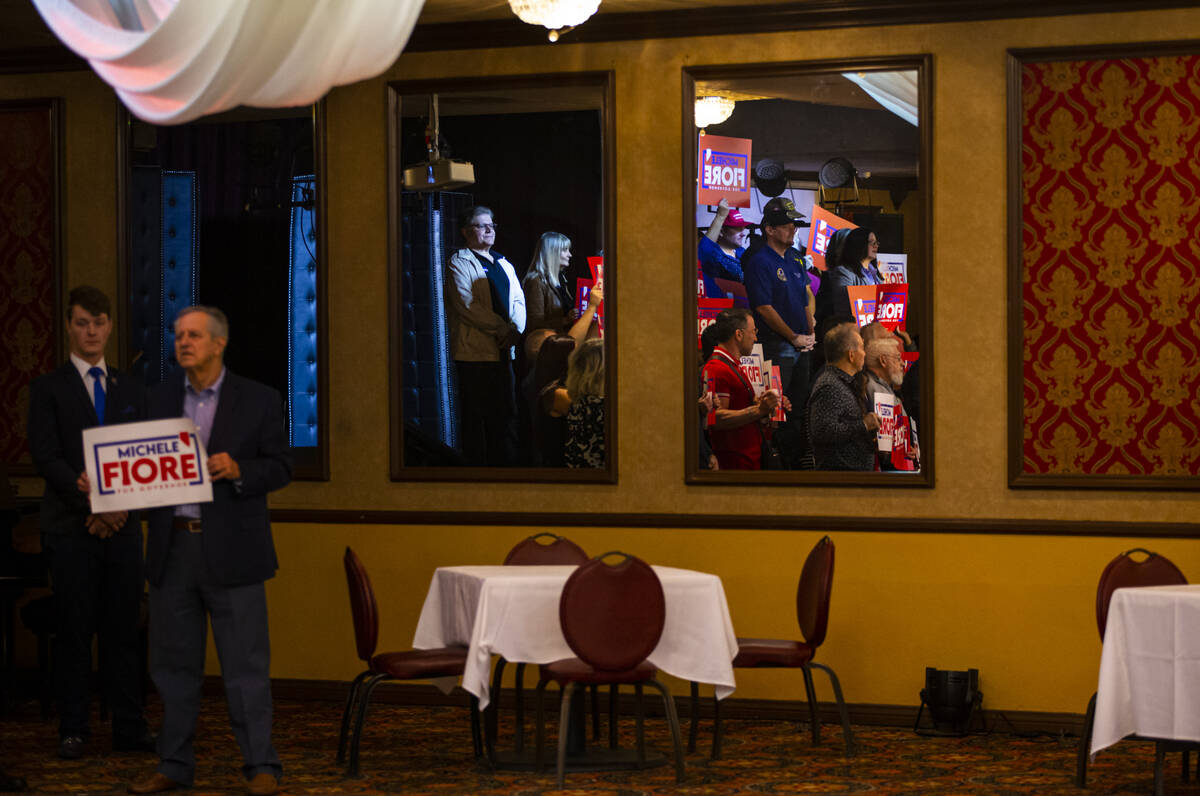 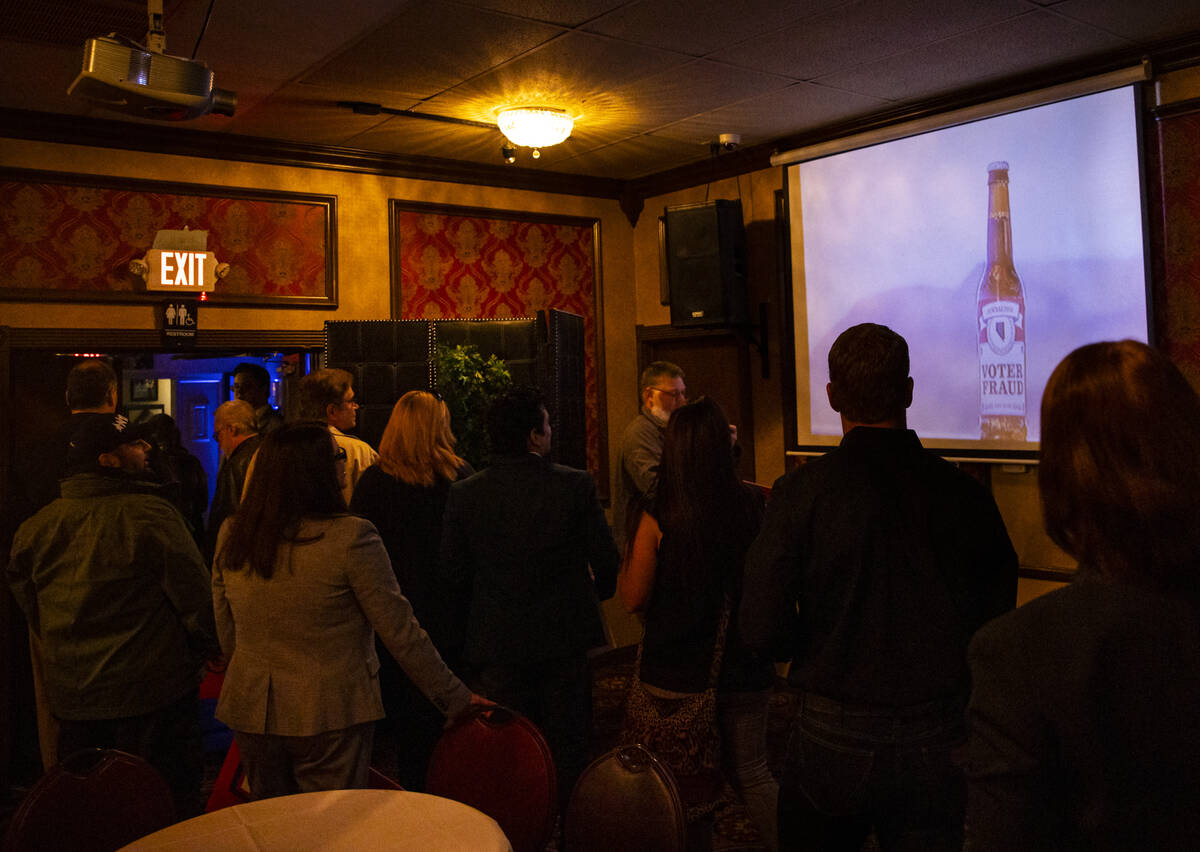 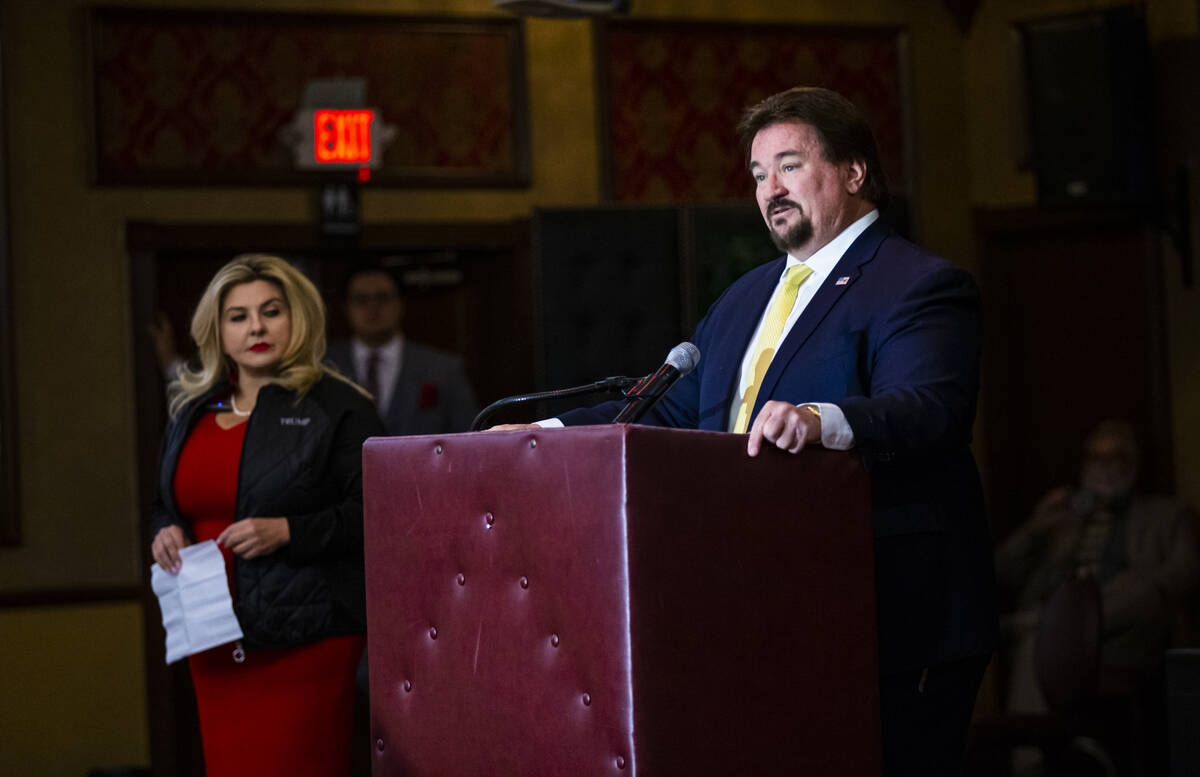 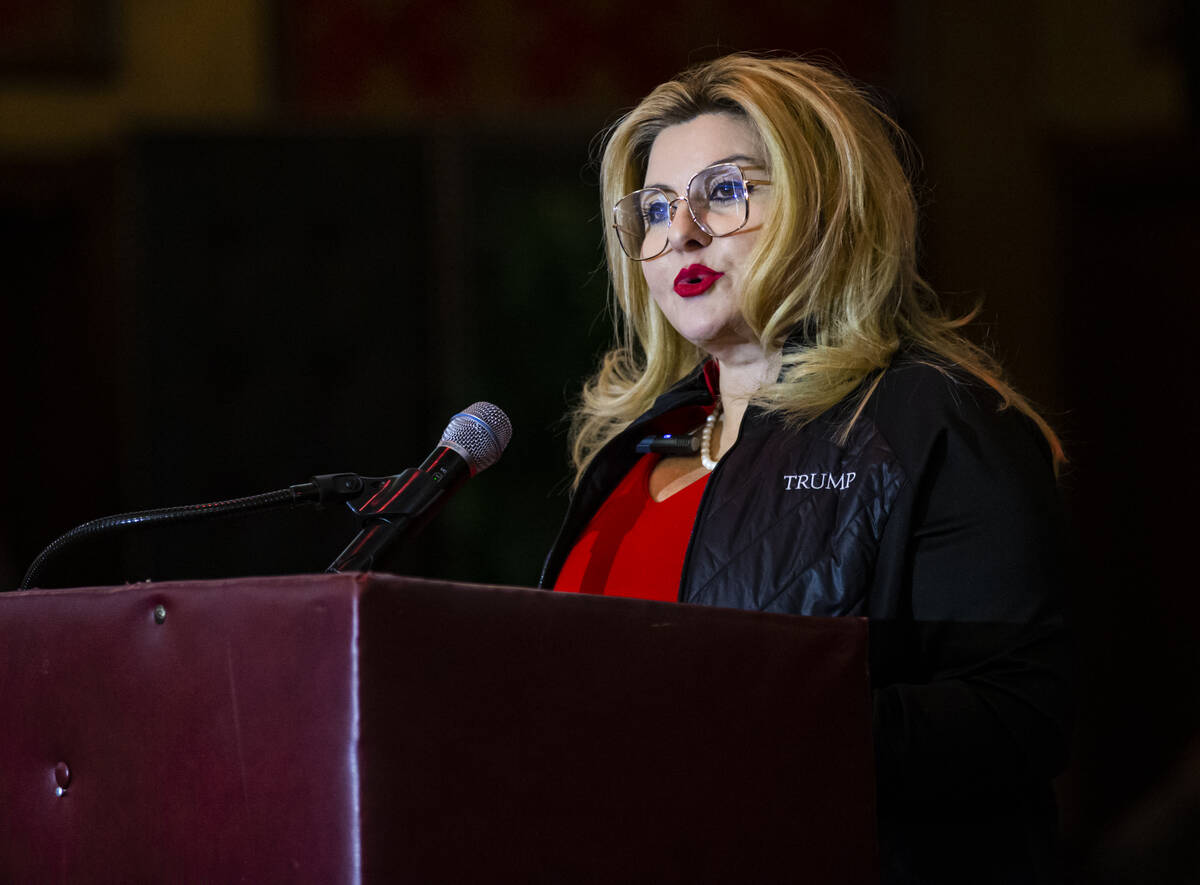 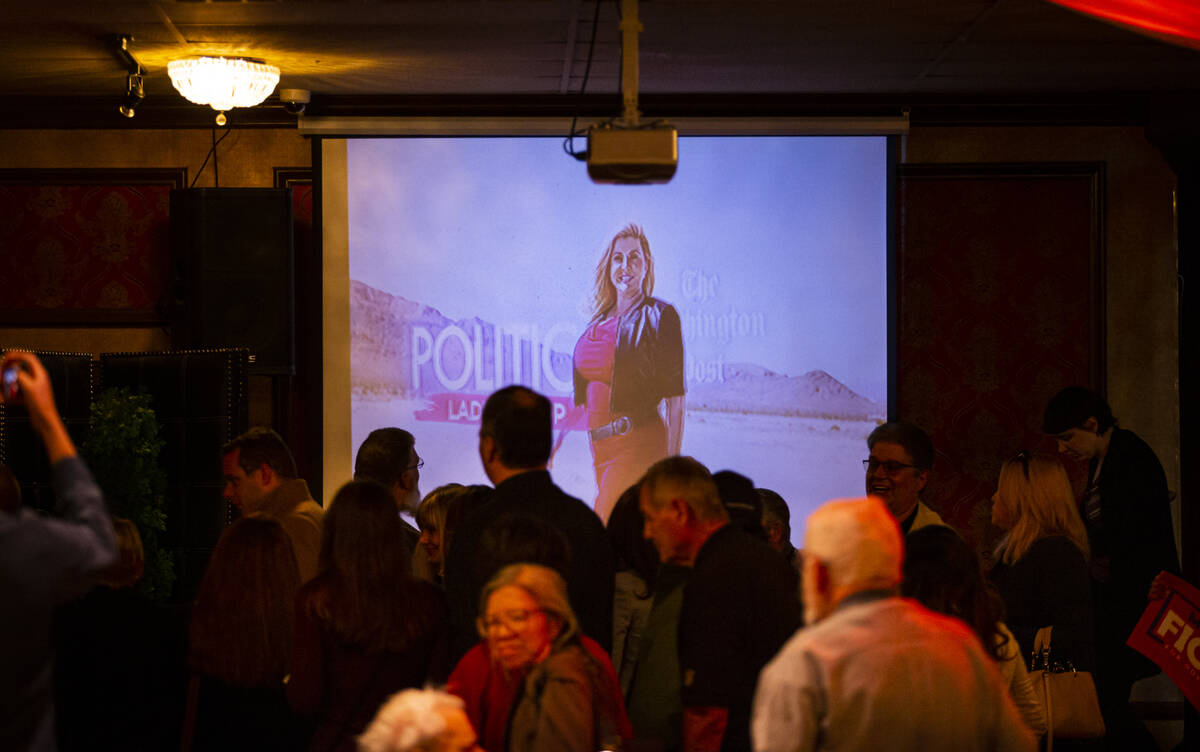 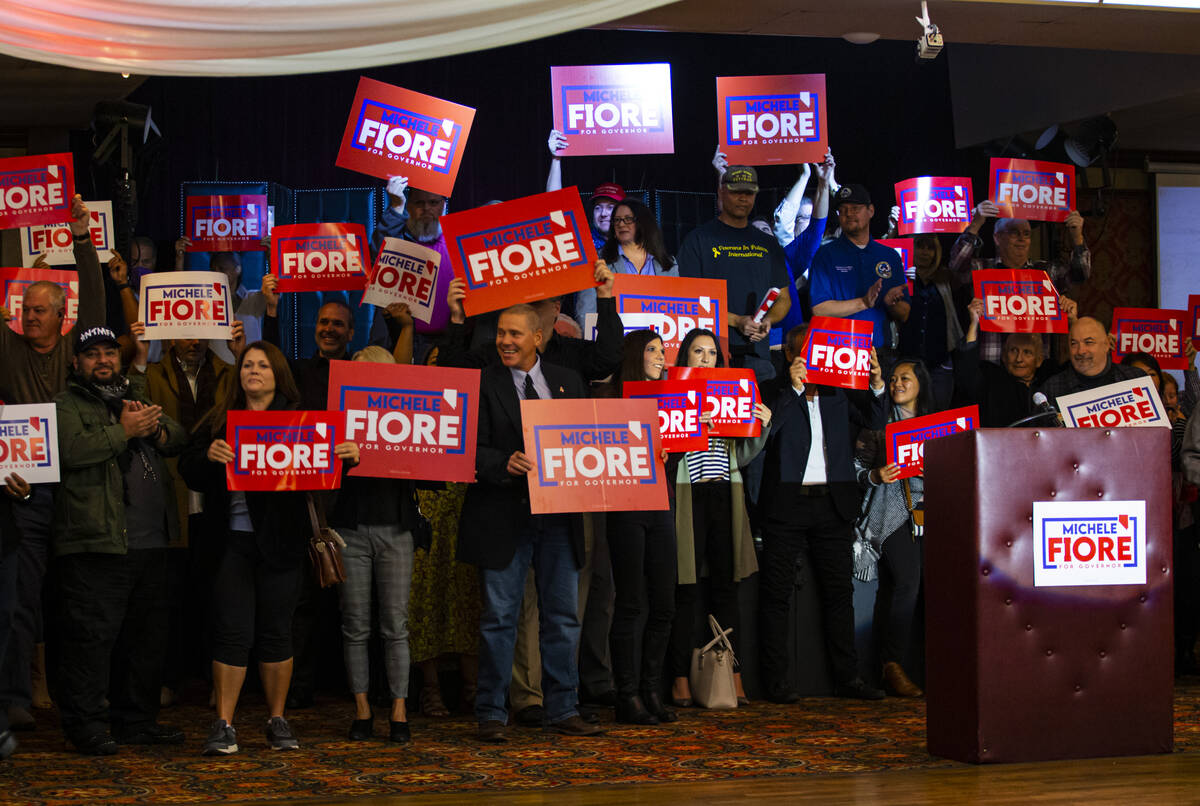 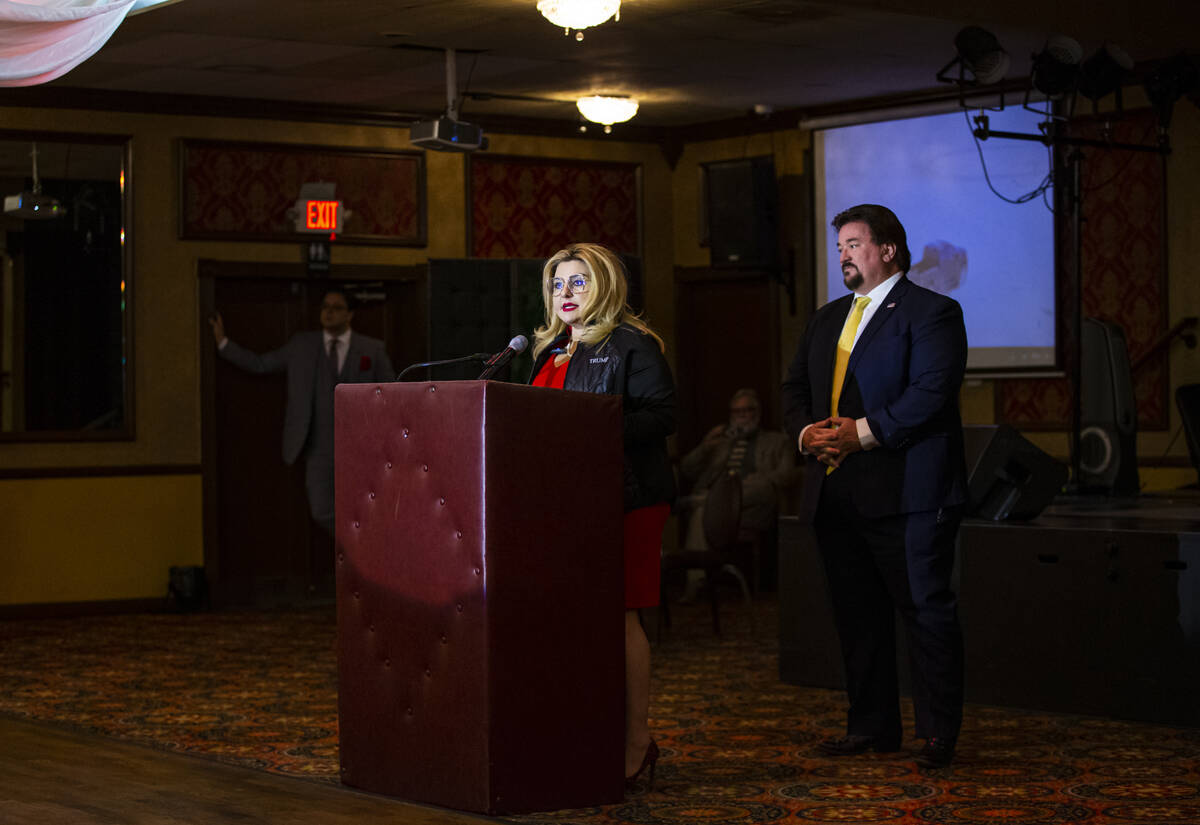 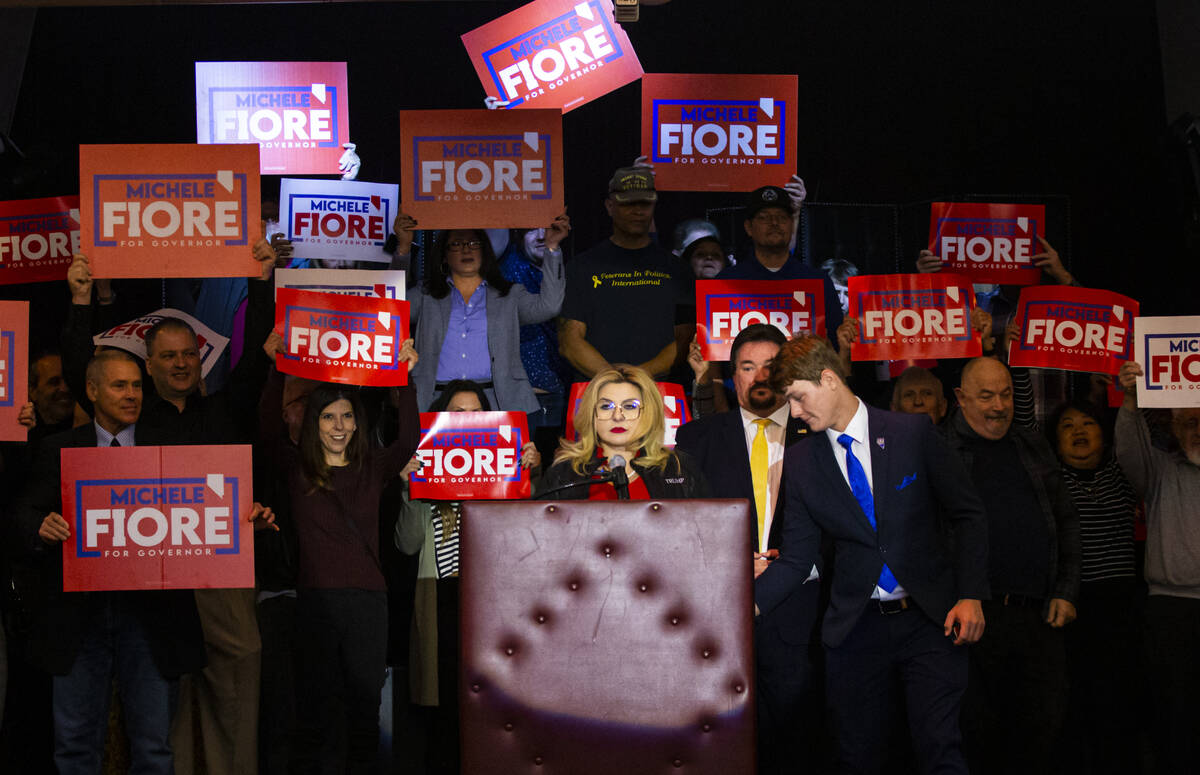 Las Vegas Councilwoman Michele Fiore said Tuesday she will seek the Republican nomination for governor, casting herself as a champion for conservative values amid a cascade of controversies that figure to be election cycle targets.

“Most of you know me as a fighter,” Fiore said during a brief news conference inside the Italian American Club restaurant. “And when I fight, I fight hard.”

Fiore, whose announcement was largely a surprise, has long leaned into her reputation as an anti-establishment lawmaker with a penchant for drawing national attention.

She was front and center during the Bundy standoff in Oregon. She posed with firearm-toting family members for a Christmas card and distributed it as a gift to constituents. She cursed at a GOP colleague on the Assembly floor. And she gave out calendars featuring her posing with all manner of firearms.

Fiore is under FBI investigation related to her campaign finances; fellow Councilwoman Victoria Seaman accused her of breaking Seaman’s finger in an assault inside City Hall; and Fiore survived a failed recall effort last year fueled in part by racially charged remarks she reportedly made regarding affirmative action.

“Baggage is a byproduct when you fight as loudly and proudly as someone like Michele Fiore,” campaign consultant Rory McShane said following the news conference, where Fiore declined to take questions from reporters.

McShane pointed to U.S. Sen. Mitt Romney’s failed presidential bid in 2012, saying that the Republican entered the race “clean as a whistle” but ran an ineffective campaign because he betrayed the values of the GOP and the conservative movement.

Fiore vowed to be an antithetical candidate to those who would seek to compromise with Democrats, making it clear that she has no intention of working with President Joe Biden’s administration if elected to Nevada’s highest office.

“That isn’t me. You’ll never hear me do that,” she said. “And if you want that, vote for one of my primary opponents.”

Prepared to ‘suffer the consequences’

Fiore has still not directly addressed the FBI investigation. There was a sense leading into Tuesday that her scheduled news conference might broach the subject because she had said her attorney would be present.

McShane said he had no personal knowledge of the FBI’s motives or whether there was still an ongoing investigation. Fiore and her nascent gubernatorial campaign sought to portray her as a broad target of a Democratic-led government.

McShane said that Fiore was prepared to “suffer the consequences” from taking on the Biden administration, claiming that the FBI was investigating conservative activists across the country and that the Justice Department had become “weaponized.”

In a video accompanying her campaign announcement, a gun-toting Fiore abruptly stops her Ford F-150 pickup in the middle of the desert, emerging to tout her conservative bona fides, including being among the first elected officials to endorse Trump. She then pauses to draw her semi-automatic handgun and shoot beer bottles representing vaccine mandates, critical race theory and election fraud.

“The Joe Biden administration is coming after me,” she says. “I’m Michele Fiore and I’m ready for the fight.”

McShane also waded Tuesday into the strife between Fiore and Seaman, downplaying the dissension between the two former close friends he described as “passionate people.” He said he hoped the matter would be soon “put to bed.”

Fiore, a Second Amendment supporter, laid out goals for her first day in office as governor: Ban critical race theory from being taught in schools; ban government-mandated vaccinations; and audit the 2020 presidential election.

In an email to supporters, Fiore again sought to connect her Nevada campaign with national politics.

“The failed Biden Presidency continues to drag America down, and Biden-backed socialist Steve Sisolak continues to follow his disgraceful leadership,” she said in the email. “It’s time we bring Real Conservative Leadership back to Nevada.”

McShane said the campaign has yet to announce any endorsements, but Fiore was introduced Tuesday by Nevada Republican Party Chairman Michael McDonald.

“Nevada needs a true fighter and we’re lucky to have that in Michele Fiore,” he said. McDonald also attended Heller’s campaign kickoff, a Lee fundraiser and a Lombardo campaign office opening. He has not endorsed any candidate for governor, however.

Fiore’s term on the council will expire in November 2022.

She was first elected to the Assembly in 2012, and served two terms before unsuccessfully running in the Republican primary for the 3rd Congressional District in 2016. She was elected to the City Council in 2017.

McShane said digital campaign advertising was rolled out on Tuesday, with other ads expected to start Wednesday. 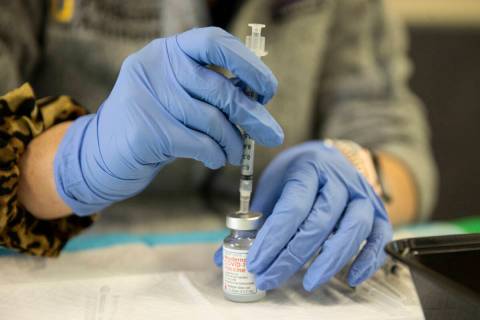