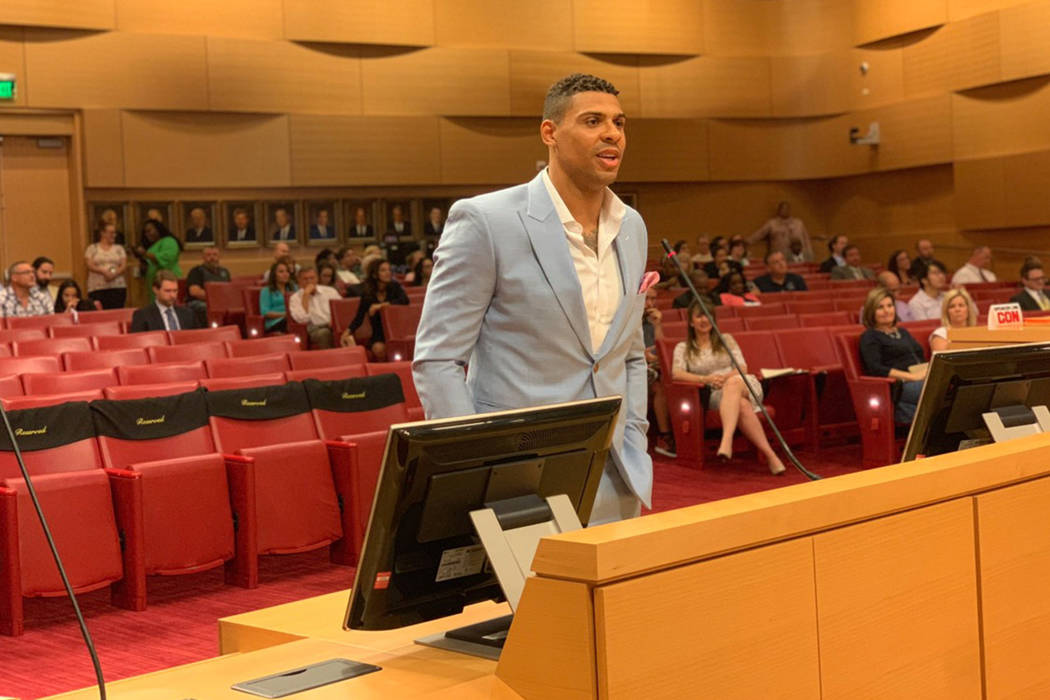 Golden Knights' Ryan Reaves appears during a city council meeting where they approved a liquor manufacturer license for his 7FiveBrewing company on Wednesday, July 17, 2019. (@CityOfLasVegas/Twitter)

“This company is not a celebrity endorsement. While it is about me, it’s also about the great people of Las Vegas,” Reaves told the council. “I’ve only been here for two years, and I’ve realized that the city has so much culture and so many stories to tell, and through our branding and marketing, we plan on telling a lot of those stories.”

The brewery will be located at 1510 S. Main St. in Ward 3, represented by new Councilwoman Olivia Diaz.

We can’t wait for @7FiveBrewing to open on Main Street! pic.twitter.com/1ygGbCCL5s

Diaz lauded Reaves and the Golden Knights for bringing excitement to the city.

“You’ve captured our hearts and you’ve brought us together as a city that’s more united,” she said, “so I really feel that you’ll bring that spirit as well to your new establishment.”

Reaves, a 10-year NHL veteran, said he planned to brew with Able Baker, a local businessman in the industry who developed Training Day Golden Ale in partnership with 7Five Brewing. The beer has been available during Knights games at T-Mobile Arena.

Reaves, 32, applauded city officials for their assistance as he sought the license and even ribbed Councilman Stavros Anthony for maintaining Detroit Red Wings memorabilia in his office: “I don’t think that belongs anywhere near Las Vegas,” he joked.

Mayor Carolyn Goodman first welcomed Reaves to speak to the dais, underscoring that officials were “so thrilled” he decided to open up a business in the city’s core.

“We are so happy and proud you’re making this investment in downtown,” she said. “You will never regret it, I can assure you.”