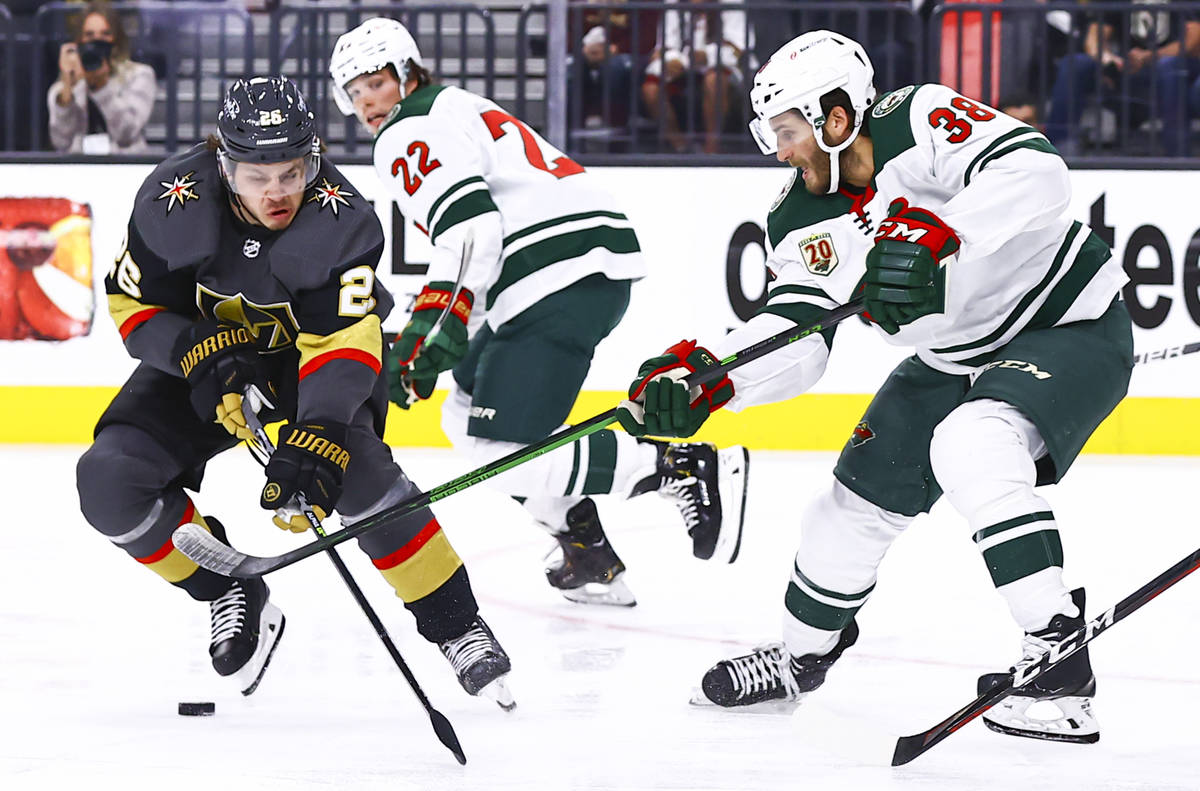 Golden Knights' Mattias Janmark (26) skates with the puck under pressure from Minnesota Wild's Ryan Hartman (38) during the second period of Game 5 of a first-round NHL hockey playoff series at T-Mobile Arena in Las Vegas on Monday, May 24, 2021. (Chase Stevens/rjmagazine) @csstevensphoto 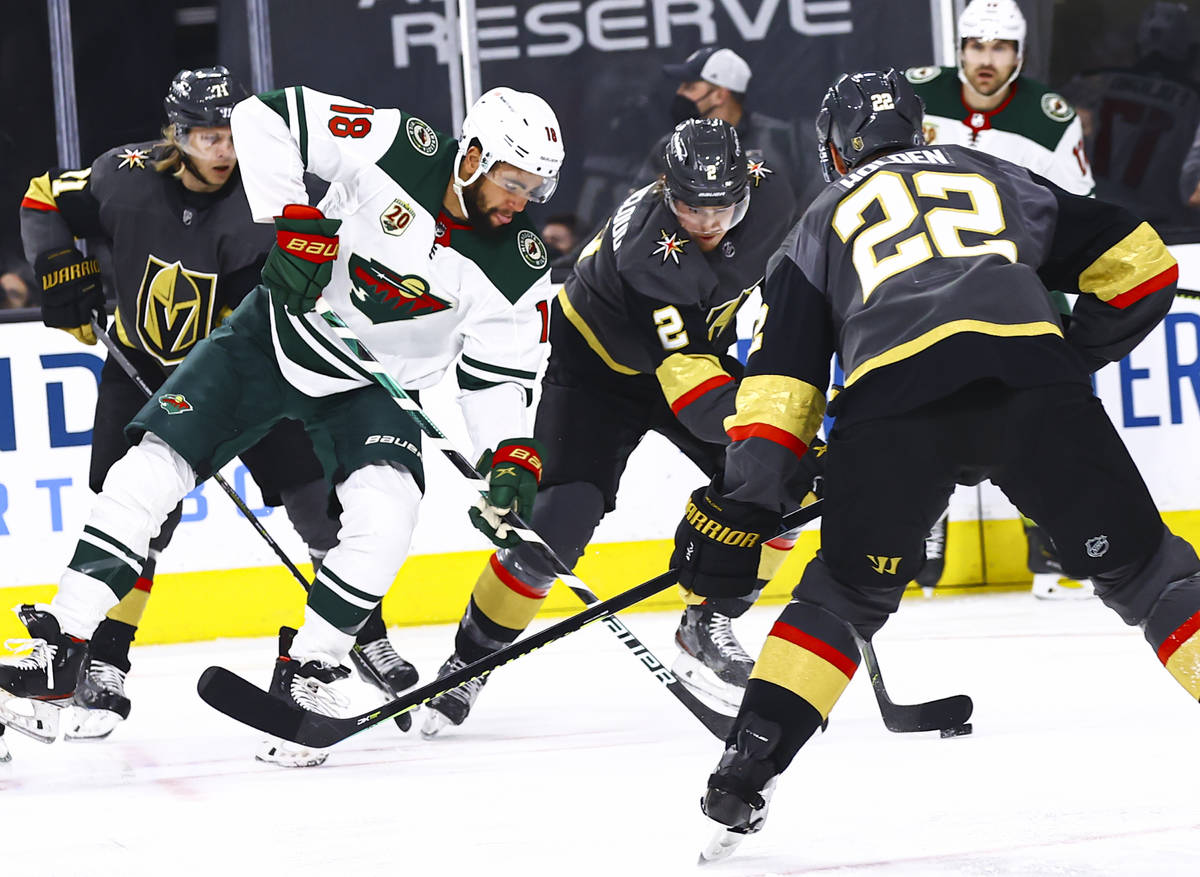 Golden Knights' defenseman Zach Whitecloud (2) skates with the puck under pressure from Minnesota Wild's Jordan Greenway (18) during the first period of Game 5 of a first-round NHL hockey playoff series at T-Mobile Arena in Las Vegas on Monday, May 24, 2021. (Chase Stevens/rjmagazine) @csstevensphoto 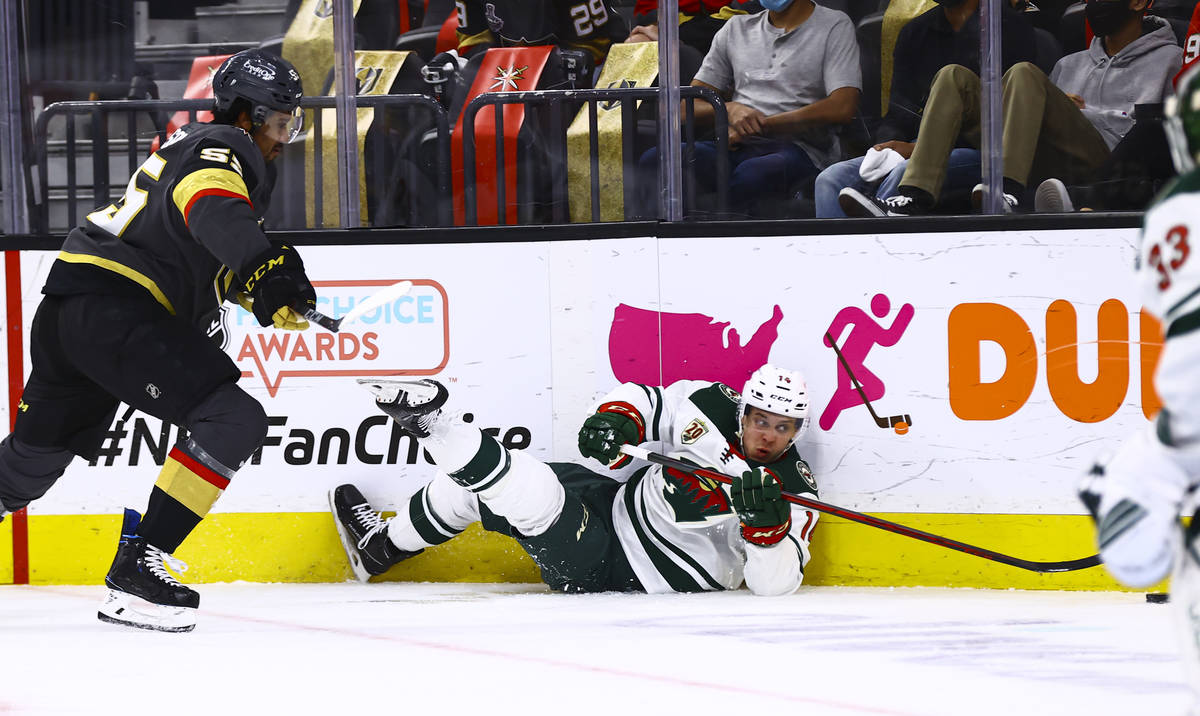 Minnesota Wild's Joel Eriksson Ek (14) gets tripped up in front of Golden Knights' Keegan Kolesar (55) during the second period of Game 5 of a first-round NHL hockey playoff series at T-Mobile Arena in Las Vegas on Monday, May 24, 2021. (Chase Stevens/rjmagazine) @csstevensphoto 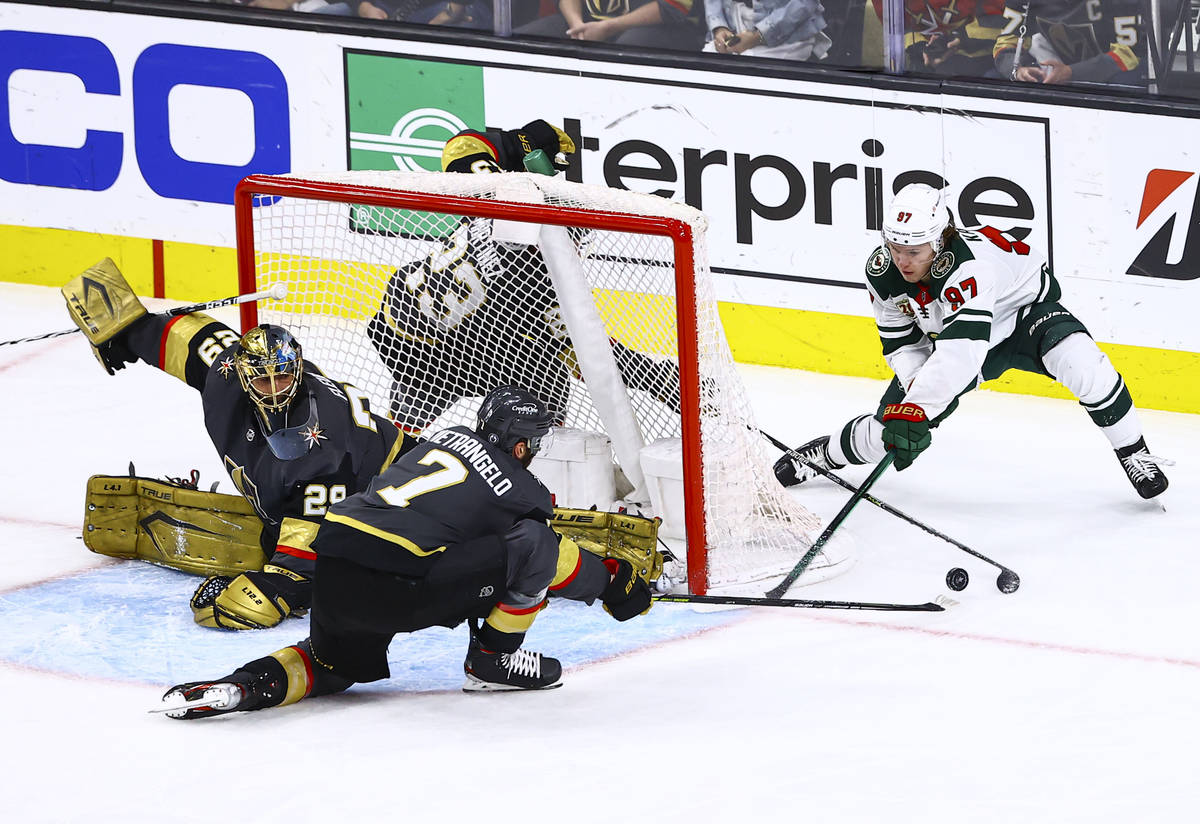 Minnesota Wild's Kirill Kaprizov (97) tries to get the puck past Golden Knights' Alex Pietrangelo (7) and Alec Martinez (23) as Marc-Andre Fleury (29) defends the net during the third period of Game 5 of a first-round NHL hockey playoff series at T-Mobile Arena in Las Vegas on Monday, May 24, 2021. (Chase Stevens/rjmagazine) @csstevensphoto

The Golden Knights walked out of T-Mobile Arena losers for the second time in three home playoff games Monday.

The team missed out on a chance to clinch a postseason series at home for the first time after a 4-2 loss to the Minnesota Wild in Game 5. Yet the Knights couldn’t walk out of the rink totally upset with themselves.

They had a 40-14 edge in shots on goal. They had a 36-15 edge in scoring chances, according to NaturalStatTrick.com. They did a lot of things well enough to win, and they’re hopeful a similar effort will get a different result in Wednesday’s Game 6 at Minnesota.

“I think if you replay that game, nine times out of 10 you probably win,” coach Pete DeBoer said. “We didn’t tonight. … We worked to put ourselves in a good spot. We had an opportunity. We worked hard. Didn’t get it done. We’ll regroup and look to get it done in Game 6.”

The one critique captain Mark Stone had for the Knights was their start.

They scored the first goal for the second time in the series, but Minnesota rookie Kirill Kaprizov tied the game 52 seconds later. The Wild were opportunistic from there and led 3-1 after the first period despite putting only seven shots on goal.

After that, there was little to nitpick for the Knights. They dominated possession in the final two periods and outshot Minnesota 33-7, including 22-1 in the second period. It was the first time the Knights allowed an opponent to put just one shot on goal in a regulation period of a playoff game.

“I thought we played a pretty solid game,” Stone said. “We had lots of chances. Could’ve easily tied that game up, could’ve easily been ahead. … The last 40 minutes, if we capitalize on a few chances I think we’re sitting here with a different outcome.”

Their 14 shots on goal were the fewest in team playoff history. It was tied for the fewest the Knights have allowed in a playoff game.

They will look to keep up that pressure as much as possible when they return to Xcel Energy Center on Wednesday. The team is 2-0 in the building in the series.

One more win and the Knights will be off to the second round to face the Colorado Avalanche.

Naturally, it was the second unit that scored Monday.

Defenseman Alex Pietrangelo set up defenseman Alec Martinez for a one-timer that made the score 3-2 with 10:17 left in the second period. It was the Knights’ second power-play goal of the series in 13 opportunities.

“That was a big goal for us,” DeBoer said. “Nice that the power play got it.”

DeBoer used his top defensemen a lot in the third period pushing for the game-tying goal.

Pietrangelo played 9:56 in the final period, and Theodore was on the ice for 9:34. The two often played together on a supercharged offensive first pair despite the fact that they usually play apart at five-on-five to spread the scoring throughout the lineup.

Most of the Knights’ forward lines posted good numbers.

The second line of Marchessault, Karlsson and Smith stood out most of all. They weren’t on the ice for a goal, but the Knights had a 23-4 edge in shot attempts when they were on the ice at five-on-five.

“I thought that was our best line,” DeBoer said. “I thought those guys were dangerous every time they were on the ice.”