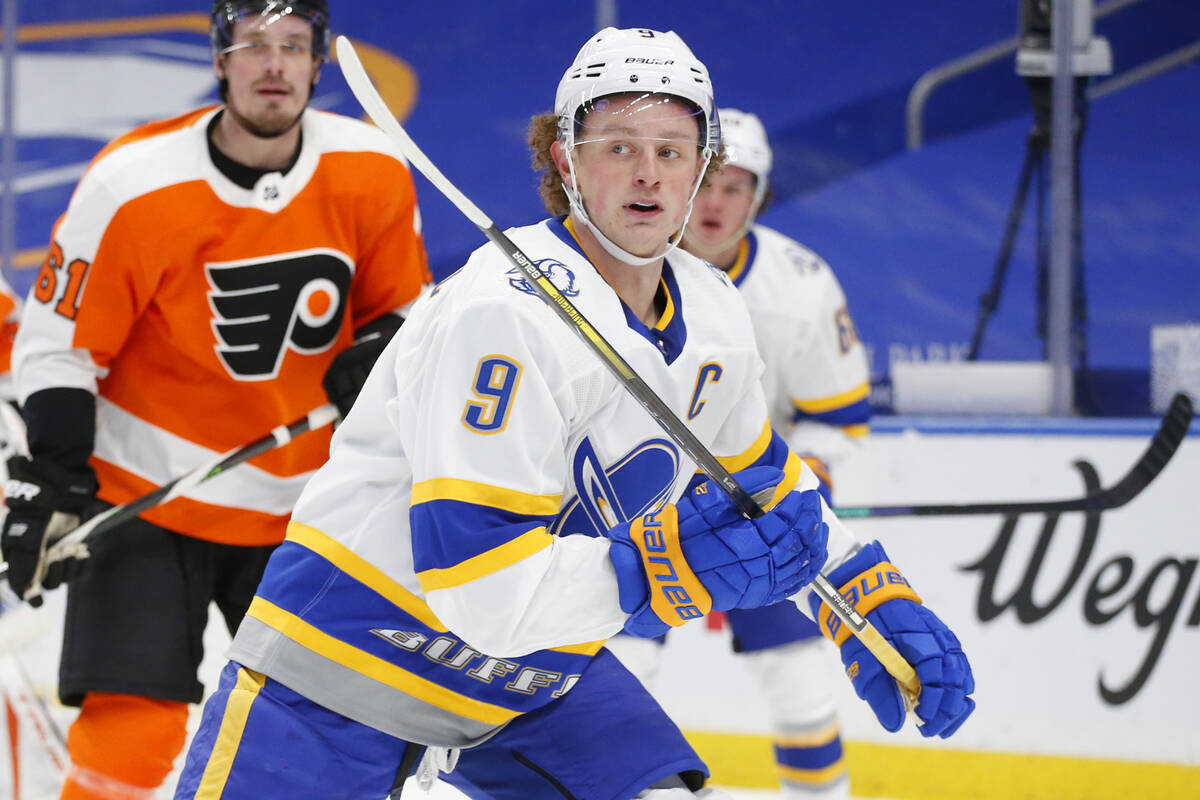 Buffalo Sabres forward Jack Eichel (9) is shown during the second period of an NHL game against the Philadelphia Flyers in Buffalo, N.Y., in this Sunday, Feb. 28, 2021, file photo. (AP Photo/Jeffrey T. Barnes) 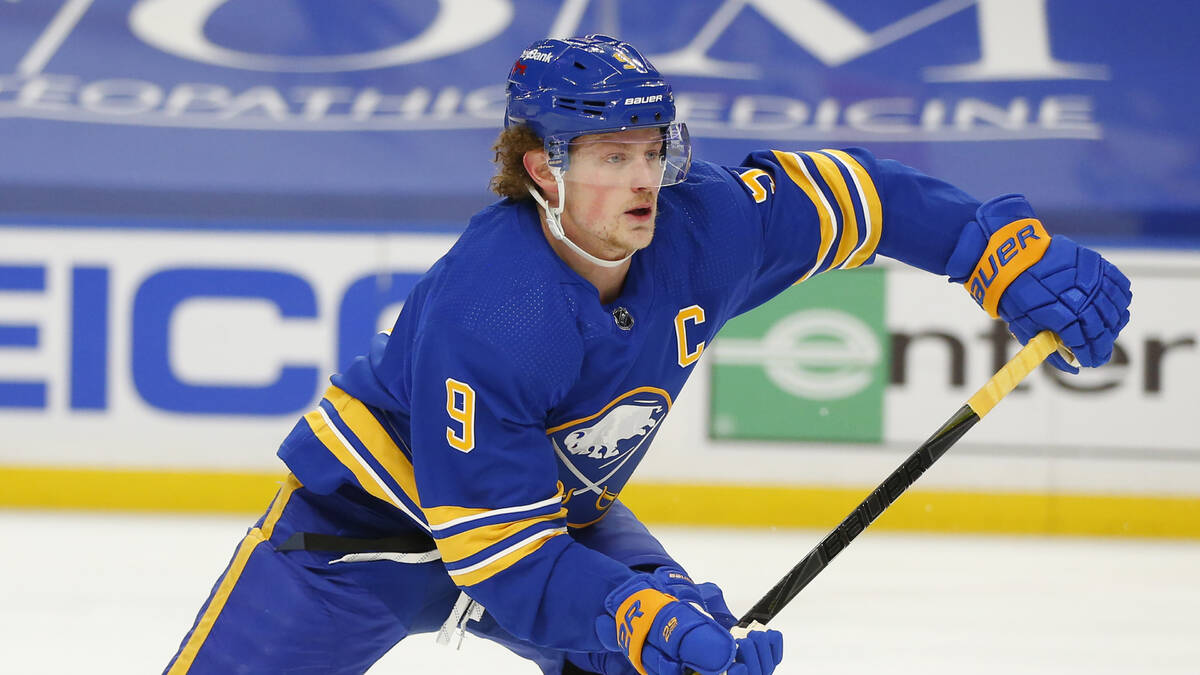 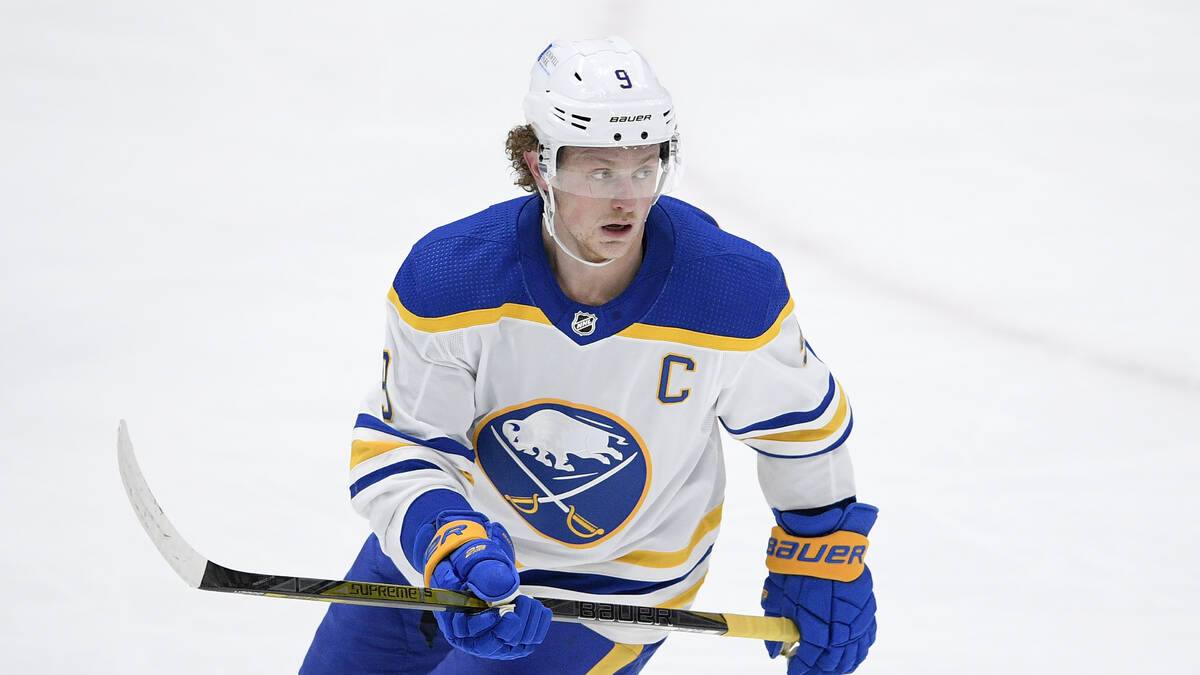 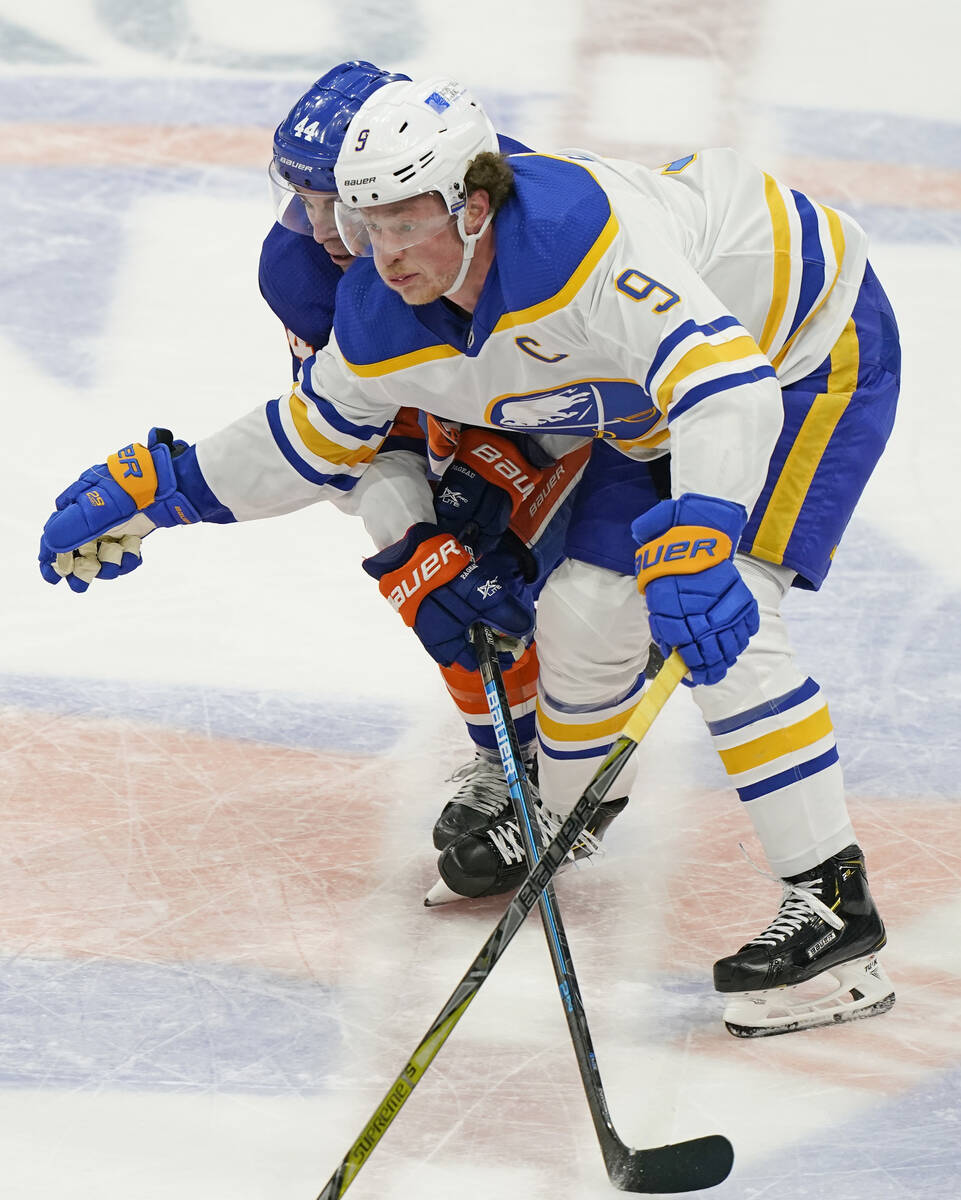 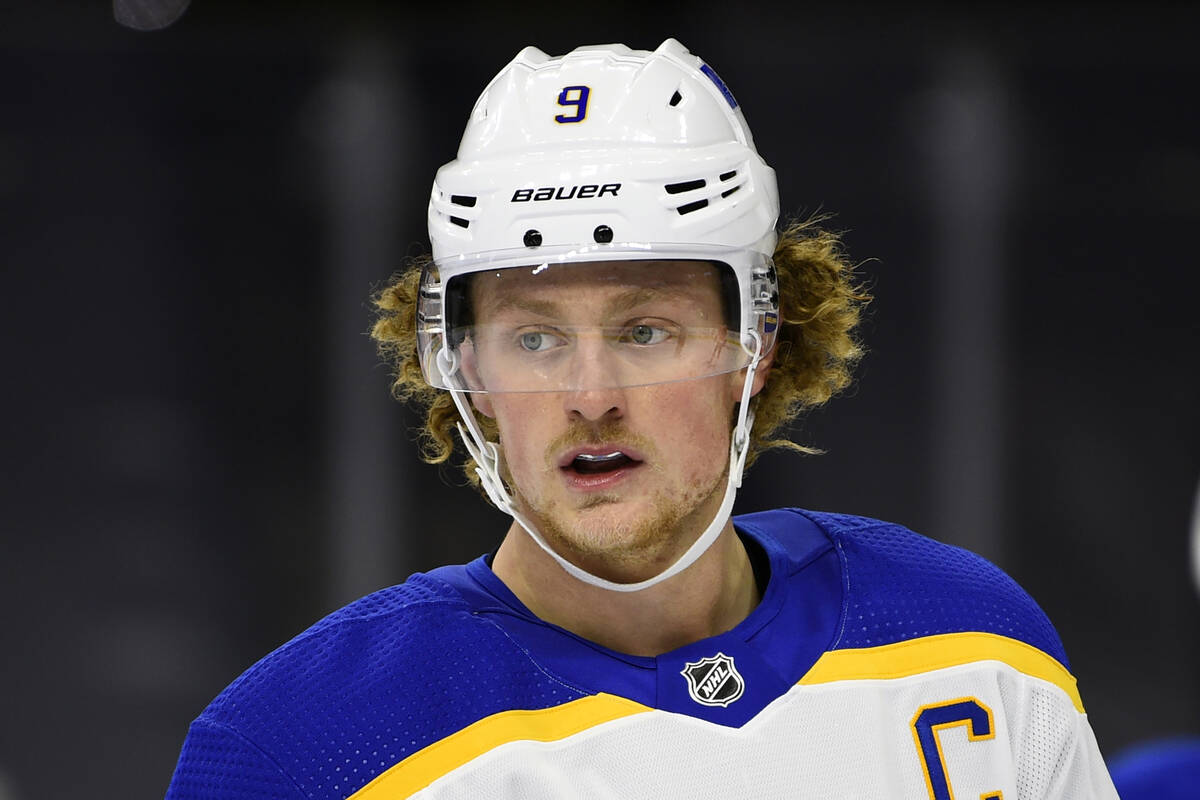 FILE - Buffalo Sabres' Jack Eichel is shown during an NHL hockey game against the Philadelphia Flyers in Philadelphia, in this Tuesday, Jan. 19, 2021, file photo. Eichel is scheduled to address the media during an end-of-season session on Monday, May 10, 2021, for the first time since being sidelined by a herniated disk in March. (AP Photo/Derik Hamilton, File)

The Golden Knights filled their need for a franchise center.

Jack Eichel became the latest high-priced standout to join the Knights in their pursuit of a Stanley Cup after a mammoth trade was completed with Buffalo early Thursday.

To land Eichel, the Knights sent forward Alex Tuch, forward prospect Peyton Krebs, a conditional first-round draft pick in 2022 and a second-rounder in 2023 to the Sabres. The Knights also receive Buffalo’s third-round pick in 2023 as part of the trade.

“I believe if you look at Stanley Cup champions, an elite center is certainly a big, big part of that,” Knights general manager Kelly McCrimmon said. “We weren’t in the market necessarily for another centerman. But this isn’t just another centerman.”

The Knights were willing to make the move despite Eichel’s $10 million salary cap hit through 2025-26 and uncertainty over the 25-year-old’s health.

Eichel is sidelined with a herniated disk in his neck and feuded with the Sabres’ organization for months over how to treat the injury. He will undergo an artificial disk replacement surgery, a procedure that has been performed on athletes in other disciplines but never an NHL player, according to McCrimmon.

The timetable for Eichel’s return is three to five months, McCrimmon said. That gives Eichel a slim chance of being ready to play for Team USA at the Olympics from Feb. 4 to 20. The Knights play at Buffalo on March 10.

“We have a lot of respect for the work that’s gone into this from his agent, from his second-opinion doctors, the specialists and experts that he’s seen in this field,” McCrimmon said. “We’ll defer to their wishes and respect the choices that they’re making based on knowing how much work they’ve done to prepare themselves for surgery.

The Knights’ need for a front-line scorer down the middle was apparent the past two postseasons when the offense and power play dried up in series losses to Dallas and Montreal.

Eichel, the No. 2 pick in the 2015 NHL draft behind Connor McDavid, will fill that hole when healthy. The native of North Chelmsford, Massachusetts, is a five-time 20-goal scorer and appeared in three straight All-Star Games from 2018 to 2020.

“He’s dynamic,” defenseman Alex Pietrangelo said. “It changes our matchups from the other team looking at us. Jack can change the game in the blink of an eye. That’s an element that you want on your team.”

Eichel was hurt March 7 when he was checked into the end boards by Casey Cizikas of the New York Islanders, ending his injury-plagued season.

He missed the final 33 games and finished with two goals and 18 points. In his postseason exit interview, Eichel said there was a “disconnect” between him and the team about how to treat his neck injury.

That led to a monthslong dispute that saw Eichel fire his agent and hire Pat Brisson, the father of the Knights’ 2020 first-round pick, Brendan Brisson, to help broker a trade to a team that would sign off on his artificial disk replacement surgery.

Eichel will wear No. 9 with the Knights.

“I really appreciate the Vegas Golden Knights organization giving me the opportunity to move forward with what I want to do and just get back to playing hockey and doing what I love,” he told ESPN. “Since I got hurt, it just seems like things haven’t really went my way, and that’s fine. People deal with adversity, and this is no different. It’s definitely been a long process.”

Tuch, originally from upstate New York, was labeled the Knights’ “X-factor” by coach Pete DeBoer because of his speed on the wing and ability to play up and down the lineup.

He underwent offseason shoulder surgery and was expected to be out until around the All-Star break in February. He was a key contributor for the Knights the past four seasons.

Tuch, the Knights’ player representative for the NHL Players’ Association, had 18 goals and 33 points in 55 games last season and had a career-high 20 goals and 52 points in 2018-19. During his career with the Knights, Tuch posted 61 goals and 139 points in 255 games.

“I want to thank The Foley Family, the rest of the Knights’ ownership group, and the team’s management for giving me the opportunity to put on the Golden Knights jersey,” Tuch, 25, wrote on his verified Twitter account. “Most of all, I want to thank all of my teammates that I’ve played with in Vegas. I am going to miss the great group they have there.”

Krebs, 20, was the Knights’ top prospect and 2019 first-round pick. He didn’t score in nine appearances this season and has one assist in 13 career NHL games.

With the Knights off to a slow start and decimated by injuries, the 2022 first-round pick sent to Buffalo is top-10 protected. Should the Knights not recover from their early struggles and land in the top 10 of the draft, all the picks involved in the deal would be delayed one season.

“The opportunity to get a guy like this is very rare,” DeBoer said. “There’s been no bones made about the fact that this organization wants to win, and they want to win now, and they’re willing to provide whatever resources to the players, the coaches, to the fans in order to chase a Stanley Cup.”