Golden Knights goaltender Marc-Andre Fleury moved into third on the NHL's all-time wins list when the team took a victory over the Wild on Wednesday. (Heidi Fang/Las Vegas Review-Journal) 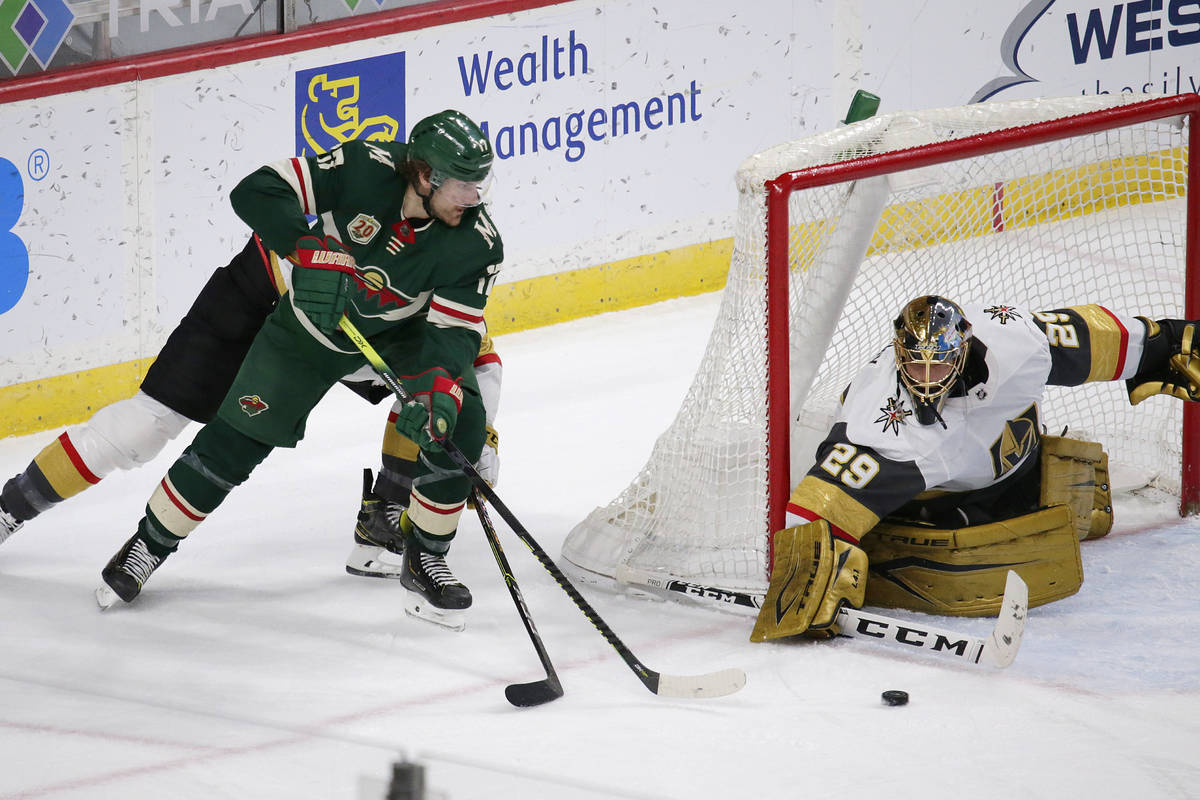 Hockey is a team sport, but there’s no position more important than goaltender.

The puck, literally, stops with them. Their job day after day is to make saves, control the game and give their team the best chance to win. When they do that, they’re heroes. When they don’t, they’re scapegoats. That makes it a position at which players better be as tough mentally as they are physically.

Naturally, it takes a special player to hang around the crease for a long time. To be willing to have a piece of vulcanized rubber thrown at them game after game and keep coming back.

Golden Knights goaltender Marc-Andre Fleury happens to be one of those players. The 36-year-old keeps climbing the NHL’s all-time wins list and is having one of the best seasons of his career.

There are only a few goaltenders in NHL history who have come close to what he has accomplished. Here’s a look at the company Fleury is a part of, ranked by career wins:

Brodeur also was plenty good once he got in the crease. The New Jersey Devils won the Jennings Trophy for the fewest goals allowed five times in his 21-year tenure with the team. They also won the 1995, 2000 and 2003 Stanley Cups.

Brodeur is also one of the best puck-handling goaltenders ever and scored three of the 15 goalie goals in league history.

What makes Roy’s career so impressive is he had great, lengthy tenures with two organizations.

He spent 12 years with the Montreal Canadiens and added to the history of an already great franchise. He won four Jennings Trophies there, three Vezinas, two Stanley Cups and two Conn Smythes for playoff MVP.

Then he went to Colorado and had another incredible eight seasons. He added another Jennings, another Conn Smythe and was part of the only two Stanley Cups in franchise history. No wonder his number 33 has been retired by both teams.

Roy’s butterfly style of goaltending also influenced how the position was played for years to come.

It’s hard to imagine the kind of pressure and expectations Fleury faced from a young age.

He became the third goaltender in NHL history to be picked No. 1 overall in the draft in 2003. No netminder has gone that high since. He has lived up to the hype.

Fleury rarely has been dominant, but he’s been consistent and reliable throughout his career. The only time he led the league in a statistic was in 2014-15 when he had 10 shutouts. He also never has been a Vezina finalist.

It hasn’t mattered. His teams have won, usually a lot of games, with him in net. His athleticism has led to a number of highlight saves. And his smile and positive attitude are infectious.

It’s crazy to think about what Luongo’s numbers would have been like if he had been on better teams.

He played 11 seasons for the Florida Panthers, and they made the playoffs once. The most successful years of his career came with the Vancouver Canucks, who made the playoffs six of the seven seasons he finished with them. He was a Hart and Vezina finalist in Vancouver, won a Jennings Trophy and briefly became a team captain. He was the first goalie to wear a “C” since the 1947-48 season.

The Canucks made the Stanley Cup Final once under Luongo in 2011 but lost Game 7 to the Boston Bruins. His 1,044 games played rank second all time behind Brodeur.

Belfour is an incredible success story and one of hockey’s ultimate winners.

The netminder was undrafted but authored an incredible career while playing for five teams. He’s one of two players who have won an NCAA championship, Olympic gold medal and Stanley Cup (forward Neal Broten is the other).

He’s most remembered for his eight seasons in Chicago, where he won the Calder Trophy, three Jennings Trophies and two Vezinas. He won the 1999 Stanley Cup with the Dallas Stars after outdueling a number of other greats. The Stars beat Hall of Famer Grant Fuhr and the Edmonton Oilers in the first round, Roy and the Avalanche in the conference final and Dominik Hasek and the Buffalo Sabres in the final. Belfour had a .930 save percentage in that postseason.