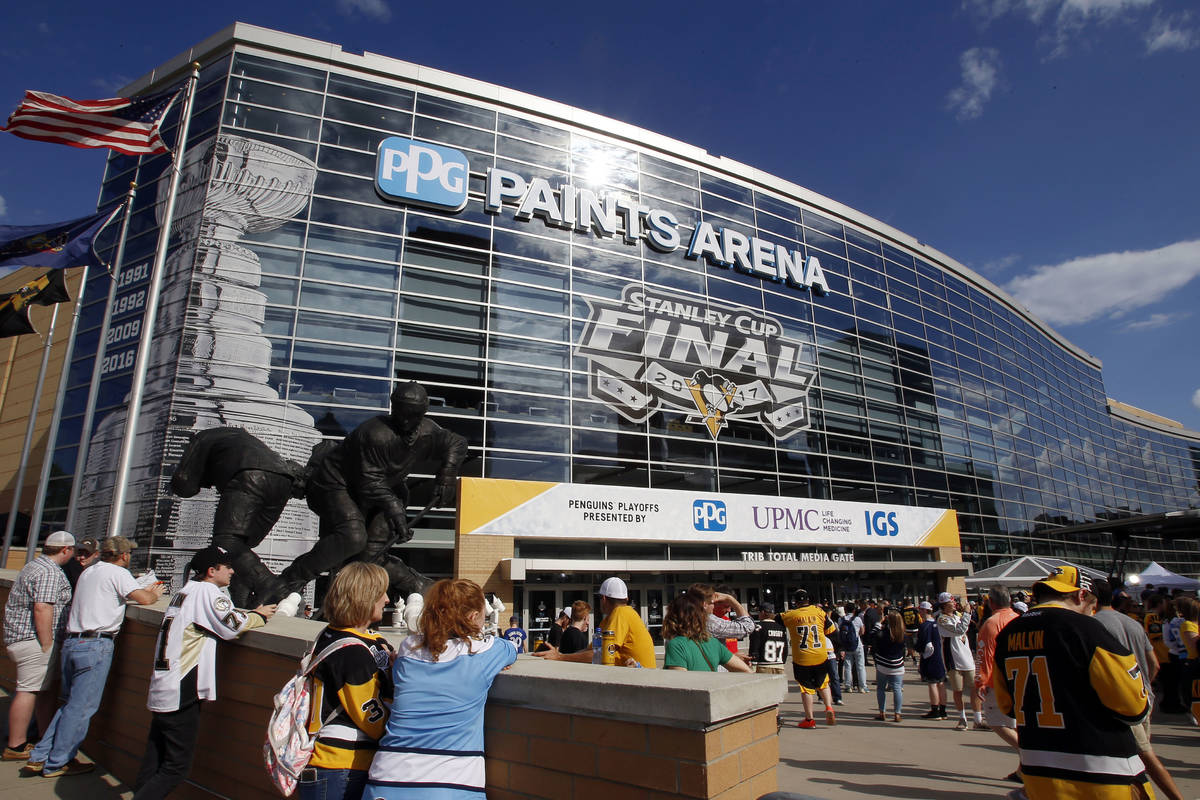 Fans wait outside PPG Paints Arena for Game 1 of the NHL hockey Stanley Cup Finals between the Pittsburgh Penguins and the Nashville Predators, Monday, May 29, 2017, in Pittsburgh. (AP Photo/Gene J. Puskar)

Las Vegas’ competition to be a hub for the NHL postseason dwindled for the second straight day.

The Pittsburgh Penguins announced Tuesday that their home market would not be one of the league’s two hub cities. And reports indicated that Dallas also was removed from consideration. The Stars did not respond to requests for comment.

The news leaves the NHL with six of its 10 finalists remaining: U.S. cities Las Vegas, Chicago and Los Angeles, and Canadian cities Edmonton, Toronto and Vancouver. The Athletic was the first to report Dallas’ elimination and the final six locations.

The Columbus Blue Jackets said Monday that their market was out of the running. And The Athletic reported that Minneapolis/St. Paul was eliminated Monday, too.

The Wild deferred comment to the league on Tuesday. Deputy commissioner Bill Daly said in an email to the Review-Journal on Monday the NHL wouldn’t have any comment “until there is something to announce.”

The NHL intends to resume its season this summer with the hub cities hosting the 24-team Eastern and Western Conference postseason. The league paused its season March 12 because of the coronavirus pandemic.

Las Vegas remains a strong contender for one of the hubs. The valley has major-event experience and plenty of hotel rooms. MGM Resorts International plans to keep some of its hotels closed so that one or more could house the NHL’s sizable traveling party.

Las Vegas also has a good working relationship with the league. The NHL has held its awards show in the valley 10 of the previous 11 years, and it was scheduled to return in 2020 until it was postponed in March because of the pandemic. And the league approved the Golden Knights as an expansion team in 2016.

It’s unclear whether the Knights would be allowed to play at T-Mobile Arena or sent to the other hub if Las Vegas is selected. Three of the other remaining options — Chicago, Edmonton and Vancouver — are also home to Western Conference tournament teams. If one of those three is selected along with Las Vegas, one team will get to play in its home arena.

By contrast, the Canadian province of British Columbia, where Vancouver is located, reported 13 new cases over the preceding day Tuesday despite having more than double Clark County’s population. Vancouver is no stranger to holding NHL events, either, having hosted the 2019 draft.

The provinces of Alberta (Edmonton) and Ontario (Toronto), while not quite on British Columbia’s level, also have low testing numbers based on their population compared to the American competition.

It also would be cheaper for the NHL to play in Canada. One U.S. dollar was worth 1.35 Canadian dollars Tuesday, according to the Bank of Canada.

No matter where the league decides to play, it still needs to agree on health and safety protocols with the players association. The sides need to reach a deal before their targeted date of July 10 for the beginning of training camps.

The importance of those guidelines has heightened in recent days. The Tampa Bay Lightning closed their facility temporarily Thursday after three players and additional staff members tested positive for COVID-19.

The NHL said Friday that 11 players of the more than 200 who have been tested multiple times since June 8 have had positive results.