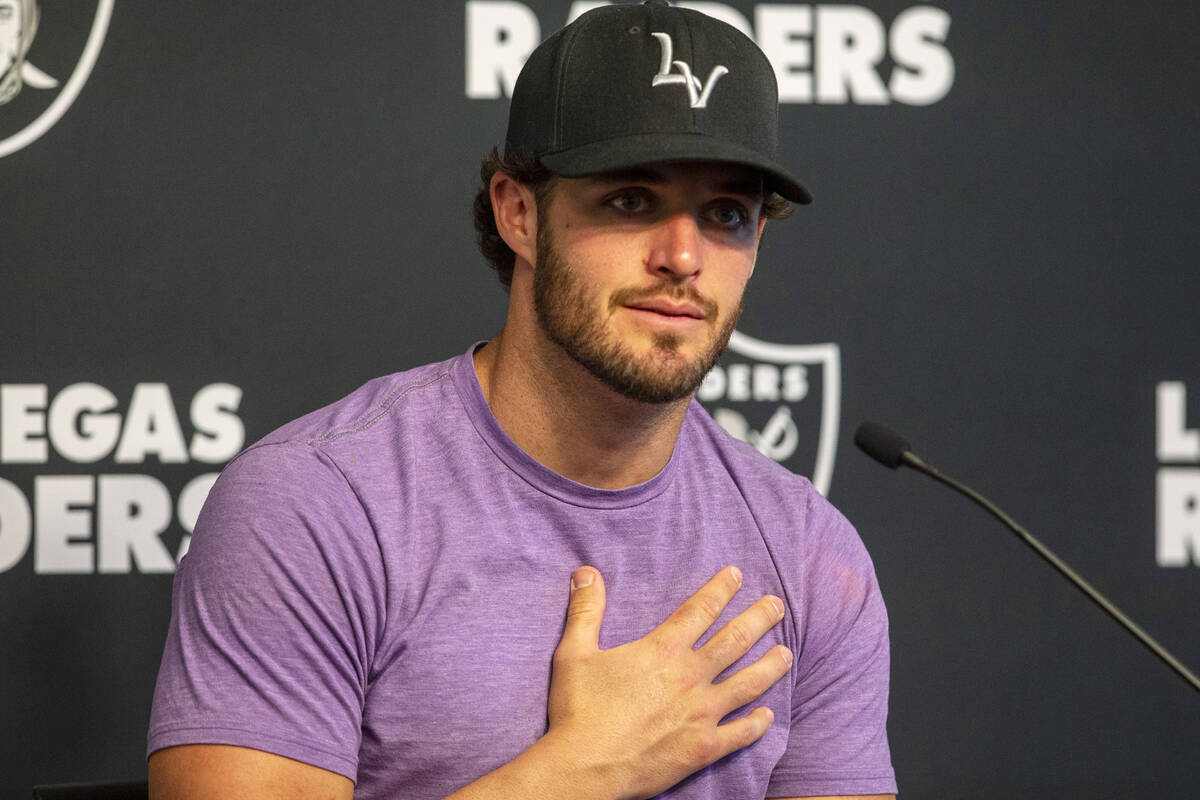 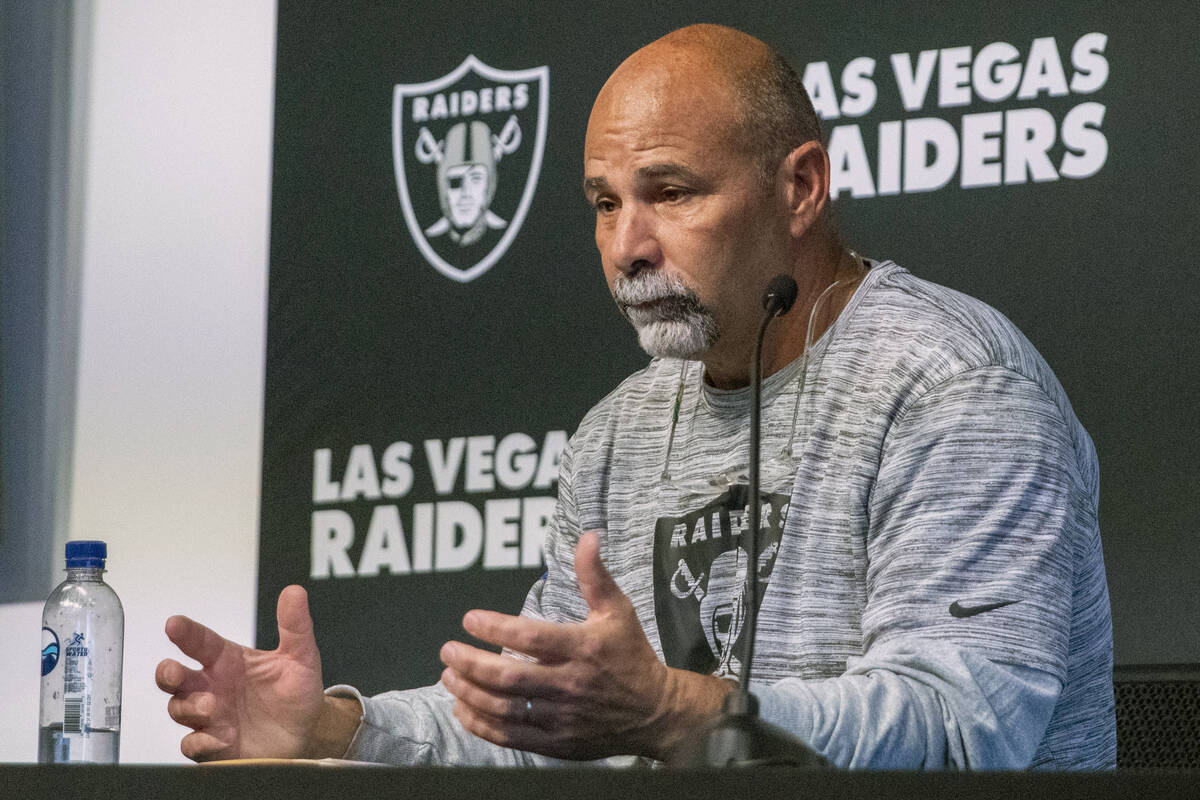 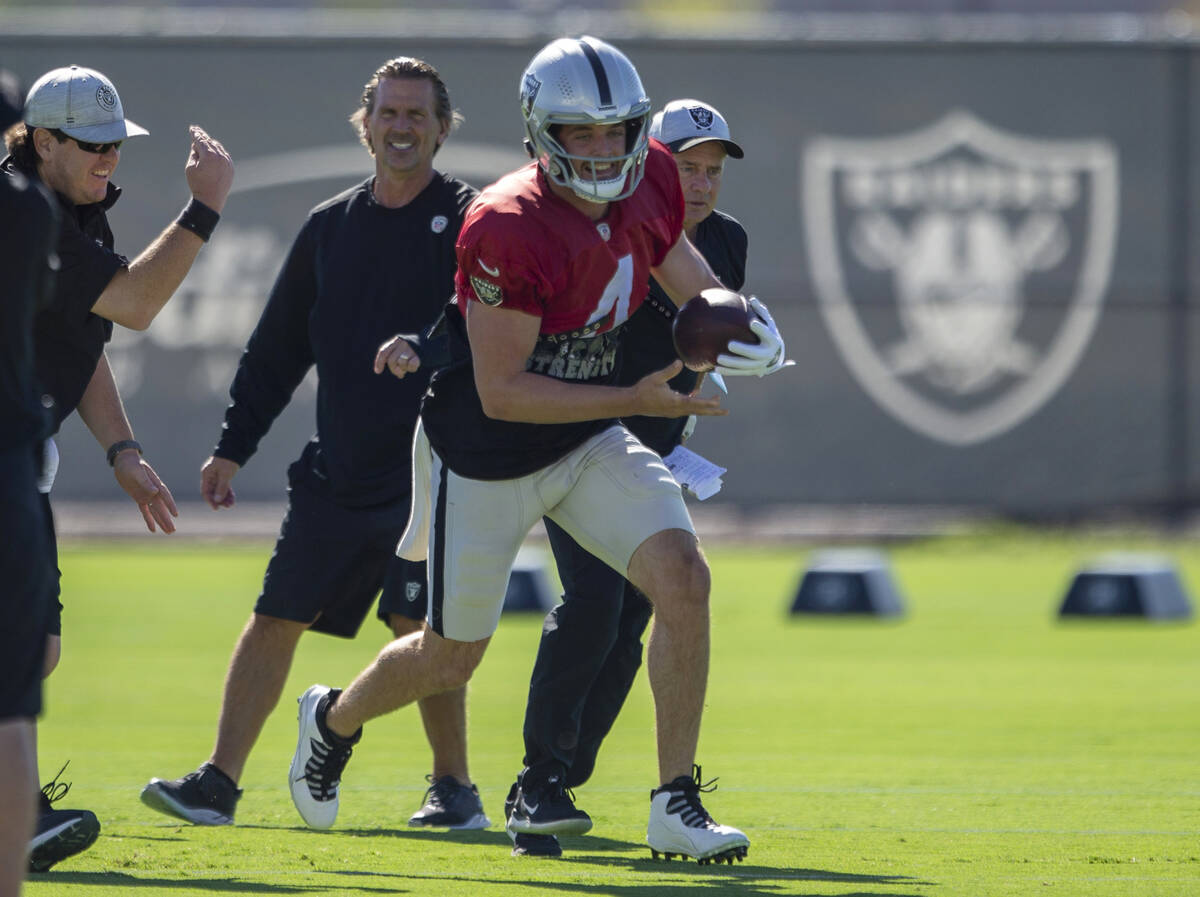 Raiders quarterback Derek Carr (4) smiles as he carries the football with Raiders offensive coordinator Greg Olson looking on during a practice session at the Raiders Headquarters at the Intermountain Healthcare Performance Center on Wednesday, Nov. 3, 2021, in Henderson. (Heidi Fang/Las Vegas Review-Journal) @HeidiFang 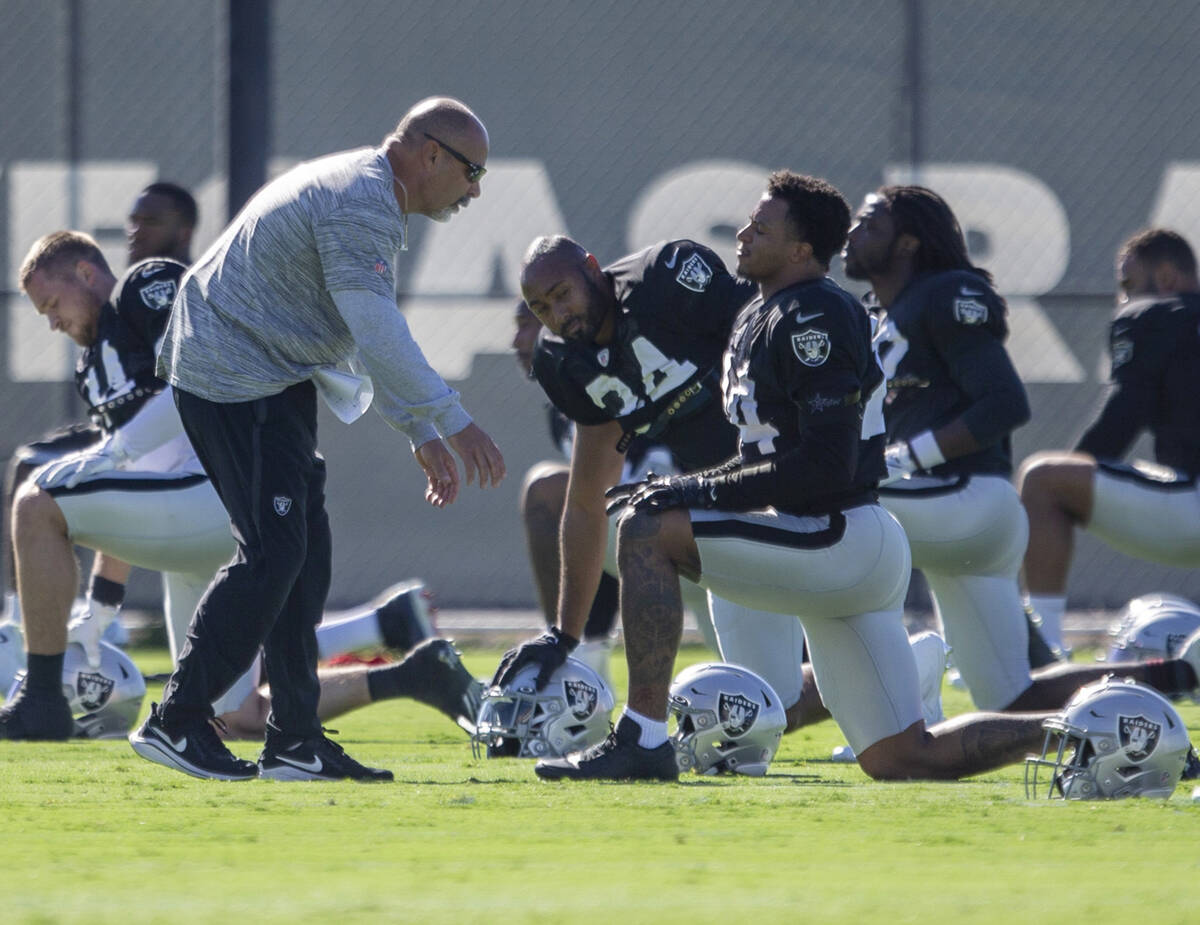 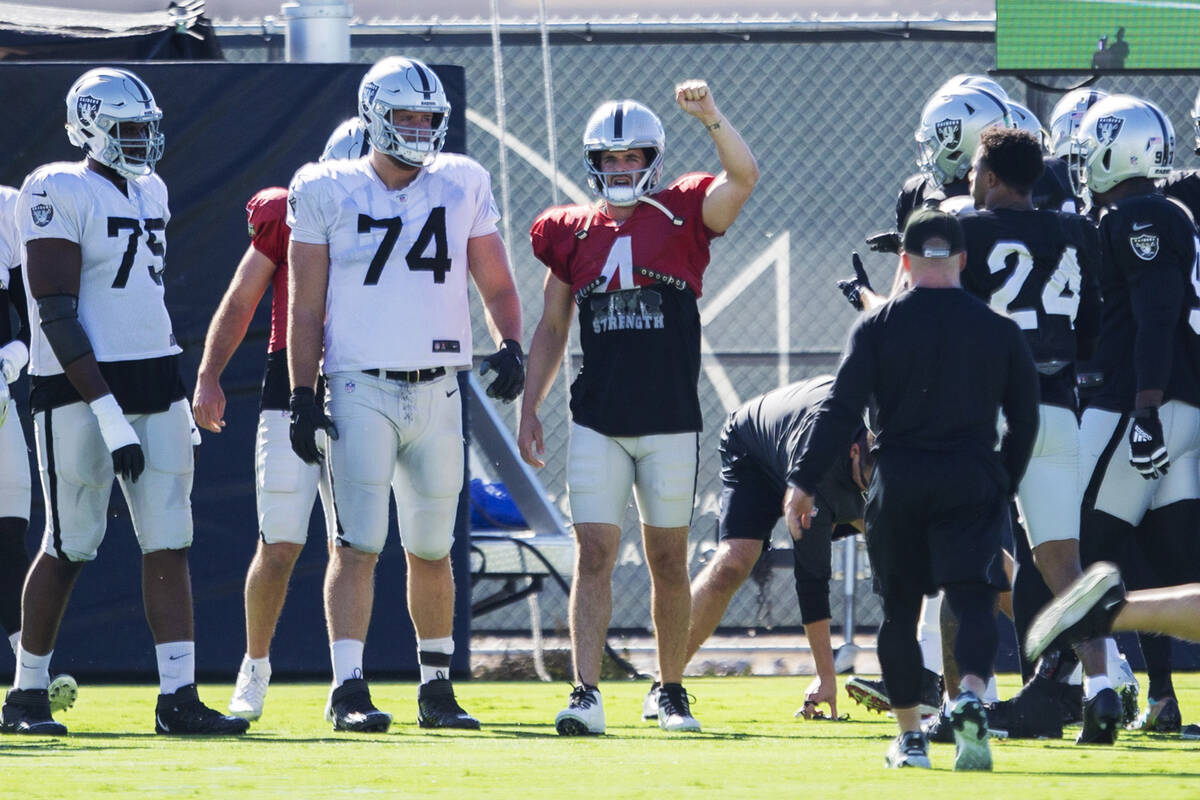 Raiders quarterback Derek Carr (4) raises his fist as players come to a huddle during a practice session at the Raiders Headquarters at the Intermountain Healthcare Performance Center on Wednesday, Nov. 3, 2021, in Henderson. (Heidi Fang/Las Vegas Review-Journal) @HeidiFang 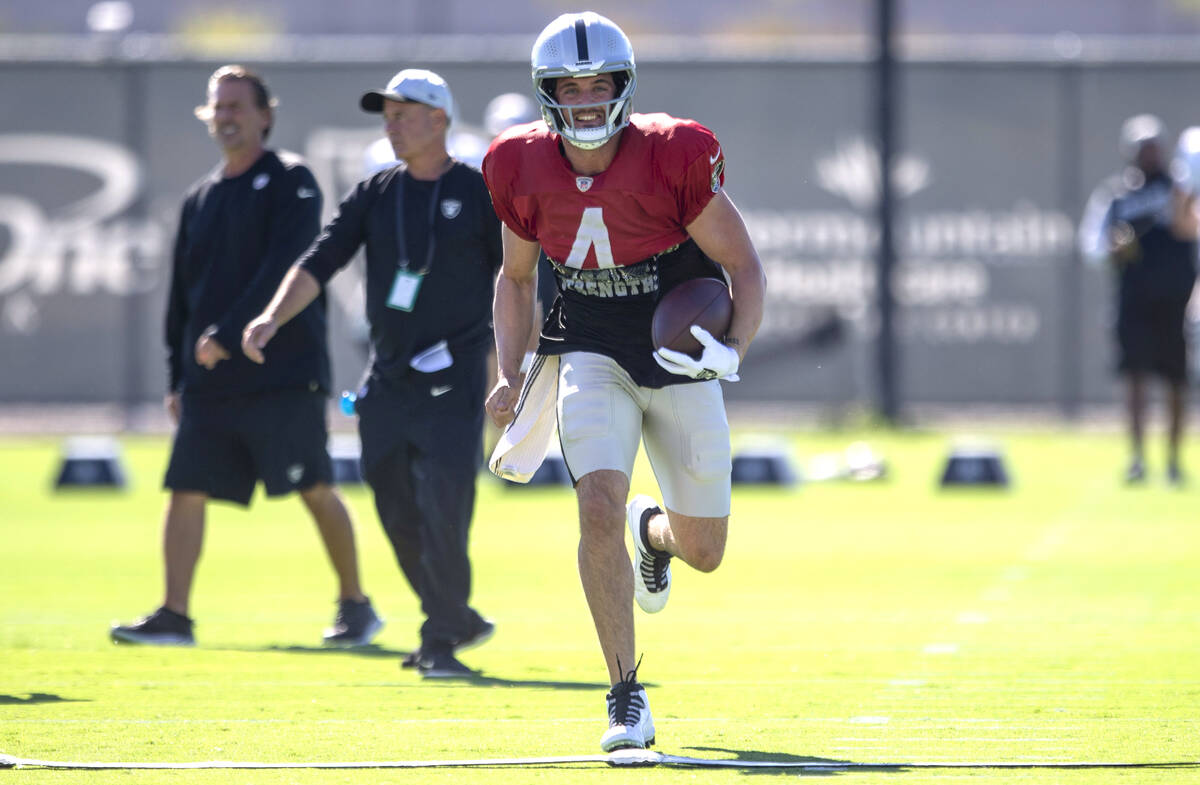 Raiders quarterback Derek Carr (4) smiles as he runs during a practice session at the Raiders Headquarters at the Intermountain Healthcare Performance Center on Wednesday, Nov. 3, 2021, in Henderson. (Heidi Fang/Las Vegas Review-Journal) @HeidiFang 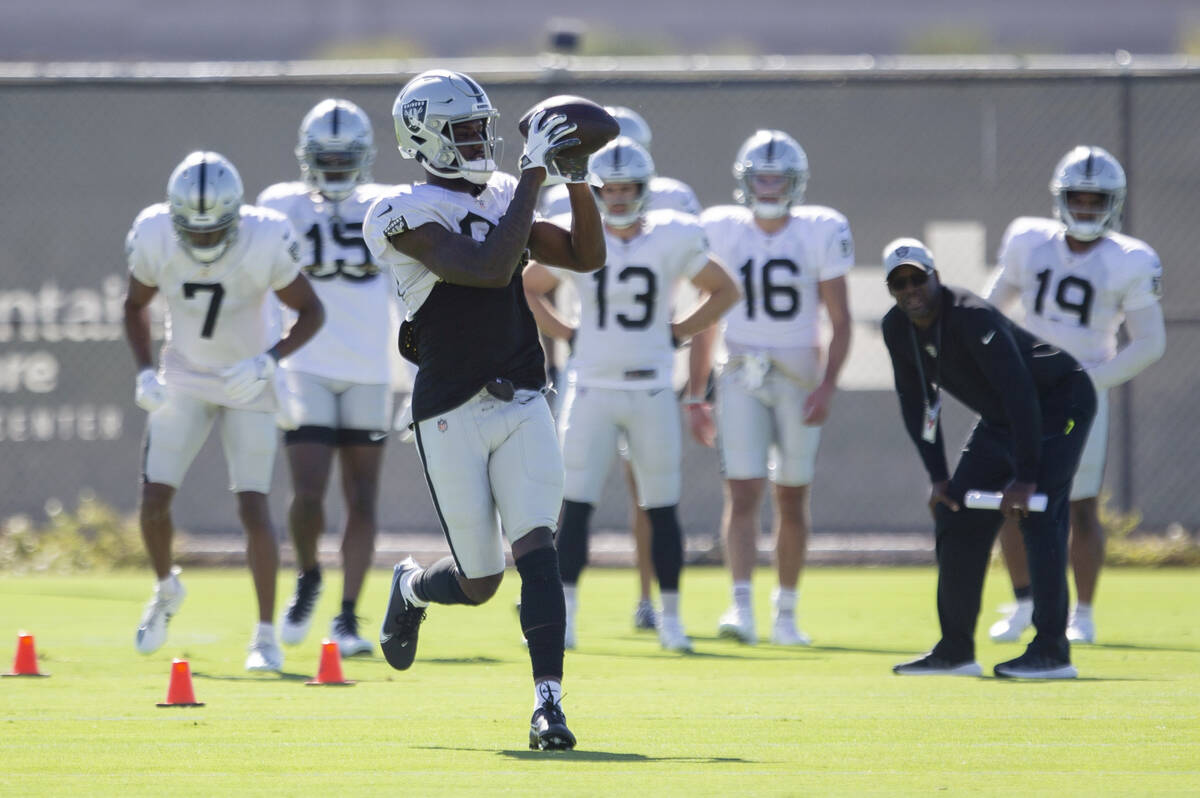 Just before midnight on Monday, Derek Carr got a group-chat text from Raiders teammate Henry Ruggs, who was enjoying a night out at Top Golf in Las Vegas.

In it, Ruggs asked Carr and Hunter Renfrow to help him out with his golf swing.

Seven or so hours later, Carr woke up to the reports that Ruggs was involved in a fatal car crash that left a 23-year-old woman dead. Ruggs was eventually arrested and faces charges of DUI resulting in death and reckless driving. Not long after, his Raiders career was over when the club released him.

For the rest of the day, and into Wednesday, Carr was left to wonder if he didn’t make it clear to Ruggs that he could have texted him at any hour of the day or night if he needed a ride home because he was too impaired to drive.

It’s a promise Carr makes to all his teammates, no questions asked. Carr was still beside himself Wednesday, wondering if he wasn’t clear enough to Ruggs. “Did I not let him know that I’d be there for him at 3 a.m.?” Carr said.

Ruggs never reached out, of course, and in a matter of hours a young life was lost and a promising football career was likely over. Ruggs now faces the real possibility of prison time and a lifetime of regret over an egregious act of irresponsibility.

His coaches and teammates were stunned.

“To be perfectly frank, I don’t really know if I can put into words the emotional feelings that certainly I went through and certainly I can’t speak for our players or our coaches, or our owner or our organization,” interim head coach Rich Bisaccia said. “I just know that for me as a parent and a person that cares about young people and that deals with young people every day, I really don’t know if I can quantify what the emotions are.”

For Carr, it was almost too much to process.

Yet that is what he and the Raiders are now asked to do.

For the second time in a month following the Jon Gruden drama and now this, Carr and the Raiders must somehow separate the human element of their lives from the professional. It involves finding the balance between grieving for the innocent victim of Ruggs’ actions and still keeping him close to their hearts.

“It broke my wife and I’s heart, honestly,” Carr said.

He also promised he won’t turn his back on Ruggs. “He needs to be loved,” Carr said. “If no one else will do it, I’ll do it.”

It also means Carr and the Raiders have to find a way to process their thoughts and feelings in a way that doesn’t take away from pushing forward in a season for which ambitious goals and objectives are very much in reach.

“Whether it’s fair or not, I have to compartmentalize,” Carr said. “I have a job to do.”

So do his 52 teammates. That started on Wednesday when they began preparations for their game against the New York Giants on Sunday.

Yet they also aren’t about to lose sight of the real victim in all of this, and that is 23-year-old Tina Tintor, who was killed early Tuesday morning.

“A person lost their life yesterday morning and we think it’s important to keep the focus on that as we talk about this tragic event,” Bisaccia said. “We’re deeply saddened for everyone affected, especially the victim’s family.”

That being said, “we love Henry Ruggs and we want him to know that,” Bisaccia said. “His terrible lapse in judgment of the most horrific kind. It’s something he will have to live with for the rest of his life.

“The gravity of the situation is not lost on anyone here.”