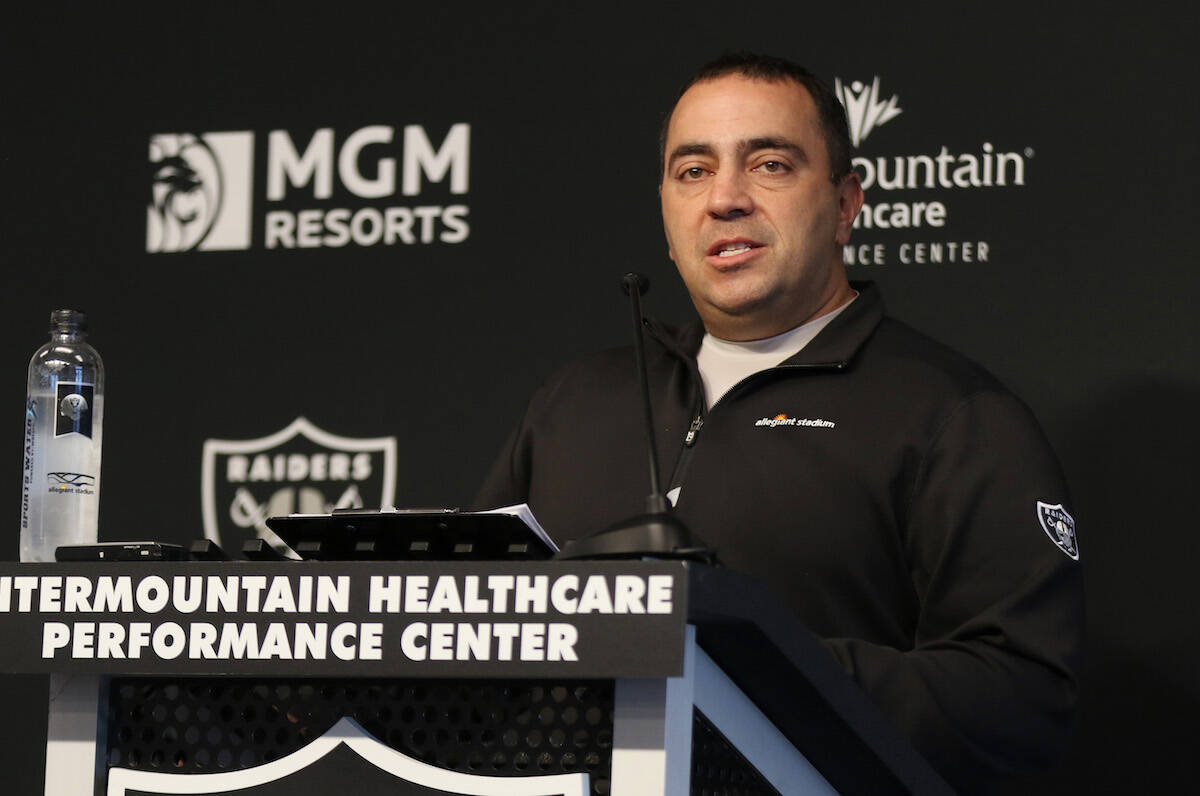 Dan Ventrelle is no longer with the team, owner Mark Davis announced Friday, and the former Raiders interim president said it’s because he tried to act as a whistleblower over the team’s working conditions.

In a statement released in the morning by the Raiders on Twitter, Davis said, “Dan Ventrelle is no longer with the Raiders organization. We will have no further comment at this time.”

However, Ventrelle told the Review-Journal on Friday afternoon that he was fired in retaliation for him alerting the NFL that Davis ignored concerns that there was a hostile-work environment within the organization.

“I have committed almost 18 years of my life to the success of the Raiders as General Counsel and President,” Ventrelle said in a texted statement. “I take that responsibility very seriously, which is why multiple written complaints from employees that Mark created a hostile work environment and engaged in other potential misconduct caused me grave concern.”

Ventrelle said when he confronted Davis about the issues that he was dismissive of them. So, Ventrelle took the matter to league officials.

“(He) did not demonstrate the warranted level of concern,” Ventrelle said. “Given this, I informed the NFL of these issues and of Mark’s unacceptable response. Soon thereafter, I was fired in retaliation for raising these concerns.”

The NFL through a spokesman said: “We recently became aware of these allegations and take them very seriously. We will promptly look into the matter.”

Despite his firing, Ventrelle said he remains determined to have these issues addressed within the Raiders.

“I firmly stand by my decision to elevate these issues to protect the organization and its female employees,” Ventrelle said. “I remain committed to doing everything in my power to support the Raiders and the Las Vegas community I now call home.”

When reached by the Review-Journal early Friday evening, Davis said: “I’ve heard about (Ventrelle’s) statement, but I won’t comment on it. The only thing I want made clear is that Dan Ventrelle was never president of the Raiders. He has always been the interim president. He was never named president.The interim was always a temporary designation to determine whether he would be the (full-time) president or not. I want that clear — he is not the president of the Las Vegas Raiders. Never was. I think there’s a misconception about that.”

When asked again for comment on Ventrelle’s allegations: “No, none at all.”

Ventrelle took over as the Raiders’ interim president last July after the club parted ways with long-time president Marc Badain. He had been with the club since 2003 and eventually rose to executive vice president and general counsel.

Ventrelle, along with Badain, played key roles in the relocation process that took the Raiders from Oakland to Las Vegas. His departure comes on the heels of the sudden announcement that Chief Operations and Analytics Officer Jeremy Aguero resigned Tuesday evening.

Aguero was hired by the Raiders in October, when he left his previous role as principal analyst with Applied Analysis after a 24-year stint. He said his departure is tied to taking a break and assessing his next career move.

“I informed (Raiders owner) Mark Davis of my resignation and the reasons behind it on Tuesday evening,” Aguero said in a text to the Review-Journal. “This is the first time in more than 30 years I have had no professional responsibilities. I look forward to taking some time off, with my family, as I determine my own future.”

Aguero did not respond to requests for comment about Ventrelle’s allegations.

Las Vegas Convention and Visitors Authority CEO and President Steve Hill, who also serves as chairman of the Las Vegas Stadium Authority board, highlighted what both Ventrelle and Aguero meant to the Raiders landing in Las Vegas.

“Over the last few days, there has clearly been upheaval within the Raiders organization,” Hill said in a statement. “As the Chairman of the Stadium Authority Board and CEO of the Las Vegas Convention & Visitors Authority, I worked closely with both Jeremy Aguero and Dan Ventrelle and commend them for the vital role they played in ensuring the successful move of the Raiders to Las Vegas and the construction of our spectacular Allegiant Stadium. “

Despite the recent turnover in the Raiders’ executive suite, Hill said all involved remain focused on building off the momentum of recent large sporting events in the area, including the NFL draft, the Pro Bowl and NHL All-Star game as well as next year’s Formula One’s Las Vegas Grand Prix.

“We will continue to work closely with our resort and community partners to ensure Allegiant Stadium’s ongoing success, hosting multiple world-class sports and entertainment events that have become a major economic driver for our state,” Hill said.

The last 12 months have seen tremendous upheaval within the Raiders’ organization, with the power structure on both the football and business sides of the building undergoing massive change.

Gruden resigned as head coach last October after multiple disparaging emails he sent over the years were made public. Mayock, who was Gruden’s hand-picked choice to head the Raiders personnel department, eventually was fired at the end of the season.

The decision to hire McDaniels and Ziegler as their replacements was seen as a departure in how the Raiders handled business. Neither had previous ties to the organization, which in the past almost had been a central qualification to being hired.

In addition, a number of different front-office staffers have been replaced since the move from Oakland to Las Vegas, with the Raiders seemingly using their landing in Nevada to push a reset button on the direction of the franchise.