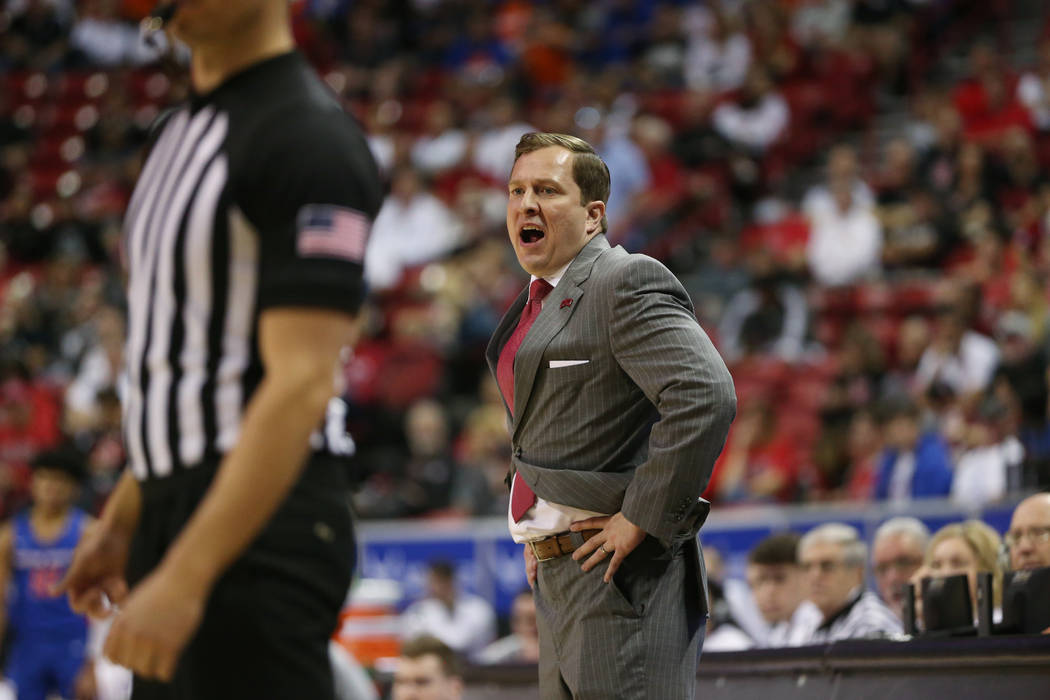 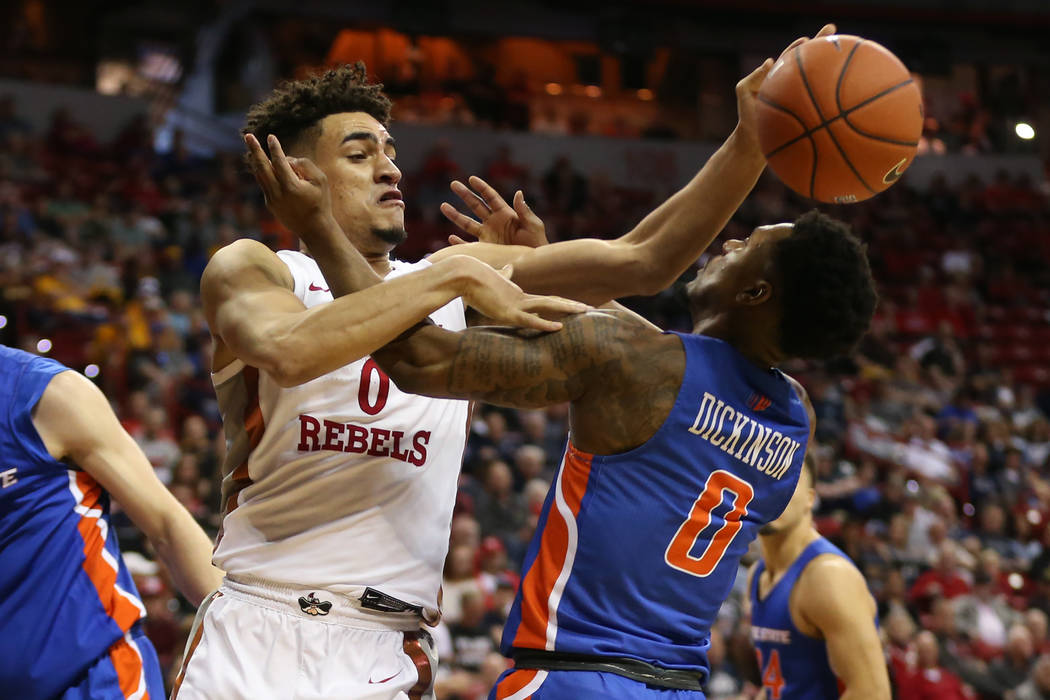 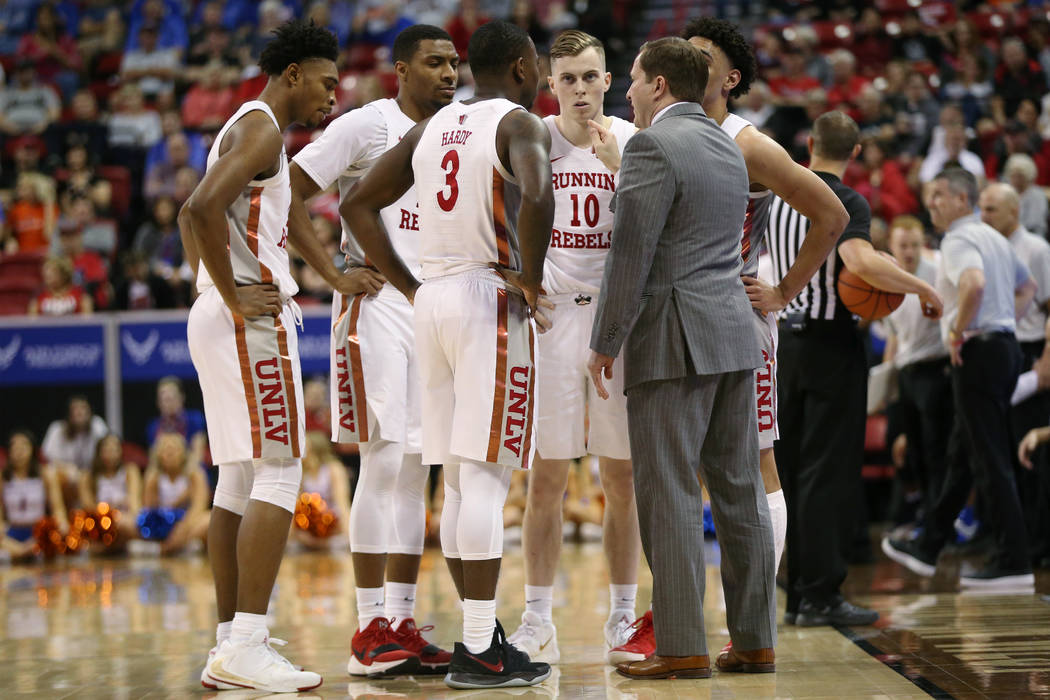 UNLV Rebels head coach T. J. Otzelberger talks to his team during a time out in the second half of the Mountain West tournament quarterfinal basketball game at the Thomas & Mack Center in Las Vegas, Thursday, March 5, 2020. (Erik Verduzco / Las Vegas Review-Journal) @Erik_Verduzco 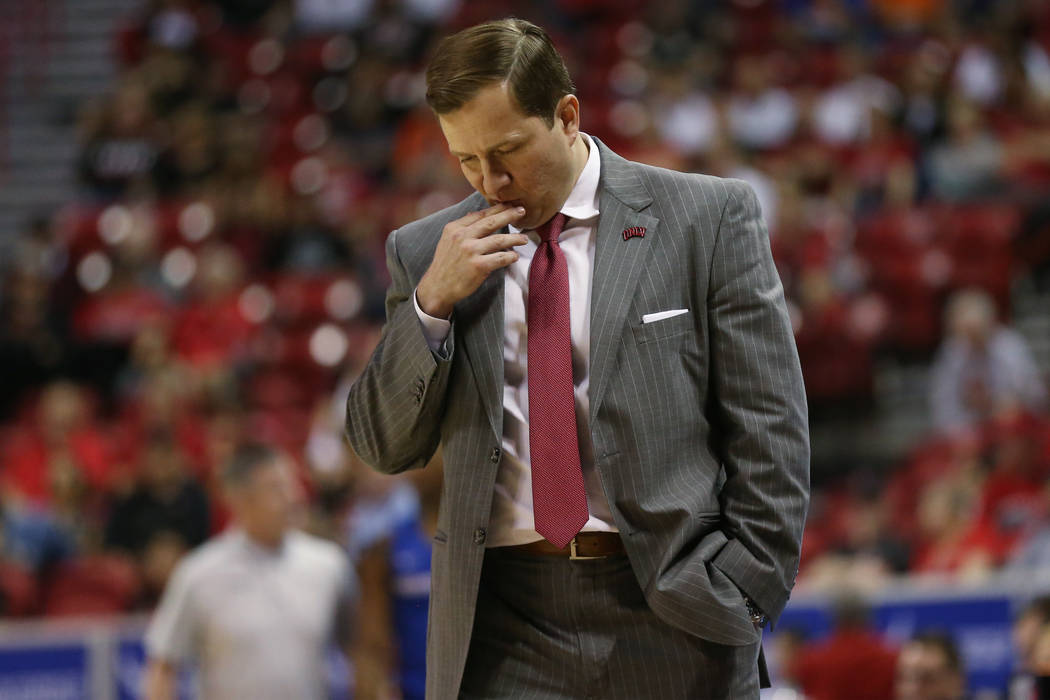 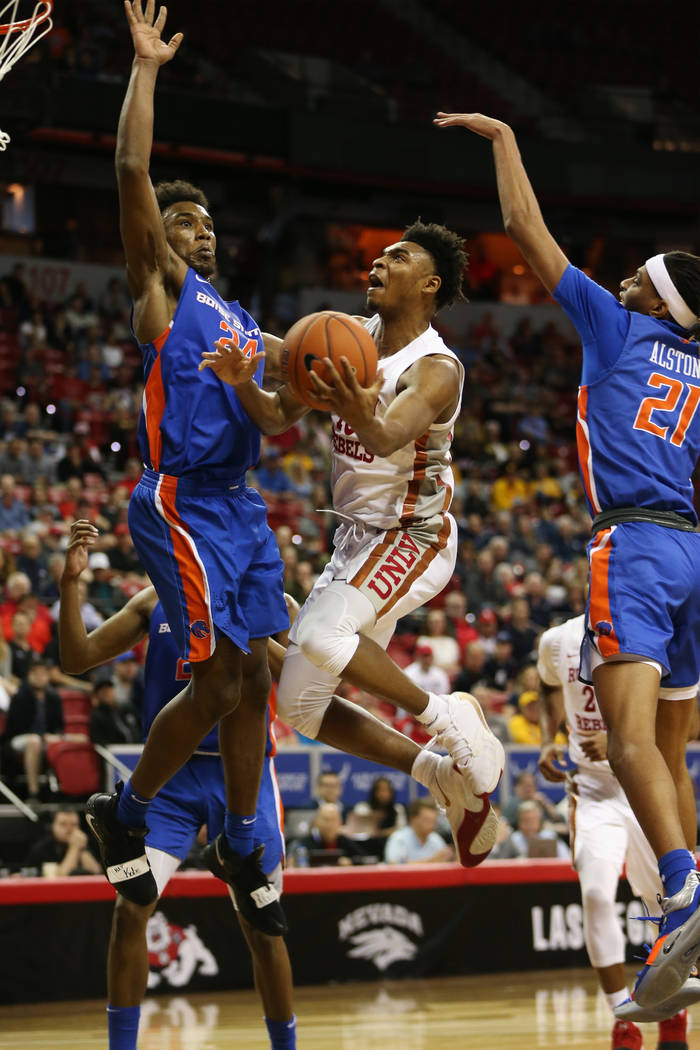 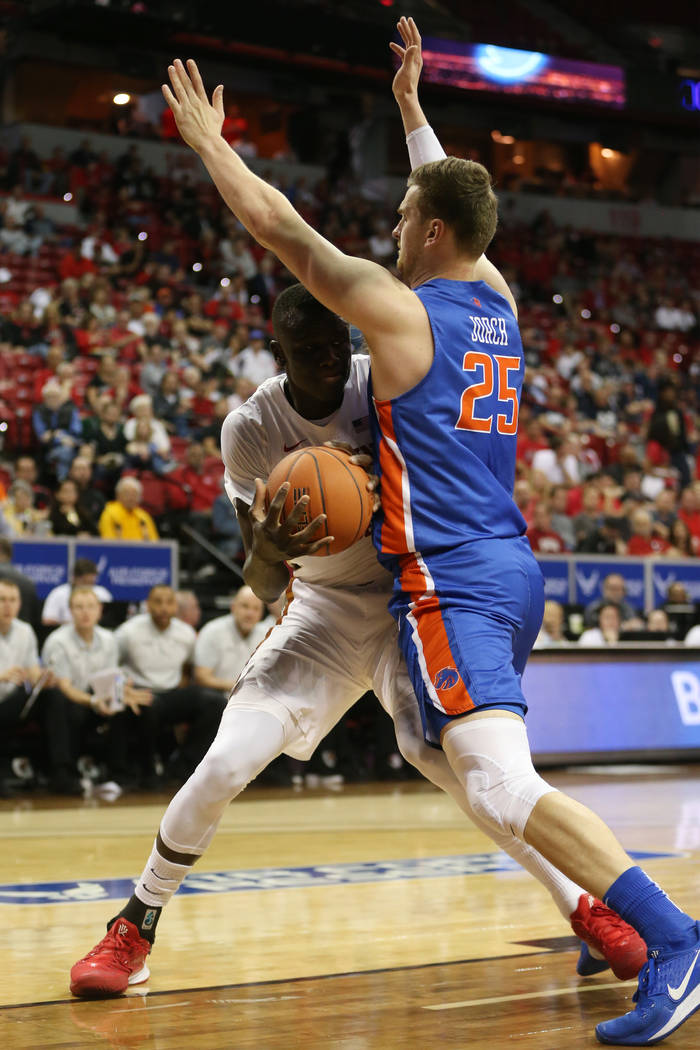 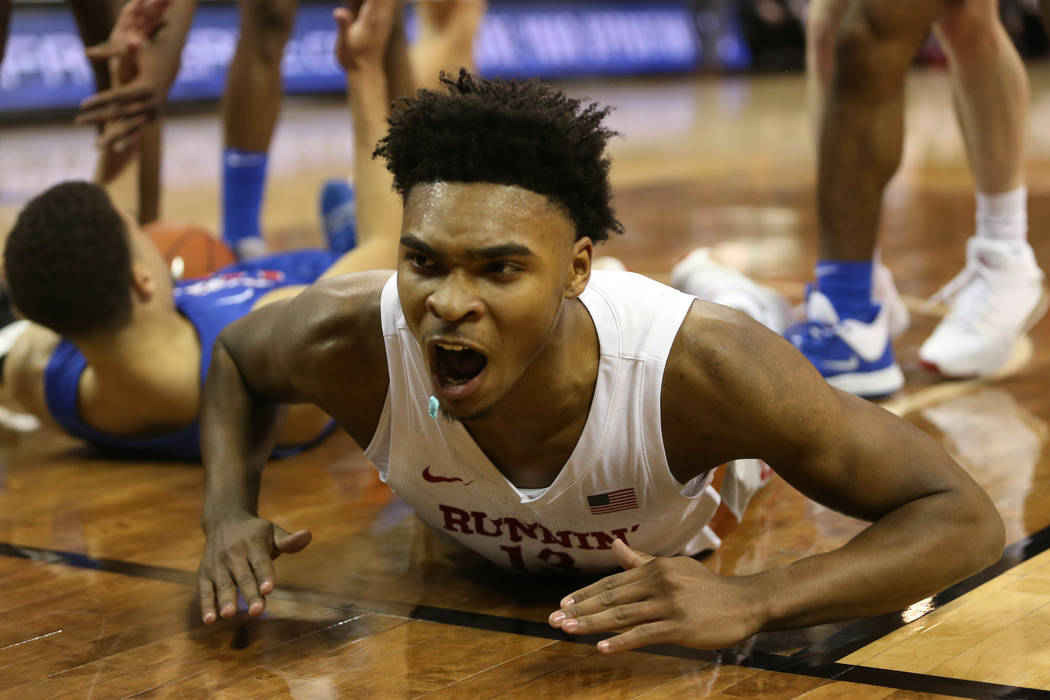 Two things that happened during the news conference following UNLV’s 67-61 loss to Boise State in the Mountain West tournament quarterfinals were scribbled into a notebook.

The first was that Rebels coach T.J. Otzelberger bumped fists with Rebels players Marvin Coleman and Bryce Hamilton as they left the dais. It probably had nothing to do with the coronavirus. But there seemed to be less handshaking at the Thomas & Mack Center than usual Thursday.

Then Otzelberger suggested what many at courtside had been saying during timeouts of a tedious game between the MWC’s number four and five seeds: That despite Elijah Mitrou-Long being UNLV’s best player down the stretch, his absence due to a knee bruise probably wasn’t what beat the slightly favored Rebels.

“We caught an unfortunate break with one of our key players who wasn’t able to play today,” the first-year coach said of the senior guard from Canada who averaged 17.6 points during the Rebels’ five-game winning streak that closed an up-and-down regular season.

“It’s certainly not an excuse because all year long we’ve had injuries and adversity, and we’ve bounced back from whatever situation presented itself.”

Perhaps he really believed that the absence of Mitrou-Long was not a legitimate excuse. Or maybe it was just Otzelberger being a stand-up guy and giving the other team its due.

Eight days before lining up against Boise in the conference clambake, UNLV had raked the Broncos over coals at the T&M. The final was 77-66, and it wasn’t nearly that close.

Mitrou-Long played 35 minutes and scored 16 points. He even made a free throw — more on that in a minute.

At one point, the Rebels led by 27 points.

Their biggest lead Thursday was 3-0 when Jonah Antonio sank one from beyond the 3-point stripe 14 seconds in. UNLV led for only 2 minutes, 32 seconds.

Coincidence? That’ll be up to those on social media to decide.

“Boise State played tremendous,” Otzelberger said when pressed about Mitrou-Long. “Do I wish we had Eli? Of course I do. What impact it had on the game, hard to say. Credit goes to them with the win.”

Shots in the dark

With Mitrou-Long sitting on the end of the bench in a white pullover, the Rebels’ offense consisted mostly of Hamilton and Hardy taking indiscriminate shots, and the other Rebels standing around as errant flings clanged off the rim or thudded off the backboard.

After sinking 51 percent of their field goals against the Broncos last week, the Rebels made just 31.6 percent Thursday. They were equally challenged at the free-throw line, hitting 16 of 26 for 61 percent.

When UNLV was clawing hard to stay in the game, Hardy shot an air ball from the foul line.

Boise State made 22 of its 29 free throws. With RJ Williams and Derrick Alston pounding the boards like home improvement carpenters and Justin Jessup sinking perimeter jumpers or clutch free throws whenever one was required, the Broncos deservedly advanced to a Friday night semifinal matchup against 29-1 San Diego State.

Provided the Rebels are done playing — somebody asked Otzelberger about a long-shot NIT bid which he more or less dismissed — UNLV finishes his first season at 17-15. That’s a half-game worse than last season’s record that got Marvin Menzies fired after just three seasons.

But after struggling early as most rebuilding teams do, the Rebels seemed to find a stride that would have impressed a long-distance runner. They also beat San Diego State, and so far they’re the only ones who can say that.

The stunning road win, combined with the down-the-stretch success and a grittiness the team showed after — to use Hamilton’s term — some “come-to-Jesus” soul-searching after a 4-8 start is a nice nail upon which a first-year coach can hang his hat.

“As far as our team and where we’re at moving forward, I’m excited to get started on next season,” Otzelberger said after the news conference fist-bumping. “I know our guys may not quite be ready for this, and in some ways maybe I’m not, but I want to start practice tomorrow.”